Death of the desert - China Dialogue
Skip to content

It’s the final day of August, and after walking for an hour into the Tengger desert from the Inner Mongolian town of Elisi, in the distance I can see waste water pits hidden among the dunes. The stench makes it difficult to breathe.

The rectangular pits, each the size of several football fields, lie side-by-side in the desert, walled with concrete and surrounded by green fencing as tall as a man. Ink-black water is being pumped into two pits, while two more are filled with black, yellow and dark red muds thinned with sand and lime. 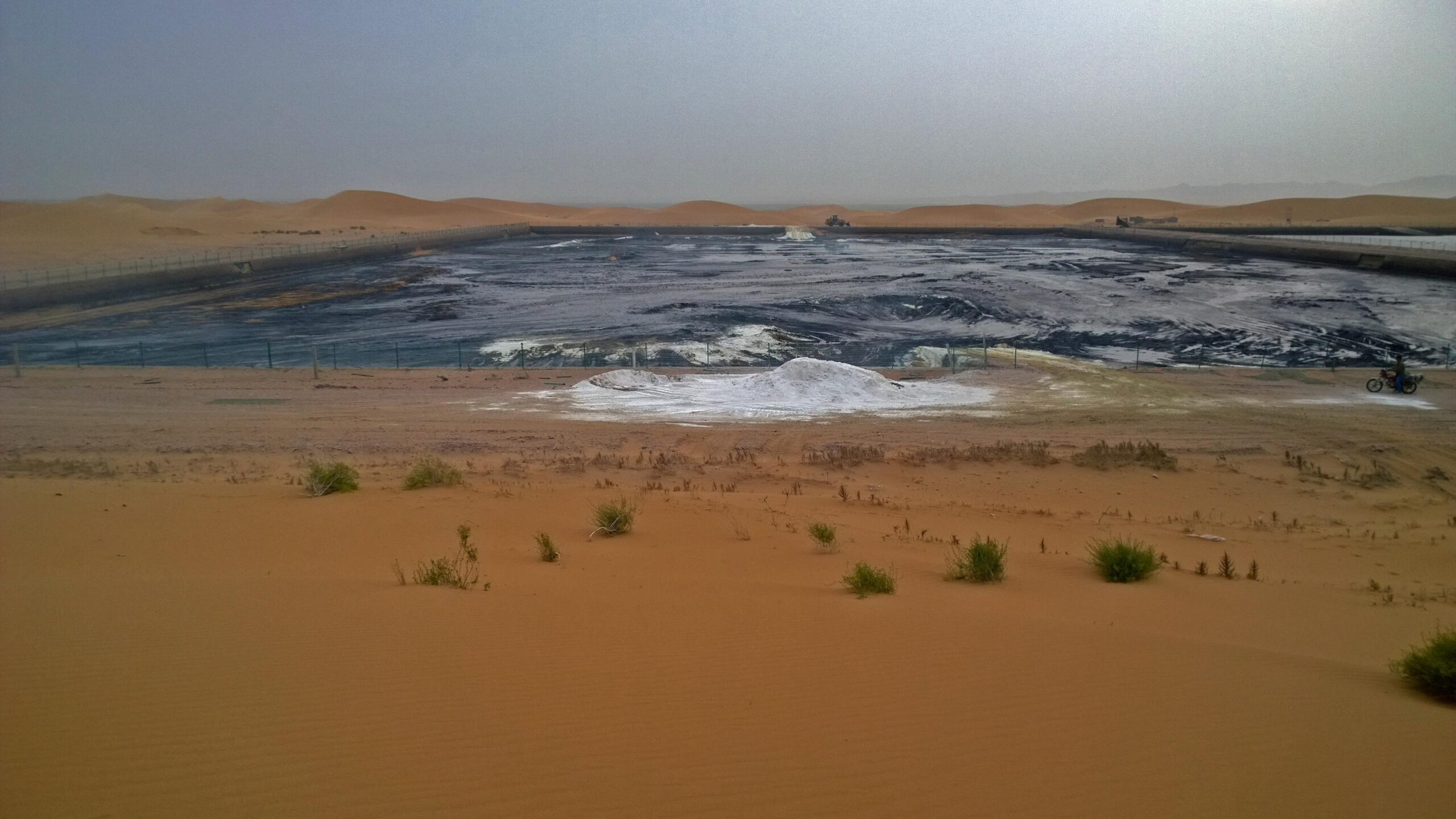 August 31. After walking for an hour into the Tengger Desert outside of the town of Elisi in Inner Mongolia’s Alxa Left Banner, the waste water pits hidden among the dunes come into view – and the stench makes it difficult to breathe.

An oasis deep in the desert, once a source of saltpeter (otherwise known as sodium nitrate or potassium nitrate that is used in fertiliser and the chemicals industry) has been abandoned due to industrial pollution. 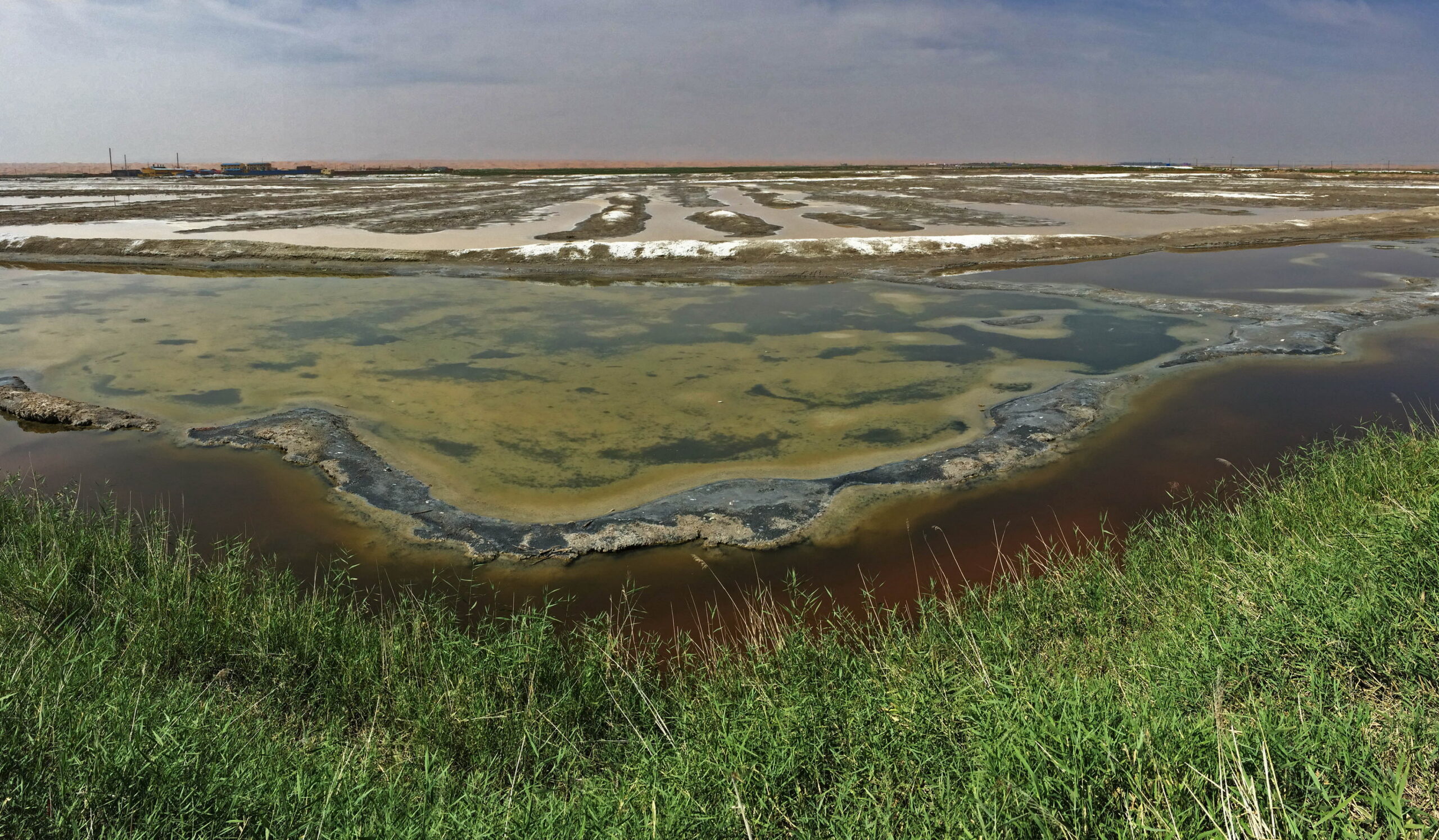 An oasis deep in the desert, once a source of saltpetre, has been abandoned due to industrial pollution.

Once untreated waste water evaporates, the resulting sludge is removed by diggers and dumped in the desert. 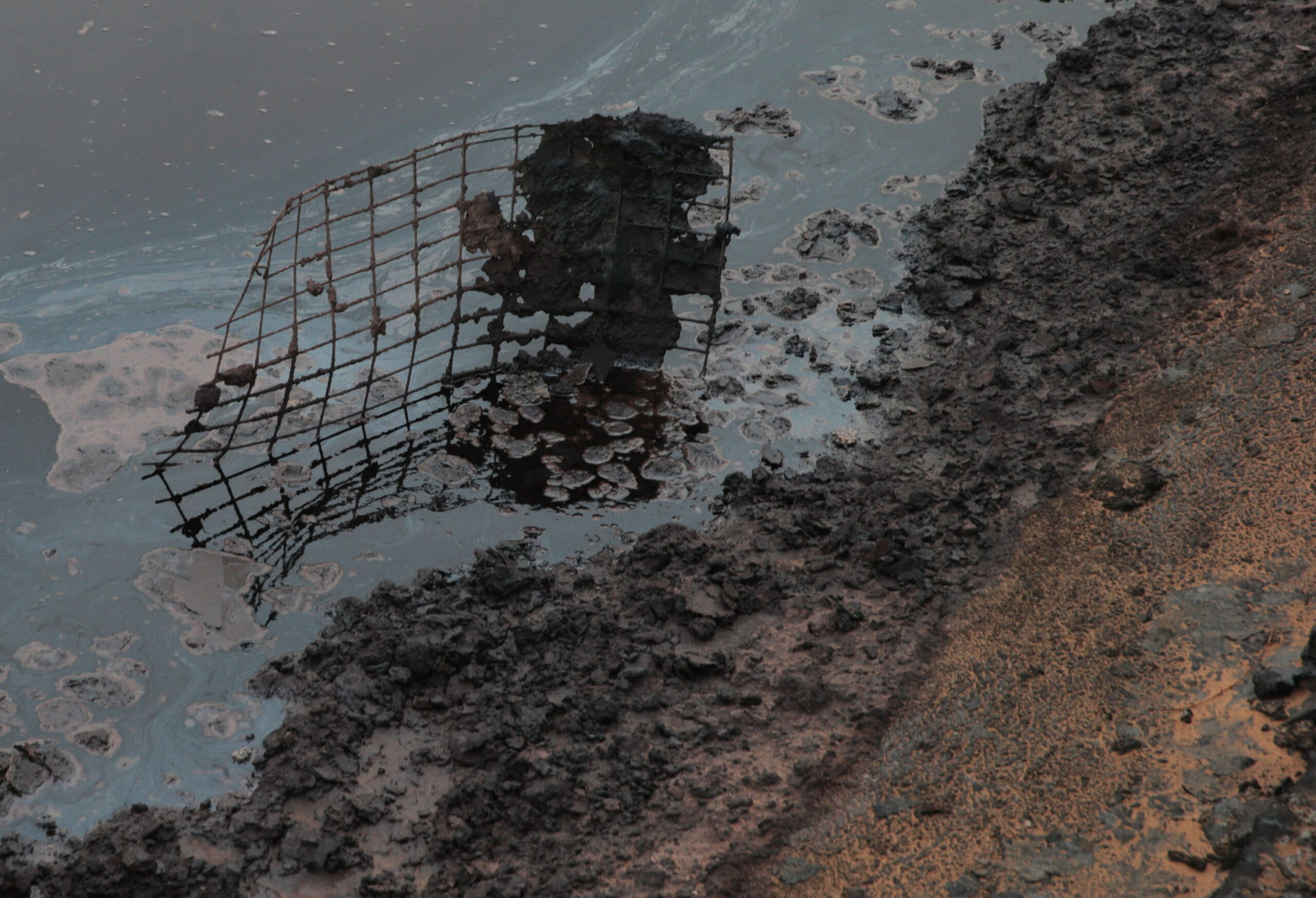 The sludge left behind after untreated waste water is left to evaporate is removed by diggers and dumped in the desert.

A small lake has been turned into a tourist attraction. But groundwater extraction means the lake is shrinking. 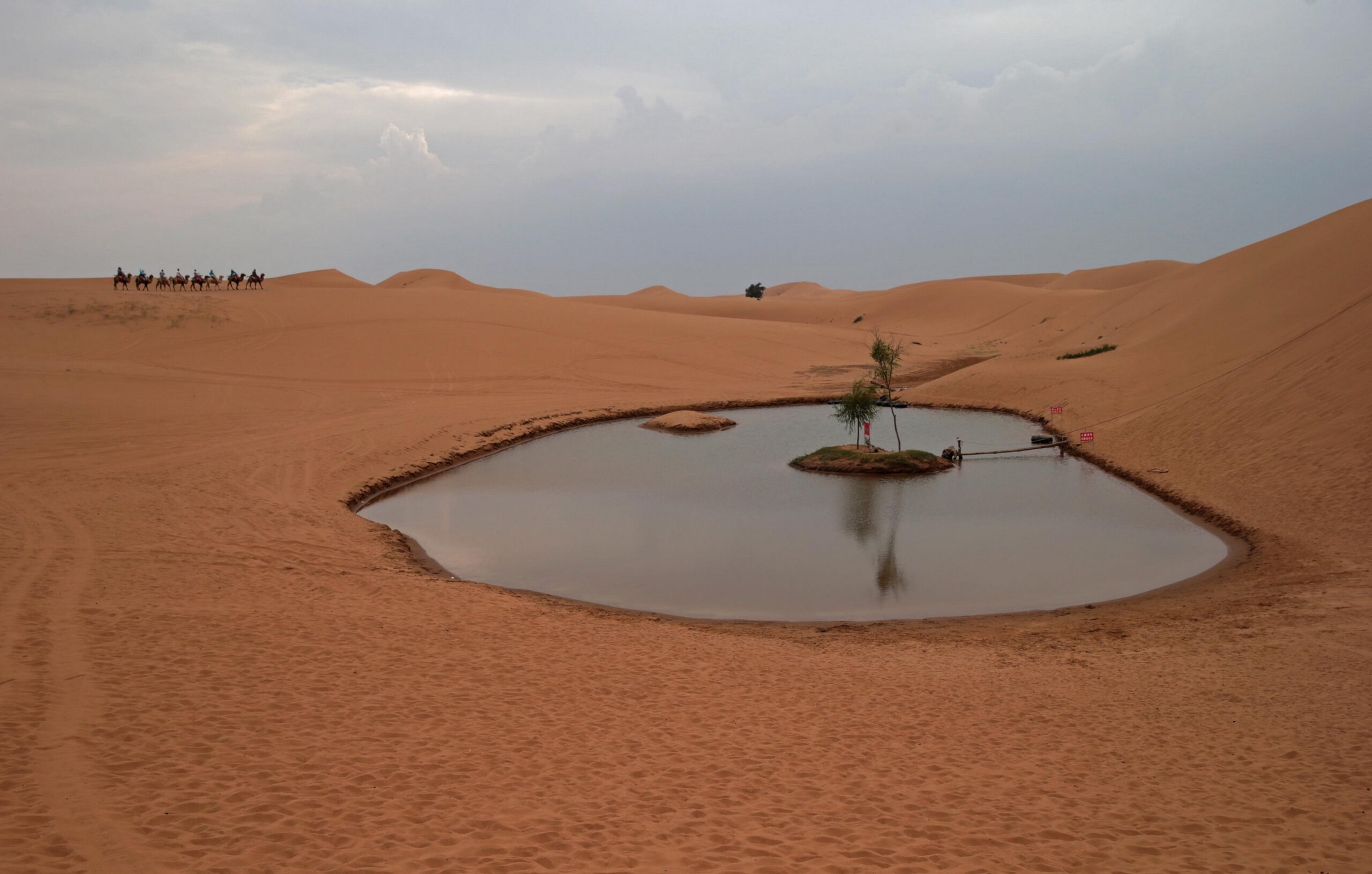 A small lake in the desert has been turned into a tourist attraction. But groundwater extraction means the lake is shrinking.

In the heart of the Tengger, on the border between Alxa Left Banner in Inner Mongolia and Zhongwei, Ningxia province, lie the remnants of lakes that date back to the Tertiary geological period. Groundwater is plentiful here, many protected species of vegetation are found growing on the surface, and the local herders make their homes nearby. It is only eight kilometres from the Yellow River, one of China’s largest.

“Tengger” is the Mongolian word for “sky” – a name chosen as the desert is seemingly as vast and endless as the heavens above. But hidden deep in this huge desert I found sprawling pits used for treating polluted water.

On the late afternoon of August 31, the blue skies and white clouds above Elisi are a pleasure to the eye. But enjoyment of this view is spoiled by a foul odour. I walked into a shop to ask where it was coming from and the owner pointed to metal storage tanks at chemical plants off in the distance: “From the factories,” he said. “They dump untreated waste water in the desert.”

Both Inner Mongolia and Ningxia have built industrial zones deep in the Tengger, with numerous chemical firms setting up shop. Locals complain these companies are extracting groundwater to use during manufacturing, then dumping untreated waste water into the desert area.

I was told that if I drove eight kilometres north out of town, then three more kilometres east into the desert, I’d find one of those dumping grounds. But the industrial zone had motorbike patrols operating to make sure locals or any unknown outsiders stayed away. Luckily it was a weekend and, my source said, there might not be anyone on duty in the evening.

At 6pm I walked into the desert in search of the source of that ever-worsening smell. One hour and several sand dunes later, the view opened out – and the smell became almost suffocating. The rectangular pits, each the size of several football fields, lie side by side in the desert and are walled with concrete and surrounded by green fencing as tall as a man. Ink-black water was being pumped into two pits, while two others were filled with black, yellow and dark red muds thinned with sand and lime. A bulldozer sat beside the pits, and white smoke hung in the air above. 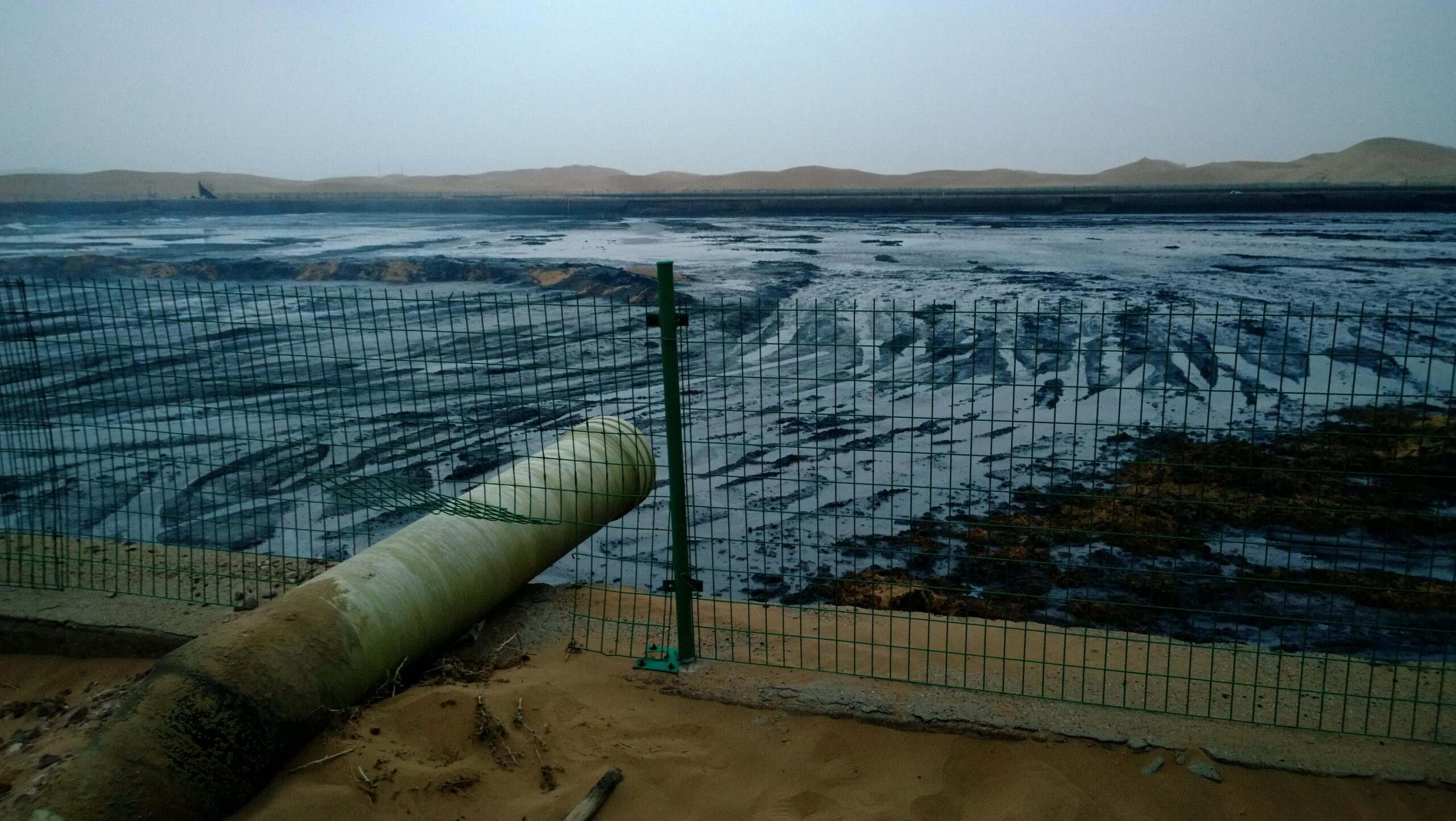 The rectangular pits, each the size of several football fields, lie side by side in the desert, walled with concrete and surrounded by green fencing as tall as a man. Ink-black water is being pumped into two pits, while two more are filled with black, yellow and dark red muds thinned with sand and lime.

Each pit was fed by up to several white fibreglass pipes coming across the desert from the direction of the industrial zone, about one kilometre away across the sand. As I walked towards the industrial zone I often saw the pipes exposed through the sand. Black rubber tubes fed directly into the sand in some hollows, and the sand around those pipes has turned black. Kicking away the crust exposed a dark and foul-smelling coagulated mass.

Drive about 10 kilometres northeast of Elisi and you find yourself within the borders of the Ningxia city of Zhongwei, amidst rolling desert. Around 100 metres from the road lies a depression about the size of a football pitch, filled with stinking effluent, with several bulldozers busy filling it in with sand. Workers installing crash barriers on the road were all wearing masks – they said there are a number of sites like that nearby, and if you don’t protect your face you’ll soon end up suffering headaches and a sore throat.

The village of Temowula lies closest to the chemical plants – the nearest residents are less than one kilometre away. When I visited, Bateer, 20, was using a solar-powered pump to fill a leather bladder with water, in order to water vegetables he grows some distance further off. Bateer lives near the source of the Tengger’s water. Years back you could drill down a few metres and hit water here – now you need to go at least 40 metres deep. 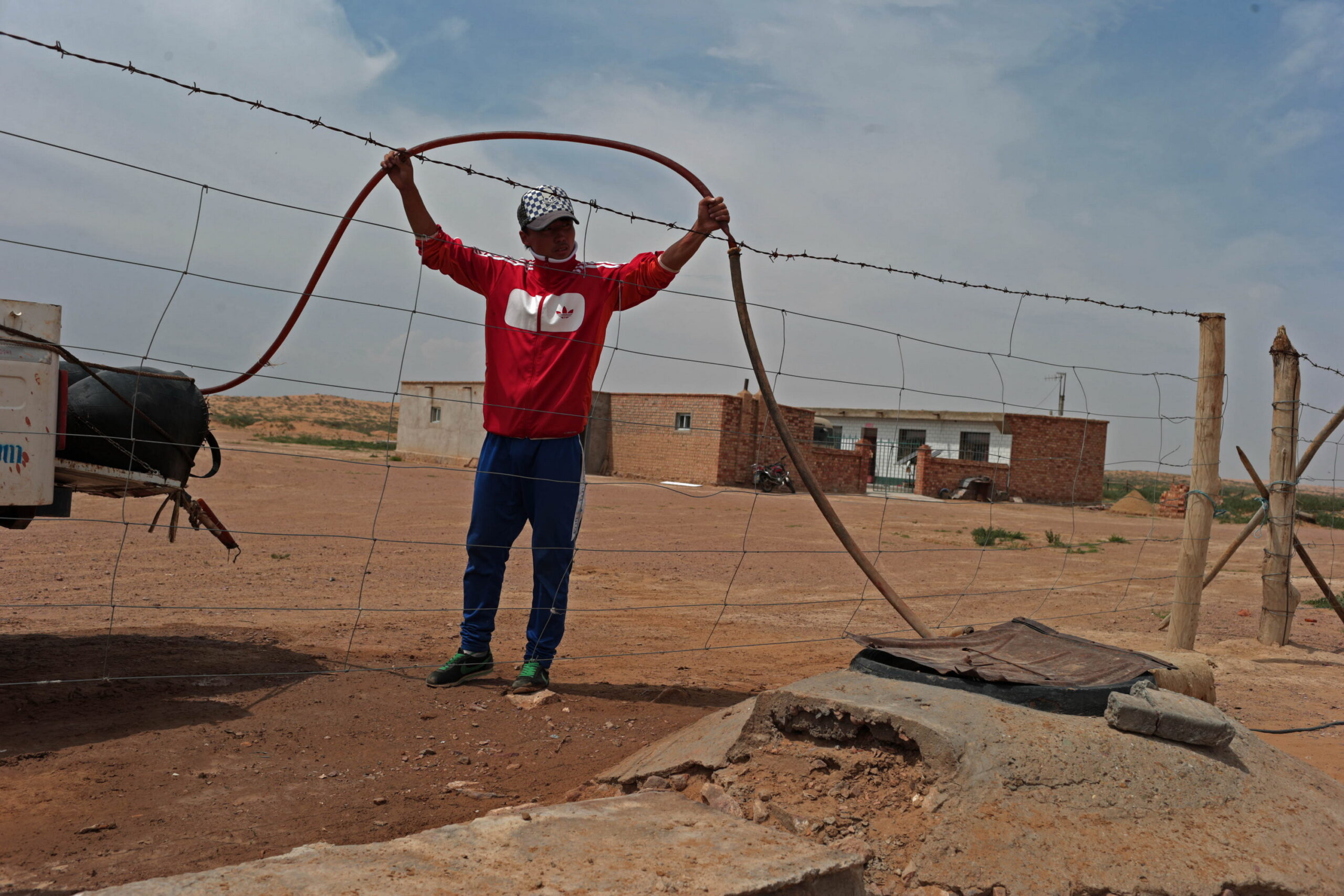 Bateer lives where the Tengger Desert’s water originates from. Years back you could drill a few meters down and hit water – now you need to go down at least 40 meters.

Bateer says he plans to leave – the air is no longer clean, and excessive groundwater extraction by the chemical plants means water levels in the wells is lower every year. He is currently a first year university student in Hohhot, and has returned home for the summer holidays to help his parents look after the sheep and camels, among other types of subsistence. He just wants to get away from the pollution at home and stay in the city.

A source told me there are about forty 180-metre-deep wells in the desert around Elisi, all supplying water to the chemical plants. I saw one well, numbered 31, marked as being the ‘water supply for Qinghua Refined Chemicals Park’. My source pointed out power lines running out into the desert – each one leads to a similar well. Every year the number and the depth of the wells increases.

Liu Shurun, a well-known botanist and grasslands ecologist, is a professor of ecology at Inner Mongolia Normal University. He warns that “as soon as groundwater becomes polluted, we don’t just lose the habitats that have supported herders for generations – worse, we put the unique ecosystem of the Tengger, China’s fourth-largest desert, at grave risk.” And, he adds, once groundwater is polluted it’s next to impossible to clean up.

Editor’s note: In 2014 Chen Jie quit as photography editor at the Beijing News and returned to frontline photojournalism. Less than six months later he had completed seven pieces on the environment. One of these, Death of the desert, an exclusive on Tengger desert pollution, prompted Chinese president Xi Jinping to issue three separate memos, with the State Council forming an investigation team and dozens of officials in Inner Mongolia losing their jobs or being punished.

China uses drones to monitor pollution problem from above