A dilapidated wooden fishing boat laden down with animals who are just skin and bone, a sort of dystopian Noah’s ark trying to escape the end of the earth and an empty city devoid of human life that has been overtaken by nature.

These nightmarish scenes are not science fiction but part of a new art exhibition by one of China’s most famous artists, Cai Guo-Qiang. The exhibition by New York-based Cai aims to shed light on China’s environmental problems.

Cai said he likes to look at issues within a society and express them in his art. “Chinese people have access to most things except clean air so I have a sense of how severe environmental problems are in this country,” he said.

Upon entering the Power Station of Art in Shanghai, visitors come across the massive installation The Ninth Wave, also the title of the exhibition. It is a towering fishing boat with 99 fabricated animals on board. The boat comes from the artist’s home town, Quanzhou in Fujian province. The inspiration for the piece came from the incident last year of 16,000 dead pigs found floating in the Huangpu River.

Cai had planned for the fishing boat installation to sail from Quanzhou to Shanghai but failed to get all of the permissions necessary. He said that he has had to play “hide and seek a little” with the authorities because his subject matter is a sensitive topic in China. “Of course there are occasions where I encounter resistance from the authorities,” he said. He had also hoped to sail the boat along the Huangpu River in Shanghai but permission for this was refused and instead it was brought along the river on a barge.

The museum, a former power station, along with the air quality and smog in China also influenced some of Cai’s works for the exhibition. 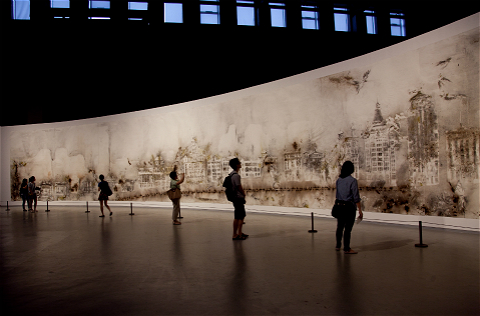 Installation of the Bund Without Us at the Power Station of Art, Shanghai  (Photograph courtesy of Cai Studio)

Another piece in the exhibition, The Bund Without Us is a huge work that was made using gunpowder which was then exploded to blur the famous Shanghai skyline. It represents the city of Shanghai with no human life and has been overtaken by nature.

In the piece Cai uses animal and plant motifs, references to traditional Chinese forms of artwork which allude to a time when people lived in harmony with nature. “In ancient times, people were more respectful of the environment. The problems we have now are a symptom of the times where people are more aggressive and materialistic and are exploiting nature’s resources to make money for their own means,” Cai said.

Cai has a fondness for making a bang, literally, often working with fireworks and other explosive materials. The exhibition kicked off with what the artist called a “large-scale explosion event” using coloured smoke pyrotechnic effects. Called Elegy, the display projects an image of nature in decline.

Ironically the pyrotechnic display garnered some concerns from the Chinese public. On the Chinese social media site Weibo, some users expressed alarm at the explosions and others said they were concerned about pollution from the smoke. However, Cai’s PR team said that environmentally safe products were used including food colouring, fabric dyes and other non-toxic materials.

A version of this article was first published on The Guardian as part of the Guardian Environment Network.

Cai Guo-Qiang: The Ninth Wave takes place at the Power Station of Art in Shanghai until 26 October.