The mighty Mekong has always beguiled explorers and travellers with its swirling rapids, rocky inlets and dotted islets. Currents, reefs and rocks have repeatedly thwarted attempts at smooth navigation since French colonial times, when explorers hoped to open up a lucrative backdoor trade route to tap China’s vast markets.

But today the natural landscape and the rich biodiversity of this great river are under threat from a plan to demolish the rocks and islets.
​
Kobsak Pootrakool, a deputy minister at the Thai Prime Minister’s office, told media that China, Laos, Myanmar and Thailand will set up a team to survey the river. “It is necessary to make way for navigational improvements in the river to make it passable for 500-tonne ships, for the safety of goods and transport of people, as well as reducing risk from accidents,” Kobsak said. 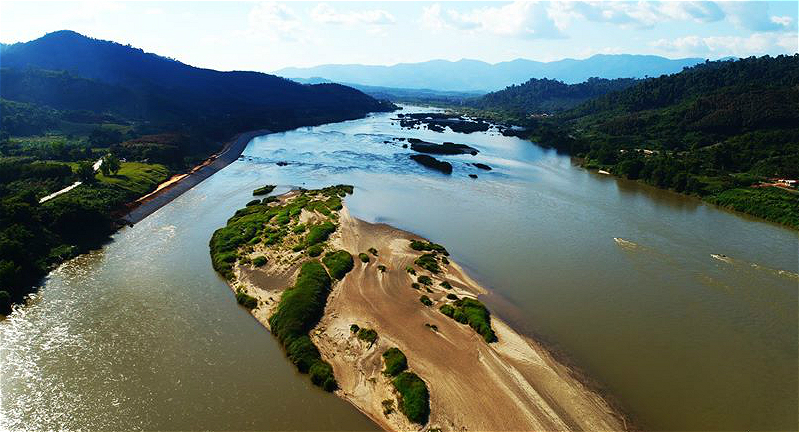 The “Development Plan for International Navigation on the Lancang-Mekong River (2015-2025)” was approved in December, and has three phases: an initial survey, design, and environmental and social impact assessments.

The plan requires the Thai authorities to implement the rock-blasting along a 1.6 kilometre stretch of the Mekong border with Laos, to enable much larger cargo boats to travel from Yunnan province (where the river is called the Lancang) to the ancient Lao capital of Luang Prabang, a picturesque World Heritage site 630 kilometres downstream. However, Thai authorities say this cannot be approved until the survey and environmental impact assessment (EIA) have been completed.

Environmentalists are outraged by the project. Pianporn Deetes, the Thai campaigns director for International Rivers, said, “It is nonsense to exchange the world’s best river [which hosts] inland fisheries feeding over 60 million people for commercial [transport of goods] that could easily come by road.”

Chinese experts say there is no evidence yet that the plan will harm the river’s ecology. Zhu Zhenming, a professor of the Yunnan Academy of Social Sciences and an expert on Southeast Asia, told Xinhua that opponents should wait until thorough environmental impact studies have been carried out before passing judgement. As for the potential threat to fish populations, Zhu said similar instances of clearing rocks and islets in Yunnan province had not caused major problems.

This claim is disputed by International Rivers, a US-based conservation group. The NGO has documented many benefits that local people derive from the islets rapids and fisheries.

“Rapids and reefs comprise some of the most productive riverine habitats, serving as vital breeding grounds and safe haven for fish. Blasting of the rapids would threaten the income and food security of villagers living in the area,” states their briefing on the project.

The strategy behind the recent plan dates to 1992 when the Asian Development Bank initiated a US$40 billion (275 billion yuan) programme to bring superhighways, power transmission grids, large dams, and mass tourism to the Greater Mekong sub-region.

China’s plan to dredge the river to allow commercial shipping kicked-off when the Commercial Navigation Agreement was signed by China, Laos, Burma and Thailand in April 2000, with the approval of a three-phase plan. Cambodia and Vietnam were not consulted.

The first phase involved blasting eleven rapids and ten reefs in the river, to enable vessels weighing between 100-150 tonnes to reach the Thai port of Chiang Saen from Yunnan. In 2002, Thai Prime Minister Thaksin Shinawatra permitted the rock-blasting to proceed.

However, China’s environmental impact assessment on the blasting lacked almost any data on fish and ecology, and was rejected after an independent assessment by the Mekong River Commission (MRC). The MRC is an inter-government body set up to manage the international river, comprising Thailand, Vietnam, Cambodia and Laos.

In 2003, China suspended rock blasting plans beyond phase one, after Thailand’s Ministry of Defence objected that more blasting would also upset the Thai-Laos Mekong boundary demarcation that runs along the middle of the river.

In December 2016, the old agreement was finally revived, but with a new survey proposed by the Thai cabinet. 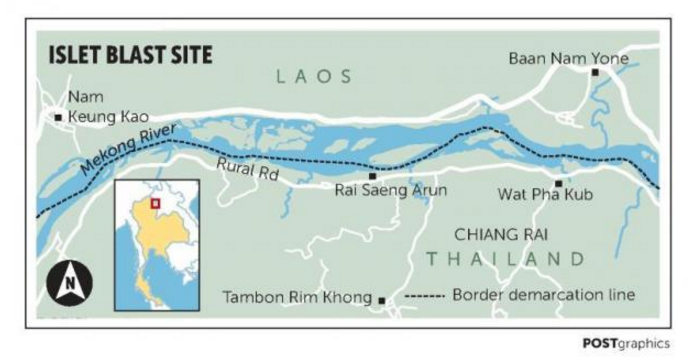 While the four MRC countries have generally endorsed the strategy of greater economic integration and improved Mekong navigation, justified by potential trade and tourism benefits, a full account of economic losses and environmental harm has yet to be undertaken.

Author and Mekong historian Milton Osborne has noted, that “the benefits of the increase of navigation on the Mekong between southern Yunnan and northern Thailand are currently overwhelmingly in China’s favour.”

Thailand’s Niwat Roykaew, head of the Rak Chiang Khong, a local community network based in Chiang Khong, argues that goods can now be transported easily via the R3A Highway from China to Thailand. Although Thai officials claim that shipping would reduce costs by 20% compared with road transport, Saowaruj Rattanakhamfu, a senior economist at the Thailand Development Research Institute, was deeply sceptical about the project’s benefits.

“As an economist, I don’t think it’s sensible to blow up those rocks to serve commercial trade in the river. The government should study whether it is really worth the investment as the project will have an immense impact on the poor,” he said.

Critics also claim that the UNESCO World Heritage site of Luang Prabang, a major eco-tourist draw in the region, would soon find itself transformed into a busy and increasingly polluted Chinese trading hub, destroying its famed charm and serenity. Others argue the growth in shipping will bring more tourists and greater prosperity to the region.

Crisis on the Mekong

The prospect of further rock demolition would be another serious blow to Southeast Asia’s most important river, already reeling from the cumulative environmental damage inflicted by mega-dam constructions.

A cascade of seven Chinese dams has been built on the Upper Mekong (the Lancang) in Yunnan. Two dams are now under construction in Laos on the Lower Mekong with a third at Pak Beng in Laos scheduled to be launched in 2017.

The hydrology of the river has suffered major changes. The annual flood pulse during the monsoon season has been seriously disrupted by reduced water flow.

Nutrient rich sediment has been cumulatively trapped behind more and more dam walls, thus starving the delta in Vietnam. Scientists monitoring the delta report that it is both shrinking and sinking.

The consultant report by the 2010 Strategic Environment Assessment report on the impacts of Mekong dams recommended a 10 year moratorium on all hydropower construction.

Since that landmark report two dams, the Xayaburi and the Don Sahong, have been launched on the Lower Mekong in Laos, despite the overwhelming opposition from riverine communities and warnings from concerned scientists.

WWF recently issued a report warning that the rush to build a cascade of 11 dams on the Lower Mekong was a clear example of “unsustainable development pushing the river system to the brink.” 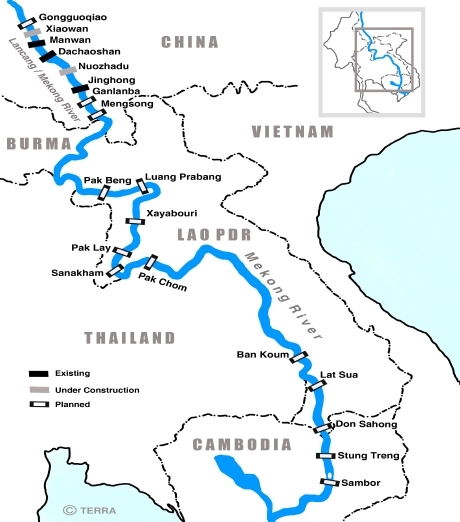 MRC data has revealed that the world’s most important inland fisheries are a key part of that Mekong economy. Wild capture fisheries in the four MRC countries provide a total value of US$ 11 billion (75 billion yuan). The inclusion of fish farming increases the value to US$17 billion (117 billion yuan). The absence of effective river governance puts the food security of 60 million people living in this basin at risk.

In Vietnam, the Mekong delta produces 50% of the country’s staple food crops and 90% of its rice exports. Nguyen Huu Thien, a highly respected wetlands ecologist, is worried that unless current trends are reversed, his country will lose its delta.

“If all 11 dams are built on the [lower] Mekong, Vietnam will cease to be the world’s second biggest rice exporter. The delta will sink from lack of sediment. In 20-30 years the delta will not be able to sustain its 18 million population. They will be forced to flee. It will cause instability and refugees.”

Hundreds of Thai NGOs are mobilising a campaign to save the ecologically precious islets and rapids at Khon Pi Luang. Campaign leader Niwat Roykaew filed a petition with the National Human Rights Commission (NHRC) to challenge the cabinet ruling.

The Thai Marine Department say that with the recent cabinet approval, they can start the survey, but not yet demolish the islets.

NHRC member Tuenjai Deetes said the rights of the local people have been violated as they have no access to information and do not have a say on the project, which could affect their livelihood.

The only way forward is for Mekong countries to move beyond “the small-pond mentality” according to Vietnamese director of Hanoi’s Institute of Economics, Tran Ding Thien. “This small-pond mentality” cannot grasp the bigger picture of sharing water resources and respecting the whole river.”