Yaoyao, an eight-year-old Beijing girl, has been learning how to sort rubbish at school. Back at home she excitedly asks her parents to separate food waste, recyclables, and non-recyclables and to place each in the correct communal bin outside. But the next morning those different bins all get tipped into a single bin lorry – leaving her confused.

China has been trying to encourage waste sorting for almost twenty years but with little success. It is still much more common for waste to be thrown away unsorted and for scavengers to go through it and separate anything that can be commercially recycled. Landfill remains the commonest destination for waste collected through the formal waste disposal system.

But this may be set to change. In March this year the State Council issued a plan to make sorting of domestic waste compulsory. Produced by the National Development and Reform Commission and the Ministry of Housing and Urban-Rural Development, it would put in place legislation and standards for waste sorting by the end of 2020, piloting compulsory sorting in ten or more cities before other cities followed suit.

Public debate over China’s landfill crisis often centres on the question of “character” and the popular perception that awareness of waste as a problem and the motivation to sort it has not been adequately cultivated in citizens. But many households that would like to sort waste find that the collection system lets them down.

Many have the same concerns as Yaoyao and her family. Categorisation of waste needs maintaining from the moment it is binned, through to collection, transportation and then disposal – a failure in the chain makes it all pointless. But a lack of transparency about how waste is dealt with and failures at the collection and transportation stages make sorting rubbish seem like a waste of time.

Meanwhile, the informal recycling sector still collects huge amounts of waste, with individual collectors even having regular arrangements with building and apartment complex managers. Although these collectors sort waste to sell it on, inappropriate handling still results in secondary pollution.

Wu Ka-ming, assistant professor at the Department of Cultural and Religious Studies at the Chinese University of Hong Kong, has carried out an anthropological study of a scavenger community on the outskirts of Beijing. She told chinadialogue that the government has long tried to regulate individuals working in the informal sector, but with little success.

To get to grips with problems in the formal sector, as early as 2000, eight cities, including Beijing, Shanghai, Guangzhou and Shenzhen were designated as trial waste sorting cities. Advertising, environmental education, and other supporting measures were all used to encourage action.

But Liu Jianguo, a professor at Tsinghua University’s School of the Environment, says that waste sorting has been ineffective because of a lack of sustained public participation. And in this respect China lags far behind other nations.

What is clear is that it isn’t just a matter of national character; structural problems seem just as important. China’s cities have expanded, people are consuming more, and existing waste disposal systems are struggling to cope.

Data from the Ministry of Environmental Protection shows that China’s 246 medium and large sized cities produced 185,600 tonnes of waste in 2015. Divided into 2.5 tonne loads, this would fill a line of lorries 504,000 miles long, stretching 12 times around the equator.

Given the growth in rubbish, a new approach to disposal is needed.

Liu thinks that waste sorting won’t reduce quantities of waste alone but it will help. For example, if food waste is separated and moisture removed before transportation, its weight can be cut by half – making transportation easier and saving large amounts of space. More specific sorting of other categories of waste can also increase disposal and recycling efficiency.

Another benefit of sorting is that it can encourage residents to adopt greener lifestyle habits, reduce consumption and therefore waste. 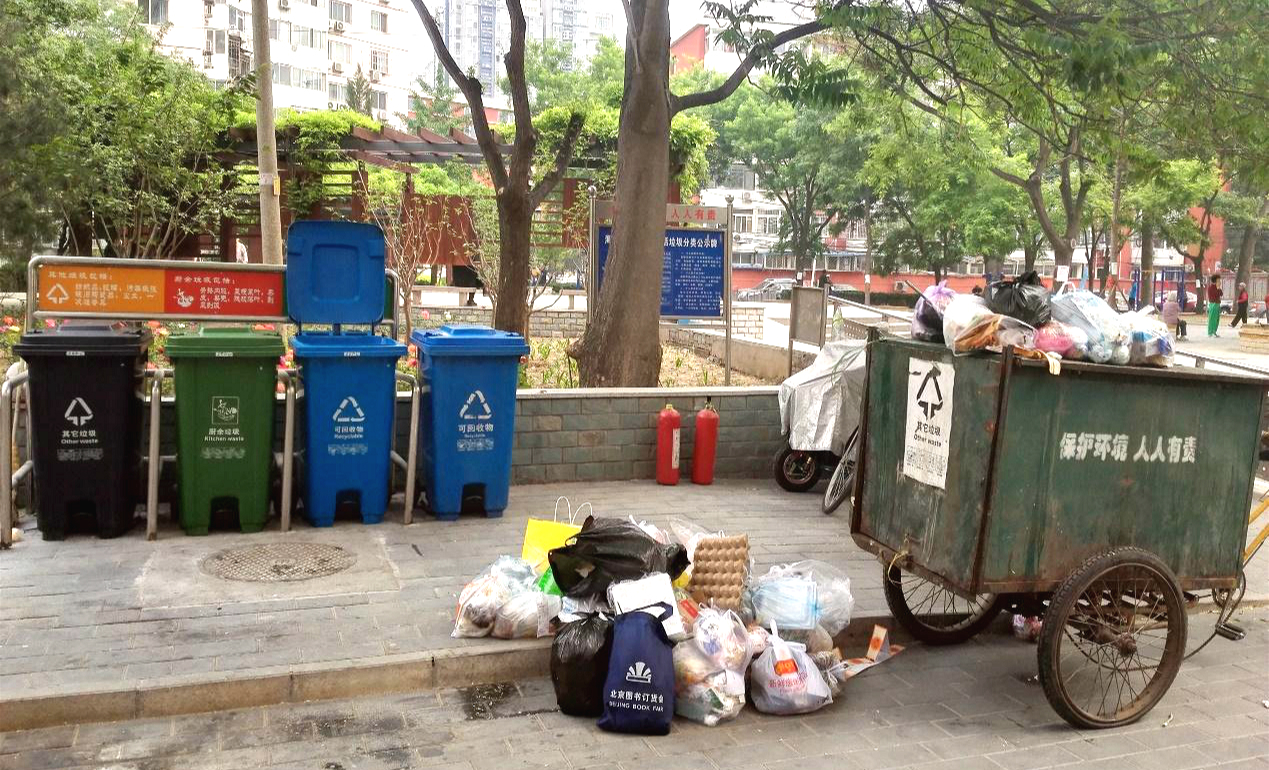 Recycling bins in a Beijing community. Residents prefer to use the “other waste” cart. Image: Feng Hao

Waste sorting is being given more prominence than ever before in Party and state policy, too.

The National Development and Reform Commission admits that collection, reuse and disposal will be key to the success of the new plans. The document stresses that work must consider all stages of the process to ensure residents are willing to sort their waste, and that their efforts are not in vain.

At an internal Party meeting in December last year, President Xi Jinping called for faster introduction of categorisation of waste at all stages of the process – promoted by government but carried out by the people.

There is also a consensus in civil society that better waste sorting is needed. Mao Da of the China Zero Waste Alliance suggests that every district and county in Beijing, for example, should set up a “waste sorting demonstration line” – to be run without compromise. Even if some parts of the system cannot operate due to a lack of properly sorted waste, unsorted waste must not be accepted.

Mao says this will rebuild public trust and that if waste facilities are forced to idle if there is no properly sorted waste it will encourage authorities to promote better sorting.

Greater transparency is also needed. Information on waste systems should be made public so residents can see that the waste they are sorting is being handled properly.

Once the systems are in place, the next step will be to make waste sorting compulsory. Hangzhou is already experimenting with fining management companies of apartment complexes or even leaving their waste uncollected if it’s unsorted. The city has found that halting waste collections is a very effective tactic, with most management companies quickly contacting authorities and undertaking improvements.

But the idea that taking responsibility for your own waste is unnecessary is deeply ingrained. Some people complain that they are already paying consumption taxes, management fees and waste disposal fees so why should they have to sort their waste?

“Making it compulsory defines responsibility, it makes clear that we produced the rubbish, and so it is our responsibility, or we’ll be subject to some kind of sanction,” explains Liu Jianguo. “But currently in China it’s likely to be a combination of punishments and rewards in the short term, to foster better waste sorting habits.”

Encouraging new habits means getting rid of some old ones. But after two decades of attempts to implement effective sorting, it’s unclear whether it will genuinely take root in China’s cities, let alone its rural areas.

But with urban areas increasingly surrounded by landfill sites, there is an urgent need to reduce waste volumes, increase recycling, and minimise pollution from waste. Sorting isn’t the end goal, just an important part of achieving those aims.