In the past, the remoteness and high elevation of the Himalayas and Tibetan plateau was believed to protect the vast expanse of land from the chronic pollution that haunts the densely populated regions of China and South Asia. It was thought that the world’s highest mountain range would act as a barrier to stop pollution from reaching the higher glaciated peaks.

But new research from scientists at the Chinese Academy of Sciences show pollution is spreading over the world’s highest mountain range and across central Tibet. The team recorded major spikes in pollution this April on the northern slopes of Everest, and traced the source back to Nepal and northern India.

Every year, particularly during the dry winter season from October until May, the heavily populated Indo-Gangetic Plain in South Asia is plagued by severe air pollution. In recent years, people in India and Nepal, in particular, have suffered from periods of suffocating air pollution, known scientifically as Atmospheric Brown Cloud (ABCs). In 2015 India’s air pollution levels overtook China’s. According to an analysis by Greenpeace of NASA satellite data, the average particulate matter exposure in India exceeded that of China’s, and more importantly China’s exposure fell 15% between 2014 and 2015, while India’s was increasing by 2% per year.

Pollution is worse in the winter because there is no rain to wash pollutants from the air. In Kathmandu, for example, days with clear views of the Himalayas become very rare due to the heavy brown clouds shrouding the valley. Emissions from burning fossil fuels and biomass for cooking and heating build up during the dry season when brown clouds extend from the Indian Ocean to the Himalayan ridge.

The soot, sulphates and other harmful aerosols in ABCs pose a major threat to the water and food security of Asia, according to a 2008 study by UNEP. The soot settles on the glaciers, darkening the snow and increasing absorption of energy. This speeds up the melting of glaciers and snow pack in the Hindu Kush-Himalayas, which provide water for million of people living downstream.

Pollutants also absorb the sun and heat the atmosphere and so are considered as “important as greenhouse gas warming in accounting for the anomalously large warming trend observed in the elevated regions,” states the report.

With the westerlies blowing across the Indo Gangetic plain, pollutants spread across Nepal and climb up valleys and slopes of the Himalayan ranges.

Ice-core samples taken from both the southern and northern slopes of the Himalayas have also revealed rising soot concentrations during times of rapid industrialisation in recent decades, indicating pollution could travel over the high mountain range.

In recent years Chinese scientists have found more definitive evidence that the Himalayas do not block the passage of pollution into the central region of the Tibetan plateau. Thanks to observations at various observatory stations on the northern slopes of the Himalayas since 2009, they have found a similar concentration and type of pollutants on both the south and north sides of Mount Everest.

Professor Kang Shichang, director of the State Key Laboratory of Cryosphere Science at CAS, has been monitoring the atmosphere of the Qinghai-Tibetan Plateau for over 15 years.

The extremely high levels of black carbon in atmosphere during this period is far beyond the background figure on Everest and thus could be listed as a “pollution event,” said Kang.

Using satellite images and computer simulations of the air circulation system based on meteorological data, Kang and his research team concluded that 97% of the air clusters passing through the station during that period came from northern India and the neighbouring area in Nepal. “The transport of the air masses passed most parts of Nepal before finally climbing over the Himalayas to reach the northern slopes of Mount Everest,” states the analysis from Kang’s team.

The team traced the pollution to Nepal as the major source, followed by northern India using images from the MODIS instrument on NASA’s Aqua satellite. “An apparent rise of Aerosol Optical Depth (AOD), particularly fine aerosol particles, at the Everest station occurred, which indicated the increasing of fine particles from burned biomass [such as from cooking stoves fed by wood or crops, or from forest fires],” the report stated.

During April, when the spike in pollution on Everest was recorded, Nepal experienced a region-wide heavy haze from forest fires after prolonged drought. 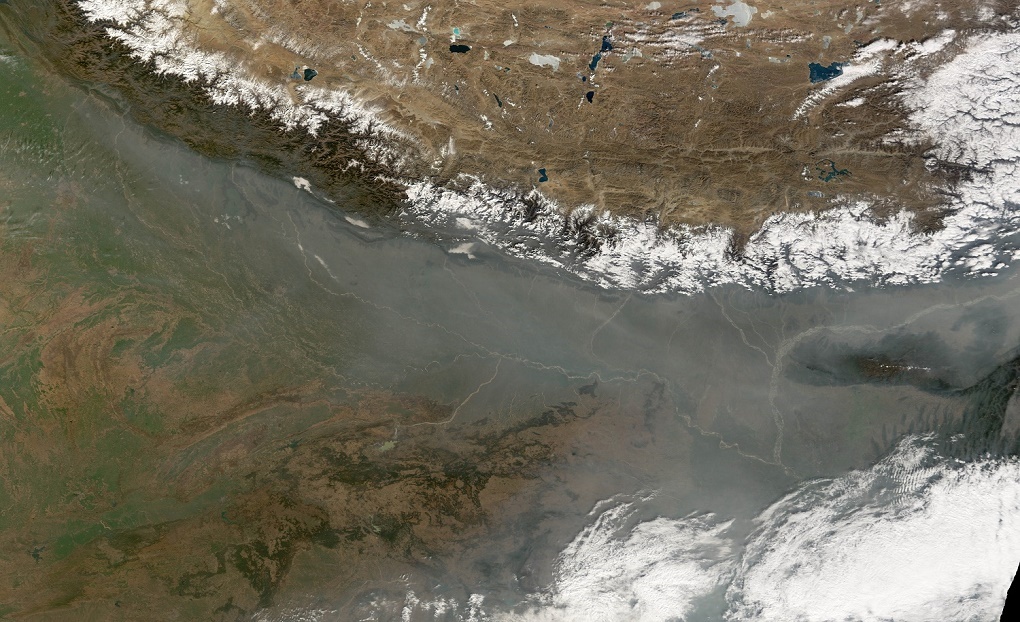 Transboundary air pollution does not only affect the area around Everest. In March 2009, the Namco station in central Tibet, around 800 kilometres to the northeast of the Everest station, recorded a sudden rise of AOD in March 2009 to 0.42 (AOD varied between 0.428 and 0.550 for China’s most polluted urban region in the neighbourhood area of Beijing during 2000-2013). This was a huge spike compared to the low base level of 0.029 AOD.

The results and analysis of Kang’s team were published in Atmospheric Chemistry and Physics in mid-2015. The research detailed “how polluted air masses from atmospheric brown cloud (ABC) over South Asia reach the Tibetan Plateau within a few days,” driven by a combination of long distance and local meteorological processes.

Every year before in the months before the monsoon, from March until May, there is a high chance of severe transboundary air pollution, Kang said, based on almost a decade of observations.

“The Himalayas are not an impermeable barrier,” said Arnico Panday. Panday is programme coordinator of the Atmosphere Initiative at the International Centre for Integrated Mountain Development (ICIMOD), and a former visiting professor at the Massachusetts Institute of Technology. In an email interview he stated, “There are passes and river valleys that cross the Himalaya at numerous places, so it is easy for air from the south side to reach the north side.”
​
Kang emphasised the importance of regional cooperation to find a solution to long- distance transboundary air pollution in the Himalayan region. However so far, the The Malé Declaration on Control and Prevention of Air Pollution and its Likely Transboundary Effects for South Asia adopted by some South Asia countries in 1998 has not produced any results.

“Right now most people in the source regions don’t even know the consequences of the pollution they are emitting,” said Panday, adding: “There are still huge data gaps, and gaps in the scientific understanding of the relationship between source regions and locations of impacts, he explained.

Indeed, transboundary air pollution is a problem for many regions across the world. As early as 1979, European countries signed the Geneva Convention on Long-range Transboundary Air Pollution to combat region wide smog. The pollution from forest fires in Indonesia has had a devastating effect upon neighbouring countries. Eastern China is allegedly the source of pollution for Korea and Japan – even as far as California.

Technological cooperation and exchange are essential to control the glacier melt and the expansion of the atmospheric brown cloud. “We are planning to deepen our cooperation with ICIMOD and enhance the joint atmospheric observations on the Third Pole,” Kang said. “We also expect to include the efforts of Indian researchers into our network,” he added.

According to Kang some of China’s experiences, for example, the strict ban of field burning and effective recycling of agricultural stubble in eastern China, can be promoted in South Asian countries facing similar problems. In addition, mitigation efforts, including the promotion of energy-saving cooking stoves, shifting to higher standard fuel, and dismantling polluting brick kilns, are as important.

In the meanwhile the glaciers in the high Himalayas are experiencing pollution like never before.

This article was originally published on thethirdpole.net