Iron is known to be toxic to brain cells, and tiny magnetic iron particles (magnetite) are thought to be involved in the development of neurological disorders. Now, for the first time, we have identified the abundant presence of these highly reactive particles in human brains.

Previous studies have suggested that there are increased amounts of magnetite in Alzheimer’s-affected brains, and that these particles may be linked with the development of the disease. We wondered if this increased brain magnetite might come from inhaling polluted air.

Very small, round particles made out of magnetite (called magnetite nanospheres) are abundant in city air pollution. They are formed at high temperatures and condense as iron-rich droplets as they cool. These particles range in diameter from less than 5nm (nanometres) to more than 100nm (for comparison an HIV is 120nm in diameter) and are often found together with pollution particles made out of other metals.

Vehicles are a major source of these magnetite nanospheres. They are created by fuel combustion (especially diesel), iron wear from the engine block and frictional heating from brake pads. In addition to some occupational settings, high concentrations of magnetite pollution nanoparticles may be produced indoors by open fires or poorly-sealed stoves used for cooking or heating.

Larger magnetite particles can be more than 10 micrometres in diameter (about the size of a cloud water droplet) and come from industrial sources, such as power stations, but only magnetite pollution particles that are smaller than 200nm can enter the brain directly by being breathed in through the nose. They can then travel through the nerve cells of the olfactory bulb (see illustration). 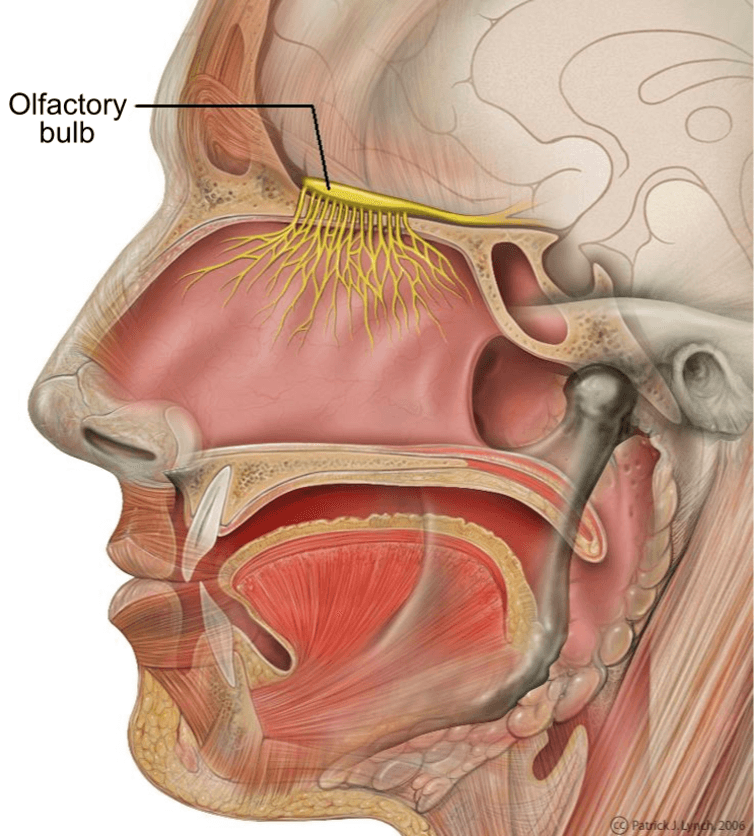 The blood-brain barrier – the protective cell wall that prevents harmful substances entering the brain – doesn’t protect against this type of nasal entry, so these small particles can enter the brain relatively unimpeded. After nanoparticles enter these olfactory areas, they can spread to other parts of the brain, including the hippocampus and cerebral cortex, which are regions affected in Alzheimer’s disease.

The presence in the brain of magnetite might trigger events leading to neurodegenerative disease. Magnetite contains a mix of two types of iron, called ferric and ferrous iron. Ferrous iron has been shown to be an effective catalyst for the production of very reactive and damaging molecules called “reactive oxygen species”. Brain damage due to these types of molecules is known to occur very early in the course of Alzheimer’s disease.

A key change in the brain in this disease is the formation of “senile plaques”, which are clumps of abnormal protein found between nerve cells. Magnetite particles have been found to be directly associated with these senile plaques, and to enhance the toxicity of the protein that is found in the centre of each one.

To examine if magnetite from external sources might exist in human brains, we used magnetic, electron microscopic and other techniques to examine brain samples from 37 cadavers – aged three to 92 years at time of death – who had lived in Mexico City or in Manchester, UK. We found that many of the highly magnetic brain samples were from people under the age of 40 from Mexico City who had been exposed to high levels of air pollution, and in older Manchester cases (over 65 years at death) with moderate to severe Alzheimer’s disease.

Since less than 5% of cases of Alzheimer’s disease are directly inherited, it is likely that the environment plays a major role in the disease. Because of their combination of being very tiny, known to be toxic to brains, and very commonly found in air pollution, magnetite pollution nanoparticles need to be examined as a possible risk for brain disease, including Alzheimer’s. If a link to human health is discovered, this would have major implications for laws limiting exposure to this type of air pollution.

This article was originally published on The Conversation and is reprinted here with permission.