For at least a decade, the sector has come under increasing pressure from policymakers, particularly the EU, to come up with an effective method of capping GHG emissions from the world’s growing fleet of commercial aircraft.

Proposals expected in October from the UN’s aviation body, which is tasked with coming up with a solution, will need to be transparent and feasible in multiple jurisdictions.

Under those proposals, the UN body – the International Civil Aviation Organization (ICAO) – is expected to recommend a market-based measure (MBM) to help cap emissions from their level in 2020.

If aviation’s emissions were compared with a country’s, the sector would be a top-ten emitter of CO2 – and its contribution is expected to treble in the coming years as tens of thousands of new large aircraft take to the skies.

While the aviation sector will draw on other tools, such as better air traffic management, more efficient aircraft, and sustainable low-carbon biofuels, these haven’t yielded much to date, and likely can’t close aviation’s emissions gap.

Campaigners are highlighting that the targets included in the Paris Agreement mean that global emissions, including aviation’s, will have to decline steeply if the world is to limit warming to 1.5-2C above pre-industrial levels.

A successful market-based measure, such as the use of UN-issued carbon offsets, could make the difference, says proponents. 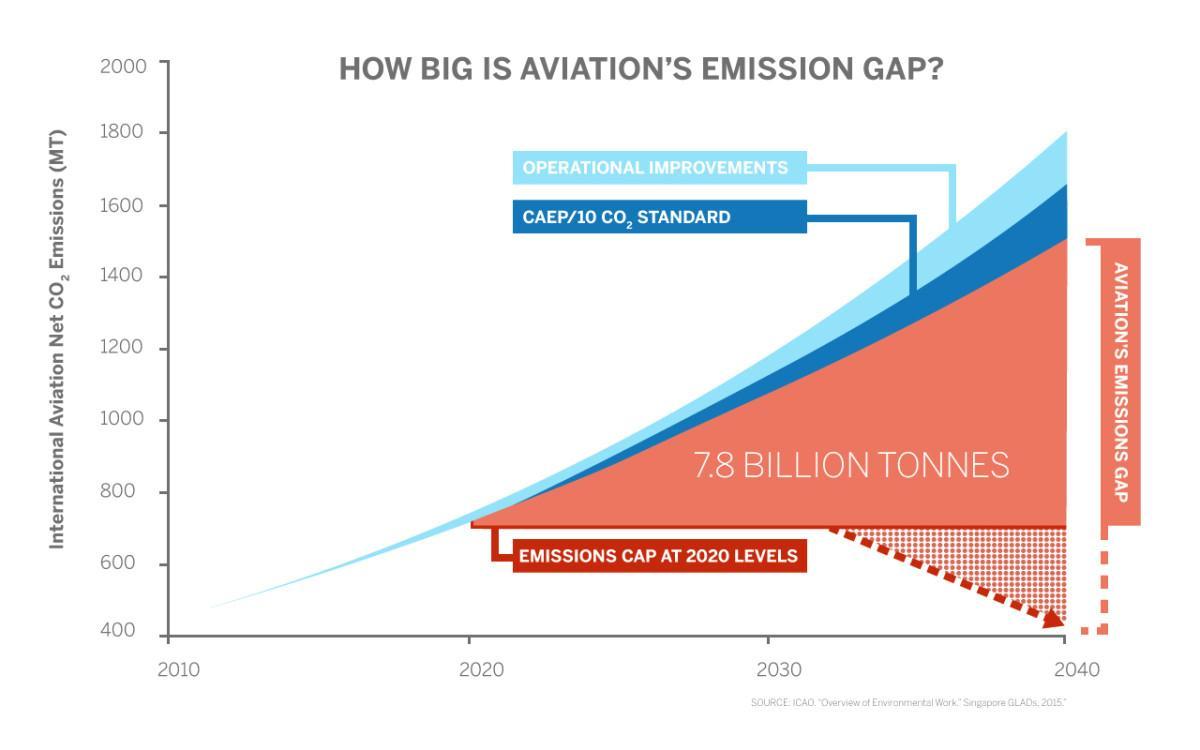 How would it work?

It would start with a cap, set at 2020 levels, on the sector’s total CO2 emissions. Airlines would try to reduce emissions themselves. Those that emit more could purchase emission reductions (such as carbon credits) from other sectors that have cut emissions below specified levels.

Over time, the cap would ratchet down, in keeping with the Paris goal. Airlines’ investments would promote greater energy efficiency in aircraft – and, through the use of verified carbon offsets – support sustainable low-carbon development outside the sector.

For example, an airline could invest in helping farmers in China cut methane pollution from agricultural waste by converting to biogas fuels.

What stands in the way of agreement?

The MBM sounds like a great idea. But to meet the target of finalising the MBM by the close of ICAO’s 2016 Assembly, governments need to fashion an agreement that solves five highly problematic issues:

International civil aviation agreed on the 2020 cap back in 2009. The 2013 ICAO Assembly adopted a resolution recognising the cap, committing to finalise the MBM by 2016, and affirming the principle of non-discrimination established under the Chicago Convention on International Civil Aviation. Under that convention, different carriers competing on the same routes should not be subject to differential regulation in ways that would distort markets.

China voiced its disapproval of such a cap, adding that “without differentiated responsibilities will impede the future development of international aviation of developing countries.” While China supported emission reduction goals for the sector, it said “developed countries should take the lead in taking reduction measures in order to offset the growth in emissions from international aviation of developing countries.”

But these methods don’t provide much differentiation. Another possibility is that in light of the national commitments made in Paris, each aviation nation could put forward its own nationally determined aviation contribution.

But that could generate market distortion, not to mention a regulatory patchwork – which is just what China and others objected to when the EU, in 2013, regulated flights in and out of Europe under its emissions trading system.

Within each region, each operator’s offset obligation would be set in proportion to its share of regional traffic.  This would ensure no discrimination on routes within each region. And the system would be updated regularly to take into account changes in regional growth and shifts in airline market share.

Whether such an approach could help countries reach agreement remains to be seen.

Nations will need to agree on transparent rules for measuring and reporting the emissions of all flights covered by the MBM. Such rules need not be onerous; airlines already measure fuel burn for economic and safety reasons.

So what kinds of emissions units can airlines use?  ICAO is an aviation body, not an emissions body. So it is unlikely ICAO will establish its own out-of-sector emission reduction programmes. But ICAO could adopt criteria that emissions unit programmes would need to meet to provide emissions units to market mechanisms.

To ensure a level flying field, those criteria would need to be mandatory. And steps must be taken to ensure that the emissions units haven’t already been claimed toward meeting a country’s emissions limitation obligations under other commitments, for example Paris.

Full and transparent review of the programme every three to five years will be essential to ensure that it is operating effectively, and over time to ratchet the cap down in line with the Paris Agreement.

Taken together, the “big five” make the MBM a tall order for ICAO. The UN’s aviation arm has managed to develop some 10,000 standards over the years – but the MBM is shaping up to be one of its biggest challenges. Whether it will meet this challenge is not clear. But what is apparent is that the aviation industry’s licence to grow depends on how it deals with its carbon footprint. And that puts the spotlight on ICAO and its 2016 assembly to achieve the real deal in a transparent manner.

Ratification, not signing, is critical test for Paris climate deal