Residents of Yunnan province’s capital Kunming caught their first glimpse of an awesome new sight on 1 January 2016. The Kunming Waterfall Park, a 400-metre wide waterfall where farmland once sat, opened to the public on New Year’s Day capping off nearly three years of frantic work. The feat of engineering is a harbinger of drastic environmental changes being made to the region.

Much of the water cascading through the park’s manicured grounds should not, by natural design, be there at all. It is redirected and pumped from the Niulan River, which at its nearest point flows 200 kilometres east of Kunming. The 1.1 billion yuan (US$168 million) waterfall park is merely the expensive public face of a serious effort to cleanse Kunming’s Dianchi Lake of decades of accumulated pollution that has rendered one of China’s largest fresh water bodies an ecological catastrophe. 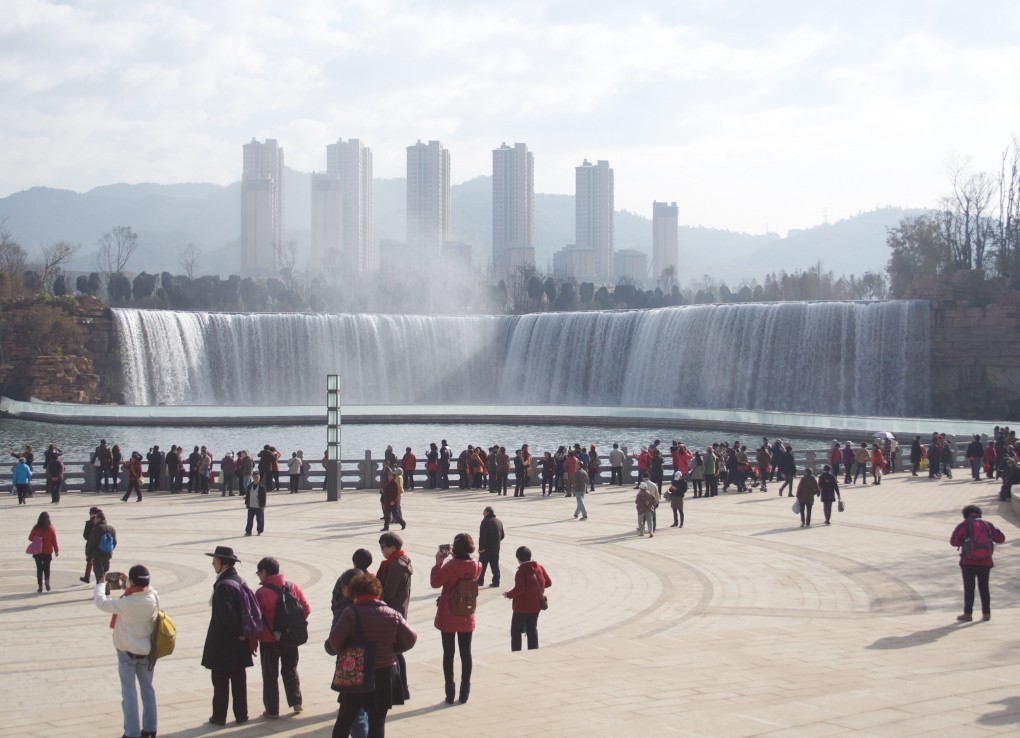 Deterioration of a once-healthy lake

Thirty years ago, worries of scum-ridden, oxygen-depleted water were nearly unimaginable. Dianchi Lake was a reliable source of fresh fish for Kunming markets, while on hot summer days it provided an ideal place to swim for children on summer holiday. But as the city grew, and farmers used enormous amounts of industrial fertilizers to grow ever-more crops, trouble started to brew. The situation was exacerbated by the continuous discharge of Kunming’s untreated sewage directly into the lake.

By the late 1980s, a film of algae began to spread across the lake, eventually growing so large and pervasive that by the early 2000s, almost the entire surface was green and fetid. Efforts to restore lake water quality were slow in coming.

The city’s first sewage treatment plant was not built until 1990, and the modest facility did little to slow the total amount of human and industrial waste produced by three million people flowing into Dianchi. As a result, the water became highly eutrophic (polluted by a high concentration of nitrates and or phosphates), and natural cleansing buffers, such as shoreline wetlands, withered and died.

The local government, under the auspices of the Dianchi Lake Management Authority (DLMA), began a series of costly and unsuccessful attempts to rebalance the lake’s oxygen levels and rid it of algae.

Projects included wetland restoration; planting hundreds of tonnes of invasive water hyacinths; banning all new construction near the lakeshore and injecting ozone directly into the lake. Still, water quality hovered around Category 5, a ranking deemed “unfit for industrial use” by Beijing standards. 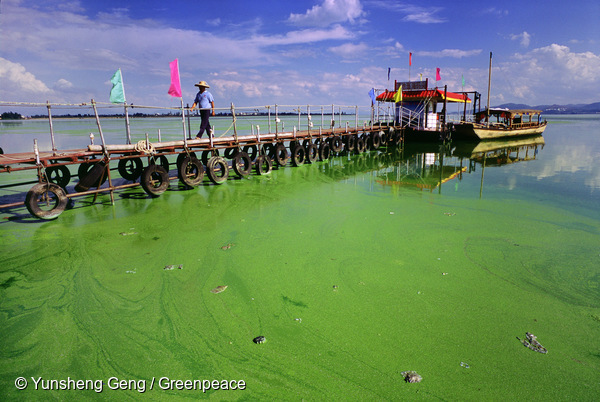 An algal bloom in Dianchi Lake at the ferry stop near the HaiGeng training base. Algal blooms can present problems for ecosystems and human society. Despite millions spent to clean up the lake, the water remains undrinkable and unfit for agricultural or industrial uses （Image by Yunsheng Geng）

In 2013, the DLMA began pumping water from the Niulan River towards Kunming. The diversion originates at Deze reservoir in eastern Yunnan, travels west to the northern outskirts of the city and into the Panlong River, which in turn flows through central Kunming before emptying into Dianchi.

The undertaking is part of the 1 billion yuan Waterfall Park project, which now funnels an average of 566 million cubic metres of water into Dianchi each year. The recently opened Kunming Waterfall Park, in addition to being a novel public area, helps oxygenate water headed to the lake.
The results, according to government statistics, have been significant. Dianchi has a natural residence time of roughly four years, meaning anything entering the lake takes an average of four years to circulate through and then exit downstream. That cycle has been sped up to only three years with the addition of the Niulan River water. The accelerated process is credited with lowering levels of organic chemicals such as ammonia and phosphorous resident in Dianchi by 30% over the past two years.

“The diversion will improve water quality to some extent…Additional water will control the algae growth somewhat, and will improve the water quality of Dianchi Lake. However, restoration of a polluted lake is a complex process which requires multi-factor controls,” says Ma Xing, a hydrologist working at the Yunnan Institute of Environmental Sciences. And at least some supplementary help is on the way in the form of desperately needed sewage treatment plants – both new and upgraded – along Dianchi tributary rivers as well along outflow points. 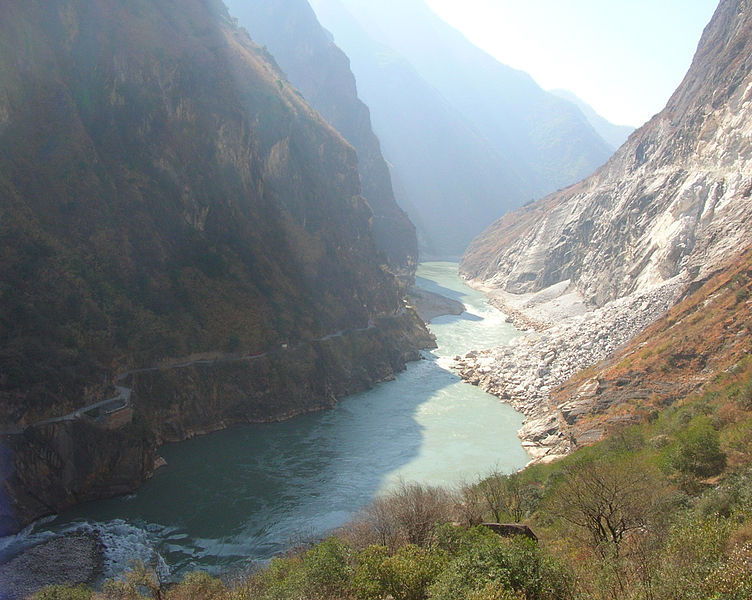 In addition to the Niulan diversion and the installation of modern sewage treatment facilities, even more water will soon supplement existing inflows into the lake. Beginning in June, the Dian Zhong Water Diversion Project will come online. Officially approved by China’s National Development and Reform Commission in January, the undertaking will redirect huge amounts of water from northern Yunnan’s Jinsha River, also known as the headwaters of the Yangtze.

The undertaking is primarily concerned with drought alleviation, especially in the province’s populous central region. An estimated 3.4 billion cubic metres of water will be diverted south each year from the Jinsha, most of it destined for existing reservoirs servicing population centres hard hit by a severe and crippling drought between 2009 and 2014. The municipalities of Lijiang, Dali, Chuxiong, Kunming, Yuxi and Honghe are the major beneficiaries.

While the majority of water reaching these cities is earmarked for emergency use in times of drought, nearly one-fifth – or 672 million cubic metres per year – will run into Dianchi and two other less polluted lakes, Qilu and Yilong. The additional water directed toward Dianchi will then augment the Niulan diversion, also via the Kunming Waterfall Park. According to a Dianchi Lake management expert familiar with government thinking (who wished to remain anonymous), extra water from the Jinsha should, over time, ease environmental stresses on the Niulan river basin by lessening its overall water contributions.

The anonymous source also explained that the Jinsha diversion will only remove a fractional amount – by his calculations less than one tenth of one percent – of the river’s per-second runoff. Therefore, engineers argue that the project should not adversely affect the river or its catchment area. However, through a quirk of Yunnan’s mountainous topography, much of the water leaving Dianchi eventually flows back into the Jinsha.

The concern now is how well the polluted water flushed out of lake is treated before it once again reaches the source of China’s largest river.

“The impact should be relatively small, or in a range that can be controlled. Otherwise the central government will intervene. However, if the [discharged water] is not treated well, or treated below national standards, there could be far-reaching impact on the Jinsha and upper reaches of the Yangtze. This is crucial” said a source close to the local government.

The Kunming Waterfall Park is now receiving an estimated 10,000 people each day, many of whom have no idea the serene cascade in front of them represents an engineering project of enormous magnitude. However, if successful, the twin water diversion schemes feeding the falls will radically alter the day-to-day lives of Kunming citizens, who look on their once-prized lake as a source of shame.

The provincial government has vowed to make Dianchi “swimmable” again by 2020, something no one in the province has witnessed for almost two generations.

Who is responsible for China’s water?