Tibet wants to bottle up much more of the region’s water resources, despite shrinking glaciers and the impact that exploitation of precious resources would have on neighbouring countries.

This week the Tibet Autonomous Region’s government released a 10-year plan to encourage the massive expansion of the bottled water industry in the ecologically fragile region.

The target is to build 5 million cubic metres of bottled water production capacity by 2020. Since Tibet produced 153,000 cubic metres of water in 2014, according to Xinhua – this is indeed a huge jump.

Water in Tibet is abundant and so much cheaper than in other parts of China. Water bottled upstream among snow-capped peaks is also perceived as pure, commanding a premium. This has led to a huge influx of companies hoping to cash in on the region’s water resources. Though it only makes up a very small proportion of China’s annual bottled water production, such premium water is seen as the new point of growth for the country’s booming bottled water industry.

But tapping glaciers will come at a huge cost to Tibet’s fragile environment, warned China Water Risk’s recent report “Bottled Water in China – Boom or Bust?”. The Qinghai-Tibet Plateau – known as Asia’s water tower – is the source of the continent’s major rivers that provide a lifeline for China and other parts of Asia.

In the last two decades, China has become the world’s largest bottled water consumer and a major producer. However, with per capita consumption 19% lower than global average, the market is expected to continue to boom. Even if China reaches the consumption level of Hong Kong, the market scale would be four times larger than today’s. In 2012, China produced 55.6 million cubic metres of packaged water.

In the light of President Xi Jinping’s desire to build an “Ecological Civilization”, China has also strengthened policies to conserve forests and natural protection zones. China’s strong commitment to dealing with climate change also includes actions to protect its glaciers.

But how does the growth of the bottled water industry in the region fit into such policies? What does it mean for China and downstream countries if bottling production capacity soars? The glaciers in the Qinghai-Tibet Plateau have already shrunk 15% over the last three decades. With the stakes so high, the government and investors should rethink their strategy.

While concerns over water pollution has driven the demand for bottled water, it’s no surprise that companies have flooded upstream to regions like the Qinghai-Tibet Plateau in search of cleaner sources of water. The region is home to China’s largest national parks and the source of major transboundary rivers. It is also known as “the third pole” because it holds the largest stores of fresh water outside the north and south poles. 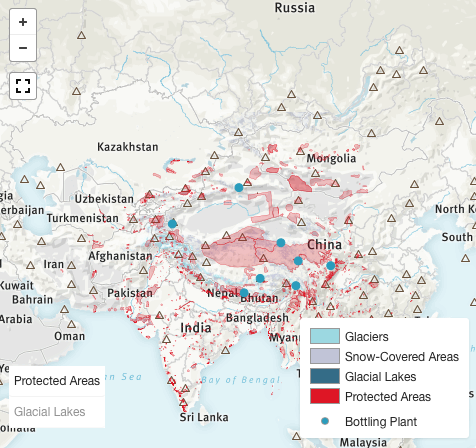 Please click on the map to show the major bottled water companies in the region. Scroll over the map and click on the blue dots to find out more:

The Qinghai-Tibet plateau is already a hotspot for the bottled water industry. By 2014, the government had approved licenses for 28 companies to produce bottled water in the Tibetan Autonomous Region. Bottled water activities are also growing rapidly in neighbouring Xinjiang, Qinghai and Yunnan provinces, with companies even bottling water straight from glacier tongues.

Gelaixue Glacier Water is one such company. According to its official website, all its water comes from the glacier tongue of the “No.1 Glacier” – which sits 4,480 metres high in the Tianshan mountains, Xinjiang province.

The company and its partner, the Tianshan Glaciological Station of the Chinese Academy of Sciences, have not disclosed any details about the exploitation process or the environmental impact of its activities. What is clear is that the glacier is melting rapidly – at a rate of 4 to 8 metres every year.

This is just the start of the rush to exploit the region’s water resources. Cash-rich companies, including pharmaceutical, confectionery, petroleum and biotechnology, all want a finger in the pie. In November 2014 as part of a government advocacy event called “Good water in Tibet should be shared with the world”, the TAR government signed 16 agreements with various investors, totalling 2.6 billion yuan (US $409 million). Among them were state-owned oil producer Sinopec, Bright Food Group, China National Gold Group and the Three Gorges Group, which owns in the world’s largest hydroelectric power station in Hubei province.

With the support of local and central government, companies have moved fast. Since early 2015, Sinopec Group has sold glacier water bottled from Tibet in its 23,000 petrol stations and convenience stores across China. Official data shows the overall design capacity in TAR had reached 3 million cubic metres by the end of 2014, already half way to the 5 million target. Sales doubled in 2014 compared to 2013, reaching 830 million yuan, according to the TAR government.

Although the development plan highlights the “three bottom lines” – social stability, environment and safety– the industry is still growing against the tide of many of China’s environmental policies.

The environmental and regulatory risks of the bottled industry are high, if China is determined to protect its water sources and ban all exploitative activities in protected areas around river sources. The Qinghai-Tibet Plateau is not only important source of water for China but also Southeast and South Asia. The region is the source of ten of Asia’s major rivers. This includes the Yangtze and Yellow rivers, China’s two major watersheds and economic belts and also the transboundary Lancang (upper Mekong) river, the Nu (Salween) and the Yarlung Zangbo (Brahmaputra) river.

This upper watershed should be protected for long term prosperity rather than exploited for short term development. China’s leadership recognises the tough choices needed to balance climate, water and energy security, with the need to protect watersheds. Yet local policies appear to be misaligned.

The region is among the places most vulnerable to climate change. According to the Chinese Academy of Sciences, glaciers in the Qinghai-Tibetan plateau have already shrunk 15% over the past three decades. In the short term, melting glaciers means higher bottling potential; but in the long term, rivers will dry up with disastrous consequences downstream.

Since China sits at the headwaters of these rivers and glaciers, any development within China could have a big impact on the region’s water security. Aggressive plans to build an extra 124 gigawatts of hydropower on transboundary rivers in the region has already raised many concerns. As highlighted in China Water Risk’s latest report “Towards a Water & Energy Secure China: Tough Choice Ahead in Power Expansion with Limited Water Resources”, China is facing tough choices in expanding its generating capacity. Coal-fired power could exacerbate glacial melt and water scarcity, while “greener” hydropower on transboundary rivers could raise geopolitical tensions.

If the bottled water industry runs wild, this could lead to a new set of environmental problems. Although the TAR only contributed 0.2% of China’s overall 56 million cubic metres of packaged water production in 2012, according to the State Statistics Bureau of China, there is no information about the potential environmental impact of the industry. There are no environment impact assessments and the majority of the companies haven’t released reports on water source protection, pollution control, water efficiency or benefits for local people.

Companies that do disclose information, such as the Hong Kong listed “Tibet 5100”, claim that the amount of water withdrawn from springs or glaciers is not enough to dry them up.

However, is it ethical to withdraw any water from protected areas where glaciers are already shrinking and where the central government has invested billions of yuan in conserving the region for climate adaptation and mitigation?

Also, the cost of bottling mineral water at the foot of high-altitude glaciers is much higher, with the extra technologies and transportation needed to bring the product from source to market. The carbon emissions of the latter should also not be ignored.

The local government in Tibet has also said it will promote the export of bottled water. Is this the right way forward to secure China’s water security? The government of Jilin province in northeast China is also encouraging drinking water for export. Here, the bottling capacity of Changbaishan (Ever White Mountain) is expected to grow to 50 million cubic metres with 10% production exported by 2020.

While many companies are flooding in to exploit the “blue gold” of Tibet, there are signs some are struggling to survive. On 28 July 2015, shares of Tibet 5100 – one of China’s top high-end bottled water brands – fell 12.7% in the Hong Kong Stock Exchange after the China Railway Corporation stopped providing free mineral water to its passengers.

Tibet 5100 sources its water from glaciers at an altitude of 5,100 metres in Tibet and was one of the first companies to market glacier water in China. During 2011 to June 2015, the company sold 200 million litres of bottled mineral water to the China Railway Corporation.

China Railway failed to renew the contract in June 2015. There was speculation this is in line with China’s crackdown on corruption in the railway system, but it may also signal a shift in demand. Most high-speed railway stations and trains are now equipped with drinking water facilities, instead of giving out free bottled mineral water, a spokesperson for Shanghai Railway told the media.

For more brands and bottlers in the third pole region, this could be a warning. Demand for bottled water may fall as consumers go back to tap and once public drinking facilities are mandatory in public sphere.

As the joint report “China’s Long March to Safe Drinking Water” published by China Water Risk and chinadialogue in March 2015 pointed out, China invested up to 7 billion yuan to secure public water supply in rural and urban areas during the 12th Five Year Plan period (2011-2015). The investment will continue to grow in the coming years since the State Council has reiterated the government commitment on securing public water quality in the “Water Pollution Prevention and Control Action Plan”.

By the time the quality of the public drinking water system is fully secured, will bottled water maintain an alternative for drinking water? Given the high costs of bottling and shipping glacier water to households and public facilities, as well as the high environmental costs involved, investors should start to rethink their strategies in Asia’s water tower.

This article was first published on thethirdpole.net and includes an interactive version of the map which can be accessed here.

Large scale hydropower will fail in Tibet due to freezing temperatures