Villagers in Zizhu have had to find a new water source three times in the last 30 years. Although it may sound extreme, their experience is a typical example of how pollution is worsening rural China’s water supply crisis.

Most villagers used to have their own wells, typically around 12 meters deep. But coal mining altered the local geology, reducing the amount of ground water available. Wells had to be dug to a depth of 70 or 80 meters. Even so, water was scare.

Five years ago a private water supply plant opened, piping water from a nearby reservoir. However, the reservoir also signed a 15-year contract with a fish farmer. As a result, its water became foul-smelling and dirty, not even fit for washing clothes. Local residents are now taking water from 2-meter-deep ponds on the hillside. Unfortunately, the ponds are also polluted by fertiliser and pesticides.

It’s a familiar story for villages in rural China, according to a major new survey undertaken by the Beijing-based environmental group Greenovation:Hub. It surveyed 78 villages in two years, from 2011-13, discovering major problems of water scarcity and pollution. Greenovation did not need to dig deep to find problem villages: it focused on those already in the media, or suggested by volunteers as “problematic”. For this reason, the majority of villages surveyed were in the provinces of Henan in the north, and Anhui in central China. 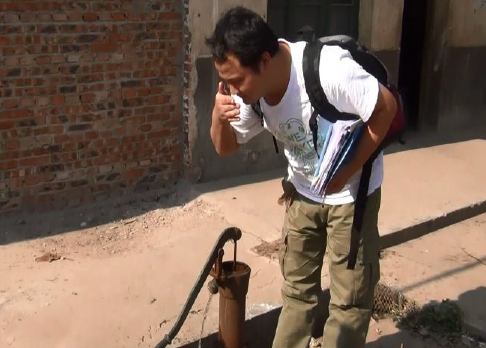 Shi Liling, who heads the group’s “Glass of Clean Water” project, told chinadialogue that water problems had speeded migration, turning some villagers into environmental migrants, while the elderly left behind have no choice but to buy expensive bottled water.

Greenovation’s team carried out a battery of 17 tests on water samples, including sensory, physical and chemical checks, and tests for overall water hardness, and levels of heavy metals, ammonia, nitrates, nitrites and hydrides. Less than half the samples were up to standard.

Pollution caused by local geological conditions is common in rural China, with more than 90 million people suffering from drinking water contaminated with fluoride, arsenic or salts, according to data from 2004. The new study found that alongside that “natural” pollution, rural water supplies are being endangered by new industrial sources of contamination.

Almost half the 78 villages surveyed were affected by industrial pollution, and other problems – such as agricultural pollution of land and rivers, pollution from aquaculture, natural geological sources of pollution and landfill sites – were commonplace. Only six villages had no obvious source of pollution nearby.

Fearful for the future

Industrial pollution affects surface and shallow well water particularly badly, but different industries produce different types of pollution and there is no one simple method to clean the water up. This pollution permeates deep into the ground over a long period of time, so it remains rare for wells deeper than 70 meters to be polluted. However, the risk exists, and without data quantifying pollutants or detailing the local geology it is hard to know when contamination will reach deeper groundwater, something that scares many villagers.

As many as 20 of the 78 villages suffered from water shortages. Most of them relied on well water. As shallow wells are becoming less safe, many are drilling deeper and deeper. In mountainous regions springs or streams are used as sources of good quality water.

Villages relying on surface water are affected primarily by agricultural pollution. Overuse of fertiliser and pesticides upstream results in water which is murky and breaches standards on levels of organic chemicals, pesticides and bacteria.

Pollution from aquaculture is also common, caused by untreated or poorly regulated waste water and effluent from fish farms which is dumped at will, pouring ammonia, nitrates and bacteria into nearby bodies of water and groundwater. Antibiotics and disinfectants used in aquaculture also harm the environment.

The study found some reservoirs polluted by fish farms, which overuse fodder and antibiotics. Poultry manure is also dumped into reservoirs. Such farms could be relatively clean; in fact, they are causing rapid degradation of once-drinkable reservoir water.

Landfill sites are another problem for village water supplies, mostly due to careless dumping of urban waste in the past, without any measures to prevent or collect run-off leaching from the waste. The run-off seeps into village water sources, and is particularly hard to clean up because of the range of different contaminants it contains.

Villagers are becoming more aware that they face a water quality problem.

In more than half of the villages surveyed, villagers reported problems with the water. Problems were also reported in some villages where the tests did not find any issues. The discrepancy may be due to China’s relatively low standards for rural drinking water. Its upper limit for total water hardness is 550mg per litre, compared to 80-100mg in the EU. So while villagers often complained about sediment, their water still met the standard.

Shi Liling said that the team was often surrounded by villagers, asking about the testing process, and if they could test water in individual homes. Villagers were anxious about water pollution and the lack of specialist or reliable information.

Turning up the pressure

Despite greater awareness among villagers, the treatment of local drinking water remains a major problem.

In the majority of villages surveyed, drinking water was not treated before being piped to homes. Only three villages used simple treatment methods, such as filtering or alum sedimentation, and those were cases where surface water was being used.

It is striking that where villagers had reacted strongly against polluting companies, the firms had been willing to help them build water treatment facilities.

However, not many of the 46 villages in the survey where the locals had complained of water quality problem had taken action to improve the situation.

The majority of villagers just tried to make do. Only in nine villages did they opt to buy in bottled water, install water purifiers, or transport water from cleaner sources nearby. Given their low incomes and lack of infrastructure, villagers have few choices.

A small number of villages now have their own producers of bottled water, and better-off villagers are buying bottled water or installing purifiers. Also, of the 46 villages where problems were reported, 15 have now petitioned the authorities, showing they do hope for an improvement.

China needs to shift its agriculture from the water-scarce north

China’s future energy security will depend on water

The drying up of China's largest freshwater lake