As China wakes up to the problem of its cities being “besieged by waste,” it has started to encourage or enforce citizens to sort it. One young woman from Hubei has gone a step further. Carrie Yu endeavours to reduce her trash at the source by practising the zero-waste philosophy.

In 2017, while working for an overseas company in Beijing, Yu stumbled across an online video about a foreign family whose lifestyles gave rise to hardly any waste. Inspired, she and her boyfriend did an experiment. In three months they produced just two 500ml jars of non-biodegradable trash.

Yu then decided to found THE BULK HOUSE, a zero-waste store in Beijing, and focused on sharing ideas online and at events she organises in her community. Yu believes “zero waste” is still a relatively niche concept in China, but the idea of sustainable living has been more generally accepted and is slowly changing how young people live.

China Dialogue: Can you talk a little about how you started living your lifestyle?

Yu: It all began three years ago when I was forced to move house. Because time was tight and I had a lot of stuff, in the end I could only take about 20% – the essentials – to my new temporary accommodation. I threw out the other 80% of my belongings, things that I “might use.” The hassle of that move made me rethink my relationship with objects.

After that, I came across a video about an American, Bea Johnson, and her family of four who adopted zero-waste lifestyles. They could fit all the rubbish they produced in one year into a single glass jar. Her story inspired me. While I was trying to live a similar lifestyle myself, I realised that the less I owned, the less I had to worry about, and of course that also meant I produced less rubbish. 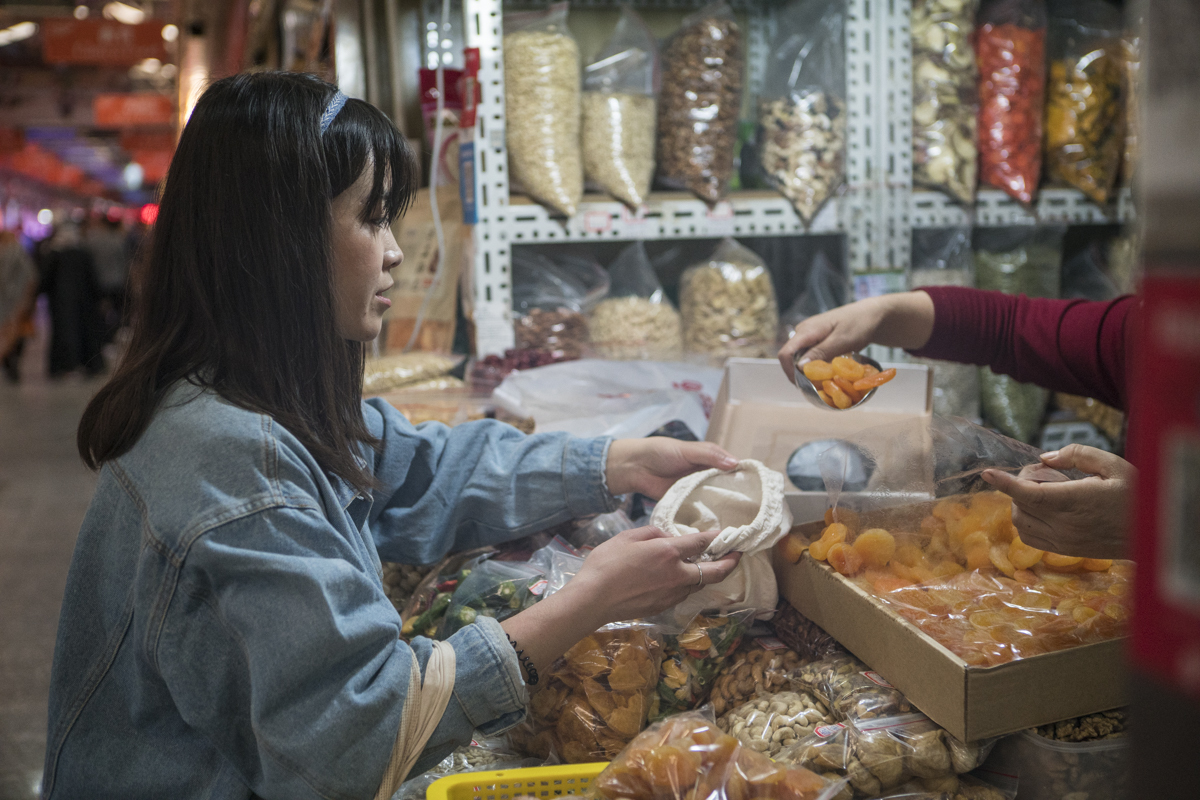 Yu takes her own bag with her to shop for groceries (Image: Carrie Yu/LOHAS)

Where do the problems lie in pushing zero-waste lifestyles?

In two places: society and the individual.

In terms of society, today’s consumer culture encourages everyone to keep buying. Advertisers create the illusion that if we don’t consume we’ll be left behind. So that we all consume “faster and better,” society produces huge amounts of disposable plastic waste. This makes it more difficult to shop sensibly and makes us more anxious and stressed.

At the individual level, no one likes hassle. Lots of people are frightened off by the word “zero.” They think it means they’d have to live “like a monk” and that they’d never be able to do it. Actually, this is a misunderstanding. Zero waste doesn’t mean that you can’t make any rubbish at all. Rather it’s about starting with those things that you need in your daily life, and getting rid of those you don’t.

Another practical issue is that even though lots of people have an awareness of zero waste, they don’t know how to start doing it because our societies are really not zero-waste friendly. For example, shops readily give out plastic straws and plastic bags; it can be really difficult to find shops that provide eco-friendly straws and packaging. This is why we opened our own zero-waste store. What we want to build is not just a single store, but also a community so that more aspiring zero wasters can exchange information and support each other.

Is city life fundamentally incompatible with the idea of zero waste?

If a fast-paced city lifestyle means buying things you really don’t need with money you don’t have, surrounded by huge amounts of non-biodegradable rubbish, and consuming limited natural resources in the pursuit of uncontrolled growth, then I do believe that zero waste is incompatible with it.

Some people worry that zero waste means less efficient. This actually depends on how you look at the problem. Sometimes, I really will forget to take my eco-friendly bag with me when I go out shopping. Would it be a waste of time to rush back home and get it? Why not look at this as an opportunity to get some more exercise, a bit more walking done? Then you’d realise that actually you haven’t lost anything at all. Going “zero-waste” means you can slow down just the right amount and find the lifestyle and pace that best suits you.

You grew up in the Hubei countryside. Do you think the older generation led more environmentally friendly lifestyles?

I was born in 1991 and I remember people back in the 1990s were pretty environmentally friendly, but no one thought about it that way. It didn’t come from any environmental awareness, but rather it was because people didn’t have very much so they didn’t have a choice; they couldn’t be wasteful. When I was young and living in the countryside we didn’t have plastic. Everyone used wood and metal. The older generation had so little. Whenever something broke, the first thought they had was to fix it. However, these days there’s plastic all over the countryside; it’s even worse than in the cities. On the odd occasions that I go back home, I see fields and hillsides covered in plastic and the river full of household rubbish. Nowadays, consumerism is entrenched in the countryside with online shopping so convenient, but people still have no environmental awareness. 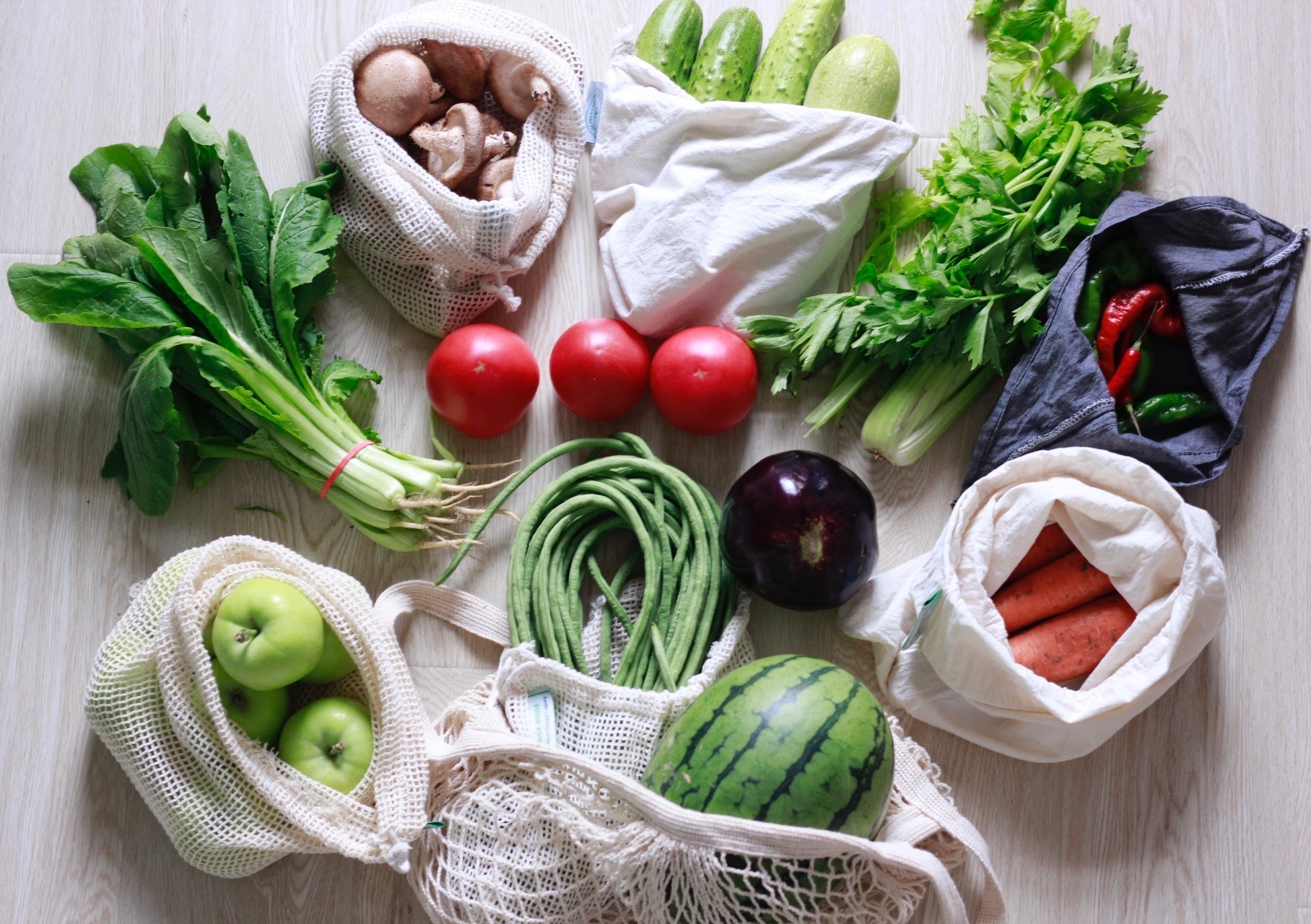 What’s your opinion on enforcing the separation of waste?

You’ll notice that “recycle” and “rot” concern waste separation and are at the bottom of the list. We should reduce how much rubbish we create and not just rely on recycling. If we want to solve our trash problem, it’s not enough just to sort our rubbish; we have to consider the whole process – production, consumption and handling.

What lifestyle tips can you give us?

I want to say that there are always more solutions than problems when it comes to going “zero waste.” Also, you may even have a lot of fun solving them and gradually become a “lifestyle guru.” I might remember to take a flask of water out with me, but what can I do if I drink it all and I’m still thirsty? Few people know that places like banks, McDonald’s and coffee shops all provide drinking water to fill up your flask. I can learn all this cool knowledge, like how to compost kitchen waste. I collect it in a stainless steel container and keep it in the fridge for about a week and then mix it up with soil and dry leaves. After it’s decomposed naturally, I use it as homemade fertilizer to feed the flowerbeds in my neighbourhood.

Can you recommend any books or other materials on zero waste to our readers?

I’d recommend: Zero Waste Home by Bea Johnson; The World Without Us by Alan Weisman; This Phenomenal Life by Misha Blaise; and Cradle to Cradle by Michael Braungart and William McDonough.

As for documentaries there's: A Plastic Ocean; The True Cost; Minimalism: A Documentary About the Important Things; The Men Who Made Us Spend; Plastic China; and Blue Planet.