“The life of every child born today will be profoundly affected by climate change,” according to a new report in the prestigious medical journal the Lancet.

Our heating planet is an increasing danger to health because it brings with it more heatwaves, wildfires, food insecurity and disease. Without a much faster response, climate change “will come to define the health of people at every stage of their lives.”

The bleak prognosis for global health is offered by the third annual report of the Lancet Countdown – a research collaboration between 35 leading institutions including the World Health Organisation, Yale and Tsinghua universities. At the same time, the report makes a powerful case for curbing fossil fuel use to reap large health rewards.

At the moment, humanity consumes 171,000 kilogrammes of coal, 12 million litres of gas and 186,000 litres of oil every second. And, as the authors state: “Progress in mitigation and adaptation remains insufficient, with the carbon intensity of the energy system remaining flat.” 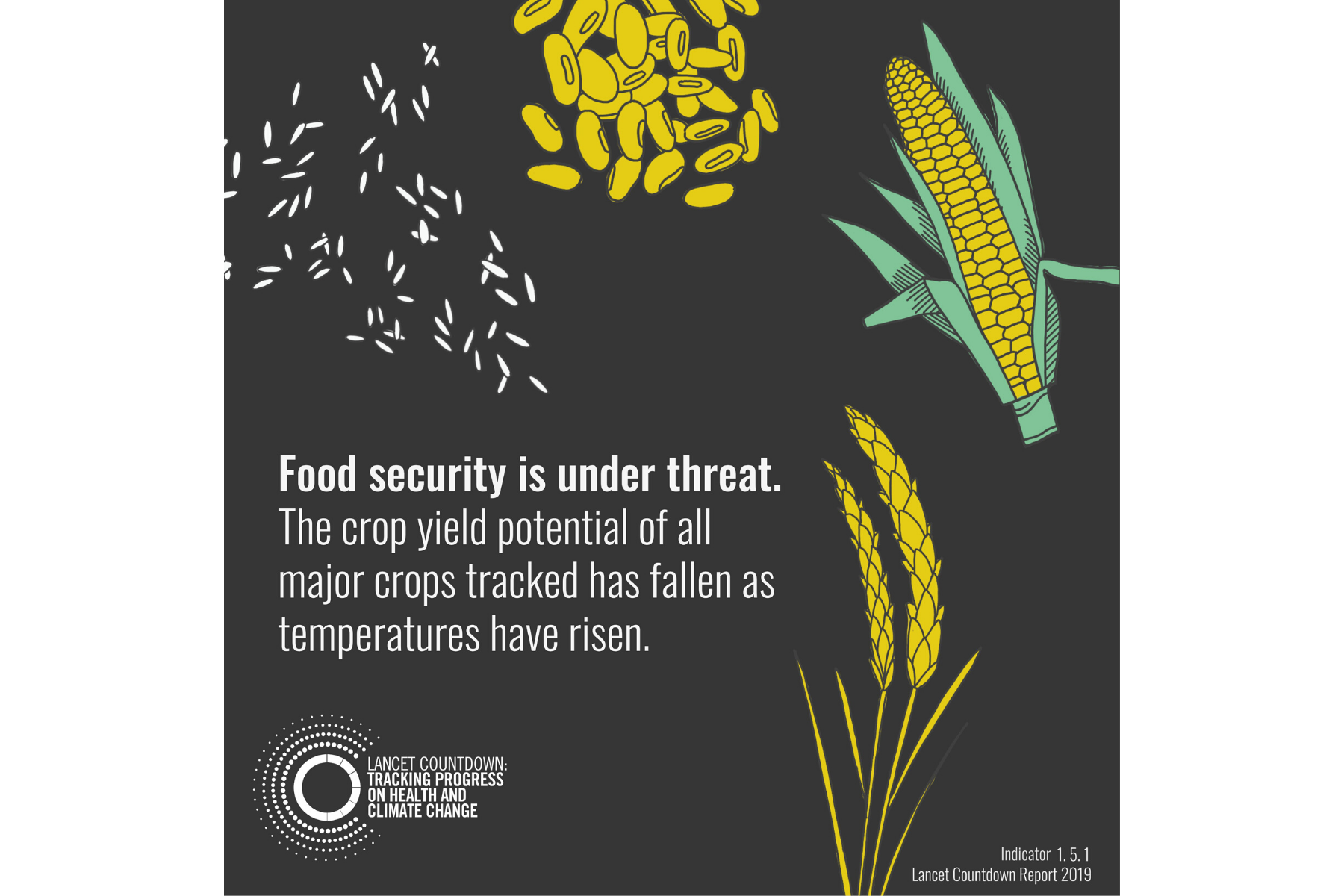 As the world heats its weather becomes more extreme. This was foreshadowed by the heatwaves that baked the northern hemisphere in 2018 and 2019.

“Vulnerability to extremes of heat in China is high and rising dramatically, with almost a third of over 65s now at risk of heat exposure – a 25% increase since 1990,” said report co-author Dr Wenjia Cai of Tsinghua University.

“Urgent steps are needed to help people adapt to high temperatures, particularly the urban elderly with underlying health conditions. But without immediate action to cut greenhouse gas emissions, China is likely to experience a large increase in heat-related mortality,” he added.

Wildfires are another cause for concern. Of the world’s 196 countries, 152 have experienced an increase in people exposed to wildfires in the last decade, with China seeing the largest growth after India.

Burning fossil fuels remains by far the main cause of warming and air pollution. In China, outdoor air pollution contributed to 900,000 premature deaths in 2016, with coal linked to over 199,000 of these, the report states.

Young people are worst affected “as their lungs are still developing, so polluted air takes a great toll, contributing to reduced lung function, worsening asthma, and increasing the risk of heart attacks and stroke”. The damage is cumulative and lifelong.

The outlook for disease is also worrying. 2018 was the second most climatically suitable year on record for the spread of bacteria that cause much of the world’s diarrhoeal disease and wound infection. The climate is improving for the transmission of cholera, dengue fever and malaria. 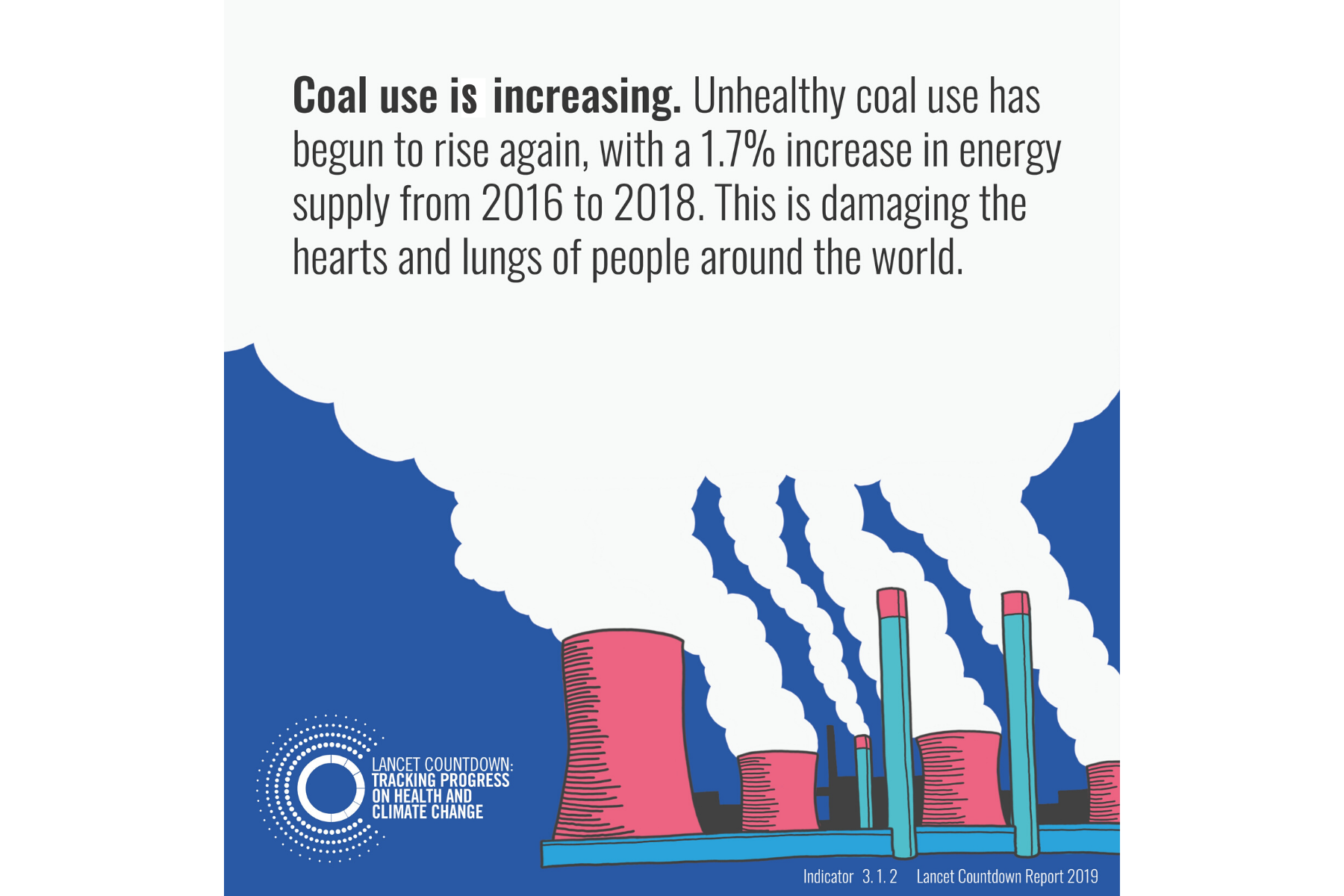 On food security, the report highlights that crop yield potential has been declining in China since the 1960s. Specifically, maize has fallen by 4%, winter wheat by 5%, soybean by 4% and rice by 3%. These declines will intensify as the planet warms, sending up food prices.

This issue has been drawn sharply into focus in China this year by a non-climate-related pandemic: more than a third of the country’s pigs have died or been culled because of African swine flu, driving the price of pork to a record high.

A healthier path, to net zero

Despite the warnings, the report also frames climate change as an opportunity to improve human health by swiftly reducing emissions.

There are health benefits to be had from less emissions-heavy diets, comprising less meat and more vegetables, fruits, whole grains, legumes and nuts. Phasing out diesel and petrol vehicles would clean up urban air and lower risks of respiratory and cardiovascular disease. Cycling and walking can reduce problems associated with physical inactivity and obesity.

China has been steering ahead with cars: while overall vehicle production is falling, sales of electric vehicles are booming – though they still only accounted for 2.5% of overall sales in 2018.

The cost of accelerating the low-carbon transition must be balanced against the economic benefits of a healthier population. Healthcare costs aside, the report estimates that in 2018 extreme weather denied the world economy 134 billion potential work hours – 45 billion more than the 2000 baseline.

Moreover, in 2018 around 11 million people globally were employed directly or indirectly in the renewable energy industry – a 4·2% increase on 2016. Employment in the solar power industry increased by more than 7%, with China responsible for nearly two­ thirds of jobs in this industry.

On the changing shape of the energy pie, the report states: “Despite a small increase in coal use in 2018, in key countries such as China, it continued to decrease as a share of electricity generation.”

That trend is not assured, however, as recent signals from Beijing suggest energy security concerns are slowing the pace of the coal phase-out. China has been expanding its coal power capacity.

On the positive side, the authors note burgeoning global interest in climate change, especially from the young, as well as growing fossil fuel divestments, including by medical and health associations. But they maintain that a far bigger response is needed if the Paris Agreement target of limiting heating to 2C is to be met.

For that to happen, a child born today would see a world of net zero carbon emissions by their 31st birthday, requiring a 7.4% year-on-year fall in emissions between now and 2050.

“Global economic benefits are likely to be maximised (and costs minimised) if strong policy action is taken as soon as possible to accelerate the low­-carbon transition.” 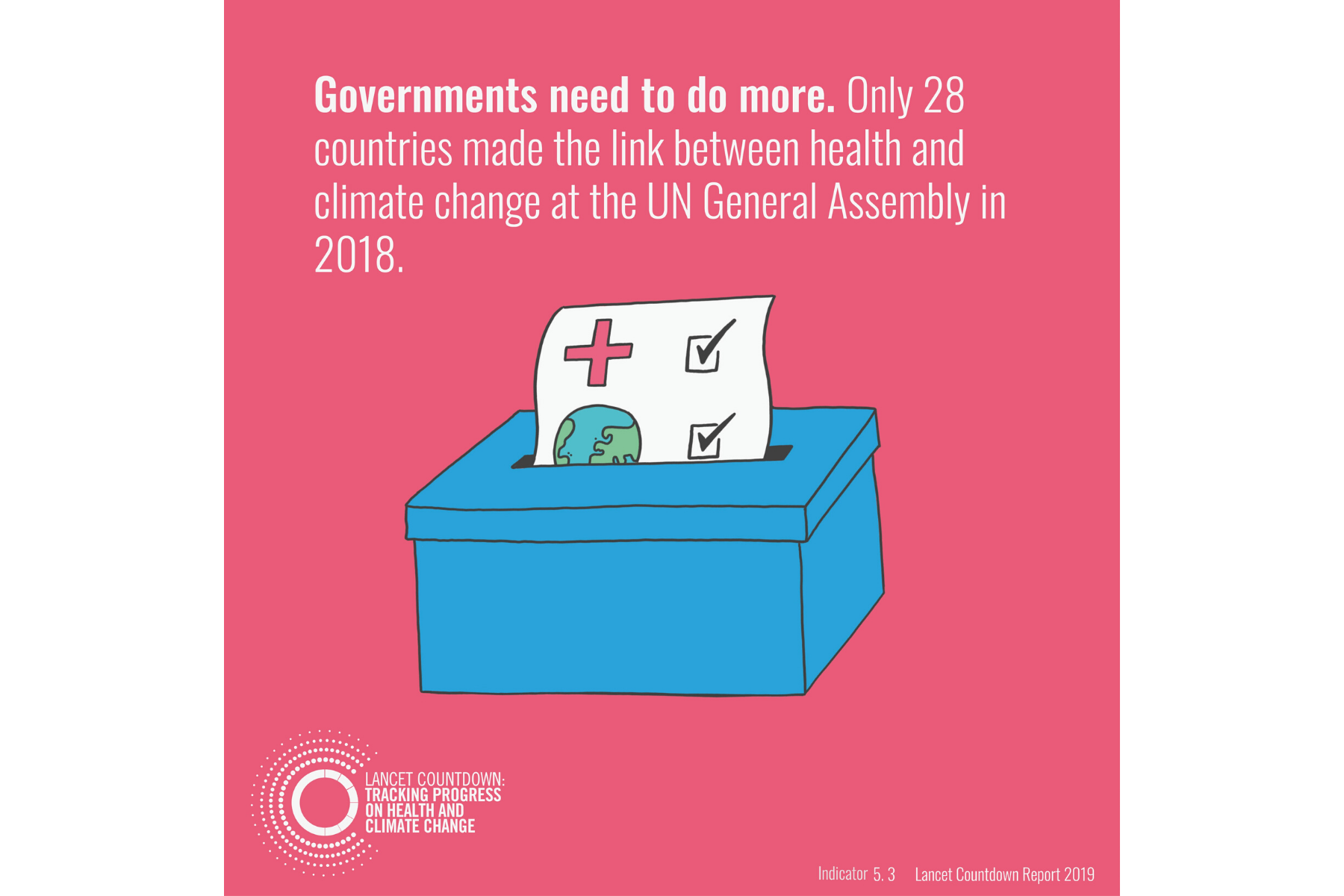 The media plays a role in helping policymakers and the public make sense of climate change and its effects. This year the Lancet report analysed China’s most-read newspaper, The People’s Daily, for the first time. It identified an average of 2,519 articles discussing climate change published annually between 2008-2018. But only an average 14 of those (0.6%) were about human health. Media coverage in China rarely links extreme weather events to climate change, tending to focus instead on the people affected and efforts to help them.

The report authors called on next month’s UN climate talks in Madrid – COP25 – to help join the dots between the climate crisis and health by putting it firmly at the top of the agenda.

Have Chinese youth gone cold on the climate?