Nature loss is accelerating worldwide at an unprecedented rate, with grave impacts for human wellbeing, according to a major report approved by more than 130 of the world’s governments.

The report, launched in Paris, France on Monday, says fundamental changes are needed to everything from farming and fishing to private investment and governance to ensure the benefits continue to flow.

While such warnings have been heard before, this is the most comprehensive assessment to date, and the first that governments have come together to endorse. The findings are set to influence world leaders who are meeting in China next year, aiming to reach a new global agreement on biodiversity.

“The evidence is incontestable,” said Robert Watson, chair of the Intergovernmental Science-Policy Platform on Biodiversity and Ecosystem Services (IPBES), which produced the report. “Our destruction of biodiversity and ecosystem services has reached levels that threaten our wellbeing at least as much as human-induced climate change. We have a closing window of opportunity to act, and narrowing options.”

The report is the result of three years of work by hundreds of scientists who have reviewed 15,000 sources of information. It shows how nature is crucial to humanity, providing food, water, energy and medicines, as well as livelihoods and cultural and spiritual fulfilment. But it shows too that many species are fast declining in range and numbers, and that the services ecosystems provide, such as water and carbon storage, seed dispersal and pollination, are breaking down.

Humanity has “severely altered” three-quarters of the planet’s land surface, it says, adding that one million species are threatened with extinction, many within decades. Watson said the continued loss of biodiversity “will undermine the ability of most countries to achieve most of the Sustainable Development Goals”, which all UN member states have pledged to achieve by 2030.

While climate change will make all of this worse, so too could some efforts to prevent global warming. IPBES says, for example, that plantations of bioenergy crops can have negative impacts on biodiversity and on ecosystem services that are key to food and water security. 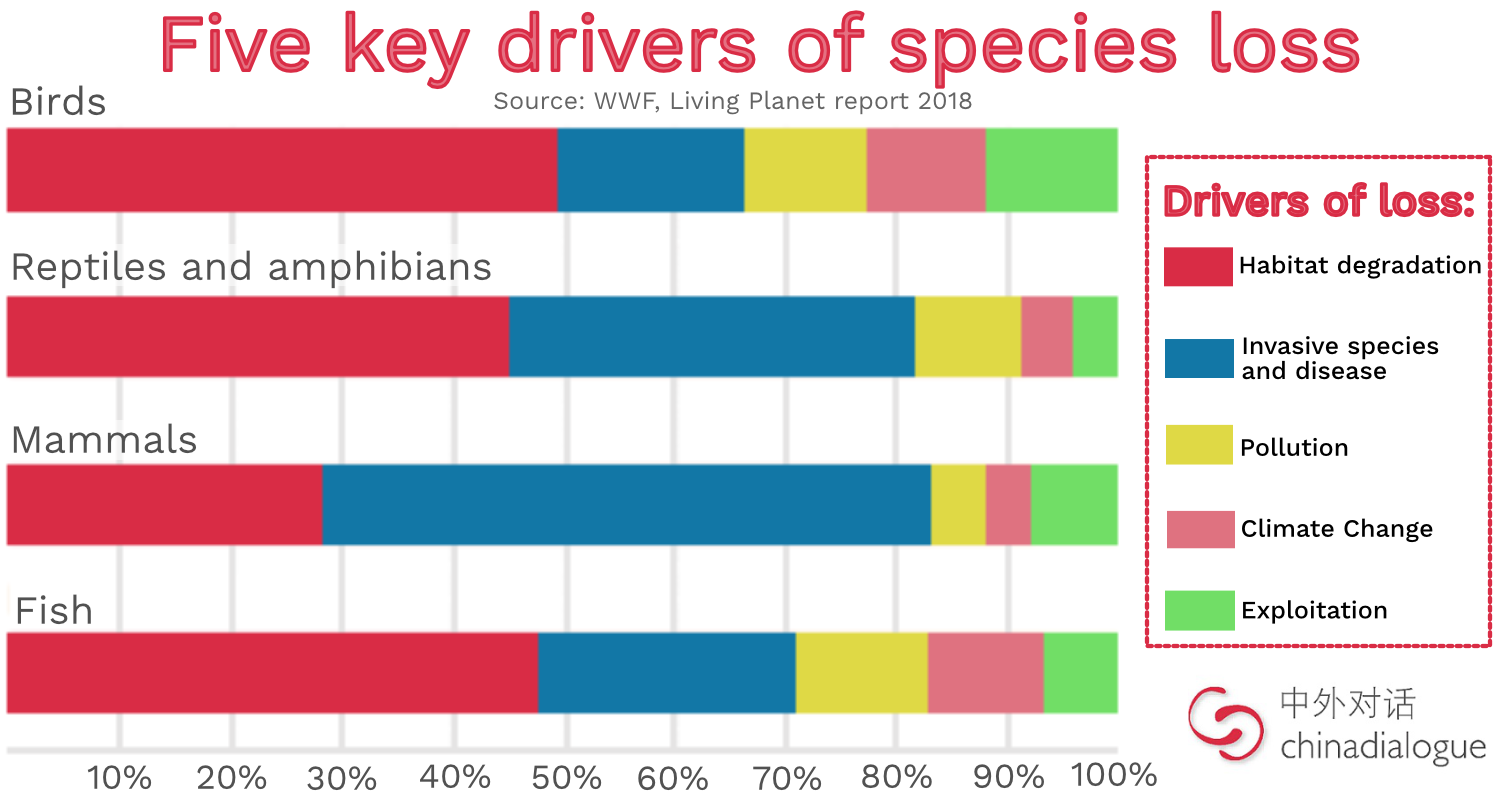 The IPBES report is global in scope and makes grim reading for all regions. It warns, for instance, that if the current trends continue “there could be a substantial decline in the economic and non-monetary value of nature’s contributions” to people across Asia in coming decades. With its diverse landscapes and rapid development, China exemplifies many of the problems and potential solutions IPBES describes.

The country has established many protected areas and greatly increased its forest area in recent years. But it also faces significant conservation challenges, particularly in its drylands, lakes, rivers and coastal wetlands, of which less than half of the original area remains. These include overexploitation, pollution, extractive industries and invasive species, which IPBES has said are “key biological threats to China’s social development and ecological security”, costing US$17 billion each year.

According to IPBES, the number of invasive species harming China’s agricultural ecosystems has been growing by about three species a year since 1900, with a faster rate of increase in the past 15 years. This is a huge threat, particularly to China’s 193 million small farms, which are living repositories of crop diversity. That biodiversity is also threatened by economic forces. In response to market demand, many subsistence farms are being replaced by commercial monoculture. The loss of traditional crop varieties and associated local farming knowledge is removing options that could be crucial to efforts to adapt to a changing climate.

“This is a threat to the sustainability and resilience of the whole traditional farming system,” said Yiching Song, of the Centre for Chinese Agricultural Policy of the Chinese Academy of Sciences. At the same time however, said Song, there is growing demand in China for safe, good quality and varied food because of rising incomes, food safety issues and increasing concern for the environment. “This is good news and an opportunity for crop biodiversity protection and farmer seed system enhancement,” she said.

Bringing about a revolution

Only “transformative change” can prevent further declines in humanity’s natural life-support systems by 2050 and beyond, says the IPBES report. “By transformative change,” said Watson, “we mean a fundamental, system-wide reorganisation across technical, economic and social factors, including paradigms, goals and values.”

Among other things, the report calls for better ways of producing and using food, energy and water, more inclusive decision-making and governance of natural resources, new frameworks for private investment and incentives for environmental protection. It urges governments to ensure that policies in all areas from health to housing, from defence to finance, take account of biodiversity. And it gives examples of effective policies, practices and governance structures to conserve and sustainably use biodiversity. 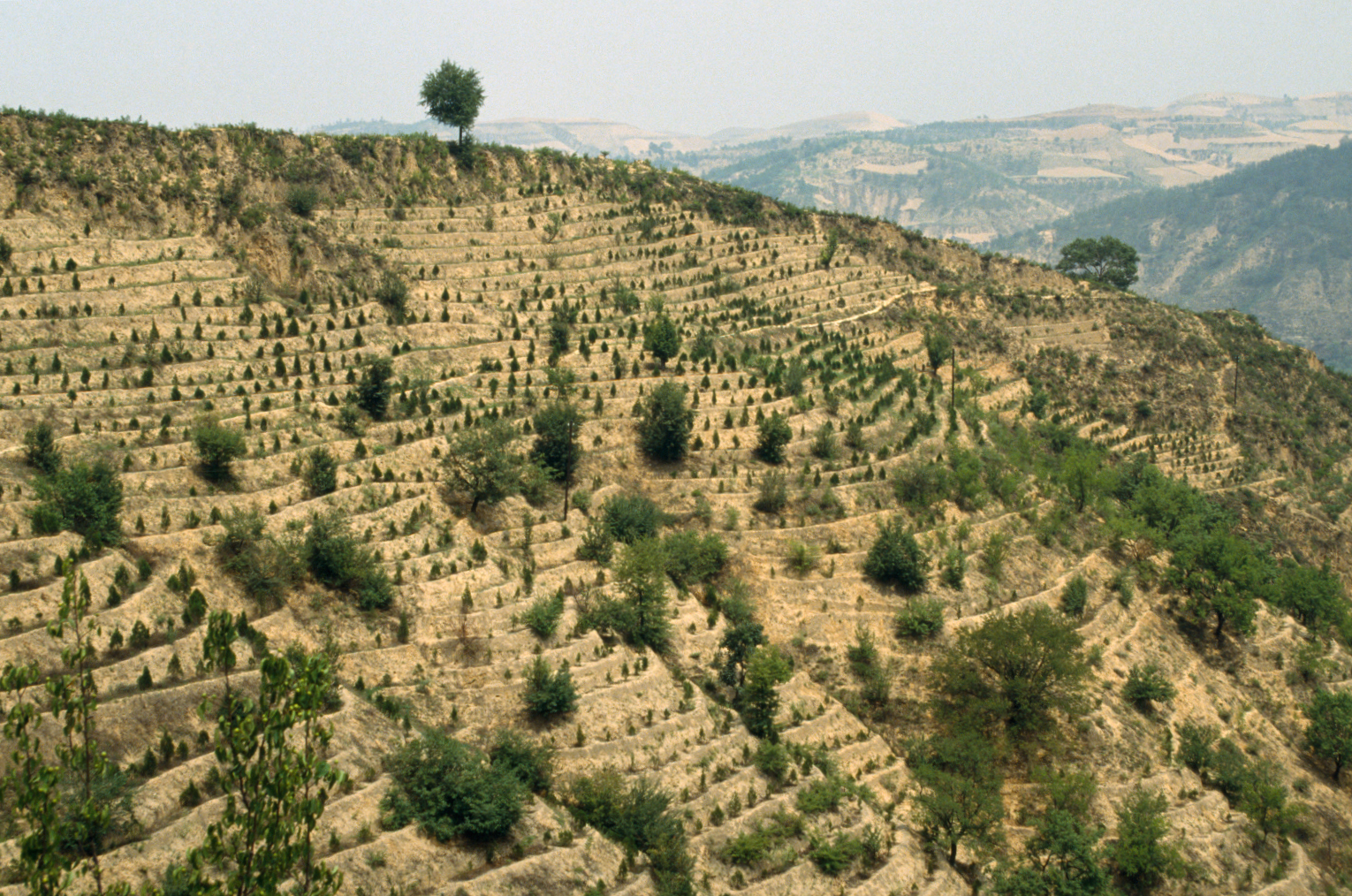 One example that IPBES highlights is China’s Sloping Land Conversion Program (or Grain for Green), the world’s largest reforestation effort. By paying farmers to plant trees on their land and providing degraded land to rural families to restore, it has transformed more than 15 million hectares of degraded agricultural land and 17 million hectares of barren mountainous wasteland to natural vegetation. Though at a local level some results have been more mixed.

“The figures are really big – US$40 billion spent, over 30 million hectares of land restored and some 32 million households engaged,” said Himlal Baral, a senior scientist at the Center for International Forestry Research, based in Indonesia. “This is a great restoration effort and many countries can learn lessons from this. It shows that if you put in economic incentives, there is potential to restore degraded and marginal land.” He noted that while some of the programme’s benefits such as soil and water conservation and landslide protection are local, the carbon storage achieved by planting so many trees benefits the whole planet.

Having worked in China for several decades, Jianguo (Jack) Liu, a professor at the Center for Systems Integration and Sustainability at Michigan State University is hopeful. “Enormous change has already taken place,” he said. “The government has increasingly paid attention to the environment. That is very positive, of course, but there are still challenges to be addressed.”

Liu pointed out that, in the past, assessments of government officials were based on gross domestic product (GDP) and took no regard of environmental performance. “The higher the GDP, the more likely someone would be promoted,” he said. “Now, they are evaluated by environmental and economic performance. If you have had a bad environmental record, you will be punished and will not be promoted.” Liu said he would like to see this approach “scaled up, implemented and enforced nationwide.”

All eyes will be on China’s efforts to conserve nature next year, when Kunming, the capital of Yunnan province in southwest China, hosts the 15th Conference of the Parties to the UN Convention on Biological Diversity (CBD). Representatives of nearly 200 governments will meet there to agree a new 10-year framework to halt biodiversity loss and protect ecosystems. It could be a sombre meeting, as delegates will confirm that progress towards the last agreed targets, set in Aichi, Japan, in 2010, has been abysmal. The IPBES report suggests that most of the 20 Aichi targets will be missed.

“The IPBES Global Assessment tells us how much we have achieved, where we are on track, where we are not, why, and what the options are for moving forward,” said the CBD’s executive secretary, Cristiana Paşca Palmer, who added that it will make an “invaluable contribution” to the process of setting ambitious, achievable targets in the post-2020 global biodiversity framework.

“The assessment also shows that threats to biodiversity cannot be addressed by governments alone,” said Paşca Palmer. “In fact, it underscores the urgent need for transformational change to safeguard nature and the ecosystem services that underpin all life. This requires everyone to get involved – including businesses, communities and individuals – as we lay the foundations for an even more ambitious biodiversity agenda for the next decade.”