A “crisis footing” is needed to conserve, restore and use land sustainably, according to a major report that warns of food supply disruptions, forced migration and rapid biodiversity loss. Unless countries scale up action, there will also be a higher risk of zoonotic diseases like Covid-19, declining human health and land resource conflicts.

In the second edition of its “Global Land Outlook” report on land degradation, the UN Convention to Combat Desertification points to global food systems as the primary cause of the problem, being responsible for 80% of deforestation, 70% of freshwater use, and the single greatest cause of terrestrial biodiversity loss.

In a press conference to launch the report on 27 April, UNCCD Executive Secretary Ibrahim Thiaw said that global food systems – and non-food crops such as cotton – were no longer tenable. “We thought that we had more reserves and therefore we could deplete the land and then shift to the next area. Now we realise that is not possible. We have already eaten our reserves.”

He added that consumption was not sustainable either, with wasted food, water and clothing exacerbating the problem.

Land degradation occurs when land cover is lost or removed, causing soil and organic matter to be washed or blown away. Salinisation of soil can produce similar effects and reduce land productivity. It can cause expansion and movement of sand dunes, diminished rainfall, depletion of pastureland and erosion from wind and rain.

The report projects the consequences of three land use scenarios by 2050. If current trends continue to 2050, additional land the size of South America will be degraded, hitting crop yields, particularly in sub-Saharan Africa, the UNCCD predicts. Climate change will be exacerbated as a result, with degraded soils emitting an additional 69 gigatonnes of carbon from 2015 to 2050, the equivalent of 17% of current annual greenhouse gas emissions, it states.

However, if around 35% of the 5 billion hectares of global agricultural land area is restored using agroforestry, grazing management and assisted natural regeneration, crop yields could increase by 5–10% in most developing countries. The Middle East and North Africa, Latin America, and sub-Saharan Africa would benefit the most, with food price increases limited. Under this scenario, carbon stocks would rise by a net 17 gigatonnes between 2015 and 2050 due to gains in soil carbon and reduced emissions, while biodiversity declines slow down.

The possible annual economic return on restoring and preventing land degradation could be as high as $140 trillion, around 50% higher than global GDP in 2021, according to the UNCCD

If the world moves towards systems that both restore and protect land for biodiversity, water regulation and soil conservation, around a third of biodiversity loss would be prevented, the report says. An additional 83 gigatonnes of carbon would also be stored. Avoided emissions and increased carbon storage would be equivalent to more than seven years of total current global emissions.

Governments have pledged to restore 1 billion hectares of land, an area roughly the size of China, as the report notes. This could be funded by spending US$1.6 trillion in the next ten years – a fraction of the $700 billion given in subsidies to the fossil fuel and agricultural industries, it says.

The economic returns of restoring land and reducing degradation, greenhouse gas emissions and biodiversity loss could be as high as $140 trillion every year – up to 50% more than the $93 trillion global GDP in 2021, it adds.

The report contains case studies of successful restoration projects from around the world, such as Africa’s Great Green Wall, which was launched in 2007 to restore lands across the Sahel – the region of Africa between the Sahara in the north and savannah in the south – through planting trees, shrubs and grasses in more than 20 countries.

The project is progressing well, according to the Institute for International Environment and Development (IIED), with more than 18 million trees planted in Senegal, 8 million in Nigeria, 129 million in Eritrea, and 146 million in Niger.

Farming could be transformed using traditional and modern regenerative food production practices, the UNCCD says, enabling agriculture to pivot from being the primary cause of degradation to the principal catalyst for land and soil restoration.

For example, the With One Seed project in Timor Leste has established village-based plant nurseries for seedlings and training for smallholders, who are paid annual incentives to plant and maintain trees. Since it began in 2009, it has involved nearly 1,000 subsistence farmers, and 20,000 trees have been planted, earning more than $400,000 from the sale of carbon credits. Crop yields have grown, and reforestation has improved soil and water quality.

The report has been published ahead of the UNCCD’s next meeting, its 15th Conference of the Parties (COP15), being held 9–10 May in Côte d’Ivoire. Governments, the private sector and civil society groups from around the world will meet with an overriding objective to boost the stature of land restoration in the international political agenda, according to Miriam Medel, chief of external relations and policy at the UNCCD.

Land degradation has not had the same attention as issues under other UN environmental conventions, the UN Framework Convention on Climate Change (UNFCCC) and the Convention on Biological Diversity (CBD). It first came to the world’s attention in the 1970s, when the Sahel suffered severe drought. 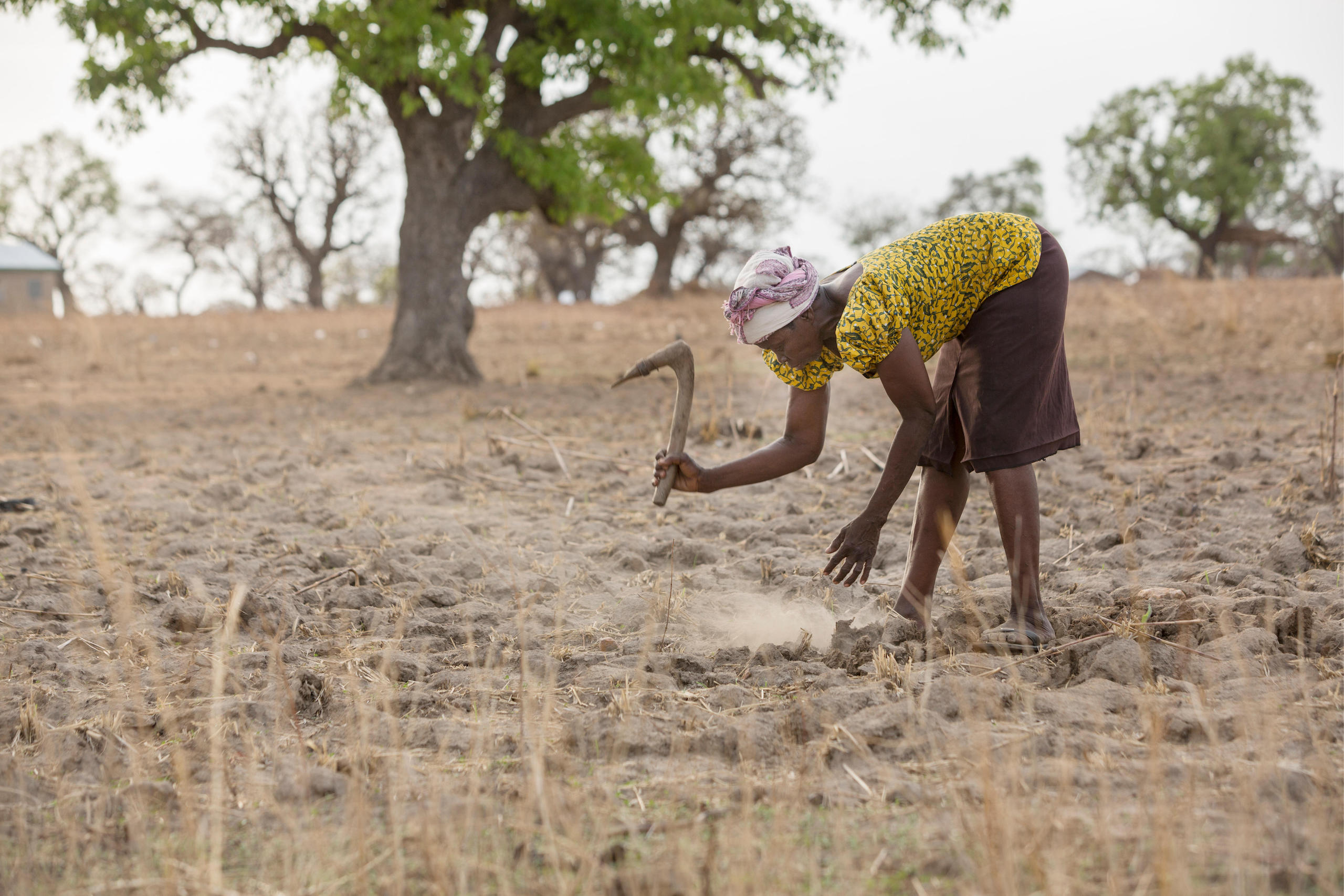 According to the IIED, an initial attempt by the UN to promote better land use policies – the 1977 Conference on Desertification (UNCOD) – did not achieve much, due to a lack of political will and funding, and a top-down approach that was not always appropriate to farmers and communities on the ground.

A campaign by African countries at the 1992 UN Earth Summit in Rio de Janeiro led to the creation of the UNCCD, with a remit to improve life for people in drylands, to maintain and restore land and soil productivity, and to mitigate the effects of drought. It moved to a more bottom-up approach and called for governments to give land users and charities more authority and resources.

Most countries affected by land degradation drew up action plans in line with the convention. Still, progress has been slow due to a lack of resources and a clear overarching goal, as well as quantitative, time-bound targets to guide action and make measurable progress, IIED said.

UNCCD then decided on a new concept to drive progress: land degradation neutrality (LDN), under which the expected loss of productive land is counterbalanced with the recovery of degraded areas. LDN was enshrined in the 2015 Sustainable Development Goals, and the UNCCD urged countries to set targets to achieve LDN and incorporate it into state budgets.

The targets are voluntary, but 130 countries have now committed to LDN by 2030, and 80 of these have drawn up plans to achieve it. At the May meeting, “we expect to see an upscaling of these targets and plans, and also hopefully announcements by more governments of their targets,” Medel says.

The meeting will also discuss how to tackle problems with land tenure and gender so that land restoration projects are successful, Medel adds. Lack of clarity over land tenure, which defines the conditions under which people occupy, hold or manage land, can prevent farmers from adopting sustainable land management practices. People who have certainty over their land tenure are more likely to have food security, the UNCCD report asserts.

Gender equality is also a barrier to land restoration, since laws and customs in more than half of countries prevent women from owning or accessing land, even though they are often at the forefront of land degradation, working on the large area of agricultural land already affected by degradation.

The UNCCD COP will not be negotiating targets for land restoration or conservation, since these are being taken forward through the UN Convention on Biological Diversity, according to Barron Orr, UNCCD’s lead scientist. “Land degradation neutrality provides the ground floor – if we don’t get worse in net terms for each ecosystem type between now and 2030, and we actually start to move to net positive, everything else becomes possible,” he says

“This COP is about addressing the bottlenecks – land tenure issues, integrated land use planning, resilience and finance,” Orr adds.

The other major theme of discussions is drought, in terms of both mitigation and adaptation. The COP will look at integrating drought into UN work on climate change and biodiversity, putting early warning measures in place, and plans for coordinated responses, Medel says.

Restoring land will save the planet and fight poverty, and reduce migration and security risks. It is not only doable but desirable ­– and profitable

However, countries lack sufficient funds to implement their LDN plans, the IIED says. The UNCCD has, however, established a fund specifically to identify resources for LDN projects. The COP will also be attended by a number of funding bodies, including the UN’s Global Environment Facility, the Green Climate Fund, the World Bank and African Development Bank, according to Medel.

On the new report, Medel says: “The Global Land Outlook 2 proves very clearly that land restoration is a very cost-effective solution, and one that really brings a lot of benefits for many other sustainable development goals, including [fighting] climate change and biodiversity conservation.”

Thiaw was optimistic that restoration of 1 billion hectares of land was possible: “You will save the planet and at the same time fight poverty, reduce migration and security risks. It is not only doable but also desirable – it is actually a profitable investment.”

IPCC report is ‘blueprint for a future on the planet’