If asked to picture a beekeeper, most people would probably imagine someone in a head-to-toe white outfit resembling an ill-fitting spacesuit, complete with a hat and veil, pottering around a field of stout wooden boxes. And most of the time, that image would be right.

But some beekeepers do things very differently.

Piotr Piłasiewicz currently looks after eight honeybee colonies that live high up in the pines and spruces of Augustów Primeval Forest in northeast Poland. He is a founding member of Bractwo Bartne – the Tree Beekeeping Brotherhood – an organisation that works to preserve a tradition practised in Central Europe since the Middle Ages.

Their tree beekeeping approach is dedicated to the bees themselves rather than the profit they bring from honey. “Who brought bees to the ground? Humans did. We [the brotherhood] try to adapt our behaviour to this species, rather than adapting the species to our needs,” Piotr says.

For Piotr and his team, their relationship with the bees is reciprocal. They carve hollows in trees and build hives for wild bees to nest in, visiting regularly to ensure no unwanted visitors, such as hornets or birds, move in before the bees. They occasionally harvest honey in return, but only when the bees make a surplus. “We take just enough for a thank you gift for what we do,” says Piotr.

The brotherhood is part of a growing community of beekeepers, researchers and conservationists around Europe that promotes a hands-off approach to raising honeybees. They view bees as wild, not domesticated, and endeavour to respect the insects’ ecology as much as possible.

A natural home for bees

“The hives I use are designed to mimic what bees want in the wild,” says Matt Somerville, a carpenter from southwest England and founder of Bee Kind Hives. He travels to farms and gardens around the UK, setting up what he calls “freedom hives” – hollowed-out logs around a metre long and 45 cm in diameter, kept high up in trees. They are a far cry from the Langstroth hive, the familiar rectangular box lined with multiple frames, designed for convenient honey extraction. 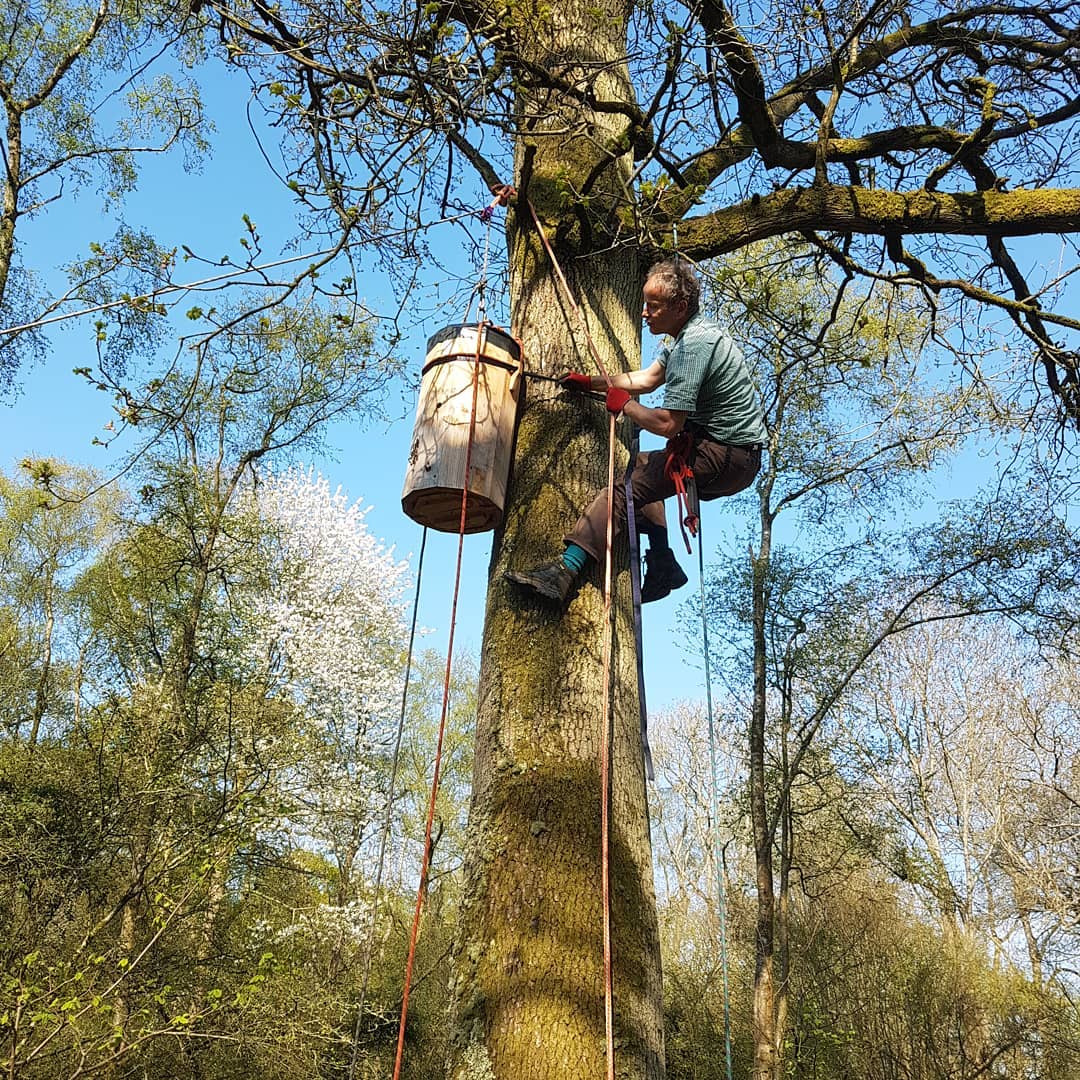 Matt Somerville fixes one of his log-based “freedom hives” to the side of a tree in April 2020. “The cherry tree in the background was alive with bees,” he recalls. (Image: Matt Somerville)

He uses a chisel to roughen the inside wall of the hive, which allows the bees to coat them with propolis, a sticky resin made from wax and bee saliva. Naturally antibacterial, propolis plays a key role in keeping honeybee colonies healthy. The smooth walls of a Langstroth hive make it hard for bees to practise this hygienic behaviour.

Somerville covers the top of the hive with a layer of insulation to keep the bees warm during winter. This is important, he explains, because a properly insulated hive means the bees expend less energy and are more likely to survive in today’s “depleted floral kingdom”.

Finally, he hoists himself several metres up the trunk of a suitable tree and fixes the hive with straps. Near the tree canopy and away from the damp ground air, it is just like a tree cavity in which wild bees typically nest. All that’s left is to wait for a swarm to come and make it their home. 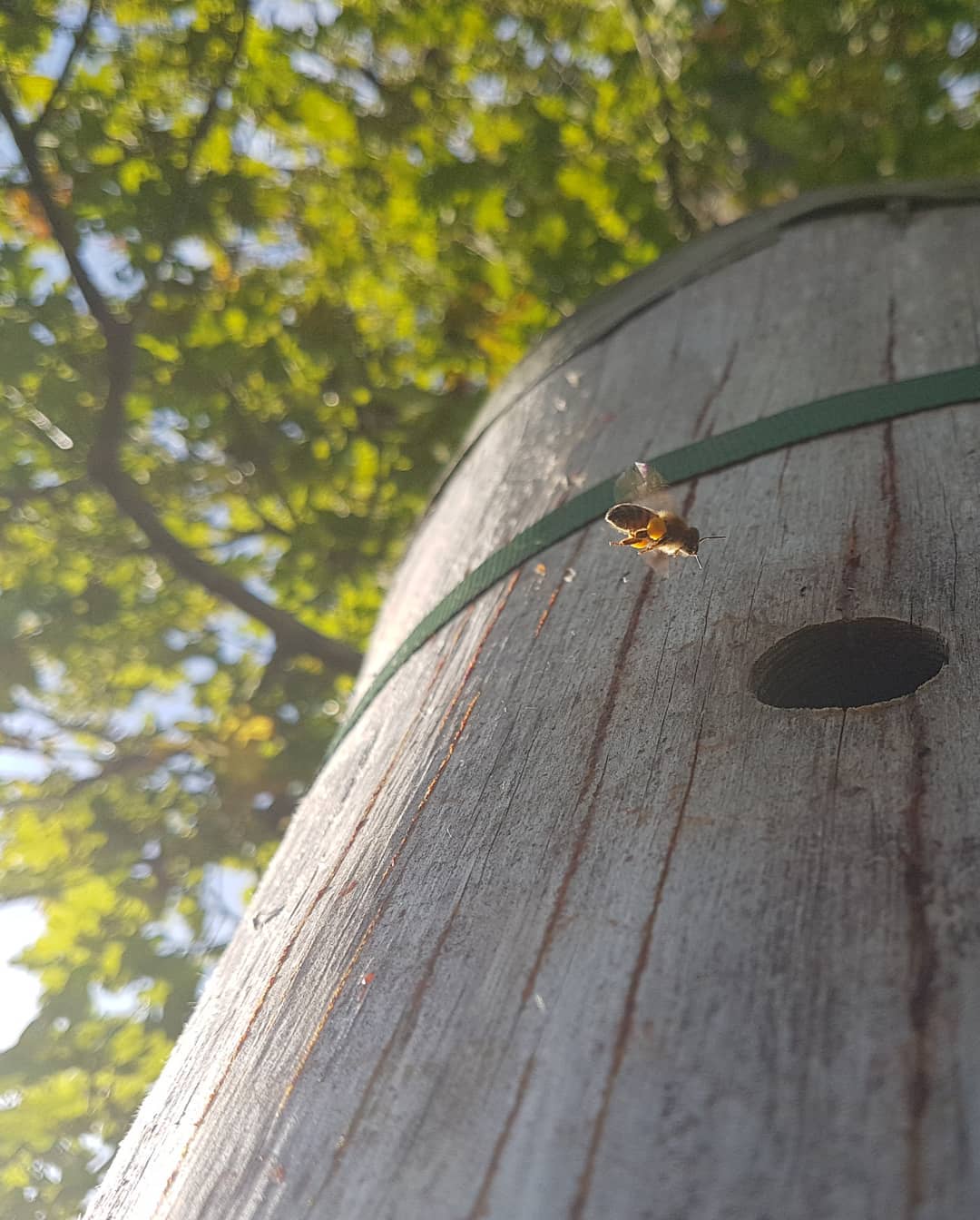 A bee laden with pollen and nectar enters a “freedom hive”. The bees have filled the cracks in the wood with propolis, a sticky resin with antibacterial properties. (Image: Matt Somerville) A “freedom hive”, seen here from below, is a window into the insects’ world. In the wild, bees build honeycomb downwards in unique, undulating rows. (Image: Danielle House)

Once a colony moves in, they are largely left to their own devices. “I don’t intervene,” says Somerville. “They’re not my bees.”

This is in stark contrast to modern beekeeping, which has become a very hands-on occupation over the last three decades. The rapid loss of forest habitats and food sources has made honeybees more vulnerable to biological threats, especially parasites. Beekeepers frequently monitor colonies for parasites and apply a range of chemical treatments, fearing the bees may otherwise be wiped out.

Managed honeybee colonies – those kept in human-made hives for the purpose of harvesting honey – die off in huge numbers every year. In 2020–21, beekeepers in the United States lost an estimated 46% of managed bee colonies, according to a recent survey. The latest data from beekeepers in 35 European countries for 2018–19 indicate an overall loss of 17% of colonies.

The causes are complex, but one of the main culprits is the parasitic varroa mite. Varroa attack and feed on honeybees, weakening their immune systems and infecting them with viruses. Disease builds up over time and often kills the entire colony.

Bees also don’t have enough to eat, explains Margarita Lopez-Uribe, associate professor of entomology and a pollinator health specialist at Penn State University in the US. Bees feed on nectar and pollen from flowers but are struggling as biodiverse forests and meadows have been replaced by monoculture farms. “We have been converting land to agriculture at a massive global scale,” says Lopez-Uribe.

To make matters worse, the food available to bees is often contaminated with pesticides. The use of neonicotinoids, a class of insecticide known to cause confusion, paralysis and death in bees, is on the rise globally, despite an EU ban in 2018. The US Environmental Protection Agency is about to extend the permit for the chemicals’ use for the next 15 years.

There is evidence that intervening less can help honeybees adapt to some of these threats.

Researchers have documented numerous wild or “feral” colonies capable of tolerating varroa mites without chemical treatment. A study published last year reported over 1,300 sightings of significant wild honeybee populations surviving in the urban environment of Belgrade, Serbia, over the course of six years.

“If you leave bees in a natural condition, they are going to develop different mechanisms to deal with mites,” says Lopez-Uribe. 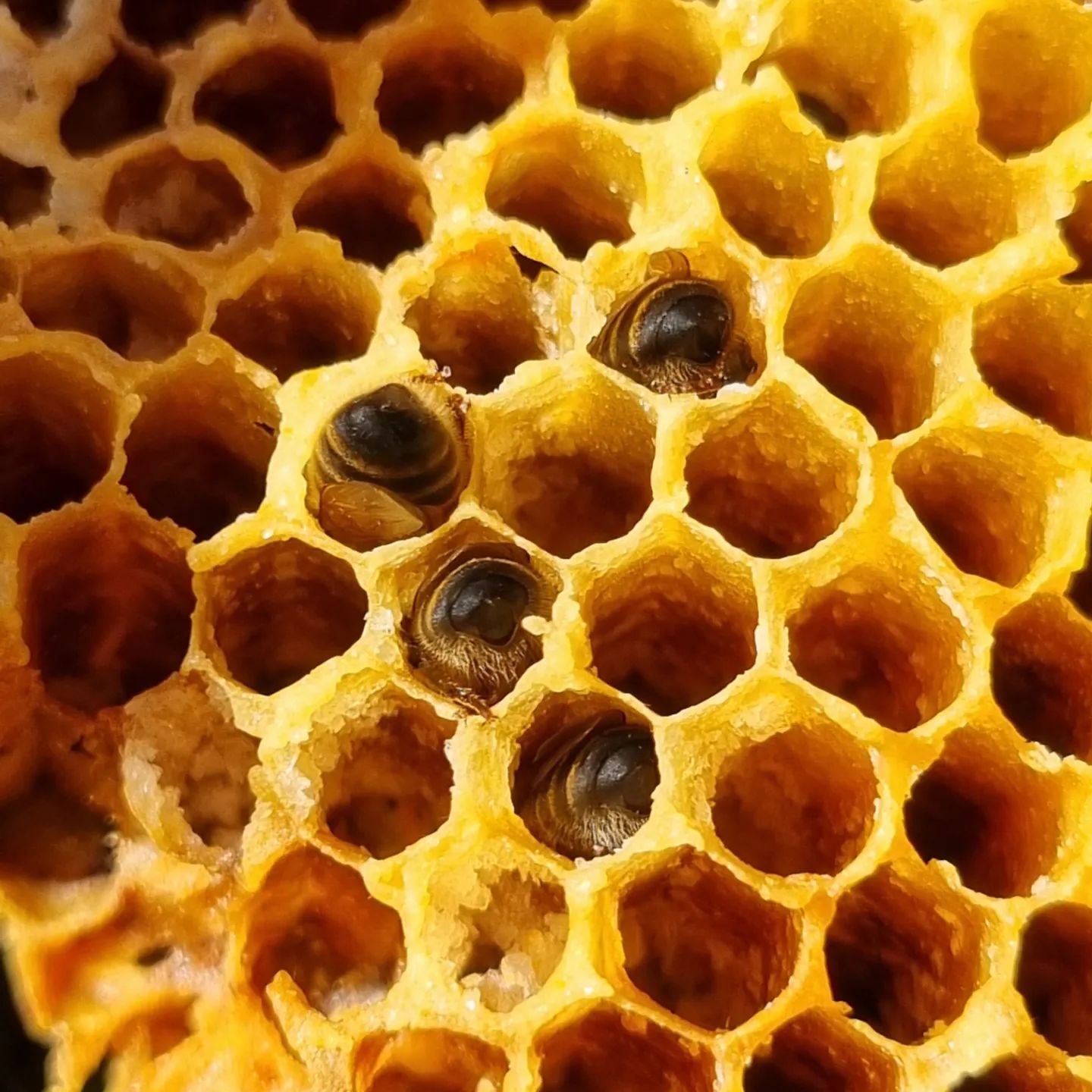 This wax comb, from one of Somerville’s “freedom hives”, was built by a colony of bees that didn’t survive the winter. “Other bees that had found this hive were making use of the honey,” he says. (Image: Matt Somerville)

To test this, some scientists are experimenting with honeybee “rewilding” projects by allowing bees to reproduce as they would in the wild so natural selection can occur. One such scientist is Delphine Panziera, honeybee pathology specialist and coordinator of the National Reference Laboratory for bee diseases at Wageningen University in the Netherlands.

Panziera says that without treatment some bees will succumb to varroa, but those with mite-tolerant genetic traits survive, pass on their traits to their offspring, and each new colony gradually becomes more tolerant of the mite. This is sometimes called “Darwinian beekeeping”.

“The genes that are truly important for adaptations to climate change and parasites will be selected for very strongly in those wild colonies because they don’t get any help from beekeepers,” says Panziera.

Back in Augustów, the Tree Beekeeping Brotherhood doesn’t think it’s necessary to step back completely.

For one, the tradition of tree beekeeping, which includes making products such as mead from the honey they collect, has deep roots in the region’s culture. The word for “tree beekeeping” in Polish – bartnictwo – even has a separate origin from the word for conventional beekeeping – pszczelarstwo. In 2020, the practice was inscribed in UNESCO’s Intangible Cultural Heritage list. 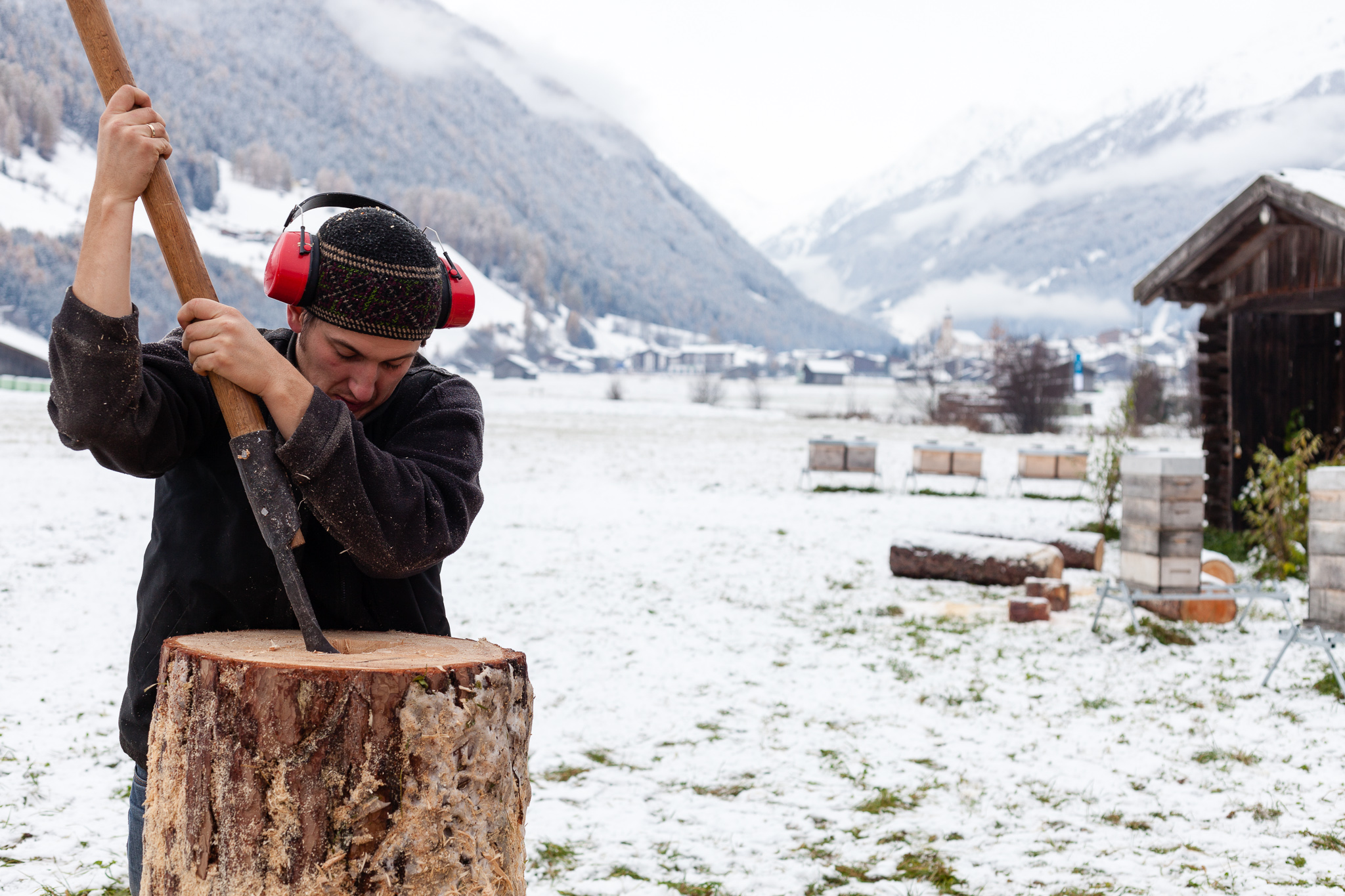 Piotr Piłasiewicz uses a gouge to hollow out a log hive. New hives are crafted during winter, so they can be hung in trees in the spring “swarming season”, when honeybee colonies look for new nesting sites. (Image: Bractwo Bartne) 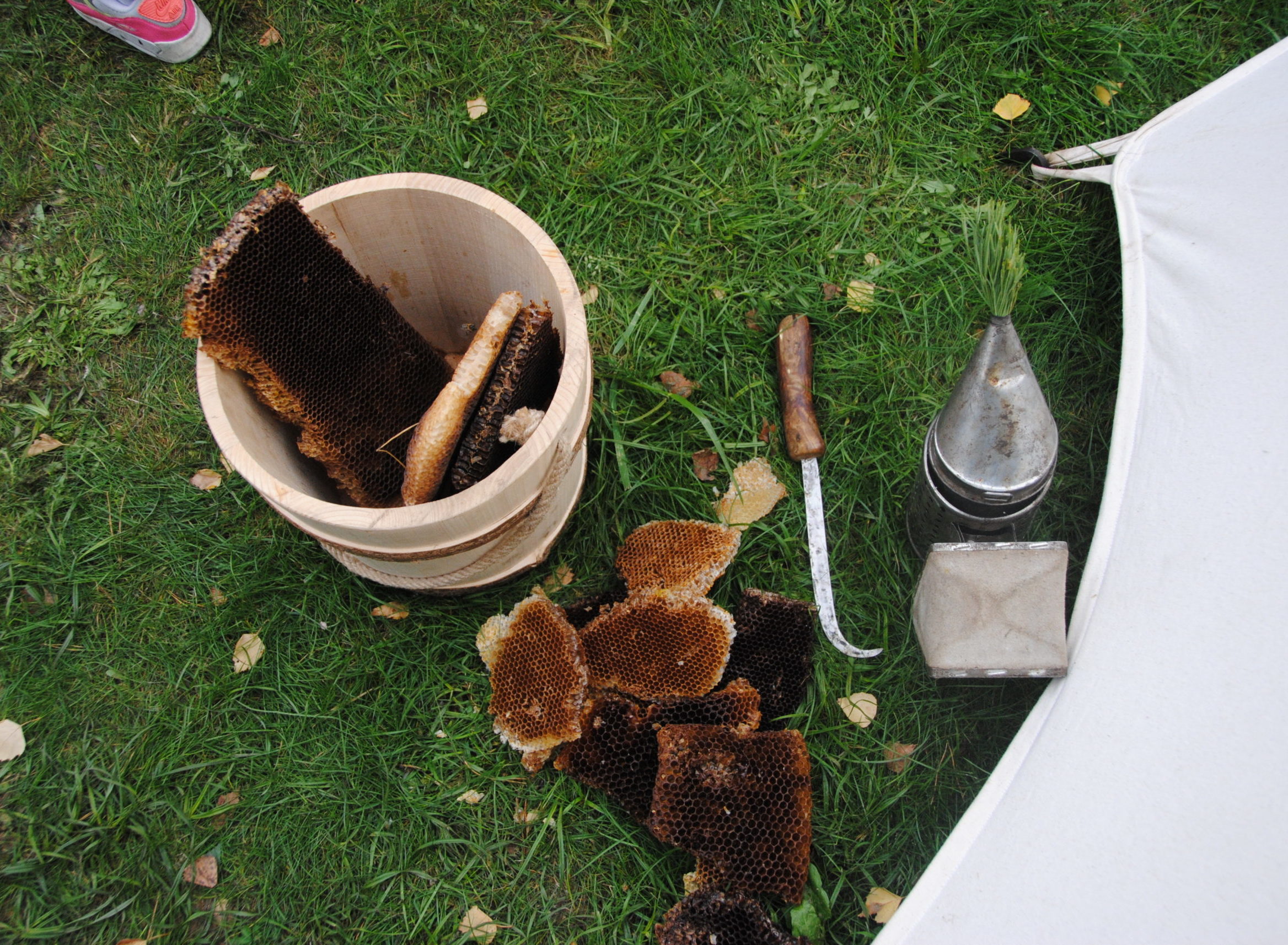 Honeycomb collected from a tree hive. Many in the wild beekeeping community don’t harvest honey at all, preferring to leave it for the bees. (Image: Bractwo Bartne) 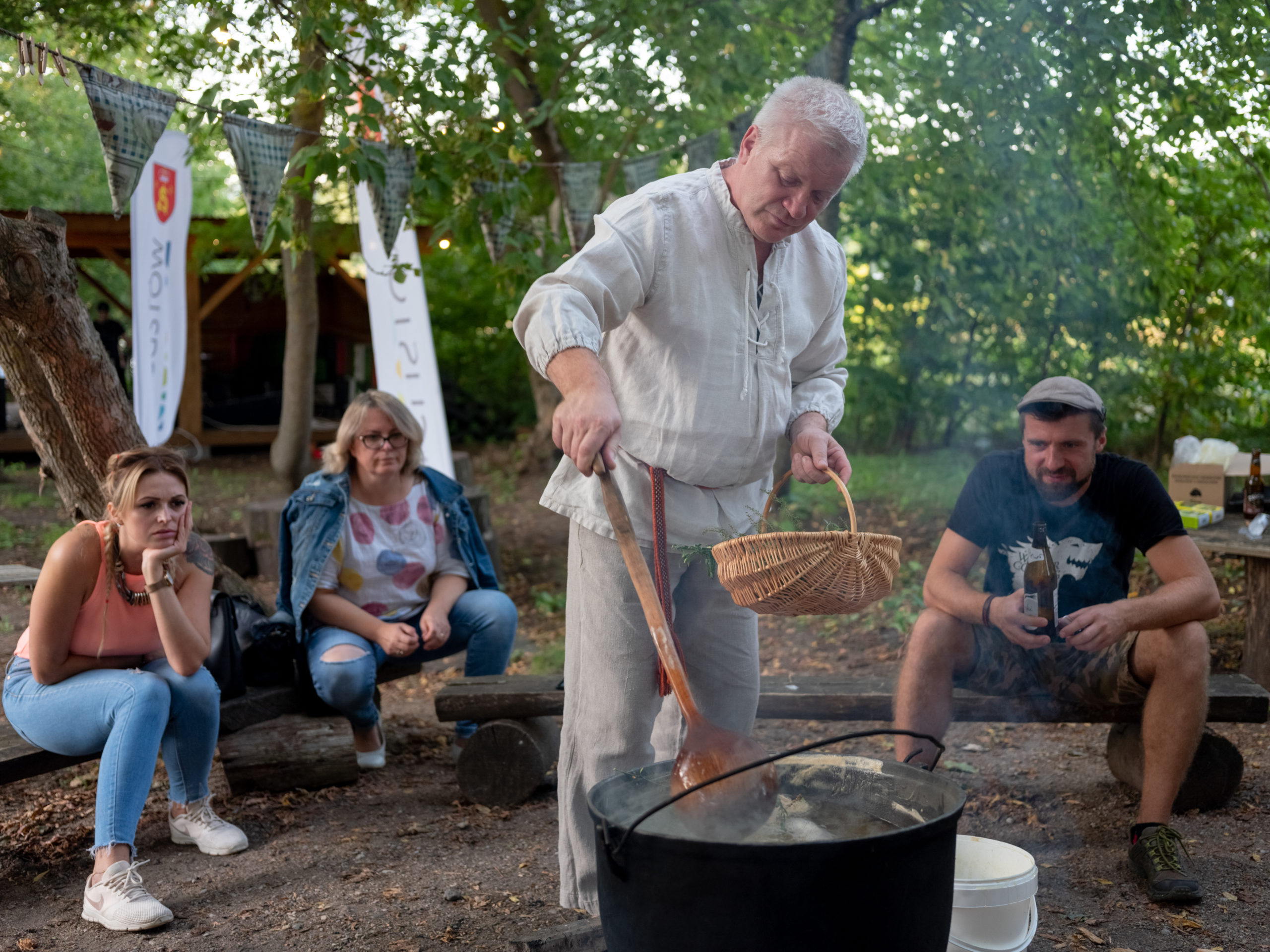 In addition, Piłasiewicz periodically checks in on his colonies to assess their health. If, for whatever reason, they haven’t been able to make enough honey to see them through the winter, he feeds them some honey from his stores.

For him, the pressures facing honeybees are too great to leave everything to natural selection: “The bees live in a bad environment, which we created. We changed the forest structure; we took from them the source of food that they collect. Why the hell can’t we feed them?”

Despite their differences, both Piłasiewicz and Somerville share a respect for the honeybee that they say is lacking in commercial honey farms. “Modern beekeeping is based on an industrial model from the Victorian age. It’s the same way we treat cows and pigs – as livestock,” says Somerville. “They deserve our reverence.”

Rethinking the human-nature relationship in China