Saiga antelope once migrated alongside woolly rhinos and mammoths across vast territories from the British Isles to Alaska. Between 45,000 and 10,000 years ago they were widespread in the northern hemisphere. Now the species’ range is mainly confined to the grasslands and deserts of Kazakhstan, and parts of Uzbekistan, Russia and Mongolia. 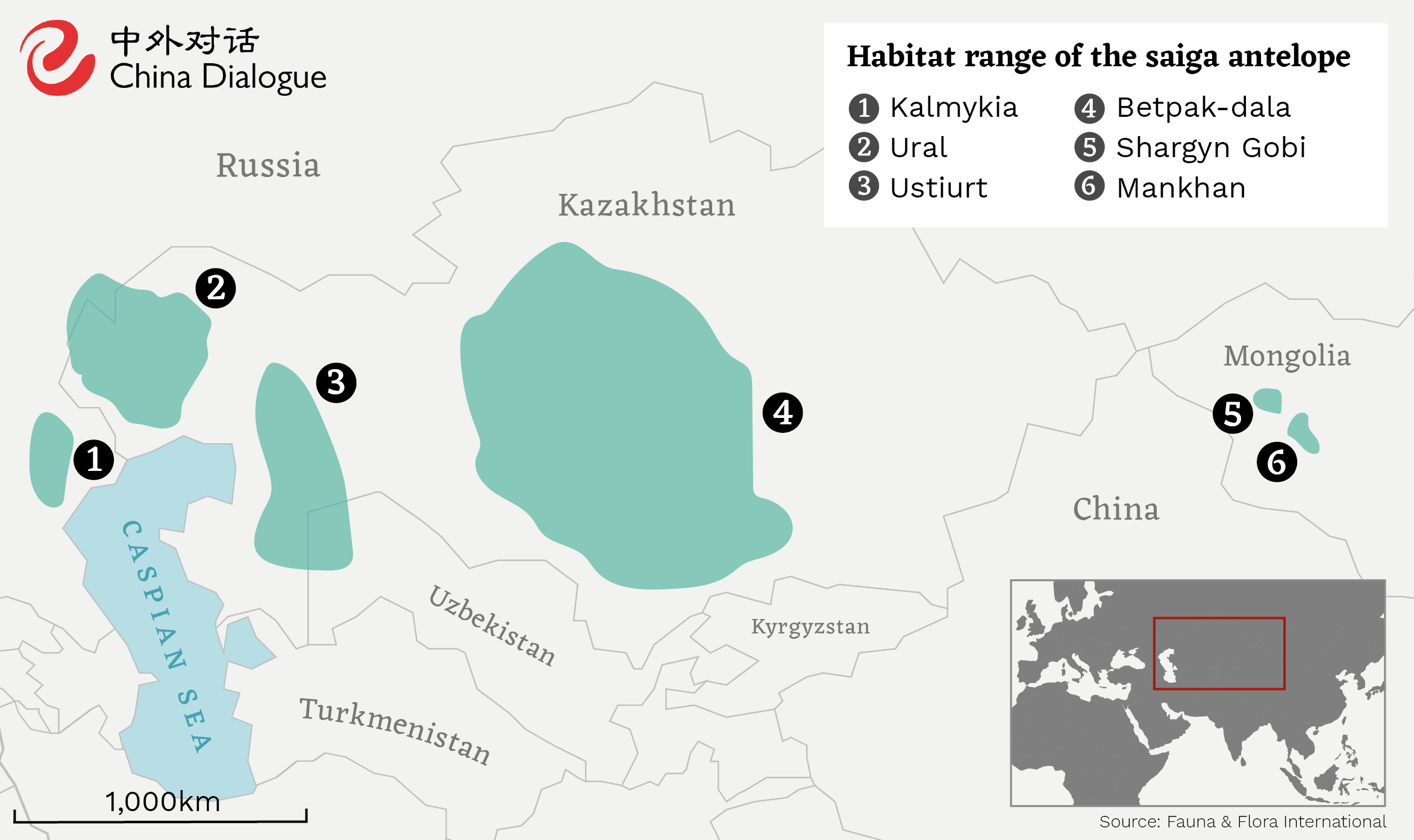 Known for its trunk-like nose, the saiga is classified as critically endangered by the International Union for Conservation of Nature (IUCN). Most people, however, only heard of it in May 2015, when more than 200,000 suddenly and mysteriously died in three weeks in Betpak-Dala, central Kazakhstan.

Conservationists report that the saiga populations in Kazakhstan and Russia doubled in 2019, to an estimated 300,000 individuals. This is predicted to reach 500,000 in the next two years.

Munib Khanyari, a researcher at the University of Oxford’s Interdisciplinary Centre for Conservation, said the saiga’s recent recovery “is largely due to the amazing effort of NGOs such as Association for the Conservation of Biodiversity of Kazakhstan, government authorities like Okhotzooprom [the agency that protects Kazakhstan’s wildlife], and park rangers, who build awareness, conduct patrols and limit poaching activities. This is not to say poaching doesn’t exist – it does and is always being considered in conservation plans.”

Conservationists are also cautiously optimistic after reports in June of a mass calving in the Ustiurt Plateau population in Mangystau, Kazakhstan. The birth of 530 calves doubled the population in that area in 2018. 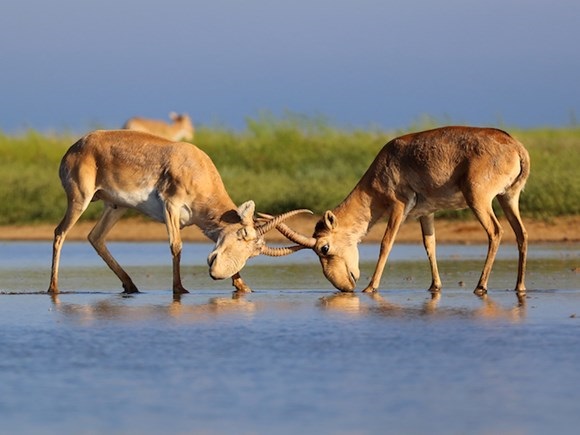 Researchers say saiga are resilient and, if given the chance, their population growth can be high.

“It is indeed a positive sign to discover a mass calving in the Mangystau region,” said Khanyari. “This population was known to migrate south to regions in Uzbekistan in the winter, but was affected by infrastructure projects like the railway and fences built around the Kazakh–Uzbek border. It will be important to monitor this population to see how it reacts to these infrastructure challenges.”

Poaching has not been eliminated

Poaching for the antelope’s horns and meat, which accelerated in the 1990s, continues to threaten it. The horn is used in a wide variety of traditional Chinese medicines, as it is believed to treat fever and sore throat. 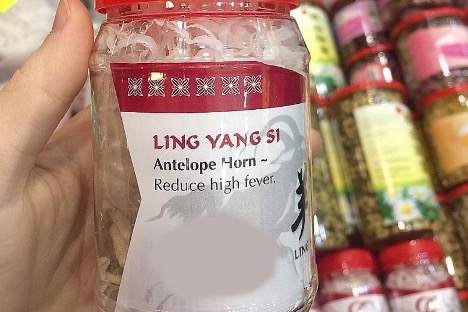 After China, Singapore is the biggest importer and conusumer of saiga. In both countries, horn and its derivatives are legally authorised for trade and consumption. Research suggests that one in five Chinese Singaporeans use medicinal products derived from saiga horn, which is commonly known as ling yang.

Medicinal demand is not the only threat. In September 2019, researchers concluded that the “rapid increase in poaching was in fact a direct result of the collapse of the Soviet Union and the subsequent loss of law enforcement and management capacity in the saiga’s range states, as well as rampant rural poverty”.

“I think poaching is not nearly at the levels reached after the collapse of the Soviet Union,” said Khanyari. “Right after [that] people almost overnight lost institutional support to rear livestock, and started to kill saiga for meat and also males for their horns. Selectively harvesting males [females don’t have horns] led to population crashes, as saiga are a harem breeding species [one male mates with several females].” 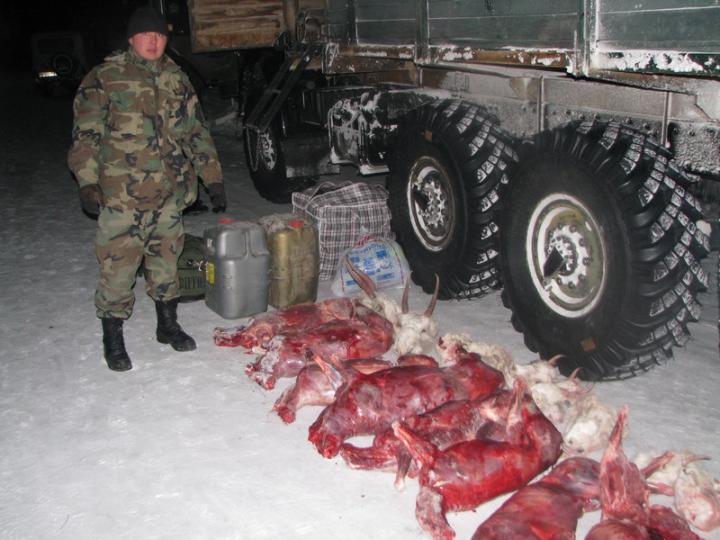 According to Orazbay Abdirakhmanov, who has written a number of books on the environmental challenges in the Aral Sea region, multiple factors caused the population to drop. These include uncontrolled poaching, physical borders negatively affecting migratory species and loss of habitat to industrial projects, such as oil and gas pipelines and railroads after 1990.

Scientists have identified another worrying cause of the species’ decline: climate-related and environmental stressors, which may exacerbate existing challenges. Research from British conservationists Richard Kock and Eleanor Milner-Gulland has linked mass-mortality events with high levels of humidity. “Most die-offs occur at a mean average maximum daily relative humidity of more than 80%,” they wrote in a recent paper. “In May 2015, atmospheric moisture was extreme with some of the highest recorded values for that time of year since 1948.”

Khanyari said: “Mass die-off is going to be a concern over the coming years. It is key our conservation efforts ensure that saiga populations grow big enough to deal with these catastrophic but often natural events.”

“There is evidence that the 2015 mass die-off, like a few in the past, was related to Pasteurellosis, an infection caused by the bacteria pasteurella multocida and driven by climate anomalies. This bacteria usually lives in the oesophagus of antelope, but because of the temperature/humidity anomaly during the calving time (when females are already physiologically stressed), this bacteria turned virulent and caused haemorrhagic septicaemia. While that is the proximate cause, the ultimate cause remains unknown.”

While the recent growth of the saiga population is good news for biodiversity, farmers might see things differently. Local news sources reported farmers in north-west Kazakhstan suffering losses after herds of the Ural saiga population migrated through their crop fields. 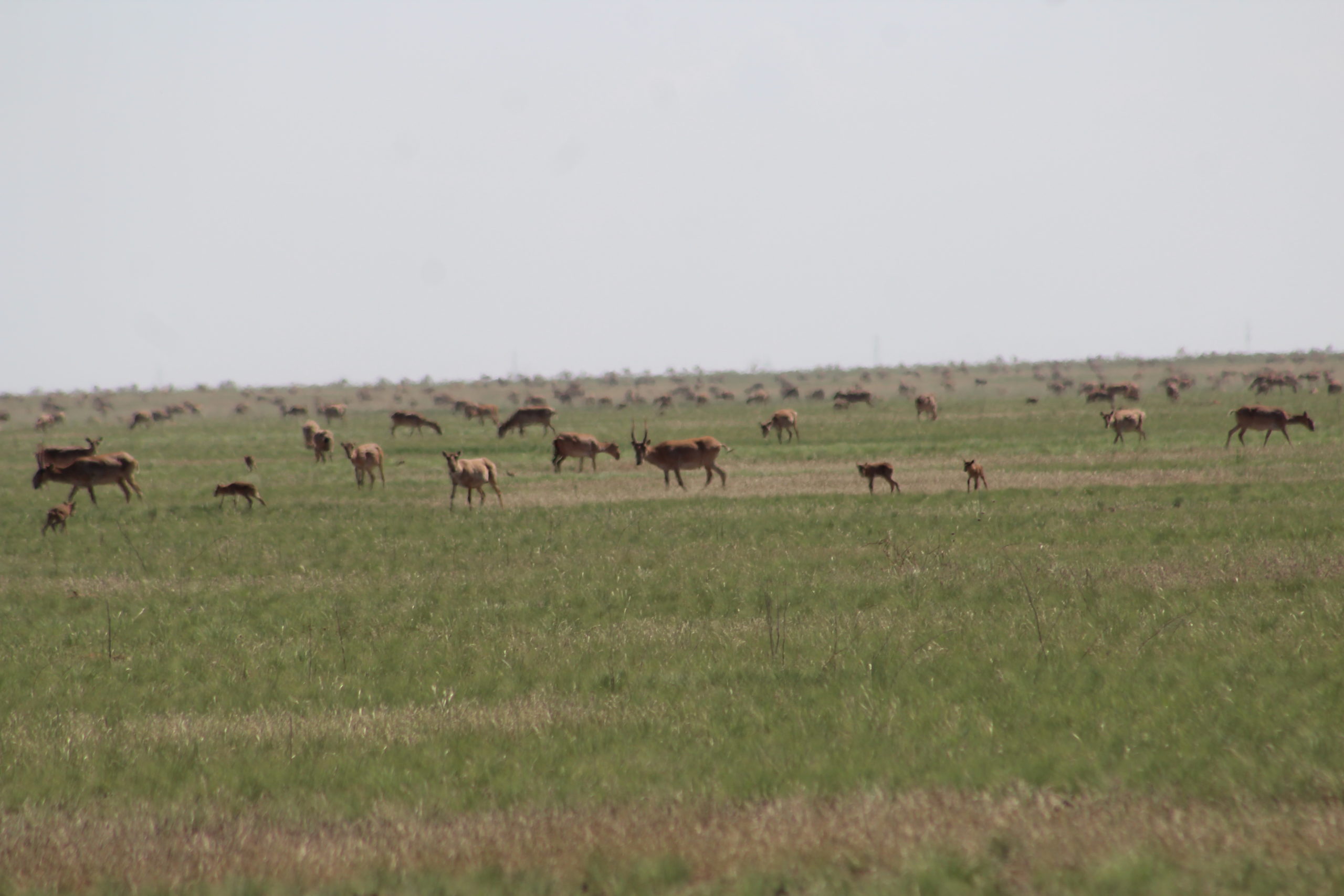 “The government agencies and NGOs, from my knowledge are still gathering baseline data/evidence of this occurrence to then provide evidence-based interventions (if necessary),” said Khanyari. “I think it will be key for various stakeholders to work together towards a land-sharing rather than land-sparing way to conserve saigas. Historically, huge numbers of saiga shared the steppe with huge numbers of livestock, so it can be done.”

He added: “Overgrazing might be a concern as saiga numbers increase, but it is important to contextualise this within the bigger picture. Climate change is impacting these lands in various ways and also livestock numbers are rebounding after the dip following the Soviet break-up.”

The government of Kazakhstan has stepped up its efforts to eradicate poaching by criminal organisations – which claimed the lives of two park rangers in 2019. Last year, the country’s National Security Committee conducted a nationwide operation, seizing over a tonne of saiga horns destined for China, with an estimated value of more than US$14 million. 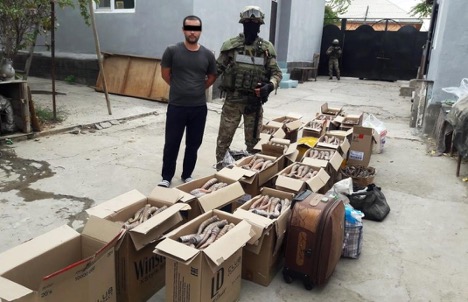 The country’s president Kassym-Jomart Tokayev said: “Poachers keep on hunting saigas, our natural heritage. They must be severely punished in accordance with law.”

Conservationists and scientists say a multi-disciplinary approach is necessary, together with inter-state protection of the endangered species from illegal poaching. There must also be routine monitoring and research, so that countries in the region are better prepared for disease outbreaks. 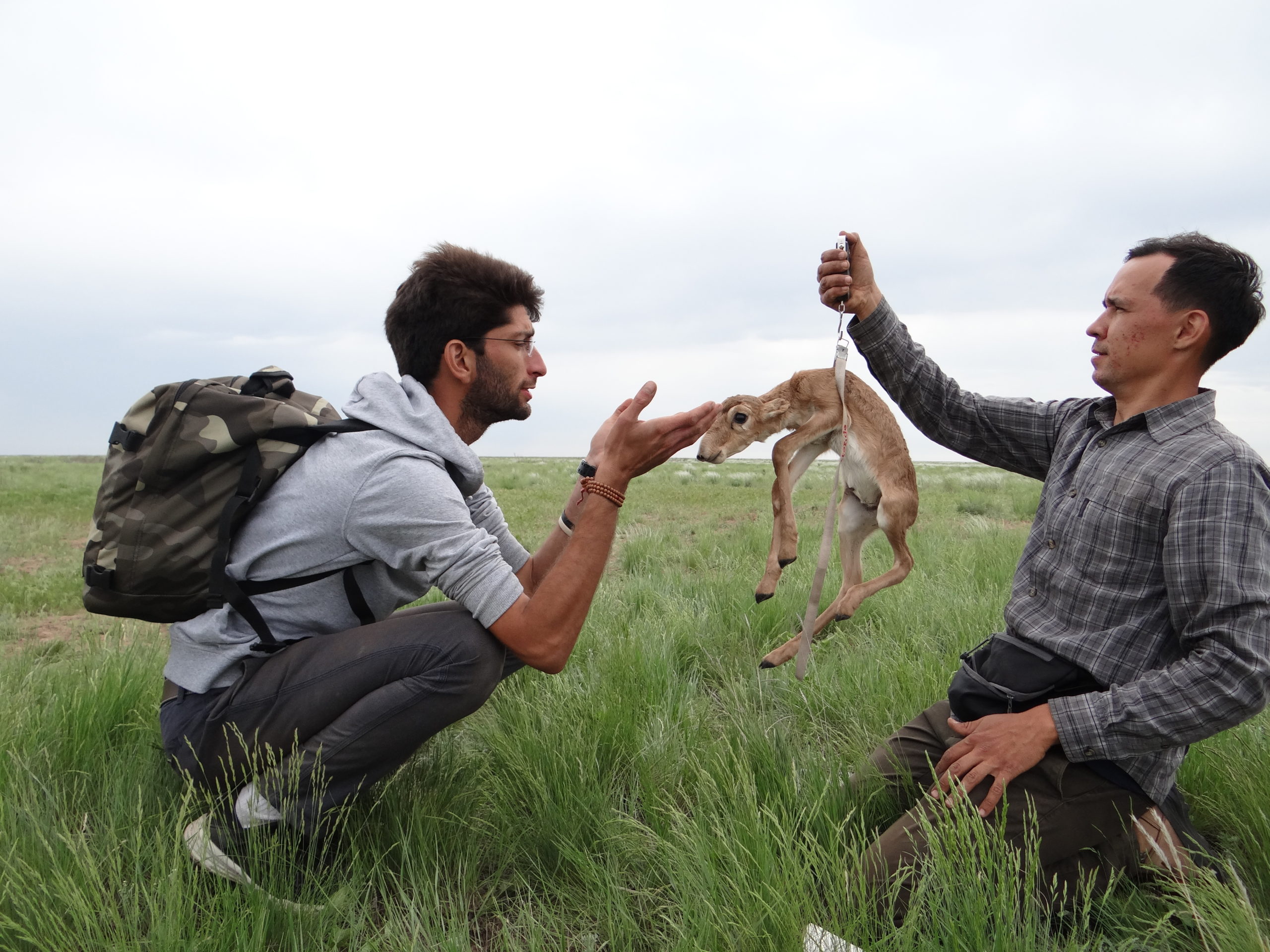 “Saiga are critical for the ecosystem of the region. As the primary consumer, they impact processes such as vegetation composition and nutrient cycling. Without the saiga the steppe ecosystem will likely be negatively affected, which has the potential to affect local water supplies and the climate. Saiga are also food for predators like wolves and even steppe eagles, so play a critical role in the food chain,” said Munib Khanyari.

“Beyond this,” he added, “saiga are extremely important culturally and historically. Saiga have been roaming the Earth since the time of species like mammoths. They are like living fossils.”

This article was first published by our sister site The Third Pole.

How border disputes in the Himalayas are affecting climate research