A lot of money is needed to prevent spiralling biodiversity loss; somewhere between US$598 billion and US$824 billion a year, according to the Nature Conservancy and Paulson Institute. The good news is that around half of that could be met with existing finance, redirected from activities that damage nature to those that enhance it.

The bad news is countries already agreed to do this in 2010, but most failed to even identify what subsidies they were promoting that caused problems, never mind reform them. The value of subsidies that harm biodiversity has been estimated to be five or six times higher than finance for promoting conservation and sustainable use of biodiversity.

The issue is still very much alive. The draft text of the Kunming agreement – the successor to the failed 2010 Aichi targets – includes a target to reform subsidies, and eliminate those that are most harmful to biodiversity so that incentives are positive or at least neutral for biodiversity by 2030. The EU’s 2030 Biodiversity Strategy published last year also supports phasing out subsidies that harm biodiversity.

Several recent major reports have stressed the importance of reforming subsidies. In January, an overview of biodiversity finance by environmental think-tank Global Canopy warned that even with increased investment from the private sector, the biodiversity funding gap would likely not be filled unless harmful subsidies estimated at US$1 trillion were redirected to nature-positive activities.

Subsidies can take many forms, including lowering the cost of production, raising prices producers can set and  lowering prices paid by consumers. They can include direct funds, tax benefits, favourable loan rates and funding for research and development. Incentives can also come from various sources, such as governments, international financial institutions and regional development banks.

These complexities make subsidy values hard to estimate. Dasgupta cites annual global support for energy, agriculture, water and fisheries at more than US$4-6 trillion. While Global Canopy estimates them at $274-542 billion, rising to $670-1,020 billion if including fossil fuel subsidies.

The idea of subsidy reform is receiving a lot more attention through the UN Convention on Biological Diversity in the run up to the Kunming COP15 conference later this year, compared with when the Aichi targets were negotiated a decade ago, notes Andrew Deutz, director of global policy, institutions and conservation finance at The Nature Conservancy.

This trend is fuelled partly by interlinkages with the causes of and solutions to climate change, he believes. Deforestation and agricultural practices account for a quarter of greenhouse gas emissions, but can also provide around a third of the mitigation needed to keep global temperature rise to within 1.5C of pre-industrial levels, he points out.

“Suddenly, nature has become core to the climate debate. It’s now much easier for people to get their heads around dealing with subsidy issues in the biodiversity context, and to understand that the climate, biodiversity and oceans crises all intertwine and need to be solved simultaneously,” he says.

The conservation sector has only woken up to the significance of subsidies for agriculture, forestry and fisheries relatively recently, according to professor John Tobin, an expert on responsible finance and editor of the Global Canopy research. “I don’t think anyone had done the calculations that we and others such as Professor Dasgupta have done recently, so the issue wasn’t fully appreciated because we hadn’t looked at the problem carefully enough,” he said.

Suddenly nature has become core to the climate debate.

However, the complexity and entrenched nature of subsidies make reform challenging. G20 governments agreed to phase out incentives for fossil fuels in 2009, yet the marginal progress that has been made is predicted to be undone by at least US$295 billion committed to fossil fuels in response to the Covid-19 pandemic by G20 governments, according to Energy Policy Tracker.

Meanwhile, members of the World Trade Organization (WTO) have been discussing fishing subsidies since 2001. Governments had agreed in 2015 to eliminate subsidies that support illegal, unreported, and unregulated fishing and prohibit subsidies that contribute to overfishing and overcapacity by 2020, but missed the deadline. The WTO’s new director-general, Ngozi Okonjo-Iweala, is convening a ministerial conference in mid-July that campaigners are hoping will settle the issue.

According to Deutz, part of the problem is that biodiversity in general has been a niche issue within the domain of environment ministries, who are relatively powerless to change the support provided to agriculture, forestry and fisheries sectors by more powerful ministries that govern economic decision-making and planning.

Tobin points out that governments may have had strong political or economic reasons for introducing support to particular sectors in order to curry favour with particular voter blocks. In addition, discussions on subsidies have typically taken place in the realm of trade talks rather than the environment, and governments have therefore seen efforts to change them as interference from foreign governments.

However, there are also equity issues that need to be carefully considered so that reforming support does not have unintended consequences, Deutz says. For example, subsidies often benefit big agricultural firms over small producers because they have a stronger voice in lobbying for, and maintaining, incentives that benefit them. Any reform would need to ensure that the people who lose out are not the people who need extra support, he says. “You need some sophisticated tools to understand the equity impacts of the subsidy reform process,” he says.

Katia Karousakis, biodiversity analyst at the Organisation for Economic Co-operation and Development (OECD), echoes this sentiment. “One of the things that successful reforms have shown is that it’s important to identify who the winners and losers are beforehand. In cases where there might be adverse impacts on vulnerable or poor groups, you need to bring in complementary policies to address those, and make everything very transparent in advance,” she says. 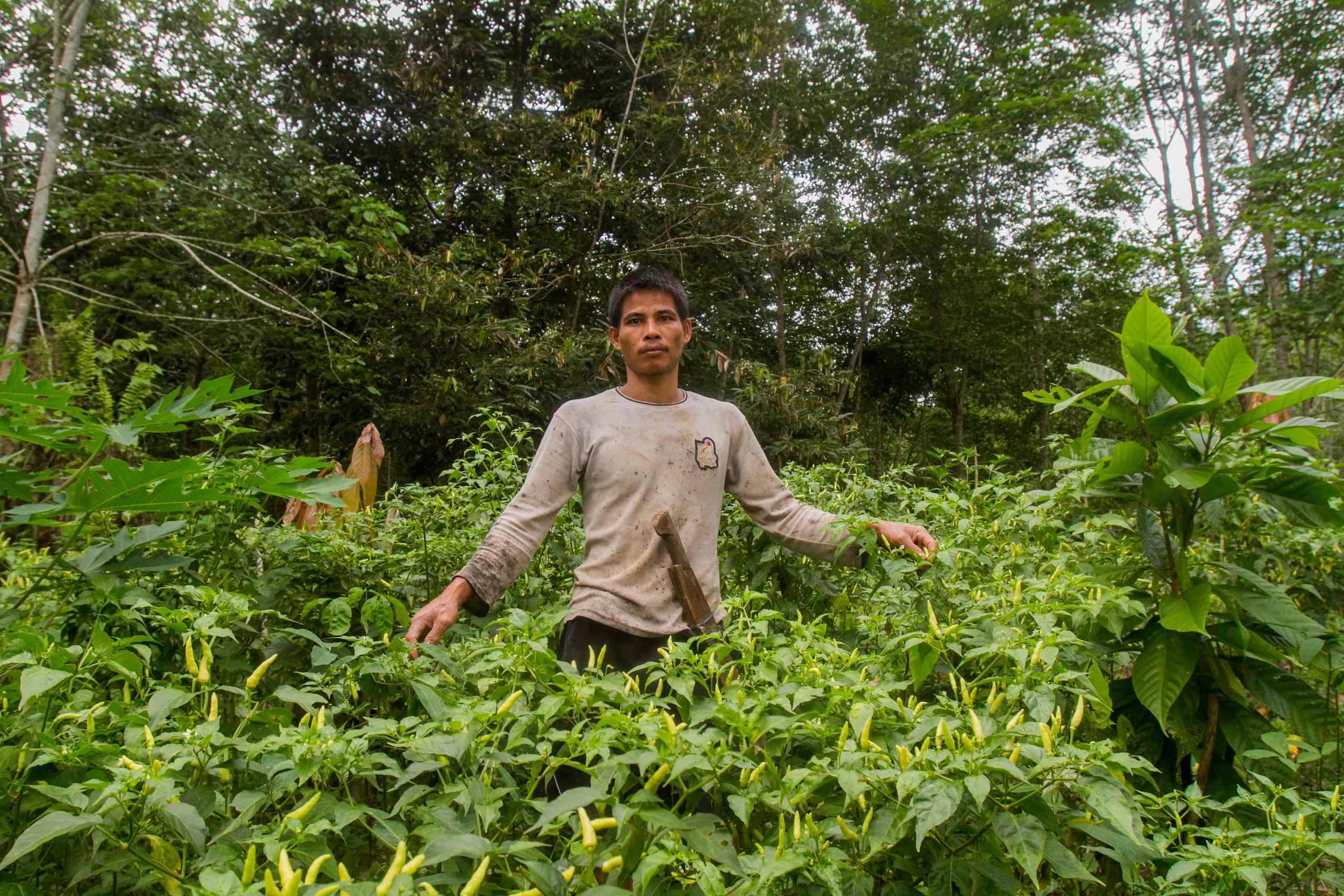 Farmer Lukman Firdaus on his agroforestry farm in Jambi province, Indonesia. Agroforestry – the integration of trees and shrubs into animal and crop farming – is one of many ways to reduce the biodiversity impacts of agriculture (Image: CIFOR, CC BY-NC-ND 2.0)

Karousakis gives the example of Switzerland, which is also cited as a positive case study in the Dasgupta review, and by Global Canopy. Over the past 20 years, the Swiss government has carried out a series of changes to agricultural support in order to better meet policy goals, including for biodiversity.

Direct payments to livestock farmers have been removed, while other payments have been increased to farmers who have changed practices to meet biodiversity targets, for example, by creating areas of high value to wildlife, both flora and fauna. Overall, the farming sector received higher payments after the reforms.

“The agricultural community in the past had one voice, but because the government identified the winners and losers, some of the farmers saw that they stood to gain, so were in favour of the reform,” she explains.

The UN Development Programme (UNDP) is also running the Global Biodiversity Finance Initiative (BIOFIN) to help governments identify positive and negative impacts of their public finance. So far, 36 countries are using its approach, including Kyrgyzstan.

Farming employs 32% of the central Asian country’s population, and contributes 14% of its GDP. Agricultural support totalled US$300 million in 2017, and included subsidies for fertiliser, pesticides and seeds; lower water and electricity tariffs and loan interest rates; and exemptions for income tax and VAT.

A review undertaken with the UNDP BIOFIN revealed damaging outcomes. For example, overuse of agrochemicals reduced soil quality and caused fertiliser to run off into other land and water. Overuse of water depleted resources and caused soil fertility loss, waterlogging and soil erosion. The government is now working to identify new policies that support a transition to more sustainable practices.

Environment ministries are relatively powerless to change the support provided to agriculture, forestry and fisheries sectors

The OECD is developing guidance to help other governments identify and assess domestic support schemes that are harmful to the environment, or biodiversity specifically. It has assessed which countries have already done this – so far, around a dozen countries including Italy, Germany and France – and hopes to publish the guidance ahead of COP15 in Kunming.

Similarly, the OECD runs the Paris Collaborative on Green Budgeting, which helps governments to align national spending and revenue processes with environmental goals, including biodiversity. France, a founding member of the collaborative, has developed a methodology for greening its national budget, and has undertaken an initial assessment of revenues and expenditure.

“The aim is to have a systematic approach improving the alignment of government spending with environmental objectives, both the positive and negative impacts of budgetary and fiscal decisions,” Karousakis says. “France has done the most comprehensive work because so far they’re the only ones that have looked at both positive and negative spending,” she adds.

The EU has assessed its budget to calculate the proportion being spent on biodiversity, and other countries are following suit, including Ireland and Mexico. Karousakis believes governments have started to take the issue more seriously now. “It’s a very good start, though there are 196 parties to the CBD [Convention on Biological Diversity] so there’s still a long way to go,” she says.

COP15 offers a massive opportunity for a comprehensive and measurable framework with which to monitor progress over time, Karousakis says. “I’m very pleased about the recent momentum – more needs to be done, but we seem to be on the right path.”

Mammoth ivory: curbs on the Siberian trade may be good news for elephants

The China fir and the Plantation Age

Review: The Buddha’s Footprint: An environmental history of Asia