Hong Kong is an international hub for the illegal trade in wild species, which is estimated to be worth up to US$23 billion a year globally. It is also a major buyer of these species, which include protected animals and plants, as well as their parts and products.

According to Trading in Extinction, a 2018 report by the ADM Capital Foundation, the total value of illegally traded wild species seized in Hong Kong between 2013 and 2017 stood at HK$560 million (US$72 million). In terms of illegal trade, only drug trafficking is larger. As much as one-fifth of the world’s elephant ivory seizures are made in the city, and the number of pangolin carcasses and scales seized represents the capture of up to four pangolins every hour.

In recent years, this trade has expanded and become more complex – from 2007 to 2016, the number of illegally traded individual species grew by 57%. This has created a knowledge gap in Hong Kong’s legal sector, with prosecutors and judges failing to keep up with the specialised knowledge that the prosecution of wildlife crime requires.

Compounding the problem is the fact that wildlife crime is not classified as a “serious crime” under Hong Kong law, limiting the powers of prosecutors. This results in lenient sentences that fail to act as deterrents. 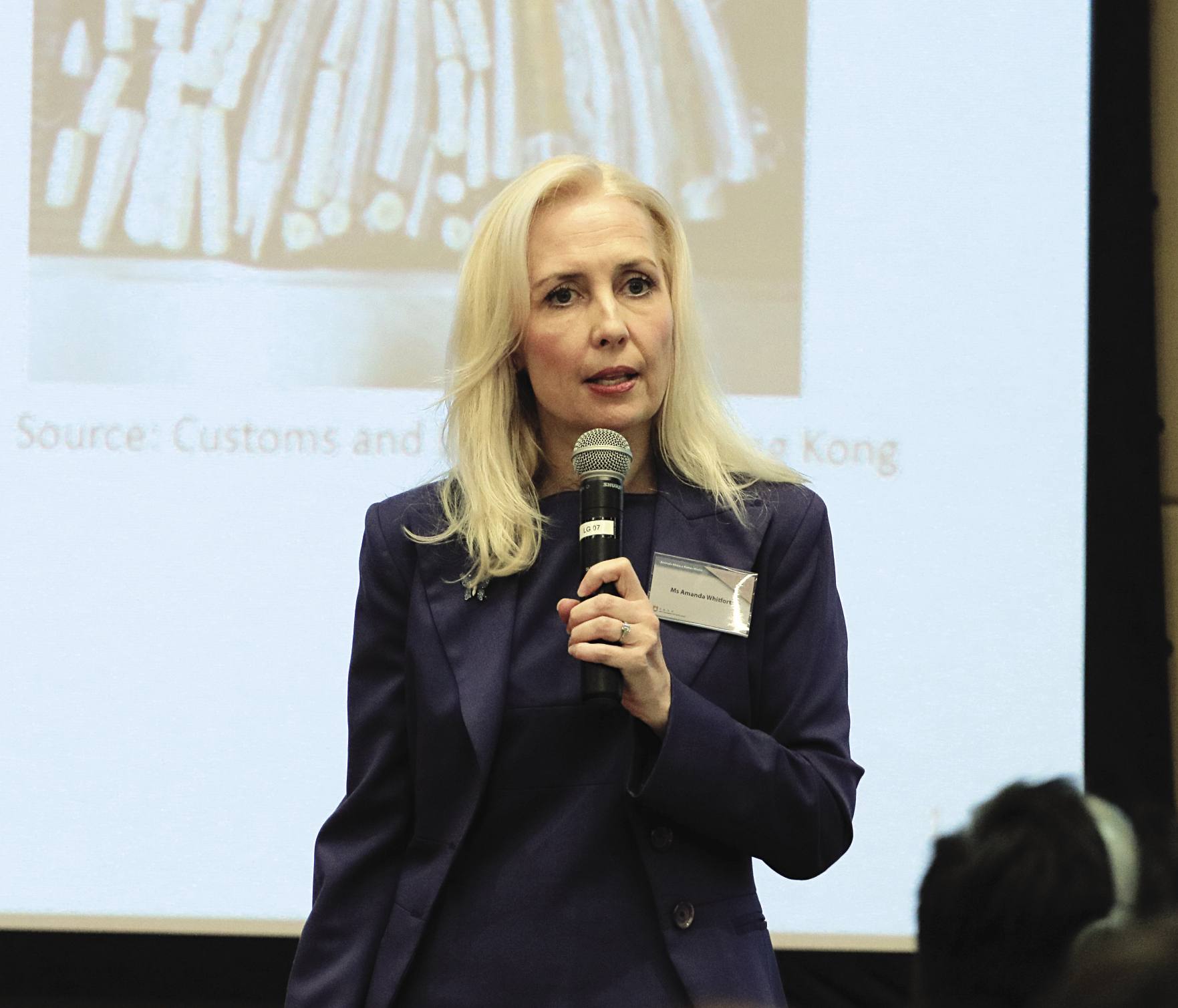 Amanda Whitfort is a specialist in criminal and environmental law (Image: University of Hong Kong)

Amanda Whitfort, associate professor in the Faculty of Law at Hong Kong University and a specialist in criminal and environmental law, is working on bridging this knowledge gap to enable the Hong Kong judiciary to make better sentencing decisions. Whitfort is also a barrister and prosecutes for Hong Kong’s Department of Justice.

Working together with scientists and experts from Hong Kong University and the Kadoorie Farm and Botanic Garden, one of the things Whitfort has done is introduce to Hong Kong courts victim impact statements for trafficked species.

A victim impact statement gives the victim of a crime the chance to make a judge aware of how they’ve been affected. Animals and plants are obviously unable to speak in court, and wildlife crime is often seen by legal professionals as “victimless”.

Whitfort’s victim statements seek to change this by speaking on behalf of the trafficked species. They explain not only the suffering an animal endures when caught and shipped, but also the impact on the species as a whole, detailing for example the significance of a particular seizure in relation to the total population of a species left in the wild.

These statements are already improving the quality of sentencing in Hong Kong, and Whitfort is now working on extending the practice elsewhere in Asia.

China Dialogue: Where does the idea of introducing species victim impact statements to Hong Kong come from?

Amanda Whitfort: In 2016, I discovered that Scottish prosecutors were handing out victim impact statements about the environment to judges through the [UK’s] Crown Prosecution Service.

The judges love them, because they then immediately understand the environmental impact in a way they could not have researched easily by themselves. And their sentences are, therefore, more appropriate.

One of the things that I have constantly noticed [in Hong Kong] was that the judiciary don’t get the information they need in order to make the correct sentencing decisions. Judges do not necessarily get told that the case involves the last 40 [individuals] of that species!

If you take certain animals out of an ecosystem, it impacts on the animals left behind and the biodiversity that we are all part of.

I thought, how could we fix this in Hong Kong? I can figure out what kind of evidence is acceptable to a court, in a statement, but I need an ecologist, I need a partner to advise on the science. So I went to Dr Gary Ades from the Kadoorie Botanical Farm and Garden. We got a grant from Hong Kong University (HKU) and hired an ecologist from the School of Biological Sciences. Gary figured out what he thought were the most likely traded species to go before the courts, our ecologist did the research, and I developed the science into impact statements that you can actually hand up to a court.

What information is included in these statements?

They explain where the species are listed in CITES (the Convention on International Trade in Endangered Species); their IUCN (International Union for Conservation of Nature) red list category; the ecosystem impact from removal of the species… [and] how removal affects the other species left behind; population depletion; food chain effects; the impact of crime on poor rural communities; monetary value on the black market; [and] relevant sentencing decisions from other jurisdictions. Dr Caroline Dingle from the HKU Conservation Forensics Lab has also joined the project and is adding forensics expertise to our data.

Now we have 85 of these statements, and the AFCD (Agriculture Fisheries and Conservation Department) and the Department of Justice are using them when they present cases at court.

Which species do these 85 statements cover?

We’ve got the megafauna, obviously. We also have many of the smaller species that people don’t necessarily know about. We have the ploughshare tortoise, the Hong Kong golden coin tortoise, the humphead wrasse… We also have species of coral, incense trees, the helmeted hornbill… We have animals that are coming in for collectors, but also the high-value species for traditional Chinese medicine. We’ve got all the species of pangolin.

Each of our statements has a list of experts that can back up absolutely everything we claim. Through Kadoorie and the school of Biological Sciences at HKU we have been able to find a lot of professionals who are prepared to give their time to help.

Many people may think: “It’s just some tortoises…”

I think it’s quite naive to believe that it’s some kind of niche, small problem. It’s not just a matter of: “Oh well, it’s just a tortoise!”

There is credible evidence that the illegal wildlife trade is related to organised crime and that it involves criminals [who] are also involved in human trafficking, arms trafficking and other very serious offences. And a lot of the animals that are coming through Hong Kong have been smuggled out of Africa.

But then you’ve also got impacts on the ecosystem. This is where I was concerned that the legal world was not being given enough information. If you take certain animals out of an ecosystem, it impacts on the animals left behind and the biodiversity that we are all part of.

I really wanted to make it clear that these animals can’t just be replaced. I mean, things that are stolen can be replaced, but endangered animals… Once they’re gone, they’re gone!

Under Hong Kong’s legal system, wildlife crime is not considered a “serious crime”. How does this affect prosecuting and sentencing?

The really weak point is that, in Hong Kong, we do not have wildlife crime listed in the Organized and Serious Crime Ordinance. So wildlife offences are prosecuted in a way that does not allow for the prosecutors or the judges to treat the offences with the seriousness that I think they should be treating them with.

Making other animals extinct for the sake of continuing harmful traditions can’t possibly be an acceptable moral position to take.

For example, a prosecutor is not allowed to use the Organised and Serious Crime Ordinance’s investigative powers to require a suspect to provide information. A suspect can be interviewed, but he can rely on his right [to remain] silent. If it were an organised and serious crime offence, then the prosecutors would be able to get a court order to demand to see business records to find out who was behind the smuggling. They could then use the method recommended by Interpol for combatting this type of crime: following the money to determine who is involved internationally. In Hong Kong, we have never had a prosecution that goes beyond the mule.

So, wildlife crime in Hong Kong has been under-punished, in your opinion?

Oh yes, it has been horrendously under-punished!

Is there resistance in Hong Kong to the tightening of the laws regulating wildlife trade?

Of course. There is significant money being made from it, so there is huge resistance.

Traders have resisted on the basis that some aspects of it are traditional. We saw that with the ivory trade. The traders came to Hong Kong’s Legislative Council (LEGCO) and argued against shutting down the ivory trade on two bases: that it would put many people out of work, but also that carving was a traditional craft. If you shut down the ivory trade, then you lose an essential part of Chinese history.

What we must do is sit down and think about what our obligations now are, as the most powerful of species. Making other animals extinct for the sake of continuing harmful traditions, or satisfying a taste for luxury foods or a desire to own rare pets can’t possibly be an acceptable moral position to take. We need to curb our behaviour and face up to the fact that our current practices are unsustainable.

We are talking to prosecutors and judges in Mainland China, Malaysia and Vietnam. Because this is science, it is transferable! It’s just a matter of figuring out how the [statements] can be used to the best advantage within a different legal system.