Oil palms today are ubiquitous across Southeast Asia. How did this crop from West and Central Africa come to dominate landscapes in this region and others around the world?

My recent research explores the role of oil palm science in colonial expansion, by tracing moments that oil palms surface in the records held at Kew Gardens in London. From the 18th century, Kew was a hub for circulating plant specimens between colonial botanic gardens around the world.

Processes of naming, sorting, marketing, monitoring and development that took place through the network of Kew and other botanic gardens were central in expropriating the oil palm to Southeast Asia.

These modes of operation, designed by colonial botanists and bureaucrats, helped expand the British empire and shape the plantation industry as it is today. In particular, notions of “care” and “carefulness” were circulated widely.

The earliest contact Europeans would have had with the oil palm was likely as a result of the Atlantic slave trade. By the beginning of the 20th century, British industries had found that it was a good substitute for tallow from whales and other animals: it became increasingly used in food, soaps, candles, tinplating, and as an industrial and railway lubricant.

This became possible in part because of Kew and the British government’s practice of sending out botanists on voyages to bring back exotic plants. As these botanists documented all aspects of the oil palm and sent these back to Kew, the practice of travelling botany became an important part of service to empire.

One such botanist was Gustav Mann, a Kew gardener who wrote from the mouth of the River Niger in 1860, informing the director that he had identified oil palms. Mann had been sent there on a recommendation by the director of Kew to Lord John Russell, then the prime minster of Britain, in the hope he would become a part of what became known as the Niger Expedition. Packaging his seeds carefully, Mann sent them back to Kew. 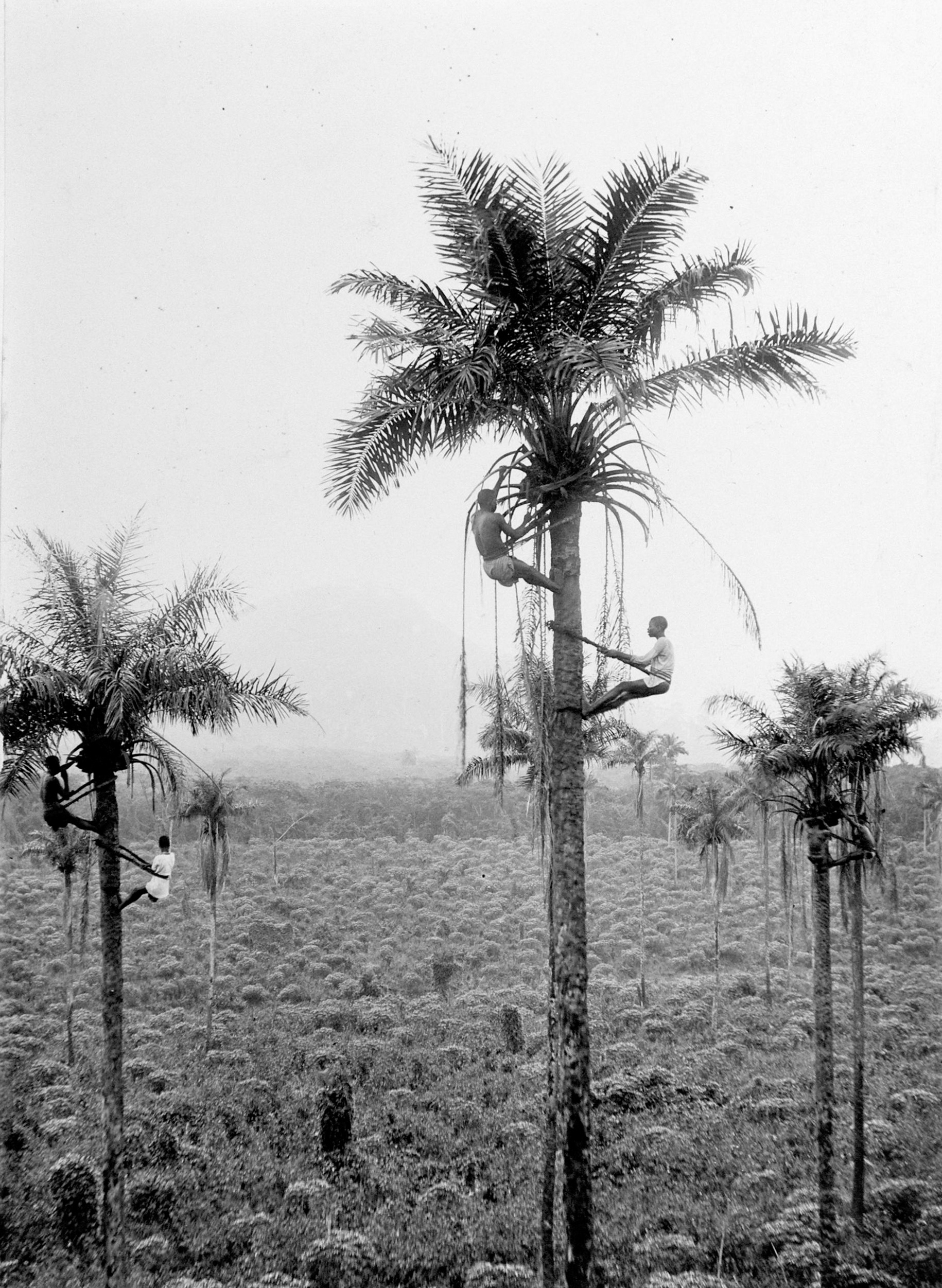 In West Africa, oil palms are traditionally left to grow semi-wild around villages, sometimes requiring harvesters to climb high up to cut the fruit. Sent on an expedition to the region in the mid-1800s, colonial botanist Gustav Mann was dismissive of these local methods, calling them inefficient and unproductive. (Image © The National Archive)

In a letter sent the same year from Bioko (then Fernando Po), Mann also described the methods of oil palm cultivation he had observed on the island, calling them inefficient, unproductive and in need of improvement. Such observations reflect the aims of the expedition that Russell had intended Mann to join. Russell had hoped to find untapped potential for a “legitimate trade” to replace slavery.

While palm oil was later marketed as taking on that role, in fact the twinned trades in enslaved people and palm oil continued to expand alongside one another. In some cases, palm oil became a foil for slavery. The rising demand for palm oil in Europe led to tensions in the Niger Delta, which in turn were used to justify British appeals for colonial control – again framed in terms of care and improvement – in the region until Nigerian independence in 1960.

As palm oil became increasingly central to colonisation efforts, scientists and bureaucrats concerned themselves with finding a variety of oil palm that could produce higher yields, and thus generate higher revenues for the empire. Diverse African peoples had in fact long known about the yields of different varieties. Yet the local Efik and Igbo naming practices for different varieties were considered a mere frustration by colonial scientists, as they struggled to systematise and name varieties according to their own taxonomic systems.

The British assistant conservator of forests for Nigeria expressed this arrogance, concluding in a report for Kew that “the names given by the native to palm fruits are most unreliable”. Instead, he deemed that “careful” scientific work was needed to establish what the best variety was, so that (European) knowledge about the palm could become translatable across European colonies.

The oil palm can grow semi-wild, thriving in areas of human disturbance, yet without human control. British bureaucrats, botanists and entrepreneurs were obsessed with how they might instead plant oil palms in plantation form, reflecting colonial enterprises with other forms of cash crop. Much-loved local palms were deemed “uncared for”, and the perceived neatness and order of the plantation became seen as a moral imperative that “natives” must be taught.

As this perceived carefulness became the valued scientific skill of the time, colonial subjects were again branded as uncareful and thus in need of moral improvement, even though Europeans were themselves relying on African knowledge and labour.

One British entrepreneur and supposed philanthropist, Lord Leverhulme, used his squeaky-clean reputation in Britain as a soap magnate to gain concessions in the Belgian Congo. There, he employed military coercion and torture on labourers. Historian Jules Marchal has written about Leverhulme’s empire, characterised by brutal regimes of forced labour, contrasting with narratives in Europe about the “uplift and civilisation that Europeans were bringing to the benighted natives”. 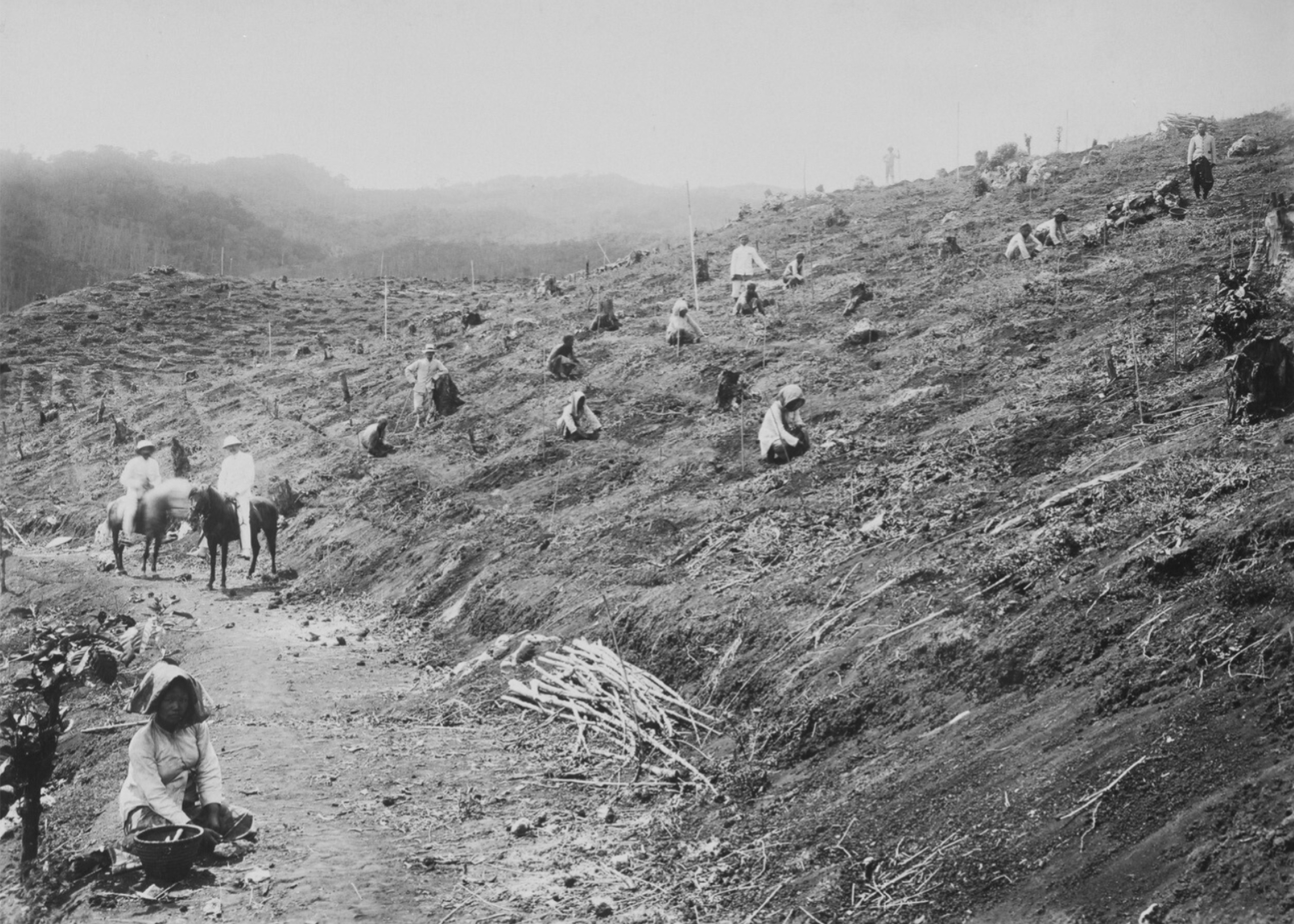 “Careful natives” plant rubber trees and coffee bushes on a newly cleared plantation site on the island of Java in the early 1900s. The area was then under colonial rule as part of the Dutch East Indies. The region’s first oil palm plantation was set up in 1911 and made use of structures already established by other commodity crops. (Image: N.V. Photografisch Atelier Kurkdjian (Fotostudio) / Nationaal Museum van Wereldculturen, CC0)

Eventually, botanists at botanic gardens in Southeast Asia became interested in the question of whether they too might grow this lucrative crop. Again, they expressed the need for “care”: careful selection of the right seeds, and using only the most “careful natives” as labourers.

Part of the success of oil palm plantations in Southeast Asia was due to how the crop took over existing infrastructures, including legal mechanisms for land grabbing and systems of forced labour that were already established for rubber. Palm oil historian Jonathan Robins surmises that “contrasting the Southeast Asian oil palm story with the African experience makes it clear… the key was power over people and land.”

Care and carefulness made oil palm a transposable object while masking the violent undersides of colonial oppression. Care was used to organise, discipline and classify human and plant bodies, creating what theorist Linda Tuhiwai Smith has called an “attitude” of ownership.

Today, it is palm oil corporations that hold the power and ownership. Described by anthropologists Tania Murray Li and Pujo Semedi as “the new occupiers”, corporate groups often use narratives of care in strikingly similar ways to the colonial governments that preceded them. 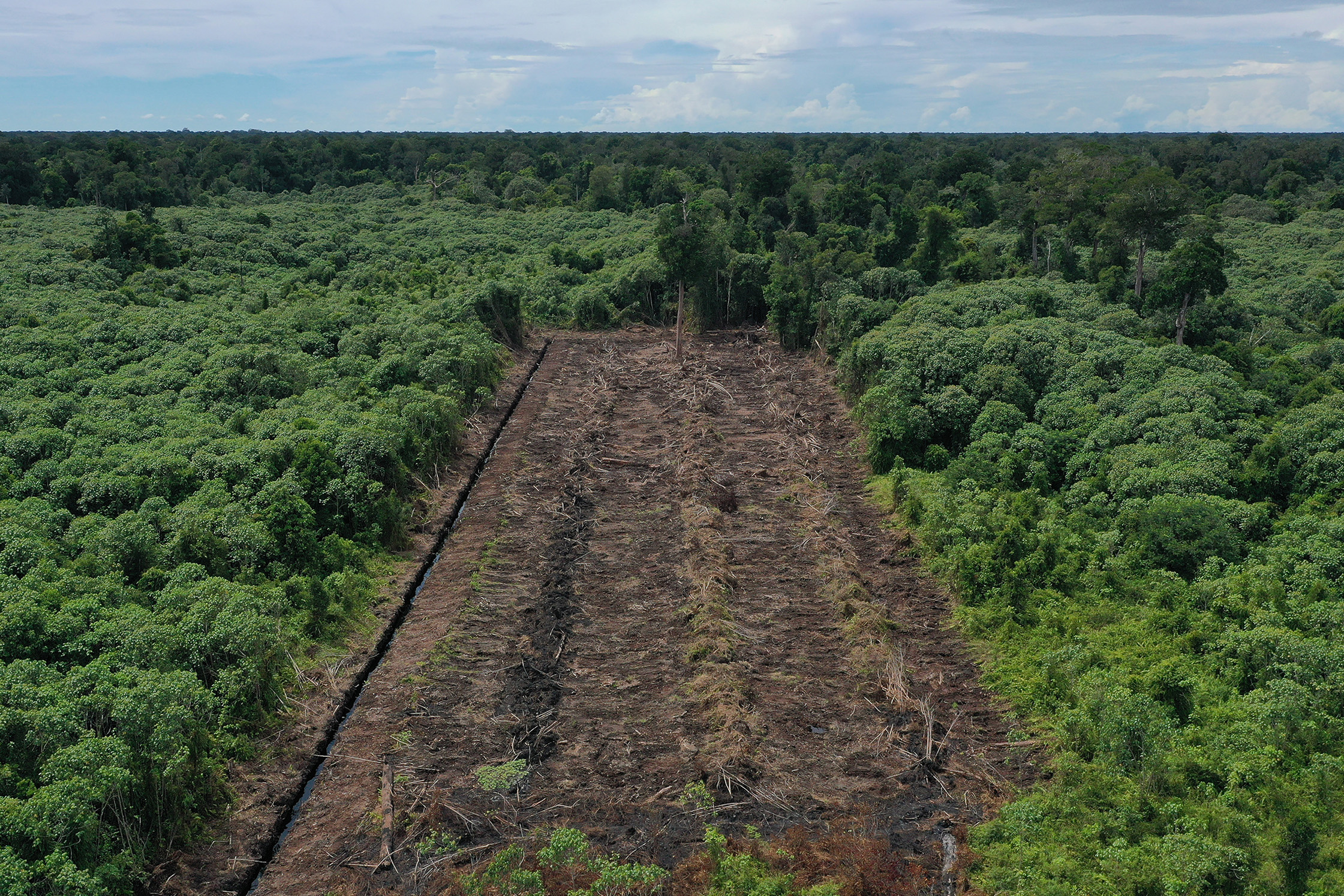 Illegal deforestation for oil palm in the Rawa Singkil Wildlife Reserve, part of the Leuser ecosystem on the Indonesian island of Sumatra. Rainforest Action Network has accused Unilever and other consumer goods manufacturers of using palm oil produced by the company that caused this destruction, in violation of no-deforestation commitments. (Image: Rainforest Action Network)

Unilever – the company founded in 1911 by Lord Leverhulme – argue that they demonstrate care in committing to no deforestation and no exploitation with palm oil policies. Yet, alongside being the largest buyer of palm oil in the world (using over 900,000 metric tonnes in 2021), having one of the highest paid boards in the UK, and a brand value of about US$4 billion, Unilever is often linked to conflict palm oil.

In 2021, Rainforest Action Network (RAN) accused Unilever of sourcing palm oil from a supplier that violated no deforestation commitments and customary land rights in Indonesia’s Leuser Ecosystem – one of the most important forests left on the planet. Unilever claims it has no direct sourcing relationship with the controversial plantation, but it continues to perform “care” by monitoring progress of the case. Fresh allegations have recently emerged as RAN investigators have connected Unilever and other consumer goods manufacturers to plantations operating illegally inside a protected wildlife reserve in the Leuser ecosystem on Sumatra.

Looking for certification from auditing bodies like the Roundtable on Sustainable Palm Oil is thought to be the way consumers and producers can show “care” for sustainability and human rights. However, as geographer Izabela Delabre has shown, “participation in social impact assessment is found to be, at most, consultative and top-down, and risks the further disempowerment of affected peoples”.

This conveys the challenge of producing sustainable palm oil in the context of social justice and equitability. It demands that greater attention be paid to the kinds of care that the world gives to oil palm. A more useful, more equitable care with regards to oil palm should always focus on the question of who actually benefits from our care and why.

Red gold: a history of palm oil in West Africa