Ian Johnson’s latest book The Souls of China: The Return of Religion After Mao has rekindled a conversation that started almost a century ago: what’s the spiritual status of the Chinese people? 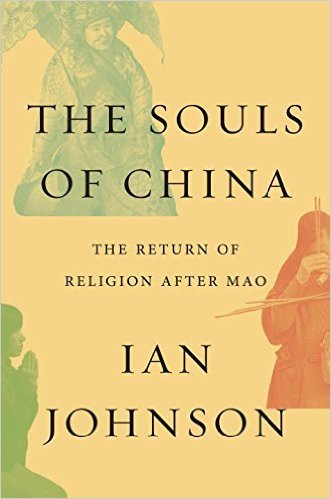 A hundred years ago, China’s humiliating defeat on the world stage kicked off a painful round of soul-searching within the country’s intellectual elites, many of whom blamed it on the nation’s backward state of mind. Since then, campaigns, movements and revolutions have been waged to reform and reshape the soul of the Chinese people; some have advocated the complete abolishment of traditional Chinese beliefs while others have insisted on their reinforcement.

Johnson’s book documents a new phase in this history of self-examination. By following various Chinese groups, including pilgrims in Beijing, Daoists in Shanxi and Christians in Chengdu, he depicts “a great awakening of faith that is shaping the soul of the world’s newest superpower”, which many outside China are either unaware of or can’t fully understand.

On a sunny afternoon in downtown Beijing, we talked to Johnson about his book, and particularly about how this new awakening in Chinese society could form a foundation of environmental awareness in China.

China Dialogue (CD): You’ve followed these faith communities in China for years. What’s different about them compared to other Chinese groups you interact with?

Ian Johnson (IJ): These are people who are looking for community and some kind of togetherness in society. And people of course find answers in different ways but there is a significant number of them who find answers in faith groups such as pilgrimage associations (香会).

The pilgrimage groups are like mildly dysfunctional families [laughs]. There is a lot of shouting and yelling, but there is always mutual respect, and, at the end of the day, a lot of comradery. Members of pilgrimage groups are often working class native residents. The churches are a bit more formal. As people who go to church are from a higher socio-economic class, they tend to be a bit more uptight.

CD: Through this “spiritual revival”, what are some of the values being emphasised?

IJ: Again, community is the key point. People feel that they’ve lost this sense of community. When they live in villages, everybody is related to each other. There are clear ways of dealing with others. Through urbanisation people come to big cities, or even much smaller cities and county seats, where they don’t know anybody including their neighbours.

Even people who always live in the cities see their communities essentially blown up through urban redevelopment. People who once lived in one alleyway are now living all around the city. So this is part of the reason that faith has some attraction. It reminds me of the great awakening in the United States in the 19th century which was also a period of urbanisation and economic change. People looked for answers in faith.

Of course, not everyone finds an answer in religion. For issues like tainted milk powder or pollution, people may attribute them to the lack of laws, rules or a free press. But a strong moral component is also present in such discussions. There is a belief that if people do not have a sense of right and wrong then all these things are useless. So lots of people start to think of it as spiritual, as a lack of minimum moral standards (底线), which I think is often mistranslated in English as “bottom line”. These are things you won’t do to get ahead. And it is what a lot of people feel is missing in China.

CD: In your book you feature places like Miaofengshan, where pilgrims visit every year to pay tribute to the Daoist deity Our Lady of the Azure Clouds. When Western readers think of a centre of worship they think of places like Mecca or Jerusalem. What’s unique about Chinese pilgrimage sites?

In Daoism, a temple is called a guan (观) which essentially means observatory, where you look at the stars and observe heaven. There is no division between the physical and the spiritual world. That’s probably why Chinese religions place a big emphasis on physical cultivation. It’s somewhat similar with Indian traditions such as Yoga, which started also as a purely spiritual practice. You have the same thing in China with different traditions often known as Qigong which is now making a comeback.

CD: Does this say anything about the relationship between man and nature in Chinese culture?

IJ: On the more abstract level there is this idea that the body is a microcosm of the universe. You can recreate the universe in your body through different cultivation techniques. When Daoists meditate in a cave they talk about going back to the womb of the earth, trying to resync with the earth on some symbolic level. On the other hand I think it’s a mistake to translate the traditional Daoist concept of ziran (自然, nature) in a modern ecological way. It’s more of an idea that you should be part of the cosmos (顺其自然).

Concretely there are moves by Daosim to position itself as a green religion. But in my view it seems to be an effort to rebrand itself because people have a hard time understanding what Daosim is. The so-called ‘world religions’ like Islam, Christianity and Buddhism, all have clear stories. Shakyamuni was a prince. He went outside and saw the world suffering. Then he discovered the solution to suffering was to end desire.

Daoism is more of a folk religion which doesn’t really have a clear story, even though it is inside so much of Chinese culture, from Tai Chi to Fengshui. Marketing Daoism proves to be difficult. For historical reasons, it was also socially marginalised by the Manchurian rulers of the Qing Dynasty who were Buddhists.

The result is that even today the educational level of Daoist priests tends to be low. Almost nobody has a university degree. Buddhist temples would have monks with doctoral degrees who are much more able to tell stories and convert people. So Daoism is faced with a crisis and turns to ecology as a re-marketing opportunity. I don’t mean it’s disingenuous or that it’s fake. But whether it will succeed or not is debatable.

CD: Do you think Chinese religions have the potential of forming the foundation of a new environmental awareness and to contribute to the global conversation about conservation?

IJ: There is potential in the sense that most of the temples are in the countryside and in mountainous areas. They used to have large land holdings. And some of them present themselves as stewards of these areas. I know some Daoist temples around Maoshan outside of Nanjing have organic tea and organic herbal products. The challenge for them is again the educational level of the priests who have difficulty marketing themselves successfully to the better educated urban elites. They even have trouble writing the promotional materials. Nowadays there are local governments that assist Daoist temples in marketing and attempts to elevate the level of sophistication of Daoism in general.

I think overall, Chinese are thinking about the same issues as other people around the world. These ideas that societies are not organised fairly, that there is a lack of justice and transparency which led to great political upheavals in the West concern Chinese society as well. If there is one idea that unites all the faith groups I’ve followed, it is the idea of justice, and of “tian” or heaven. I think that’s a very strongly Chinese idea that society should be just. And justice is not something given by a party or a political campaign but it is divinely given. In Miaofengshan, these pilgrimage groups all perform stories of righteousness as part of their rituals.

The spiritual revival shows that Chinese people are participating in this global conversation. And it would be interesting to see if China through Daosim or other religions could contribute something unique.

Ecological wisdom of the ages

Religion and the environment in China