In his 1982 novel A Wild Sheep Chase (《寻羊冒险记》), Haruki Murakami takes his readers on the hunt for a mythological beast, a mutant sheep with a faint star-shaped birthmark on its back.

Set in the 1930s, the sheep emerges from centuries of hibernation as Japan aggressively expands its empire into northeast China in search of the perfect human host to carry out its own agenda for world domination. The sheep first possesses the mind of a Japanese scientist on the Mongolian border, who is setting up a livestock breeding programme in Manchukuo, the Japanese client state founded in 1932. A year later, the sheep jumps host from this agricultural expert to a war criminal, who goes on to become a right-wing mob boss in present-day Tokyo.

For Murakami, the sheep represents the underlying malevolent force that links the Japanese occupation of China (1931-1945) to the right-wing resurgence in Japan’s postwar society. Yet the sheep also signifies the biological legacy of imperialism still present in China’s Inner Mongolia Autonomous Region today, one with surprising and long lasting environmental consequences.

In the early twentieth century, dreams of sheep did in fact possess the minds of Japanese scientists in eastern Inner Mongolia, then a part of Manchukuo. These agricultural experts claimed that environmental conditions on the steppe had deteriorated, requiring imperial intervention to revitalise the land, its people and animals. They sought to create new hybrid species of sheep with finer wool, whose profitable fleece would transform what they saw as a declining nomadic borderland into a sedentary, productive part of the Japanese empire.

As Japan extended its informal empire in northeast China along the South Manchuria Railroad in 1905, it encountered pastoral nomads and their rangelands in eastern Inner Mongolia for the first time. Colonial authorities, echoing earlier descriptions by Chinese administrators, saw the steppe as a wasteland populated with a “dying race” of Mongol herders. Furthermore, Japanese reports blamed pastoral nomads for causing land degradation through overgrazing.

Alongside this “deterioration of the steppe,” Japanese researchers believed that the native livestock of Inner Mongolia also languished. Agricultural handbooks of the 1920s and 30s described Mongolian sheep, cattle, and horses as “undersized” and “degenerated.” As a metaphor, livestock reflected human hierarchies of the empire: for Japanese experts, the decline of native livestock reflected the trajectory of the “dying race” of nomads.

This narrative legitimised Japanese interventions to “revitalise” the Mongolian territories in the name of scientific improvement. The desire to extract natural resources– not environmental conservation – ultimately drove Japanese programmes in pastoral experimentation. 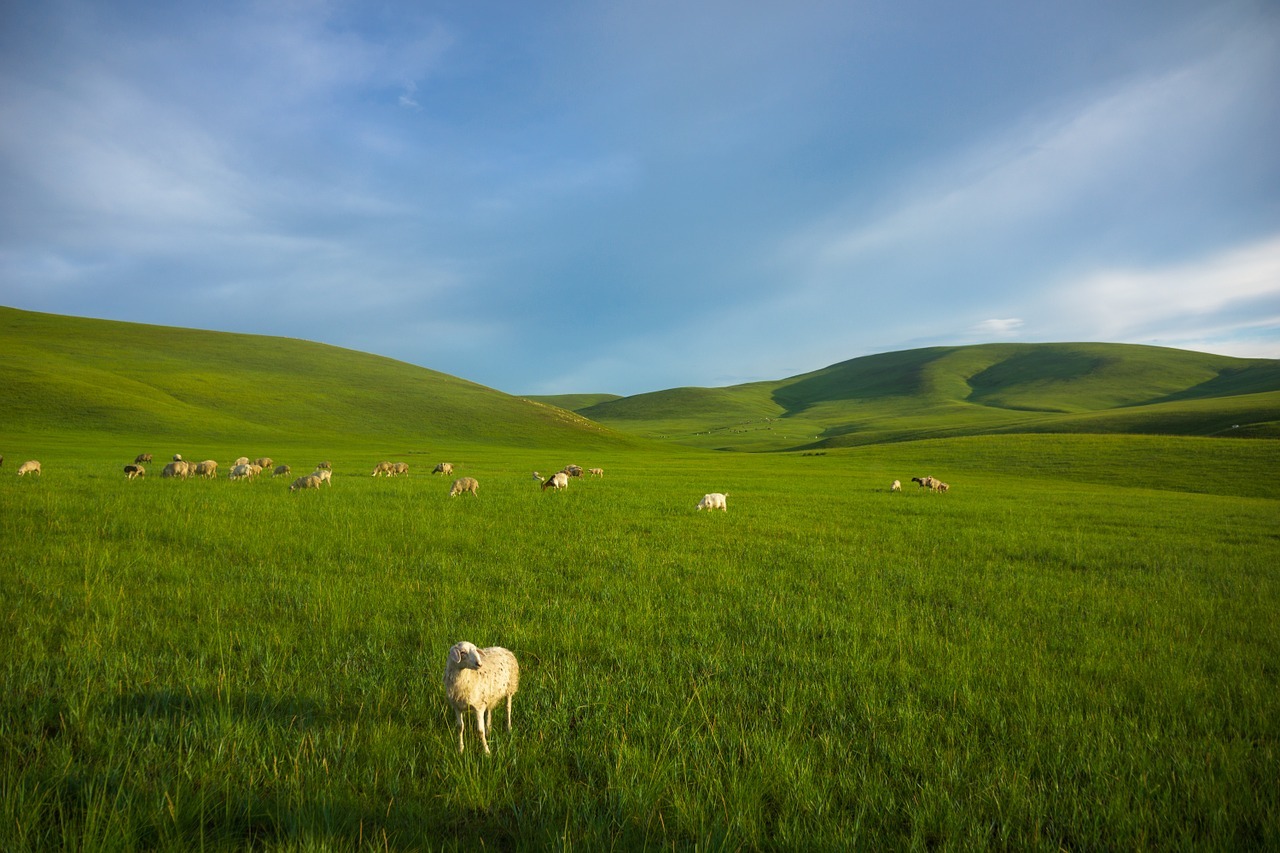 Japanese scientists introduced Merino sheep and alfalfa seeds in an attempt to recreate the agricultural landscapes of Australia and North America (Image: robinxiawen)

Hybrid sheep in the Alfalfa Empire

Experimental farm stations founded by the South Manchuria Railroad Company led the charge in rationalising the livestock industry in eastern Inner Mongolia. People at these research centres studied potential agricultural improvements and headed training programmes for local communities. These stations proliferated throughout China in the early twentieth century but it was the Japanese-run farm stations that pressured pastoral nomads to settle in sedentary ranches under the scientific principles of stock-farming. In particular, the South Manchuria Railroad Company’s Gongzhuling (公主岭) farm station, built in 1913 on the former lands of the Khorchin (科尔沁) Mongols, introduced Merino sheep and alfalfa seeds in an attempt to emulate the idealised frontier landscapes of Australia and North America.

At Gongzhuling, Japanese specialists designed a new hybrid sheep for their empire. They increased the physical size and productive capacity by breeding the local fat-tailed sheep with imported Merinos and other breeds from Australia, New Zealand and the United States. With each generation these hybrids grew taller and heavier. The hope was that, like the local sheep, they would be able to withstand the cold winters and yet also grow a soft fleece.

The coats of the new hybrid sheep were three to six times finer than the original Mongolian variety, which allowed Japan to sever its trade dependency on wool from abroad. Japanese breeders distributed three thousand such sheep from 1924 to 1936 to Mongol herders, and then hundreds more through 1945.

As Japan’s war with China intensified the military demand for wool, the breeding of hybrid sheep expanded throughout the Mongolian territories. Under its 1936 Five Year Plan, the Manchukuo administration projected increasing the number of sheep from one to ten million within eighteen years. However, Mongol herders quickly discovered the new hybrid sheep had wool too fine to tolerate cold weather and did not know how to scratch through the snow to feed on grass. Caretakers had to house animals during the winter and hand-feed them dried fodder from storage, neither of which seemed like viable options for pastoral nomads.

To solve the problem of food supply for hybrid sheep, Japanese agronomists at Gongzhuling introduced alfalfa to the steppe. They heralded this legume as a “green fertiliser”, the key to a self-sufficient, sustainable and sedentary future. This legume could replenish nitrogen in the soil and reverse land degradation thus enhancing the quality of the steppe for farming at a later point.

In this way, alfalfa helped convert rangeland into potential farmland. Japanese economists expected to reclaim 180,000 acres of land and another 110,000 acres of nomadic pasture in the Mongolian territories to produce over 100,000 tonnes of alfalfa by 1941. Because of its robust yield, alfalfa could support twelve times the number of sheep as wild grass could with the same surface area. Herders would be able to dry the alfalfa and store it as livestock fodder for the winter. Such an arrangement would keep animals in one location during the cold season and force pastoral nomads to settle down.

In order to rationalise pasture management with hybrid sheep and alfalfa, the Five-Year Plan called for a resettlement scheme that would consolidate permanent and seasonal gers (a Mongolian yurt) into what the South Manchurian Railroad Company called “concentration-villages” (归屯并户, Ja. 集团部落). Although these had existed prior to the Five-Year Plan, the Mongol territories experienced a 600% increase of such settlements between 1935 and 1938, from approximately 300 to 2,600 sites.

Forcing the nomadic Mongol population towards sedentary ranching utterly transformed the local environment. The Japanese occupation also altered the steppe ecosystem by mono-cropping alfalfa and then reclaiming the land for agricultural purposes. 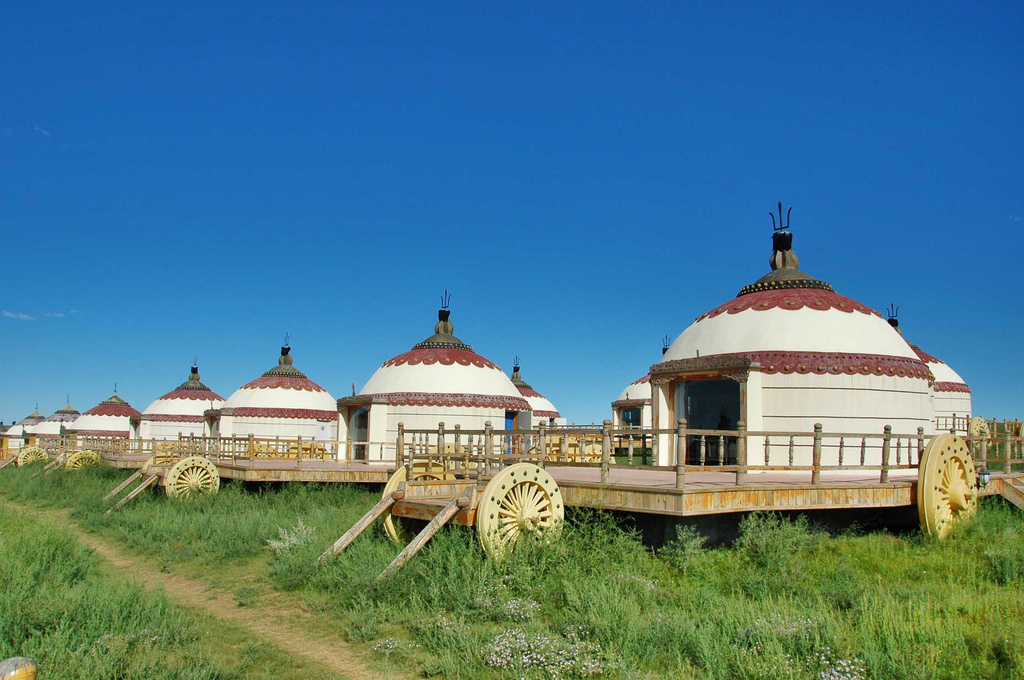 After the 1949 Revolution, Communist cadres also hoped to convert nomads into ranchers and farmers through agricultural technology. They viewed pastoral livelihoods as an obstruction to national progress, scientific rationalism and economic development.

State farms and ranches resumed the work of Manchukuo’s experimental stations to multiply and “improve” the herds. Chinese technicians imported Tsigai sheep (茨盖羊) from the Soviet Union to produce 20,000 hybrids via artificial insemination in 1955. Crossbreeding continued with Merinos as well. The genetic inheritance of imperialism exists to this day: at the beginning of the twenty-first century, the Inner Mongolia Autonomous Region was breeding ten million hybrid sheep every year, many whose earliest lineages date back to the Japanese occupation.

Beyond these entangled biological links between Imperial Japan and China, however, exist parallels between these two states and their relationship to nomadic populations in the borderlands. In 2003, China introduced a new campaign to “retire livestock and restore the grassland” not just in Inner Mongolia but also in Gansu, Ningxia, Qinghai and Tibet.

As the geographer Emily Yeh wrote previously on China Dialogue, this extensive programme blamed herders and their animals for land degradation and, as a result, temporarily halted and, in some areas, completely banned grazing. Other initiatives have included subsidising permanent homes, building livestock shelters, and planting winter fodder. In the name of environmental conservation, this resettlement scheme has removed thousands of herders from the steppe into apartment compounds in towns and cities – far exceeding the numbers moved under the Japanese.

Herders still face similar environmental concerns over steppe degradation, livestock development, and community resettlement. Murakami’s A Wild Sheep Chase has never truly left the rangelands of Inner Mongolia, as the state struggles to realise its dream to rationalise the borderlands and its denizens – both human and non-human – even today.