Is there a plan B for elephants? The next step in saving them is even harder - China Dialogue
Skip to content

It appears inevitable now that almost all legal domestic ivory markets will be closed. This is the plan A of a large consortium of animal rights and welfare organisations aimed at stopping elephant poaching – informed by the belief that legal trade provides cover for illegal trade and stimulates demand.

Do away with legal trade, say the ban proponents, and demand will fall. Any elephant ivory seen for sale will be illegal, resulting in the dual benefits of making it easy for law enforcement to take action and for consumers to avoid buying an illegal product. And increasingly this is a majority position. In September, International Union for the Conservation of Nature adopted a motion recommending the closing of domestic ivory markets globally. A few weeks later in October a similar proposal was adopted at the 17th Conference of the Parties of CITES, the international convention that regulates wildlife trade.

Animal welfare proponents believe that selling ivory legally creates a cover for laundering. “It’s a pity that countries with existing legal domestic ivory markets ignored the risks legal markets may bring to elephant populations and local communities due to the opportunities they create for the laundering of illegal ivory under the guise of legality,” said Grace Ge Gabriel, Asia regional director for the International Fund for Animal Welfare (IFAW).

And President Xi Jinping of China and outgoing US president Barack Obama apparently agree with the long-standing argument of both the Wildlife Conservation Society (WCS) and IFAW that legal trade promotes illegal trade. Both announced last year that they would prohibit ivory sales, as far as national laws in each country would allow. Most EU countries are also further restricting sales of ivory. In Africa, all but a few holdouts have already banned ivory trade, as have most countries in Asia.

In the near future, there is a good chance that almost all major ivory consuming countries will have domestic ivory bans in place. So, will these bans solve the elephant poaching problem? Probably not.

As Tom Milliken, an ivory expert from wildlife trade monitoring group Traffic, said: “All the paper protection in the world is not going to compensate for poor law enforcement, rampant corruption and ineffective management.”

I led a study of the drivers of ivory demand in eastern Asia in 2015. We found that roughly 200 tonnes of illegal ivory were smuggled annually into China-Hong Kong during the peak of the elephant poaching crisis from 2009-14. We estimated that only about 10 tonnes of it was processed a year to satisfy consumer demand. The balance of 190 tonnes a year was most likely stockpiled by speculators, betting that ivory prices would remain high.

The study estimated that about 3.5 tonnes of ivory was consumed in China in the legal sector each year, from ivory purchased in 2008 in southern Africa in a CITES-approved sale, making total consumer consumption about 13.5 tonnes a year in China. Doing the maths, three-quarters by weight of all ivory sold in China was illegal in 2009-14.

If you count in terms of pieces, rather than weight, more than 90% of ivory items sold in China was illegal. That’s because legal outlets produce and sell much larger pieces than their illegal counterparts, the latter of which sell more jewellery items and trinkets, which weigh less.

What is plan B for closing the illegal market in China, which takes in an estimated 70% of all poached elephant tusks from Africa? Closing the legal market will only account for 10% of the ivory consumed in China. The illegal ivory that consumers buy will increase from 90 to 100% of the market. Have the non-governmental organisations that are pushing for closure of legal domestic ivory markets formulated plans for closing the much larger black market?

I posed this question to Alexander Rhodes, head of Stop Ivory, at the 105-tonne ivory burning event in Kenya last April. Stop Ivory is a close partner with WCS and IFAW, who said: “Yes, that is something to think about.” 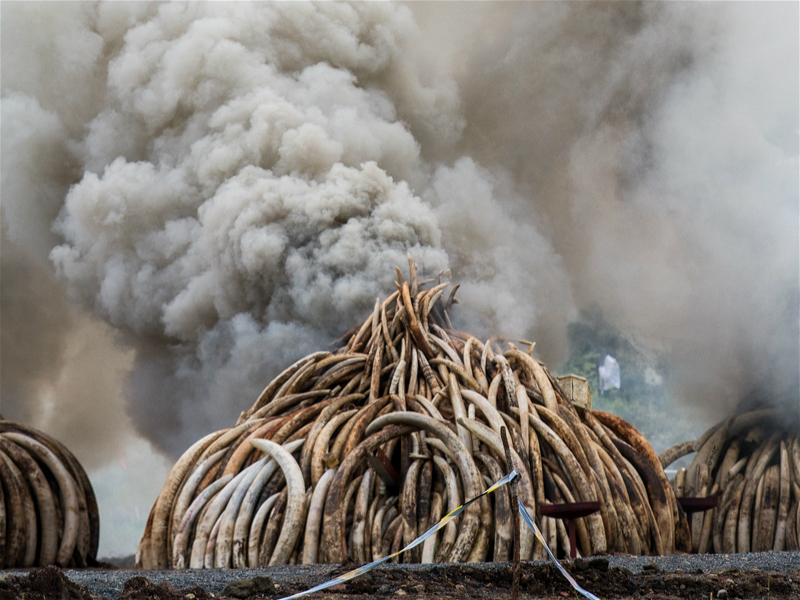 105 tonnes of ivory and one tonne of rhino horn burn in Nairobi National Park in April 2016. They were set ablaze in the largest ivory burn in history. (Image by Mwangi Kirubi)

Studies have found that the majority of illegal ivory in China and elsewhere is sold online in members only chatrooms and through social media sites, which are difficult to monitor.

Now that the goal of a total ban on legal international and domestic ivory markets is in sight, waving the victory flags is perhaps premature. Elephants still have to worry that their tusks – obtained exclusively from illegal killing now – will continue supplying the huge black market.

And if it is speculation and stockpiling of tusks, rather than “insatiable” consumer demand, that is driving poaching, plan B must take this inconvenient fact into consideration. Plan B had better be good.

This article was originally published in The Guardian

Why legal domestic ivory markets need to be shut down