In 2000, the Amur leopard was hurtling to extinction. There were only about 30 left in Russia, and just two in China.

Today, the picture is more hopeful. Though it remains the world’s rarest big cat, there are now close to 90 living across both countries.

Siberian tigers, who have also been roaming the Russia–China border since before those nations existed, have seen a similarly impressive recovery. In the 1940s, there were as few as 40 still alive. Now there are as many as 540.

The remarkable comeback is largely due to shared work between China and Russia, cemented in February when the park administrations on both sides of the border signed a memorandum of understanding for further cooperation.

This month they are meeting again in Vladivostok to create a work plan, and the details of an unprecedented trans-boundary nature reserve will likely emerge. The area being discussed will provide protected habitat for those leopards and tigers now wandering the vast wilderness in Russia’s far east and China’s north-east.

How did the collaboration begin?

Cooperation on big cats between the two nations began two decades ago. In 1998, the Forestry Department of China’s north-eastern province of Jilin invited Russian biologists to conduct a survey of tigers remaining in its forests. The scientists walked the border together and a partnership was born. 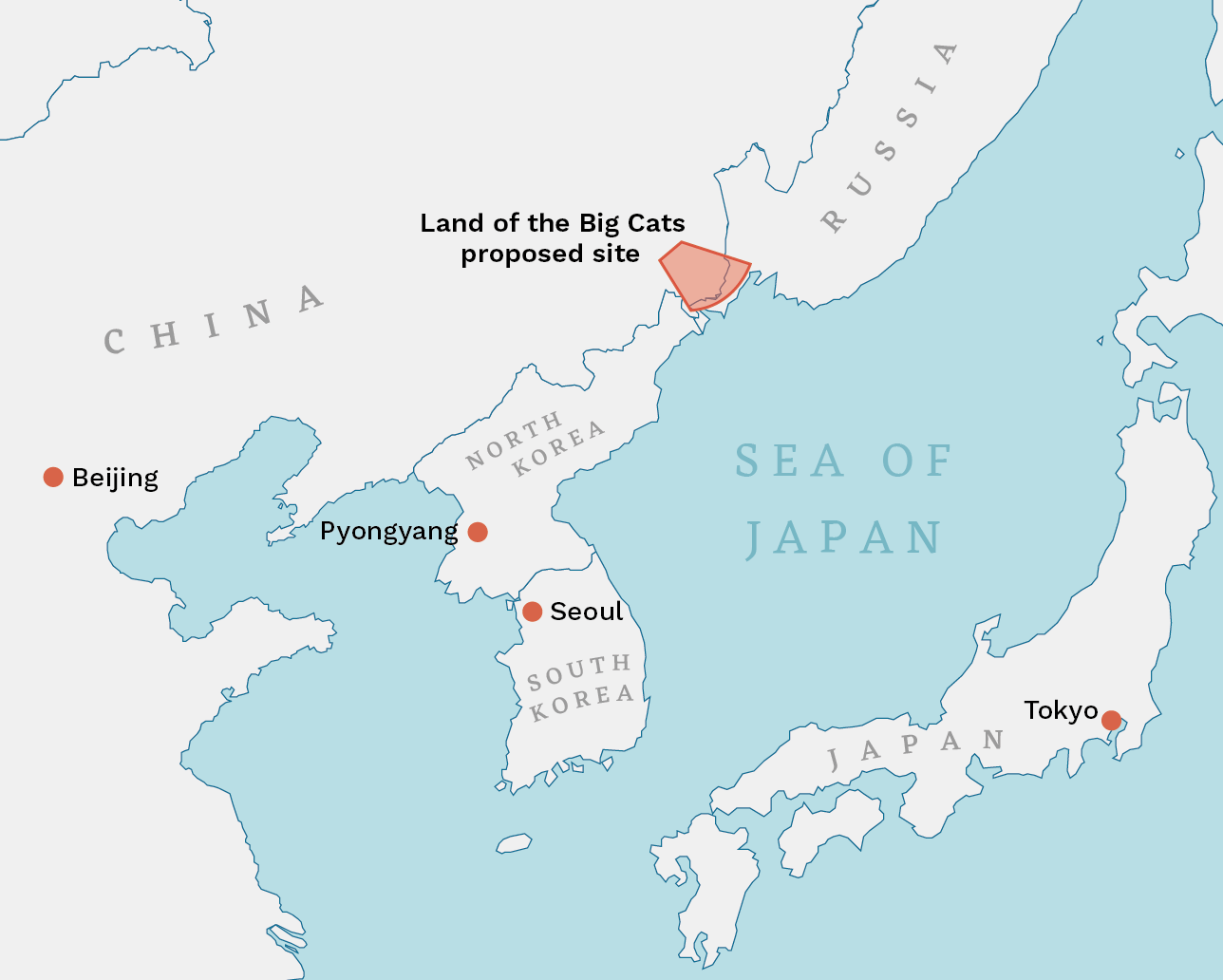 “We did find some tracks. They appeared to be all males, which meant there were probably no breeding females in the area and in all likelihood these were animals just dispersing across from Russia,” said Dr Dale Miquelle, an American tiger expert and director of the Russia program for the Wildlife Conservation Society who helped instigate the original survey.

Miquelle recognised that the hunting snares they found were killing the tigers’ prey, making it impossible to support a full population even though the forest itself was healthy. He knew that if the Chinese could minimise human influence in the area and increase prey populations, the tigers would spread in numbers from Russia and establish home ranges in China.

How did the ‘Land of the Big Cats’ evolve?

In 2001, Jilin province established the Hunchun National Nature Reserve, a sliver of protected land running along the border with Russia and south to the small spit of Chinese territory that borders North Korea to the west and Russia to the east. Tiger numbers gradually rose, increasing 15% between 2005 and 2015.

Ten years after the reserve was founded, Dr Ge Jianping, then vice president of Beijing Normal University, and a team of researchers started monitoring tigers in earnest, setting up cameras and looking for each animal’s unique stripe pattern in the images they caught.

Using this data and the access to Chinese policymaking that researchers like Miquelle lacked, Ge was able to advance a proposal for a national park to replace the existing reserve. The new 14,600 km2 park, stretching 60% further than Yellowstone Park, was established in 2017 as a pilot to be incorporated into a new national park system in 2020. 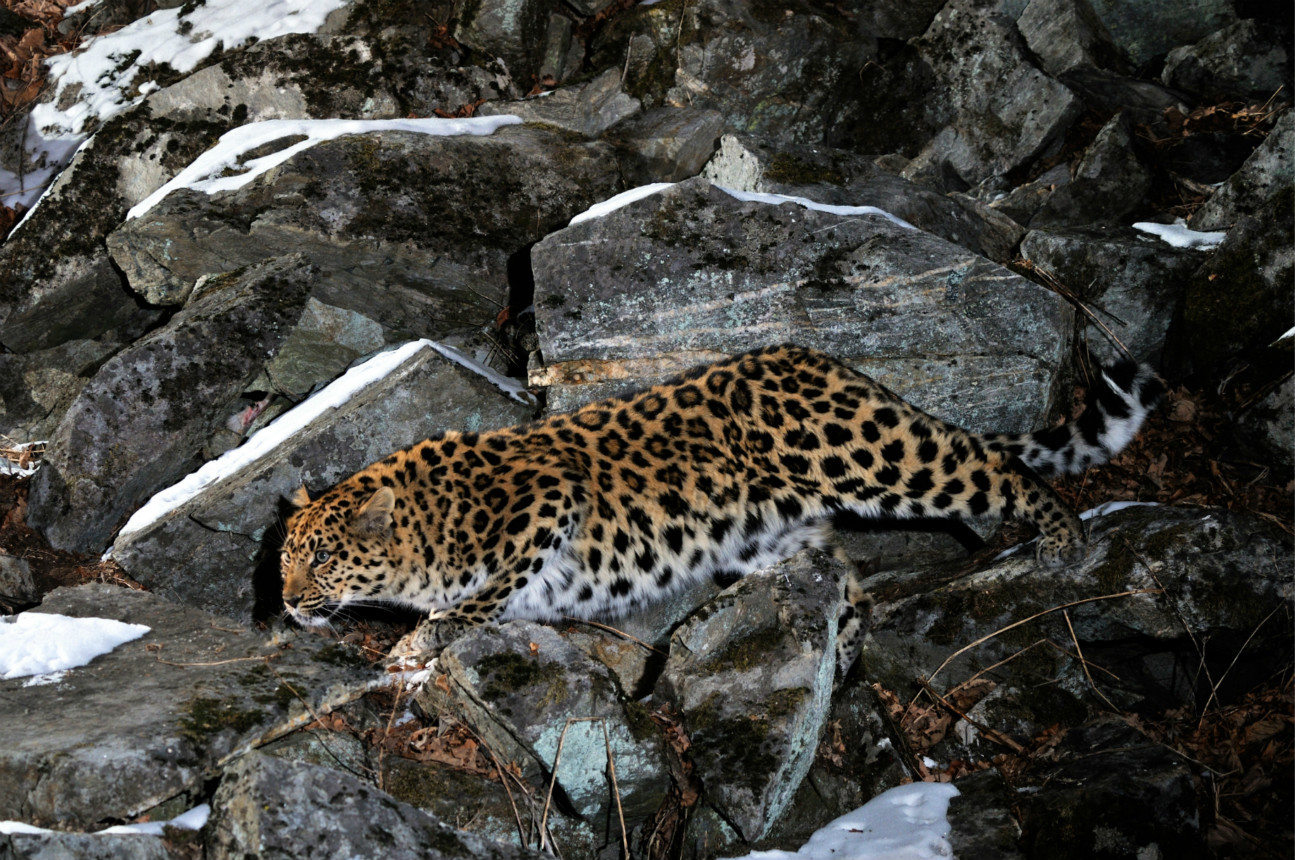 There are positive signs that the elusive Amur leopard is creeping back from the brink of extinction (Image: Alamy)

Support for tiger and leopard conservation was burgeoning on the Russian side too. According to Yury Darman, Russia created a system of protected areas that together covered the majority of the leopard range, thanks in part to support from Sergey Ivanov, the former chief of staff of Vladimir Putin. In 2012, these were merged to form the Land of the Leopard National Park, which Darman is deputy director of. That large park abuts the border with Jilin and nearly reaches Amur Bay to the east. Between 2000 and 2018, the leopard population tripled, Darman told China Dialogue.

Even with Ge’s monitoring in place and national parks established on both sides of the border, however, it was difficult for biologists to get an accurate picture of the leopard and tiger populations, their behaviours and needs. To make things more difficult, individual animals frequently cross the border. “Tigers don’t have passports” said Liu Peiqi, director of the Amur-Heilongjiang Ecoregion for the WWF.

Last year, following years of trust building and an agreement by their governments, Russian and Chinese researchers shared their monitoring data for the first time, resulting in an unprecedented survey of the transboundary leopard population, and the first reliable global population count.

The consolidation of the partnership between the two countries is partly due to a closer relationship between the leaders. At a meeting in Moscow in June this year, presidents Xi and Putin signed a joint declaration that included reference to creating a transboundary park to protect Amur leopards and Siberian tigers, joint monitoring, and establishing nature corridors on the border.

Video footage from a 2007 WWF survey on a group of Amur leopards in the Russia’s far east (Source: WWF via Vimeo)

The park, “Land of the Big Cats,” would combine China’s Northeast Tiger and Leopard National Park with Russia’s Land of the Leopard National Park and Kedrovaya Pad Nature Reserve. Putin has already ordered the preparation of the paperwork on the Russian side, and Darman expects China to announce similar moves soon, possibly at the UN Convention on Biodiversity summit in Kunming next year.

Despite the cooperation with Russia, China still faces significant challenges in its conservation efforts. Wang Aimin, China director of the Wildlife Conservation Society (WCS), said that important management decisions have been slowed down because of confusion over staffing roles within the national park, the result of several smaller protected areas being rolled into one. He is particularly concerned about human–tiger interaction.

Unlike on the largely uninhabited Russian side of the border, around 100,000 people live in the region surrounding the Chinese national park. Many are cattle ranchers, and they typically leave their animals to graze on their own, making them vulnerable to tigers and disturbing the cats’ natural hunting patterns. Based on Russian conservation experience, WCS has suggested creating strict grazing areas for the remaining villages to protect both cattle and tigers and maintaining human-free areas to act as a cradle for the tiger population. The park is also considering relocating several villages.

For now, however, many farmers are being required to keep their cattle inside while a zoning plan due to be released a couple months ago continues to be hashed out. This means crippling financial burdens for the ranchers. What the solution will be, and when it will be implemented, remains to be seen. 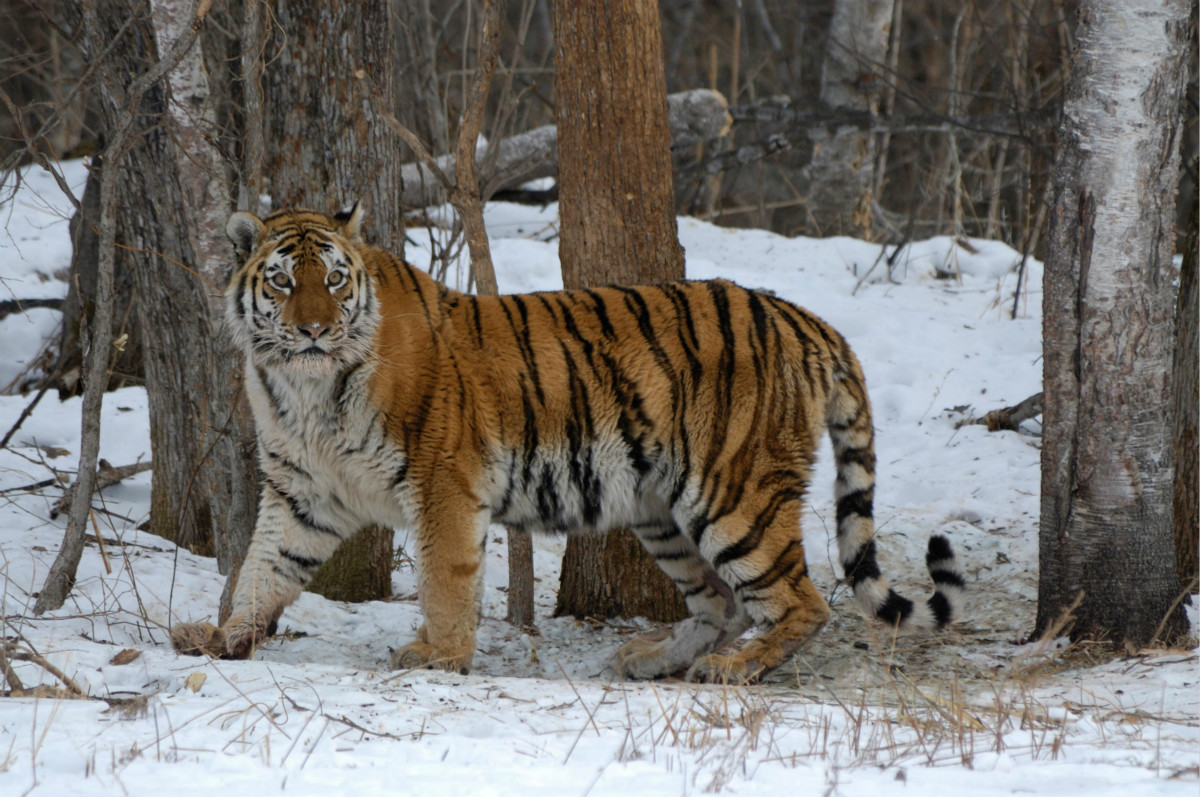 There are now as many as 540 Siberian tigers living in the wild, primarily close the China-Russia border (Image: Alamy)

There have been discussions about banning cattle from the park entirely, but Wang cautions against that: “There are so many local people relying on that as a big part of their income.”

He hopes China’s park managers will continue to look to the Russians for advice on how to manage human–tiger conflicts. On the other side of the border, Miquelle sees continued opportunity for Russia to learn from Chinese areas of strength, such as fire management and real-time tiger monitoring.

“I think this exchange of information is going to continue. I think that joint management is going to evolve, and consequently the opportunities for tigers, leopards and the ecosystem in general is going to get better. So I think we’re going to see that process really accelerate in the next couple of years,” said Miquelle.

The plight of the pangolin in China