Seventeen families gathered to take part in Time Farm’s sports day earlier this year, attracted perhaps by the unusual nature of the activities, which included a vegetable hauling competition and a weeding race.

The eco-farm’s founder, Gu Yingjun, hoped the event would help promote ideas of agricultural sustainability and build closer links with his customers.

The 48-year-old established the farm in Jiangning, a district of Nanjing in Jiangsu province, in 2012, after quitting his job as an IT consultant in the banking sector. A year later, the government announced plans to create a “resource-conserving and environmentally friendly agriculture sector” by 2020. Gu had chosen the right time to make his move. But mainstream agriculture keeps prices low, and Gu’s farming methods are laborious and costly. It was six years before his farm broke even.

“Despite our high costs, we can’t put prices up or things won’t sell. We need to price our products within an acceptable range,” Gu explained.

This, in a nutshell, is the obstacle to China’s agricultural transition. 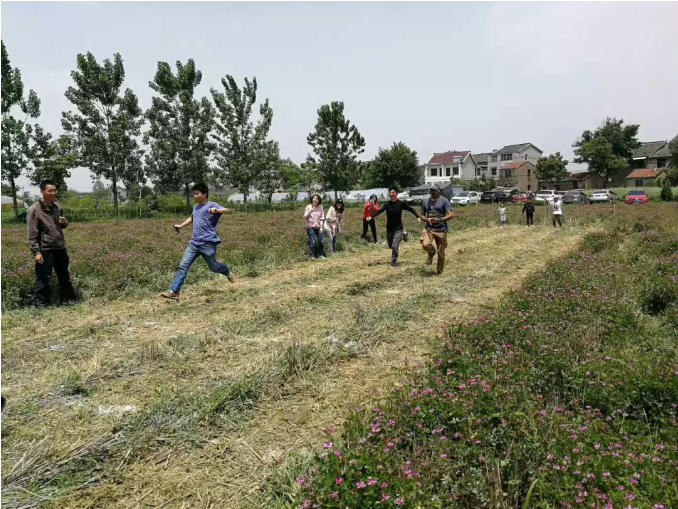 A family relay race at Time Farm. The farm hopes events like its sports day will strengthen relationships with consumers. (Image: The Fifth Phase Community)

At a conference held in late April in Nanjing to promote eco-agricultural practices, Qiao Yuhui of the China Agricultural University offered one example of the huge cost handicap facing greener agriculture. On an ordinary farm it takes one person an hour or two to control weeds using chemical herbicide over a mu of land (0.16 acres). The chemical-free approach can take a team of workers days.

Time Farm consists of 20 mu (1.3 hectares) of rice, more than 20 mu of vegetables and over 10 mu of orchards and poultry. The farm recycles its own waste and its loose soil barely needs ploughing. But the fertility of the soil means lots of weeds.

Gu says the farm employs two elderly people from the local village to help out year-round, but at busy times five or six people are needed to keep up with the weeding. Daily wages are 100 yuan (US$14.53), so the refusal to use chemicals is hugely expensive for the farm. And most consumers aren’t keen to pay extra for these hidden expenses.

Experts say the government should support small-scale eco-farmers with funding or subsidies. Luo Shiming, formerly dean of the South China Agricultural University, said: “There’s no lack of money in government. The question is how it’s used. The authorities need to intervene to control market failures such as disparities between costs and prices.”

One of the main reasons consumers won’t pay the extra for green products is a lack of confidence.

“Consumers worry the products aren’t actually organic,” says Shi Yan of eco-farm Shared Harvest in the eastern suburbs of Beijing. “People have certain fixed ideas about organic or environmentally friendly products: that they should be small and ugly and blemished by insects; or attractive and nicely packaged.” Consumers are dubious about products that don’t meet their expectations.

The way Shared Harvest is run may offer one route to building trust between farmers and consumers. Founded in 2012, Shi’s farm is a membership organisation. It now has over 1,000 sign-ups, and an annual turnover of more than 10 million yuan (US$1.45 million).

One of Shi’s principles is regular face-to-face interaction with her customers, who she invites to the farm to see how it works.

In 2003, China started an organic certification system to build trust, but this has been problematic for small farms.

Shi once tried to use certification to win consumer trust. But on average it costs about 10,000 yuan (US$1,453) to certify one product, and the process has to be repeated every year. Her farm produces over 40 different products and could not possibly afford this cost.

“The certification system only helps those companies or cooperatives with the money to use it,” said professor Qiao.

But the fact remains that small, household-scale farms are the main force in Chinese agriculture. These operations do not have the spare cash or level of management needed to access the organic certification system.

Traditional Chinese agriculture emphasised both the use and care of the land, as well as self-sufficiency. Resources and waste were reused in relatively eco-friendly ways.

This changed with the industrialisation of agriculture, which Luo Shiming explains took place over two stages. Firstly, between the foundation of the People’s Republic of China in 1949 and the start of reform and opening up in 1978, environmental concerns took a back seat as the authorities pushed for bigger harvests to feed a growing population. Then from 1978 to 2011, the industrialisation of agriculture sped up and the environment was overlooked even further.

Luo is 73 and has lived through both those periods of change. “For generations the Chinese people struggled to ensure there was enough food, and that meant a fixation on increasing harvests. So environmental concerns were gradually forgotten and traditional farming practices lost,” he said.

But policies focused on increasing output started to shift in 2013 with the government’s push towards a more environmentally friendly sector. In 2015, the No.1 Central Document – an annual proclamation setting the direction for the year’s agricultural policy – stated that agriculture has “multiple functions” beyond simply feeding the nation, including social, cultural and environmental roles. This year’s document again referred to the development of sustainable, “circular” agriculture.

But why, if output is no longer the sole standard of success, has it been so hard to transform Chinese agriculture? To find out, Chen Weiping, associate professor at Renmin University’s School of Agricultural Economics and Rural Development, interviewed over 50 farmers in various provinces, including Shandong, Fujian and Sichuan. He discovered the majority still have a blind faith in chemical fertilisers and pesticides, and a desire for more mechanisation and automation to reduce the manual labour they need to do.

In addition, Chen says the language of government policy doesn’t always translate into a clear direction for farmers. While there are some concrete programmes to encourage ecological practices, such as subsidies on organic fertilizers, these run alongside existing incentives that pull in the opposite direction, such as support for farmers planting large quantities of soybean and corn, and those promoting mechanised planting.

The new farmers are seen to be bringing fresh blood into the sector. Chang Tianle, founder of the Beijing Organic Farmers’ Market, says the new arrivals are good managers who want their farms to be environmentally friendly. They care about long-term soil fertility, are cautious about the use of chemicals, and keen to develop good business models.

However, Chang adds, the new farmers often don’t stay long because schools in rural areas lag behind those in cities.

“These young, university-educated parents want their children to live in the countryside, but also to get a good education,” she says.

Shi Yan thinks improvements in the quality of living and public services such as education, sanitation and infrastructure are key to retaining the new farmers.

“If you’re talking about agriculture,” Shi says, “you have to talk about the village as a whole.”