A wave of high-tech surveillance devices is being developed to combat wildlife poachers and traffickers, and monitor animal populations. Drones, camera traps, smartphone apps and artificial intelligence (AI) all have a role to play. They’re especially needed because trafficking in protected species has moved online, to social media, and the dark web.

Collaborations between conservationists and tech developers are producing targeted, straightforward to use tools. For instance, the Wildlabs.net community works with the UK government and the Zoological Society of London (ZSL), and is funded by Google and “Internet of Things” company Arm. It is launching a machine learning innovation hub to design algorithms to protect animals in the wild, and prevent cross-border trafficking. Lack of internet access in remote areas of developing countries is often a challenge. However, satellite technology and low-cost solar-powered signal extenders known as mobile relays are showing promise.

chinadialogue spoke to a range of technology developers on the front line of combatting wildlife crime.

Making the most of limited manpower in vast national parks and wilderness areas is vital as even well-trained and equipped rangers cannot stop poachers if they are far from threatened animals.

The Spatial Monitoring and Reporting Tool (SMART) has been designed to solve this problem. It’s being used at 2,000 sites globally to monitor populations of elephants, snow leopards, rhinos and dolphins. It was developed by WWF, the London and Frankfurt zoos, and the Wildlife Conservation Society. 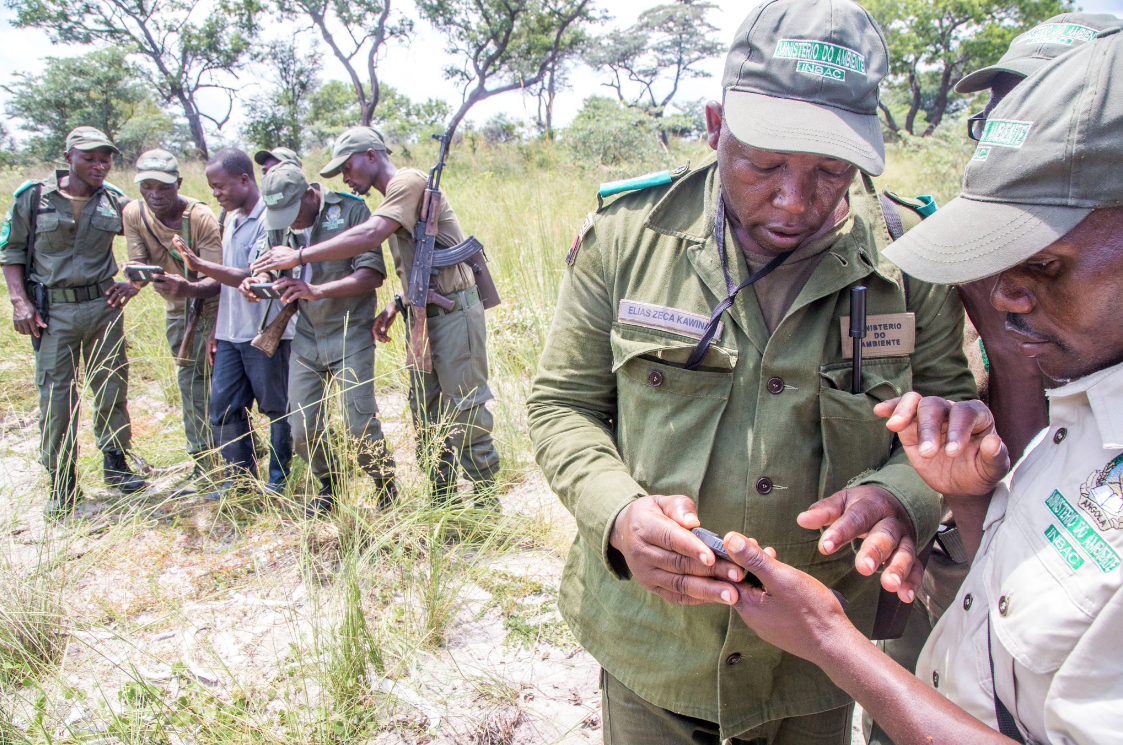 SMART is being used to monitor populations of elephants, snow leopards, rhinos and dolphins (Image: SMART)

SMART enables conservation teams to collect, analyse and transmit data on wildlife, illegal activities and protection patrols, leading to better targeted resources and more agile responses. The system is constantly updated with user input, for example, it can now carry out biological surveys, where conservation teams collect data on wildlife populations and condition.

In Kenya’s Maasai Mara region, SMART has quadrupled the coverage by patrols, contributing to a 74% decline in poaching and zero wildlife poisonings in 2017.

Maasai warriors have also been trained to use it to protect their cattle by monitoring the movement of lions, leading to a 67% reduction in retaliatory lion hunts since 2010.

Monitoring sound can be a powerful tool to detect animals and eavesdrop on illegal activities. However, most ground-level monitoring equipment is too large, costly, and inefficient, consuming battery power and manpower on checking long recordings.

AudioMoth addresses these problems by using machine learning to “train” the equipment to pick out and record only relevant sounds – such as a particular animal call, gunshots or chainsaws.

The system, which is being developed by PhD students at the universities of Southampton and Oxford, brings huge savings in battery power, storage and time needed to review audio files. It is much cheaper and more versatile than traditional audio technologies.

In the case of gunshots, the equipment sends an alert to a ranger station so patrols can be sent out immediately. In Belize, the government has used AudioMoth to estimate poaching levels of small mammals in protected areas and target ranger patrols.

AudioMoth was released as open-source technology in 2017.

DNA analysis of blood or saliva samples to identify protected wildlife is especially useful when traffickers are trying to pass off a protected species as another animal. Enforcement officials may suspect the animal is protected, yet not have sufficient confidence to block the shipment. What’s more, countries where wildlife smuggling is most acute may lack testing facilities and have to send samples abroad for analysis.

Leicester University researchers are working with Oxford Nanopore, a company specialising in products that analyse the DNA molecules of any living thing cheaply and simply, and outside the traditional laboratory environment. 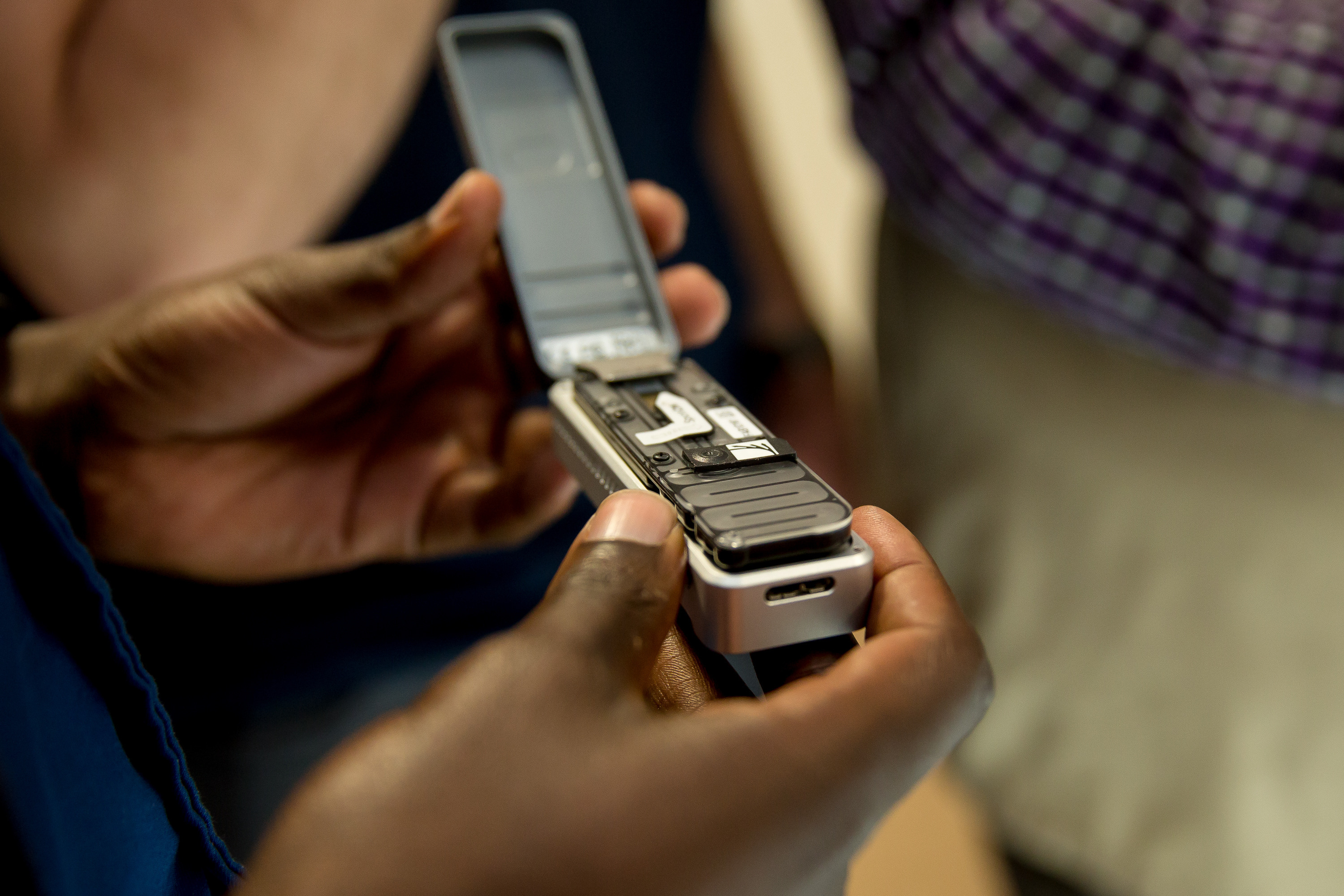 The team is developing a test to allow a suspicious sample to be identified as quickly as possible at docksides, markets or customs posts. It needs to be simple enough to be used by someone with no scientific training and quick enough to identify samples within a couple of hours, so that it can have a direct impact.

They are due to pilot the technology in live enforcement operations with Interpol in early 2019.

Eventually, they hope the technology will allow samples to be forensically validated so they can be used as evidence in court.

India’s Kaziranga National Park is home to two-thirds of the world’s one-horned rhinos, which were nearly wiped out in the 1990s due to popular beliefs in China and Vietnam that rhino horn is a virility tonic.

Drones are now being used in Kaziranga park for continuous monitoring of the rare rhinos, tigers, elephants and other wildlife.

Kaziranga is 480 square kilometres and its most vulnerable species are most active at night, so drones are far more efficient at catching poachers than ranger patrols alone. Carrying thermal imaging and mapping equipment, plus day and night-capable cameras, their video images can be monitored on the ground in real time.

Drone images can also be used to provide regular monitoring of remoter areas, including a wildlife census and vegetation analysis. India’s government has written drones into its 14-year wildlife plan.

Drones are also being used in Indonesia to survey orangutan habitats, and in Belize to monitor illegal fishing.

Tracking criminal funds is as important as tracking poachers. Startup RisikoTek, based in Singapore, has developed software to trace illicit funds from trafficking through the financial system. It uses complex data analytics and AI to detect criminal patterns within the data. Algorithms link data from NGOs, media reports, trade and corporate sources to help identify criminal entities and their networks. The information can then be used by banks, who can add in their own data to track payments made by – or to – the suspected criminals.

RisikoTek has tested the technology and is now looking to trial its system with a bank and find more NGOs willing to share data with a private sector startup.

Why China Dialogue is publishing a new series on tiger conservation