From sea to source, the Mekong River stretches nearly 5,000 kilometres through six countries. More than 60 million people depend on its waters for survival, and it is second only to the Amazon in its biodiversity. Photographers Gareth Bright and Luke Forsyth spent eighteen months travelling from the Mekong delta in Vietnam to its source on the Qinghai-Tibet plateau – to document the importance of this great river for the people who live on its banks. They came back with harrowing accounts of the struggle people face living along the river.

Gareth spoke to The Third Pole about the trip. Footage from the trip can be found at the project website: The River’s Tail.

The Third Pole (TTP): Why did you decide to make this journey?

Gareth Bright (GB): It really started as a boyish adventure. We were living in Cambodia covering the 2013 elections and wanted a break from hard and fast news. We bought a fishing boat in a floating village in Tonle Sap lake and with the help of Cham ethnic Muslim community learnt to [use it] …The intention was to use the boat whenever we had spare time to travel up the river. Then we did a blog post and an NGO from Singapore got in touch and [asked if we would] travel all the way up the river in the boat. This was impossible, but we managed to raise money from other sources and spent 18 months travelling to the source, using different forms of local transport – river boats, motor bikes – stopping and coming back to Phnom Penh. The river became our home, our office, our life. 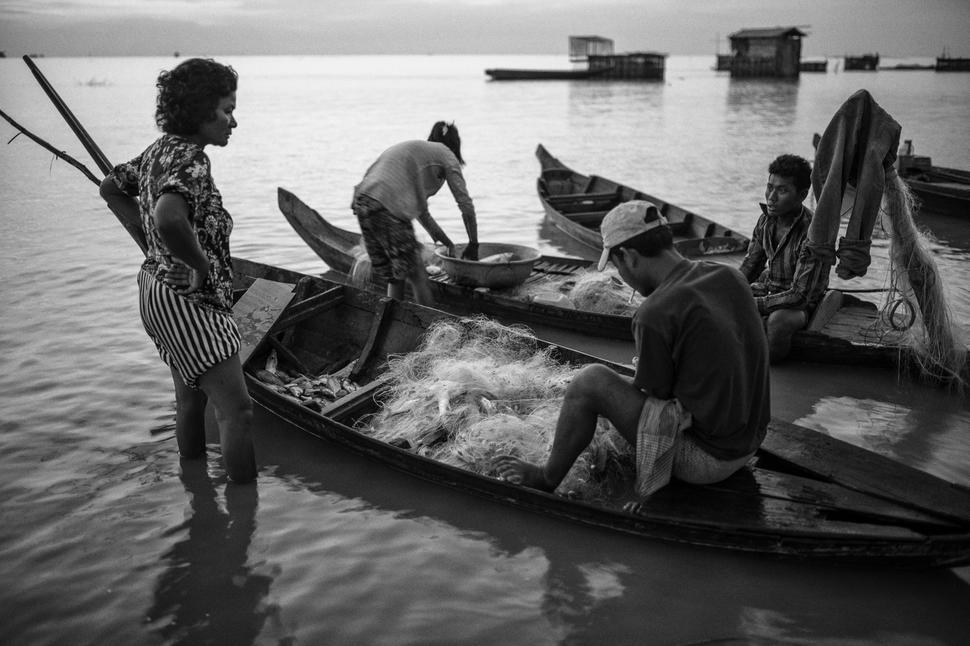 The Tonle Sap in Cambodia is one of the world’s most productive freshwater ecosystems and the main source of protein for the 15 million people living in Cambodia, but fish are disappearing

TTP: Were you surprised by what you discovered?

GB: Naively, we thought we’d find something beautiful remaining, but really we found disaster after disaster. Every community we went to there was another problem. The whole thing was in a mess and we saw very little comforting all the way from the delta to Yunnan, China (where the river is known as the Lancang). People have existed the same way for thousands of years, then this all changed very quickly and they have had no guidance on what to do. Population growth, industry, and no one is prepared for what to do – they live in continual confusion. 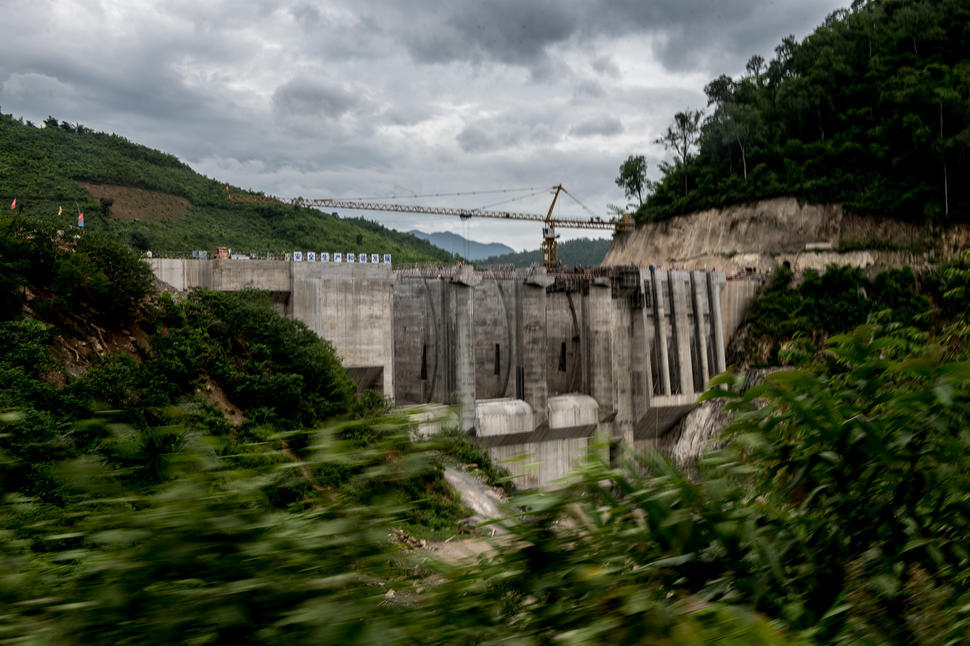 The construction site of the Nam Kong 1 hydropower dam. Three Chinese-owned dams are slated for the Nam Kong river, and they will collectively inundate more than 1500 kilometres of land, displacing thousands of residents.

People are losing their culture. For example, in Laos we stayed in a village 60 kilometres south of Luang Prabang. People lived there for 400 years in the same way and they were in relocation camps for the construction of the Nam Kong dam. Prior to this they’d never needed money or bought anything. They thought that life would be awesome, but now they need money. They get it from Sinohydro and they work on the dam, but they can’t hold cultural events anymore. They can’t access the forest anymore for festivals because it’s too far away from their home. They make money, have TV, internet…but they’re losing their culture. It’s sad, alcohol has become a problem, so has domestic violence. 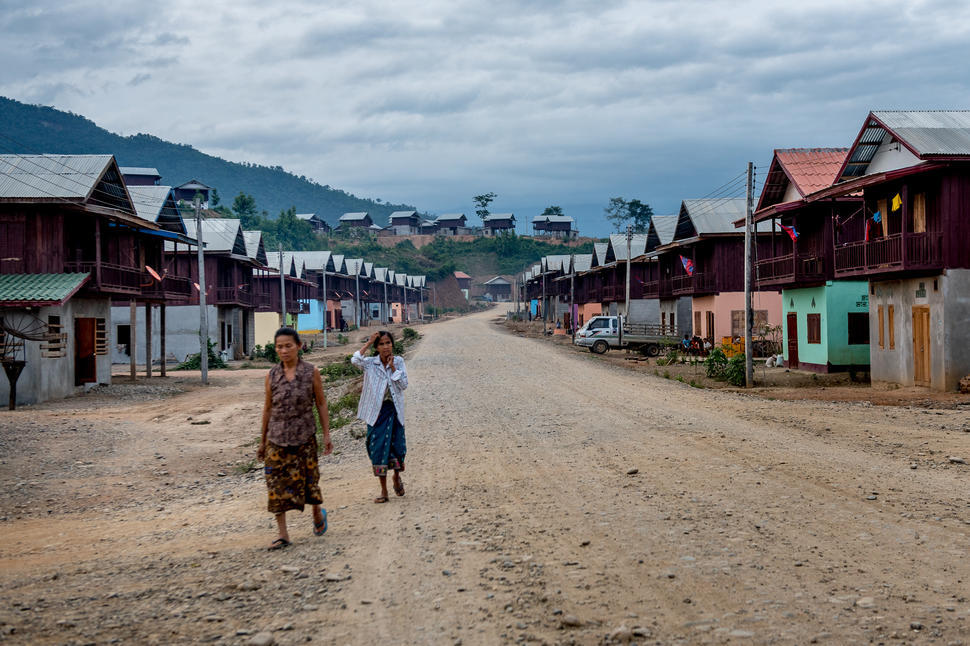 Residents of Samaky Sai, or “United Village”, walk along one of the camp’s main roads. Most of the residents used to be farmers or fishermen in remote mountain villages, but since arriving in Samaky Sai have found few employment opportunities other than Sinohydro – the company responsible for their displacement. 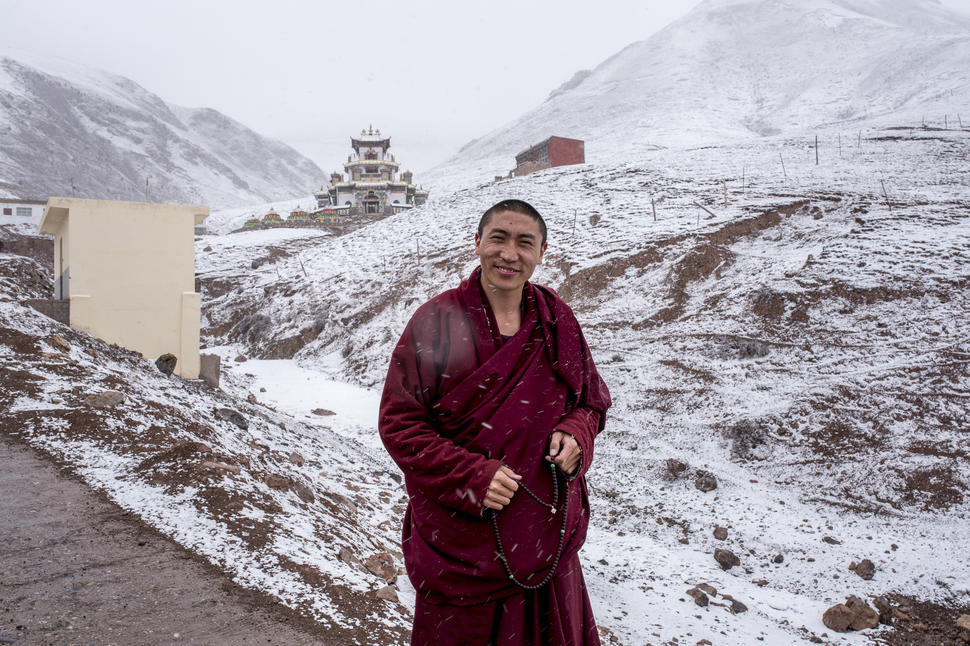 The monk had collected water samples from the river over the past 40 years and kept them in a shed so scientists could analyse them and look at what’s happening to the river. 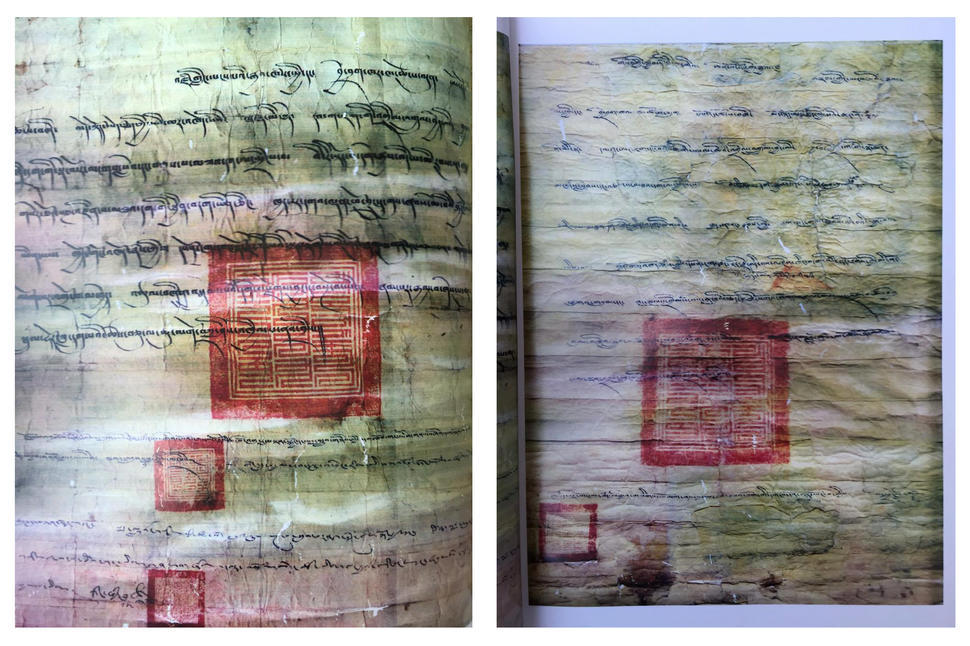 “This is the seal of the 5th Dalai Lama,” Lama Drubga, Trinli Gatso’s 67-year-old father, told us as he ran his finger along a digital scan of an ancient document. “He asked my ancestor specifically to look after the source of the Mekong, and my family has been doing this ever since. The 6th and 7th Dalai Lamas also asked us to do this, and so we have continued the work. This was 18 generations ago.”

TTP: Did people along the river make links between what was happening to them and to changes elsewhere?

We met one old nomad in Tibet who had dedicated his life to cleaning rivers. In Tibet this was the only time people we met seemed concerned about the impact of what they did on the river downstream. 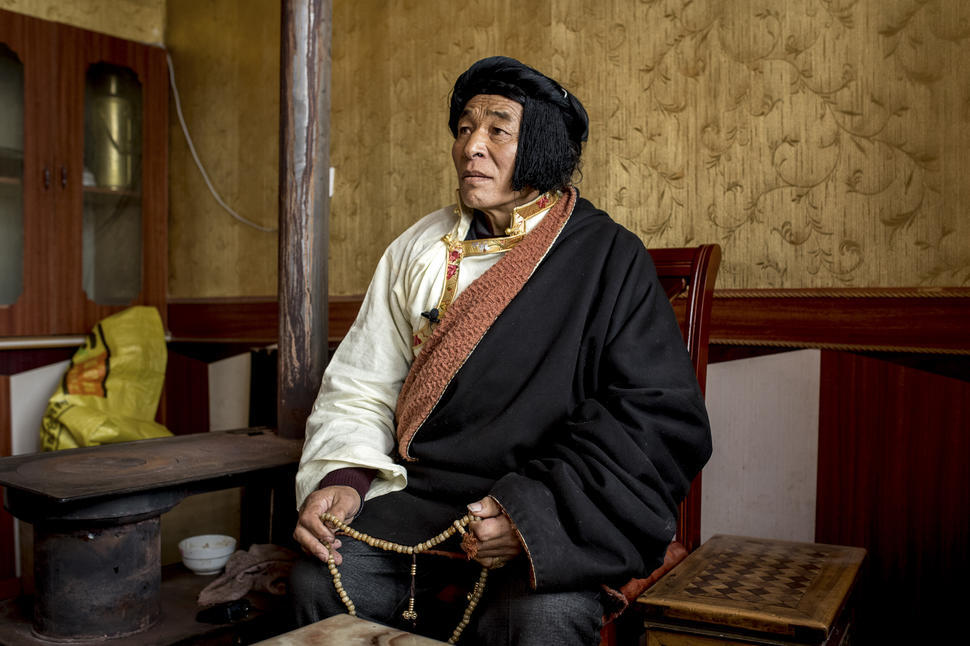 Tenzin Ngudup, 64, is part of a network of volunteers who clean garbage from the Mekong River. The job is often dangerous, yet he says he would be happy to sacrifice his life for the benefit of the millions of people living downriver. Zado, Tibet (Qinghai, China).

In Cambodia, people who had to be resettled didn’t like dams but they weren’t thinking about fish migration or the impact on Tonle Sap lake. In Vietnam they were angry with the Chinese and knew about the dams – they had seen the drop in the water levels in the delta. In one village, UXOs (unexploded ordinances) that had been underwater since the war – napalm containers – emerged as the river level fell, oxidised and exploded, burning entire fields. I heard of 6-7 incidents like this. The pollution has affected fish stocks, there is [agricultural] run-off in Cambodia and plastic in the river. People are angry with the Chinese, yet they still put shit in their own river. 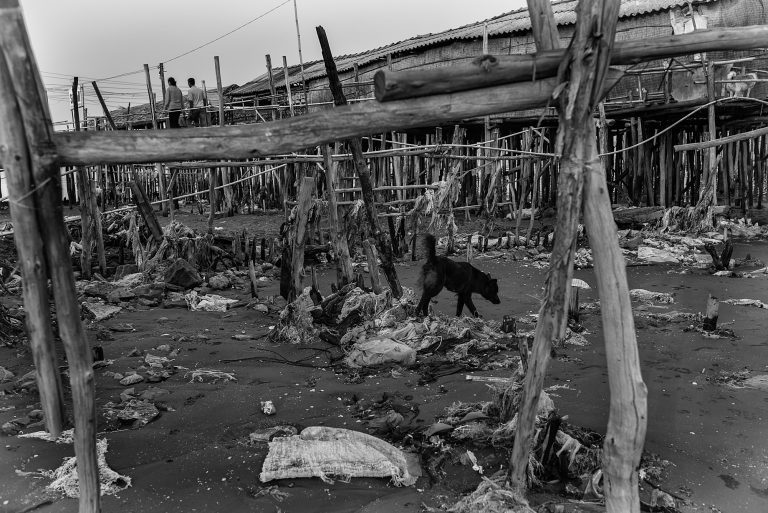 A dog walks across a plastic-strewn beach on the coast of the South China Sea. At low tide, the cumulative waste dumped into the Mekong and the ocean gather around the pilings of coastal houses. The South China Sea is known as the Eastern Sea by the Vietnamese.

TTP: Are there any communities in different countries working together to save the river?

At Sesan II on the border of Laos the [Cambodian] community is battling the dam but has no communication over the border. It’s a transboundary river, but every country is in some kind of political turmoil. There is only one place in the golden triangle where Thai and Laos ethnic Dai people are working together. But no information is shared up and down the river. Unless people are immediately affected they have no idea about the dams, they don’t leave their own villages. 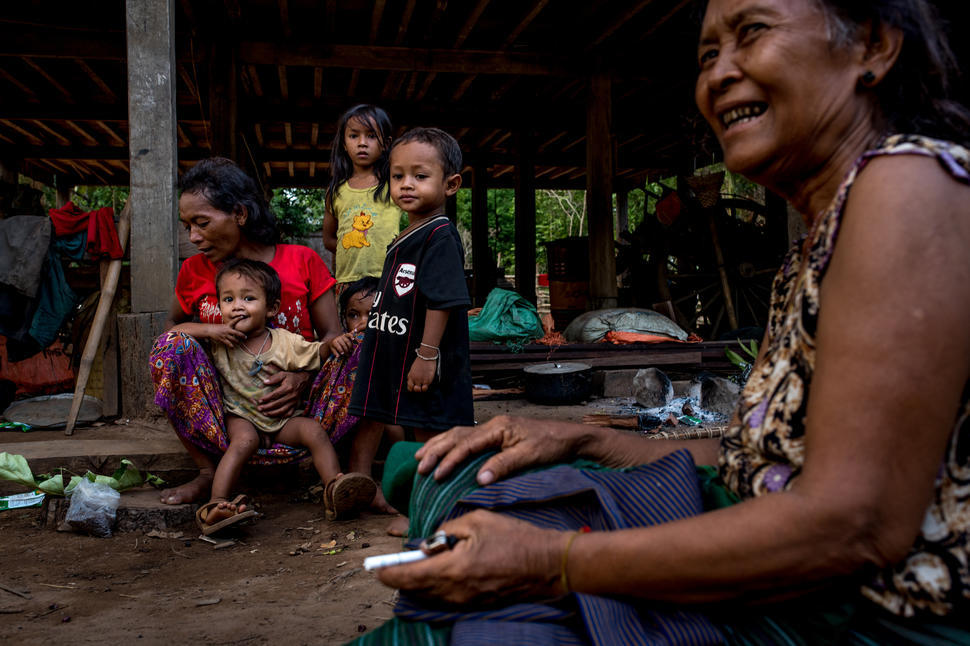 A Bunong family in Kbla Romeas village, northeastern Cambodia. The Bunong are an ethnic minority tribe who inhabit parts of northeastern Cambodia, and rely heavily on natural resources to sustain their community. The Sesan II dam, if built, will displace multiple minority tribes, as well as substantially impact their ability to farm and fish. The community is currently divided; roughly half the villagers have accepted a resettlement compensation package, while the other half staunchly refuses to leave their land. 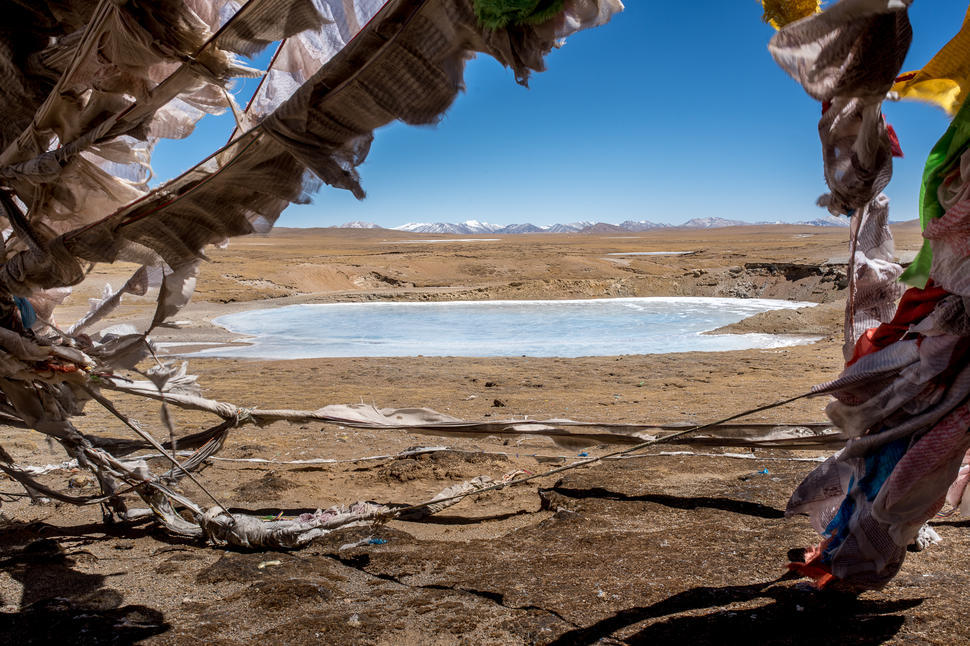 A frozen pool that is part of the Lasagongma Springs – the source of the Mekong River. (Image: Luke Forsyth)

To read more about the journey visit The River’s Tail. The black and white photos are taken by Gareth Bright and the colour photos are by Luke Forsyth.