China’s surging imports of Brazilian beef have increased the likelihood it is buying from companies linked to illegal deforestation that spews tonnes of carbon dioxide into the atmosphere, according to a new report by the watchdog Trase.

However, the Trase report calls for coordinated action by the government and Chinese buyers that could solve the problem as only a few Brazilian municipalities and meatpacking plants are involved. This would have the added benefit of helping Brazil meet the goals of the Paris Agreement.

Data from 2017 analysed by Trase show that China imported beef from more than 1200 cities, but just 25 were responsible for half the risk of CO2 emissions linked to deforestation. A company’s deforestation risk is assessed by looking at the annual rate of deforestation in the municipalities it purchases from. The complexity of beef supply chains makes it difficult to identify precisely where cattle bought by large meatpacking companies is sold on.

“This data is essential for Chinese buyers who take climatic and environmental risks seriously and want to mitigate them: their efforts can be focused on these high-risk areas,” said André Vasconcelos, a researcher at Trase and one of the authors of the study.

The report shows a window for action at a key moment for the Brazilian Amazon, as the dismantling of environmental protections by President Jair Bolsonaro’s administration has led the rate of deforestation to double since August last year, according to preliminary data from the Brazilian Institute for Space Research (INPE).

After trees are felled, the fire season that peaks around August and September is often the final step in clearing land to make new pasture. This means that expanding deforestation could make this year’s fire season even more destructive than last year’s, which shocked the world. 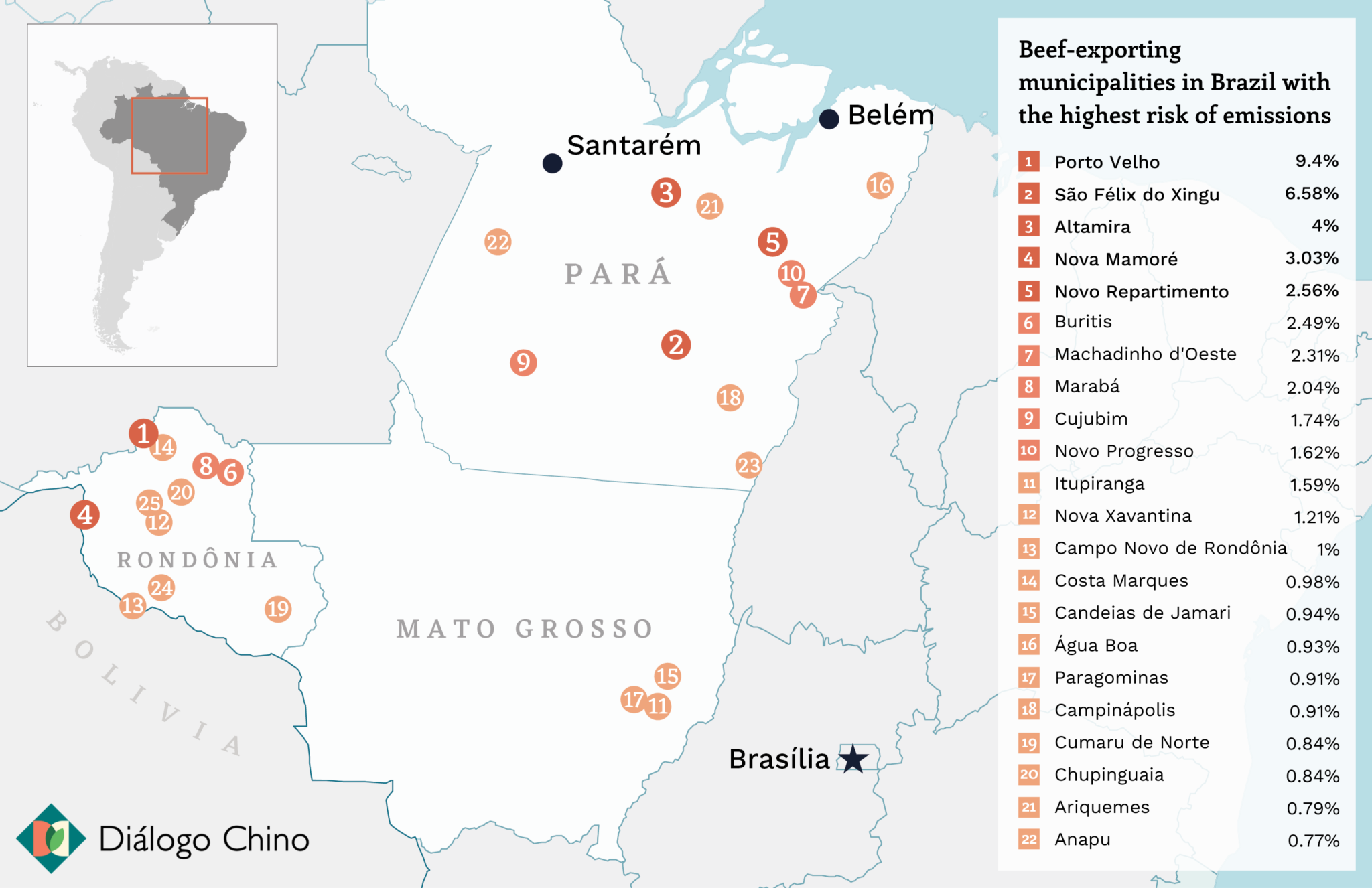 As a major beef importer, China risks being associating with illegal deforestation. Last year, the country approved 22 new meat processing plants for exports, 14 of which are in the Amazon region. This sensitive biome is home to 50% of the facilities authorised to sell to China. However, the approval process only focuses on sanitary standards, not environmental ones.

Pressure to approve new meatpacking plants has grown along with sales of Brazilian beef to China, especially following an outbreak of swine fever and changes in consumption habits in China. There has been a steep increase during the coronavirus outbreak: beef exports to mainland China and Hong Kong from January to May grew to 400,000 tonnes, up almost 50% on the previous year.

More than 70% of the meat shipped to China in 2017 was produced in the Amazon and Cerrado, which is also known as the Brazilian savanna. Today, clearing land for pasture is the main driver of deforestation in these biomes.

Trase, an initiative of the Stockholm Environment Institute and Global Canopy, has been mapping movement from when calves are born, to meatpacking plants, and finally the commodity’s export. The system cross-checks public data on Brazilian production to measure the exposure of markets such as China’s to social and environmental risks.

The data show that although China demands less meat from the Amazon than from other parts of the country, risks of CO2 emissions from this biome are higher because carbon-rich biomass is concentrated there. As a result, imports from the Amazon account for 61% of China’s emissions risk, compared to 24% from the Cerrado.

In total, China’s imports of Brazilian beef are linked to an emissions risk of 13.1 million tonnes of CO2 – equivalent to the electricity needed to power a few million homes for a year. As deforestation increases in the Amazon rainforest, a 10% to 20% increase in emissions is expected.

Half of China’s imports from Brazil come from the Cerrado, which is home to 5% of the planet’s biodiversity. At least 137 of its animal species are endangered. The biome holds the continent’s largest watersheds making it essential for the distribution of water in South America.

Despite its importance, the Cerrado has been neglected. Farmers are allowed to deforest up to 80% of their properties and only 11% of the region has some form of conservation protection. As a result, more than half of the area’s native forest has already been lost.

“This is where soy and cattle are expanding,” said Daniela Teston, who coordinates WWF-Brazil’s Collaboration for Forests and Agriculture initiative. “Legislation is not enough, which leads to the loss of native vegetation and biodiversity and threatens traditional communities, which are very present in this biome.”

Nearly half of the meat imported by China over the past year came from Brazil – a country that the Chinese government is increasingly relying upon to ensure food security for its population. But while environmental destruction in Brazil has featured on the political agenda in the US and Europe, China has remained relatively quiet.

The US government’s budgets and revenue committee demanded that President Donald Trump not negotiate with Jair Bolsonaro’s government, which “has shown complete disregard for basic human rights, the need to protect the Amazon rainforest, and workers’ rights and dignity”. In Europe, the Dutch parliament recently rejected the European Union’s trade agreement with Mercosur, also for social and environmental reasons.

Other production chains, like palm oil or fish, already have full traceability and are just as complex as meat

However, at a G7 Summit back in March, UK Prime Minister Boris Johnson claimed any EU threat to block the trade deal for environmental reasons interfered with free trade, earning him thanks from Bolsonaro’s government.

Nor has China threatened to suspend the beef trade because of deforestation. During last year’s fire season, the number two-ranking diplomat at the Chinese embassy in Brazil praised Brazilian environmental laws. At a press conference earlier this month, Chinese diplomats ignored Brazilian journalists’ attempts to elicit comments on deforestation in the Amazon.

Many Chinese also feel that the link between increased beef consumption and Amazon deforestation has received undue global attention given that per capita beef consumption in early industrialisers like the US and EU is higher.

At the company level, there has been some acknowledgement of the problem. A 2017 agreement mediated by WWF saw Chinese companies pledge to improve sustainability in beef production and trade. However, since then, progress has been slow and not very transparent. WWF’s China office stated that the agreement, which today has 80 Chinese signatories, has been developing guidelines for the sector and will implement them in pilot groups.

Exposure to deforestation risk is not only bad for the environment but makes it more likely that businesses will enter into trade agreements linked to criminal activity. Almost all the deforestation that took place in Amazonia last year was illegal.

The Brazilian beef industry is controlled by a few meatpacking companies. Although China imports beef from nearly one hundred companies, just three account for 61% of the trade. JBS, Marfrig, and Minerva Foods bear the most risk related to CO2 emissions caused by deforestation: 38%, 9%, and 6%, respectively. In 2019, the EU bought US$3 billion worth of beef from these three companies.

Responding to the Trase study, JBS claimed it “is superficial and can lead to errors of interpretation”; Minerva Foods emphasised that it contains “estimated data and does not state that supply was acquired from prohibited areas”, while Marfrig argued that all production from the Amazon involves risk, but added that the Trase data did not confirm a direct link between the company and deforestation.

Helen Bellfield, policy director at Trase and one of the study authors, admits that direct links are hard to establish but said that misses the point: to identify critical areas that require further investigation: “The goal is [to increase] transparency and identify areas where risks are concentrated… and require more focused due diligence”.

The three meat giants also stressed that they still audit their supply chains and ensure that illegal farms are banned. But they do admit that an obstacle exists to monitoring indirect suppliers, namely ranchers who are outside the formal production chain but sell their cattle to registered companies.

Globally, the beef industry has been slower to combat deforestation than some sectors. “Other production chains, like palm oil or fish, already have full traceability and are just as complex as meat,” said Daniela Teston. “In Brazil, technology is not the problem, but rather willingness in the political realm and in the private sector.”

The Brazilian government requires that an Animal Transport Permit (GTA) be issued every time animals are transferred from one property to another. This data could be used to track cattle from birth to slaughter to ensure that they do not come from deforested areas.

The GTA data is not made public but JBS, Minerva and environmentalists are demanding a solution from the government. The Ministry of Agriculture argues that the GTAs contain information that is private and protected by law. Meanwhile, JBS said it is discussing a Green GTA in order to advance monitoring. ABIEC, the association that represents meat exporting companies, did not wish to comment on responsibility for deforested areas.