In response, the European Union published a draft regulation in November 2021 designed to minimise Europe’s consumption of “deforestation-risk” products.

While legal NGO ClientEarth called the proposal a “leap forward in global environmental governance”, the governments of producer countries say it shifts the burden of ensuring that commodities are deforestation-free from wealthy consumers to poorer farmers.

Indonesia and Malaysia have called it part of a smear campaign against palm oil. Between them they produce 85% of the global total of the commodity. In a joint statement released a few months before the proposal, the nations’ leaders stated their intention to “continue to fight against palm oil discrimination”.

Both countries have lodged trade disputes with the World Trade Organisation (WTO), claiming the EU is trying to protect its own vegetable oil producers from international competition. They also cited the EU’s decision in 2018 to phase out, by 2030, the use of palm oil in transport fuel in Europe.

They are reportedly trying to hire an advocacy firm to run a campaign to change the perception of palm oil in Europe.

“Cleaning up the supply chain to the EU won’t necessarily help reduce global deforestation,” said Mardi Minangsari, the president of Kaoem Telapak, an Indonesian NGO that investigates deforestation. Recent research has suggested that banning imports of deforestation-risk commodities may have a much smaller effect on stemming forest loss than anticipated.

Nevertheless, addressing demand is important, said Minangsari, and must be done in a way that improves policies in producing countries. She holds that the EU’s proposal fails to recognise the difference between producer countries and sectors with weaker laws and those with more robust regulations, such as Indonesian timber and its EU FLEGT (Forest Law Enforcement, Governance and Trade) licence. Recognising these differences would incentivise countries to comply with the regulation, Minangsari said. Otherwise, exports will shift towards less-regulated countries, she added.

“Indonesia will not run out of demand for palm oil and has been looking to expand the market for its crude palm oil, including in China,” said Montty Girianna, the country’s deputy coordinating minister for energy and mineral resources. Girianna’s optimism is based on an announcement made back in 2019 by China’s Ministry of Commerce that it will remove tariffs on palm oil imports.

In fact, on 22 April, Indonesia shocked the international market by announcing it would ban all palm oil exports until further notice. The move is an attempt by the government to address ongoing domestic shortages of cooking oil and rising prices. 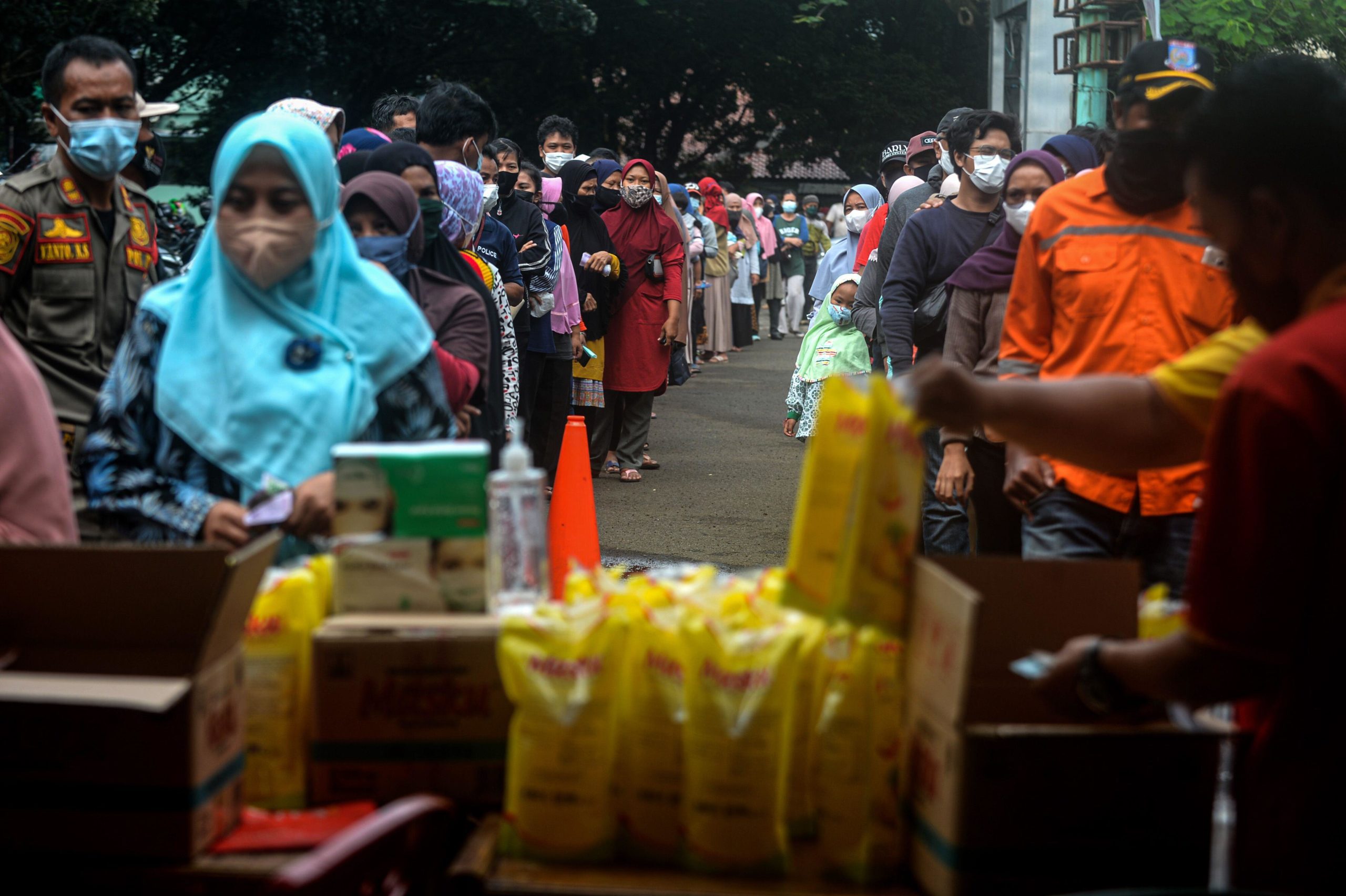 Indonesians in a suburb of Jakarta queue to buy subsidised cooking oil. To help tackle shortages in the country, the government last month banned exports of palm oil until further notice, a move expected to worsen food price inflation across the world. (Image: Agung Kuncahya B. / Alamy)

According to data from Trade Atlas, from 2019 to 2021 Indonesia exported 1.4 million tonnes of palm oil to China, double the amount in 2016–2018. China is the world’s second largest importer of palm oil.

“Indonesia’s response towards the EU proposal is worrying. We have seen that palm oil companies without NDPE commitments can sell their products to China,” Minangsari said.

NDPE stands for No Deforestation, No Peat, No Exploitation and represents a series of commitments made by palm oil producers to clean up production.

China-based importers are under growing pressure from consumers, brands and investors to source this risky commodity more sustainably, and are making efforts to do so.

In 2018, the China Sustainable Palm Oil Alliance (CSPOA) was launched, featuring big firms such as Mars Wrigley, L’Oréal, China National Cereals, Oils and Foodstuffs Corporation, Yihai Kerry, and SGS China. The companies made a joint commitment on promoting the adoption of sustainable palm oil in the Chinese market. The initial goal was to make sure that 10% of palm oil imports were certified as sustainably sourced by 2020, though this was not met.

ISPO certification is mandatory for palm oil companies operating in Indonesia, unlike the voluntary certifications available from the industry’s pioneering regulator, the Roundtable on Sustainable Palm Oil (RSPO).

However, the ISPO seems to have fallen even further short than the RSPO on protecting human rights and the environment. It has faced particular criticism for ignoring input from indigenous peoples and local communities affected by palm plantations.

According to an analysis by UK-based the Environmental Investigation Agency (EIA) and Indonesia-based Kaoem Telapak, the ISPO standard includes the right to consent for the indigenous peoples in a tokenistic manner, with palm oil companies required to tick a box saying they have consulted, without any subsequent verification. Moreover, secondary forest (which has regrown after being cut down) continues to be overlooked in the country as a natural landscape that warrants protection.

Minangsari says it is necessary to include in the ISPO standard the consent mechanism and ILO Convention 169 “if Indonesia wants to lead the market by example”.

Indonesia is yet to ratify ILO Convention 169, which recognises indigenous peoples’ right to self-determination within a nation-state, while setting standards for national governments regarding their wider rights, including the right to a land base.

Muhammad Arman shares a similar view. He is policy, law and human rights director of the Indigenous Peoples Alliance of the Archipelago (AMAN), which advocates for indigenous peoples in Indonesia.

“Without addressing the indigenous peoples’ rights over their ancestral domains, we will watch more palm oil estates’ expansion on unconsented indigenous territories, which is not in line with the spirit of the proposal to source responsible palm oil,” Arman said. 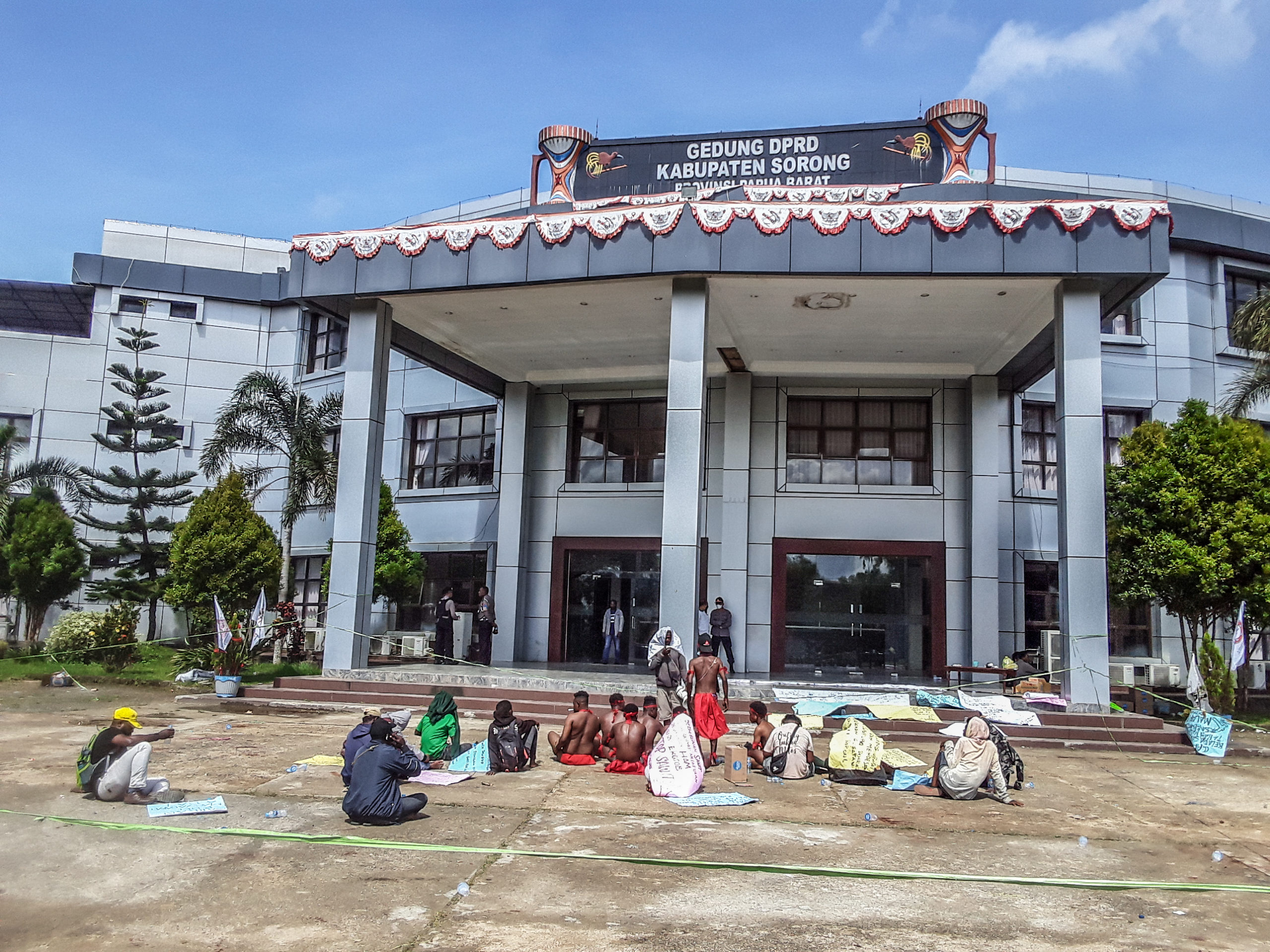 Protestors wait outside a West Papuan court in February 2021 during the trial of Johny Kamuru, head of Sorong Regency. Kamuru was being sued by palm oil companies after revoking their permits to plant on land claimed by indigenous groups. Moves like this to protect ancestral land against big agribusiness are rare in Indonesia. In this case, the court ruled in favour of Kamuru – a landmark victory for indigenous groups. But the companies are expected to continue their legal battle. (Image © Agustinus Kalalu / Pusaka Bentela Rakyat)

AMAN has been campaigning for an indigenous rights bill since 2013, which would provide recognition of the customary laws and land rights of indigenous communities across Indonesia. But the Indonesian parliament has been slow to act.

Passing the bill is urgent given the increased threats of violence and land grabbing against indigenous peoples since the Job Creation Bill was passed in 2020. That law was passed despite staunch criticism from Indonesian and international civil society.

The lack of provision for indigenous peoples undermines the credibility of ISPO certification. A 2017 report by Forest Peoples Programme ranking certification schemes for biofuels and edible oils put the ISPO at the very bottom.

The new ISPO standard, updated by a presidential regulation in 2020, may potentially instil greater confidence. In particular, monitoring of plantations by an independent third party is now mandatory. However, watchdog Kaoem Telapak believes the monitors may be tokenistic, as there is a lack of details on how complaints will be processed.

The rollout of ISPO certification itself has been slow according to Minangsari: “Only about 38% [of Indonesia’s oil palm acreage] is now certified,” meaning the ISPO is still failing to meet the target it set to certify all palm oil companies by 2014.

The ISPO’s struggle to impose its authority is linked to the fact that, according to Greenpeace, a fifth of the oil palm plantation area in Indonesia lies in protected forests. In addition, it’s difficult to trace the supply chain from upstream to downstream industries and link the plantations with companies that own processing facilities or refineries. Joint research by Trase, the Auriga Foundation and Santa Barbara University found the ownership of more than half of Indonesia’s palm oil plantations to be unclear.

“The Indonesian government needs to step up its game and be bold,” said Timer Manurung, the executive director of Auriga Foundation. “Brave initiatives to revoke the licences of illegal palm oil estates are still rare and still threatened by hit back from these companies.”

He believes that exercising and imposing administrative sanctions on palm oil companies, including by revoking licences for errors or violations, will boost Indonesian efforts to fight deforestation and combat the climate crisis, as well as benefit the country’s palm oil in the global market.

As war drives up the price of palm oil, is sustainable production at risk?

Will China produce its own palm oil?