In early October, the south-eastern United States was hit by Hurricane Matthew, the strongest Atlantic storm for a decade, leaving 44 dead. The winds and associated floods also struck local industrial animal farms, killing many thousands of animals and inundating the lagoons where the animals’ manure is stored.

The environmental and financial costs are still being assessed. As the changing climate brings more extreme weather events such as this, the vulnerability of concentrated animal farming as an industrial model has again been exposed for governments, businesses, investors, farmers and consumers to rethink.

North Carolina is the second largest animal farming state in the US. According to statistics from the local branch of the Waterkeeper Alliance, an international non-governmental organisation working to protect clean water, North Carolina has more than 6,500 concentrated animal feeding operations (CAFOs) that produce at least 15 million pigs a year, and along with them, enough manure to fill 410 standard swimming pools every day.

Farming is more intensive in the county of Duplin, in eastern North Carolina, than anywhere else in the world – 18.5 million animals are crammed inside CAFOs, including 2.3 million pigs. The farmed animal-human population ratio here is as high as 40:1. Pork produced in North Carolina is exported to a number of countries, including China.

The floods caused by hurricane Mathew in North Carolina killed 1.7 million chickens, 112,000 turkeys and 2,800 pigs, as of October 25, according to a state Department of Agriculture and Consumer Services official. Rick Dove, one of the founders of the Waterkeeper Alliance, has spent weeks documenting the devastation from the air. He photographed more than a dozen flooded pig CAFOs and estimates that tens of thousands of pigs could have drowned in those facilities. 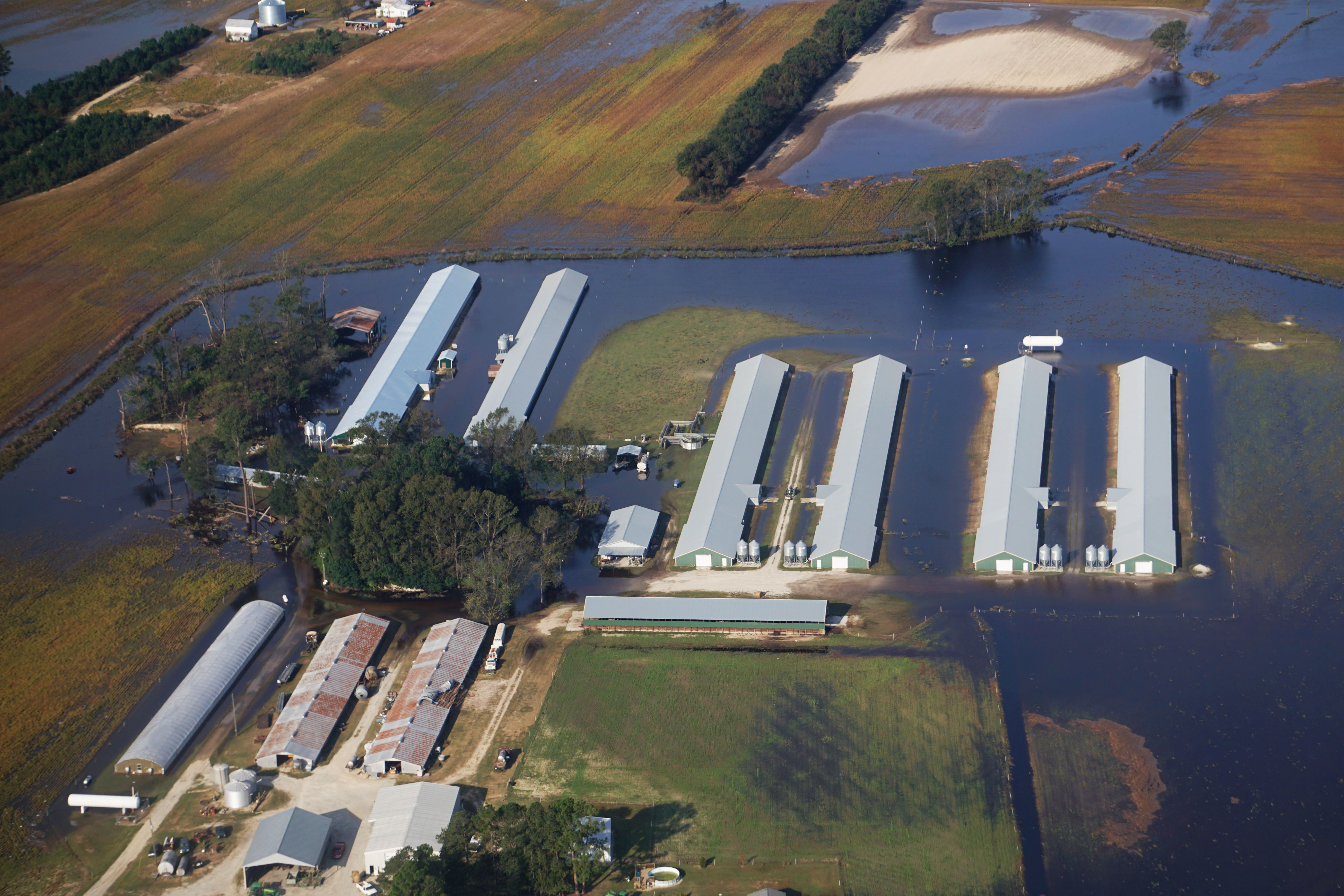 When Hurricane Floyd hit the east coast of the United States in 1999 it triggered the third largest evacuation in the history of the US. Hoping to reduce their losses, farmers drove their livestock out of the sheds, but most still drowned, resulting in numerous carcasses floating in the floodwaters.

On October 15, volunteers from our WeChat group What’s for Dinner (named after our landmark documentary about the environmental impact of the meat industry in China) flew over the scene with local activists, but saw no escaped animals or floating carcasses. Most of the animals drowned in their barns, according to the official from the Department of Agricultural and Consumer Services.

Rick Dove said he thought the farmers were moving the animals’ carcasses at night to minimise media exposure. Local family farmer Genell Pridgen told the volunteers that the CAFO farmers were discussing how best to deal with the huge number of carcasses; as the waters recede, the pigs might have to be buried on a massive scale, while farmers are trying to compost the dead chickens right inside the barns.

North Carolina has long-struggled with issues arising from industrial animal farming. Effluent from the animal waste lagoons is sprayed onto nearby pastures, as “fertiliser”. But with no regulations mandating buffer zones between the facilities and homes when CAFOs were first built, toxic spray from the lagoons often lands on the houses and front yards of local residents, spreading contamination. The wastes are then carried into the rivers by the rain, polluting sources of drinking water and, in summer, causing algal blooms and massive fish kills.

Residents whose homes are near CAFOs live their everyday lives with a constant stench and swarming insects. This means that even when the weather is nice, they often have to keep their windows closed and stay indoors. The air pollution from CAFOs also leads to health problems, such as respiratory diseases, headaches, sore eyes and nausea. These conditions disproportionately affect low-income communities (mostly African-American and Hispanic) – a matter of environmental injustice.

Local environmental groups and residents have repeatedly emphasised that clean waste treatment  technologies exist and have been successfully demonstrated in North Carolina. But the meat-packing companies have refused to upgrade the systems with their contract farmers, complaining it is too costly to do so.

Rick Dove points out that the flood plains of eastern North Carolina, are naturally vulnerable to floods. These are expected to increase in both frequency and severity, so waste water treatment systems should be designed and constructed to prevent leaks. But even after Hurricane Floyd rang the alarm bell by causing six lagoons to breach and 50 lagoons to be inundated, the floods this year still caused a dozen lagoons to overflow, contaminating large areas.

The floodwaters have now receded. However, many flooded lagoons are still full, with no capacity to handle new manure from the surviving animals. These farms may – as the industry did after Hurricane Floyd – spray the waste (or so-called “fertiliser”) at a higher intensity, far beyond what the pastures can absorb. As a result, the animals’ waste  with further pollute rivers and groundwater.

In 2013, the WH Group (formerly the Shuanghui Group) from China acquired Smithfield, the largest pork producer in the United States, and began to increase pork imports from places like North Carolina. For these Chinese newcomers, the realities of intensive animal farming in North Carolina may be a wake-up call. As Rick Dove says, “no matter how the meat is produced and by whom, the people and the environment shouldn’t suffer.”

Is industrial farming a tech-fix or dead end for tackling climate change?

Should China replicate the US factory farming model?