China’s central government policy of subsidising diesel fuel for its fishing fleet has created a damaging industry that is growing fast despite being commercially unsustainable, according to environmental campaign group Greenpeace.

Describing China’s distant water fishing industry (DWF) as “out of control”, Greenpeace said in an 8 August report that the country’s fleet of 2,460 vessels is likely to keep on expanding as long as “China continues to pour in misguided subsidies,” of which fuel subsidies are “by far the most important.”

China is the world’s largest producer of wild catch, and of seafood, according to fisheries and international relations expert Tabitha Grace Mallory of Seattle-based think tank, The National Bureau of Asian Research.

China is far from being the only nation to subsidise distant water fleets. But it has the world’s largest fleet, and one that is growing rapidly.

Chinese fishing fleets receive a variety of subsidies but the central government’s fuel subsidy is the most significant. The report quotes research by Everbright Securities that found fuel subsidies make up on average 80% of non-operational income for China’s distant water fishing fleets (DWF).

Without it, there would be no profits at the two major state-owned fisheries firms analysed by Everbright, CNFC China Overseas Fisheries and Shanghai Kaichuan Marine International.

The same is true for private companies. “When the catch isn’t great, the subsidies make up the major part of your income,” Mr Zheng, a boat owner and deep sea fisherman for 30 years, told chinadialogue. A large vessel could get 4 to 5 million yuan (US$600,000 to US$750,000) in subsidies, while smaller vessels might receive 1 million yuan, he said.

Zheng fishes from Zhoushan in Zhejiang province, southeastern China. The country’s largest fishery is offshore, and the port is also a national centre for the distant sea fishing fleet, a term for boats that fish the deep sea and in other countries’ waters.

Li Shuo, author of the Greenpeace report, said subsidies are not strengthening the industry and using taxpayer’s money to prop up unprofitable businesses makes no sense.

Furthermore, the number of deep sea fishing vessels is far above what the environment can cope with. The industry is caught up in a cycle of low profitability leading to high subsidies, which again leads to lower profitability, he said. 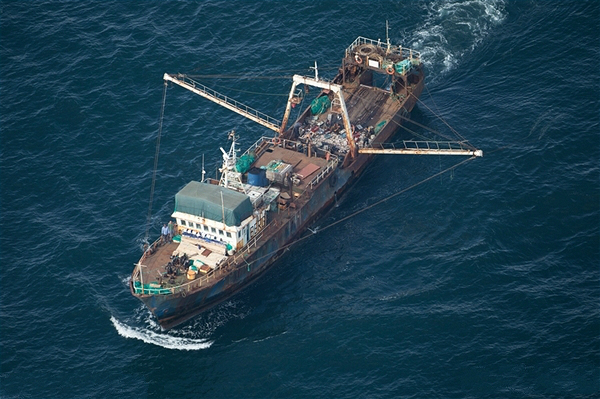 A Chinese fishing vessel found be Greeenpeace to be illegally operating in Guinea-Bissau waters, 14 November 2014. (Image by Giri Rezac / Greenpeace)

Total payments have risen almost 10 times from 281 million yuan (US$42.2 million) at the outset in 2006 to a huge 2.68 billion yuan in 2011, when official data stopped being published, says Greenpeace. Mallory has estimated the cost at US$6.5 billion in 2013, in recent research published in the journal Marine Policy.

The giddying increases are due to the growing number of boats, up more than 25% in two years from 2012 to 2014. Two thirds of new launches were in Fujian and Shandong provinces in eastern China, where local government subsidies create extra incentives, and more expansion is planned. “Everyone knows fisheries are shrinking overall, yet the number of deep sea fishing vessels is increasing,” said fisherman Zheng.

Mid-summer is the closed season offshore of Zhejiang, yet the harbour is busy with boats landing catches from the Pacific, Atlantic and Indian oceans. 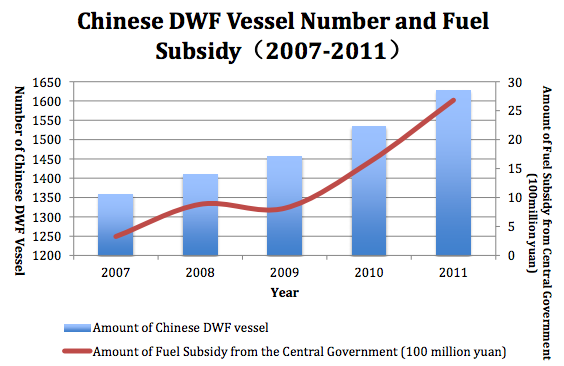 The policy was confirmed in a State Council 2008 ruling protecting fishermen, grain farmers and those on low incomes.

The December 2015 Paris Agreement on climate change included national pledges to curb greenhouse gas emissions, and “elimination of inefficient fossil fuel subsidies” was a hot topic at the G7 summit in May 2016 and G20 energy ministers meeting in June.

“Fuel subsides are a subsidy of fossil fuels, and that means it’s an environmental protection and climate change issue,” says Li, suggesting subsidies should be replaced gradually, while taking into account the reasonable needs of vulnerable groups.

With ocean ecosystems declining, international pressure is growing to take their protection more seriously. Bian Yongmin, a professor at the School of Law at the University of International Business and Economics in Beijing, has said it is not a question of whether changes are needed – it’s a question of what changes and when.

China’s government is also sending supportive signals. In 2015 the Ministry of Finance and Ministry of Agriculture issued a notice on changing policy on subsidies, noting that since 2006 fisheries diesel subsidies have distorted pricing and conflict with a policy of reducing boat numbers and shifting fishermen into other sectors.

New regulations will decouple payments from the amount of fuel used, and savings will help workers find other jobs and the development of sport and sustainable fishing, the ministry says.

The latest policy target is to see at least a 20% drop in ocean catches by 2020. “Reducing the number of vessels, moving workers into other sectors, and gradually doing away with diesel subsidies are all complementary to sustainable development of the fishing industry” said Fan Xubing, chief marketing consultant for the China Aquatic Products Processing and Marketing Alliance. “It’s a very complex issue, and all the different policies need to be in line with each other.”