On early winter mornings the Ou River is hidden in mist. If you had never been there before, you may not sense the presence of tall karst mountains looming overhead. The water laps quietly against our fishing boat. We are the only ones out on this ghostly still morning. Swiftlets fly overhead, swooping down to catch the water bugs that skim along the river’s surface.

I first visited Mat Bri village in northern Laos nearly ten years ago. The name means “sun” or “eye of the forest” in our Khmu indigenous language. As I entered the village leader’s woven bamboo home, children peeped through the windows and doors, curious to catch a glimpse of the new visitor.

The leader asked my clan name, and when I said Tamong, his wife Sim Aom’s face lit up. The Tamong is a kind of civet, a small nocturnal mammal, and it gives its name to the largest Khmu clan in Laos. “I will care for you as my own grandchild,” auntie Sim Aom said. “You will stay in my home. If you should die along the way, your spirit will remain in the care of our clan.” She and I were instant friends.

The next morning, auntie Sim Aom invited me to join the neighbouring women and their children on a trip to collect khai, or riverweed. Together, we walked down a steep hill through the community’s riverbank gardens to the shore of the Ou River. The women had waited until late morning for the sunshine to warm the water’s surface and burn off the mist. We waded into the chilly water, past the community bathing area, and stopped waist-high in the river, which shone a brilliant green. Long branches of riverweed waved below the surface.

“Don’t wander off on your own,” auntie Sim Aom instructed. “Stay together and form a line to avoid stepping on the khai.” We moved slowly upstream, chatting as we gathered the weed into woven baskets. “Last year the khai didn’t grow, and I worried that I’d never see it again. But this year I’m so glad to see it again.”

“The village leader warned us not to eat it because it’s contaminated from the construction of the Chinese dam upstream,” said auntie Sim Aom’s neighbour Bee. “Is that true? Will the chemicals accumulate in our bodies? How can we not eat khai?”

“Don’t worry,” said her daughter Lai. “I tried it, and it was okay. Our neighbours ate it, and they didn’t die.”

“Let’s wash it really well and soak it in salt to get the chemicals off,” suggested Sim Aom’s daughter-in-law Nang. “Then we can eat it.”

“Who says salt can wash off chemicals?” I asked.

“No-one, I just think it should work.”

I held my camera close to the surface of the water, aiming at a blue kingfisher sunning itself on the branches of a partially submerged tree. “Wait for me!” I called. The women had moved far upstream, against the current. Young and old, their hands worked quickly, chatting and laughing as they pulled up huge fistfuls of riverweed. 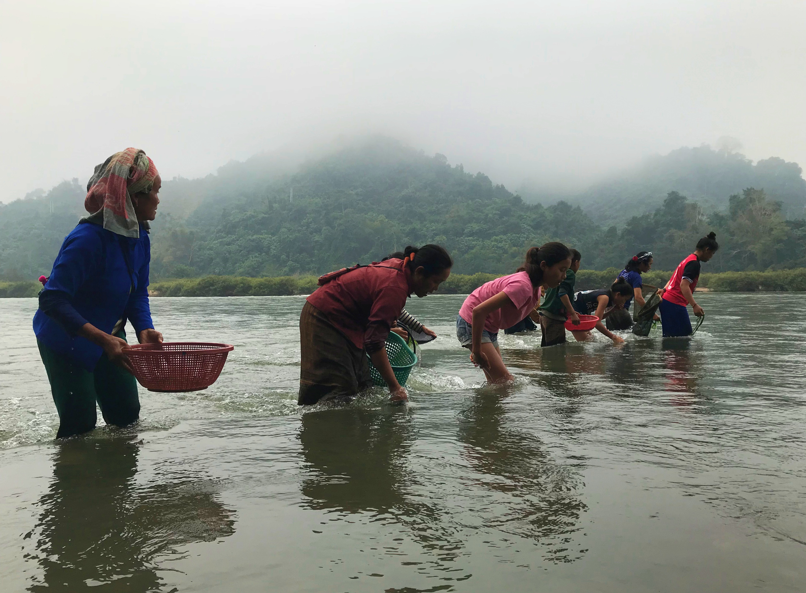 Fishing for riverweed in the Ou River. (Image by the author)

“What will we do if one day the khai doesn’t come back?” Lai asked. “We are always together during this season. We forget our tiredness. We forget the cold. It’s so much fun wading through the river and recalling our childhood. It’s always just us women; no men.”

“If the men came, it would be even more fun!” Auntie Sim Aom laughed.

“I invited my husband once,” Lai said, “but he said it was women’s work, and went off hunting wild boar in the forest.”

“I never once invited my husband,” said Nang. “Fishing and collecting khai with women is more fun. I’m sick of seeing my husband’s face every day!”

Auntie Sim Aom lifted a large rock from the riverbed for me to see. “Look, this is how khai grows.”

We made our way slowly past several small islands covered in bushes, home to an endless variety of birds. The water below was especially clear, the bright green riverweed visible just under the surface.

Lai brought me a large handful of khai, glistening with tiny shrimp and fish. “When fish lay eggs in the khai, the mother stays there guarding the eggs, swimming around the khai in circles until they hatch.”

“Yes,” Lai said. “Khai beds are prime fish spawning grounds.” Lai used her sawing – a hand-held net woven around a bamboo frame – to capture the fish and shrimp living amidst the khai.

“Khai is easy to find, and close to home. What else would we have to eat in this season if not for khai?” Asked Auntie Sim Aom. “Before the dam construction began, the khai would appear each cool season. But once they began blocking the river, it hasn’t gown back as usual.”

Riverweed blooms from December to February, before it dies and washes away. Then it blooms again in March. The second crop is greener, has a slimier texture, and is the most delicious. There is little to no khai left in the Mekong because of the dams blocking the river’s main channel. It now grows mainly on Mekong tributaries such as the Ou River, and in small mountain streams.

That evening, auntie Sim Aom prepared mok khai. She carefully cleaned the riverweed, tore it into small pieces and mixed it with chopped chillies, dill, shallots, ginger and garlic. Finally, she added small fish, river oysters and salt, then wrapped the mixture in banana leaves and smoked it in the ashes of her cooking fire. I joined her family around a woven mat, enjoying the meal with freshly steamed sticky rice. It was absolutely delicious!

The next day, auntie Sim Aom and her neighbours set the remaining khai out in baskets to dry in the sun. Kept in a tight plastic bag, the dried riverweed, called khai phaen, can be kept for up to a year, to be roasted over the fire before eating.

Recently, khai has become a rare source of income for this traditionally subsistence community. With little riverweed left in the Mekong, merchants travelling the jungle paths along the Ou discovered an abundance of good quality khai still available in the clear, deep waters surrounding Mat Bri village.

Every family in the community now sells fresh khai to middlemen by the boatload, destined for the tourist town of Luang Prabang. A few enterprising families have begun to earn more money producing dried riverweed, bringing in a significant income of 2-5 million kip (US$230-$580) per month per household. This is quite a new phenomenon, as we Khmu don’t have a culture of buying and selling. Traditionally we only barter with outsiders. 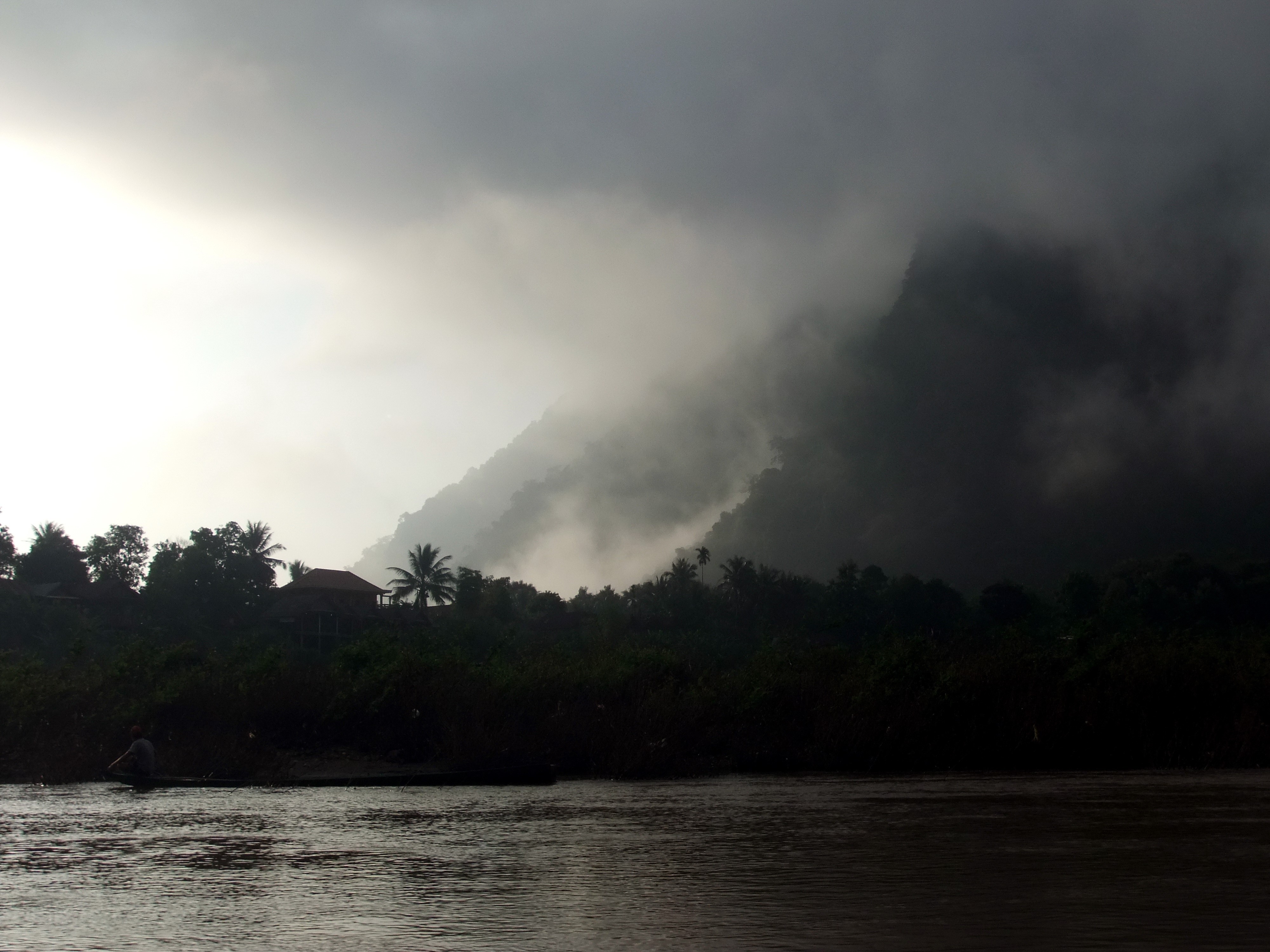 Karst mountains looming over the Ou River. (Image by the author)

Under the shadow of dams

The Ou spans 450 kilometres, flowing from the mountains in northern Laos near the Chinese border to meet the waters of the mainstream Mekong. The development of the seven-dam cascade by China’s Sinohydro Corporation has brought fundamental changes to the river system and surrounding communities.

The Chinese enterprise has secured the rights for planning and development across the entire Ou River basin, and the project is seen as one of Laos’s key contributions to China’s Belt and Road Initiative.

Given the enormity of the project, Sinohydro has divided the 10-year construction period into two phases. The first was officially completed in May of 2016 and consists of the Nam Ou 2, 5 and 6 dams in Phongsaly province. The second phase includes the Nam Ou 1, 3, 4 and 7 dams in Luang Prabang province. Altogether the dams are expected to displace 89 villages and thousands of people.

The Nam Ou 3 was completed in November 2017, resulting in the permanent closure of navigation on the Ou between the towns of Nong Khiaw and Muang Khua, north of Luang Prabang. The closing of this popular and stunning section of waterway has resulted in a loss of income for boat drivers and tour operators. Work on the second phase is projected to be complete in 2020.

With the exception of Nam Ou 2, environmental impact assessments of the other six dams and resettlement action plans for affected communities have not been released publicly, as required by Lao law. Sinohydro’s own environmental policy, which restricts the company from being involved in hydropower developments in national parks, is also being violated due to the planned inundation of sections of the Phou Den Din National Protected Area.

When I returned to Mat Bri village a year later, Nam Ou 3, the third in a cascade of seven hydropower dams being built on the Ou, had closed its gates, cutting off this section of the river from boat traffic.

The khai bloomed only briefly, turning a sickly yellow colour before floating away on the current. Riverweed needs sunlight and oxygen and won’t grow if the water is too deep or cloudy. The water level can be unusually high one day and drop low the next because of the operation of the dam sluice gates. This means the women of Mat Bri now return home empty-handed. “I look out at the river and miss the old days,” sighed auntie Sim Aom.

Saimok is the author's pen name