“You dream about avocado but in China it is not easy to find,” says Camila Kemeny, a Chilean English teacher who lives in Hefei, a city in south-east China. “Lately I’ve been seeing more avocados, so I’m happy — I’m always looking for them like crazy,” she adds.

In recent years, imports of “butter fruit”, as it is known in China, have risen fast. Almost all come from Latin America. In 2017, China imported more than 32,000 tonnes of avocado, 22% more than in the previous year. However, in Mexico, Chile and Peru the surge in exports has been accompanied by conflict over water resources and deforestation, which is creating environmental concern. 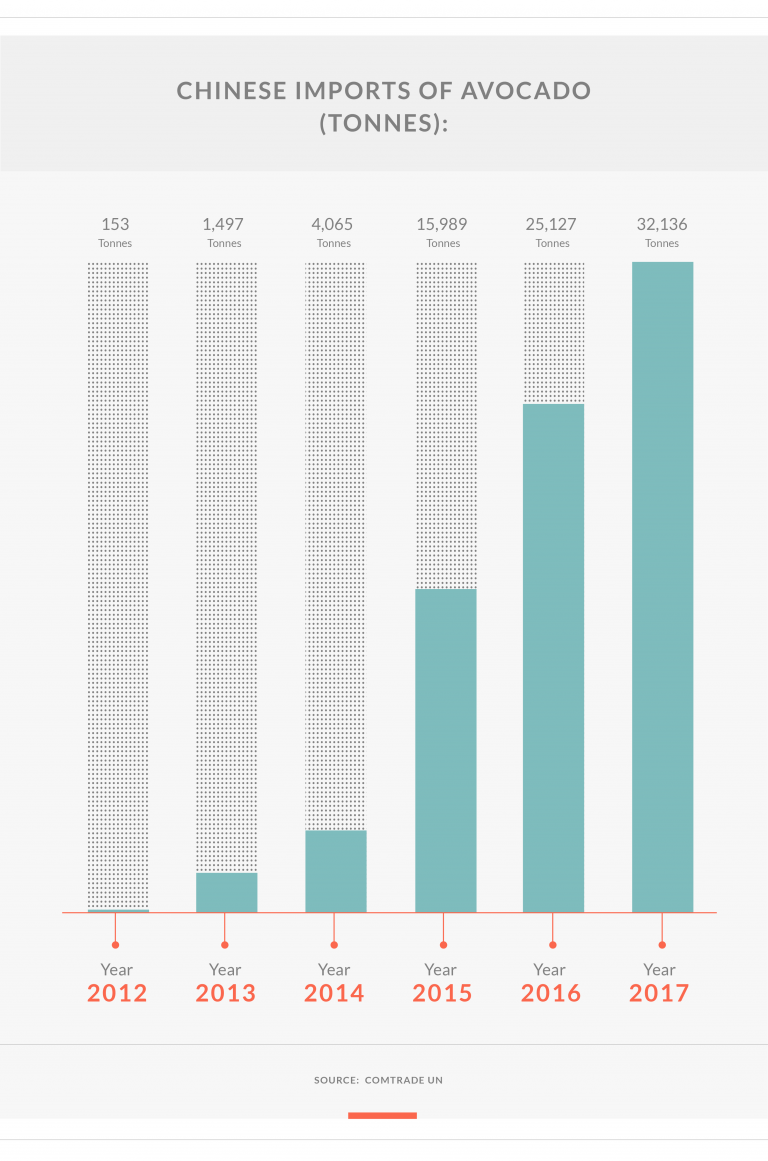 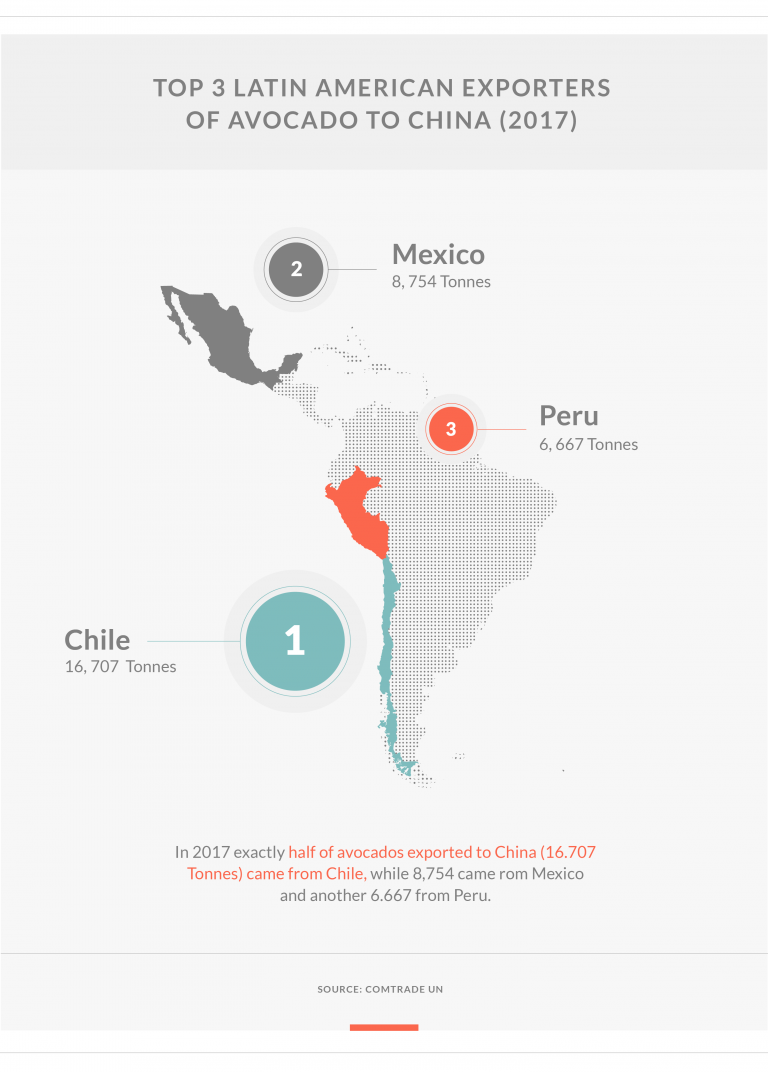 Exactly half of China’s avocado imports (16,707 tonnes) last year came from Chile; 8,754 tonnes from Mexico; and 6,667 from Peru, according to UN Comtrade data. All three countries enjoy favourable trade terms with China. Chile and Peru have free trade agreements with Beijing and do not pay export tariffs. Mexico, which accounts for around half of global avocado supply, benefits from being geographically closer to China than its competitors, meaning transport costs are lower.

Shanghai, Beijing and Guangzhou account for the largest share of China's avocado demand, according to Ramón Paz, a spokesperson for the Mexican Avocado Producers and Packers Association (APEAM). Paz attributes the popularity of the fruit to Chinese who have travelled abroad and to tourists introducing new culinary habits.

“People were not accustomed to them at first, they thought they were just used for salad and sushi, but now they are more used to eating them and use them in their cooking or eat them for breakfast – like avocado on toast,” says a stallholder at Beijing’s Sanyuanli market. Ten year's ago, avocado was practically unknown in China.

With supposed health benefits, demand for the golden-green fruit is rising the world over. A restaurant in the Netherlands even sells hamburgers sandwiched in avocado instead of bread.

In 2017, news channel CGTN broadcast a special feature called “China’s avocado craze: a ‘superfood’ marketing success story”. The report argued that the arrival of the fruit was driven by promotional campaigns hailing its positive effects on the heart and skin, and a desire to capitalise on its appeal in the West.

Latin American entrepreneurs have created industry associations, such as the Hass Avocado Committee in Chile and the Mexican APEAM, which have taken campaigns to China. The Mexican consulate sponsored a food festival in Guangzhou and Sanya (on Hainan Island) in 2015 to promote Mexican food and tourism.

“China is a huge market. As people become aware of the fruits we export and introduce as part of their diet, consumption will increase,” Roxana Quirarte Murguia, a consultant at Mexico Food Connection told China Daily.

Major companies have signed agreements to promote large-scale distribution. US-based Mission Produce; Lantao, the main importer of avocados to China; and distributor Pagoda, signed a cooperation agreement creating the brand Mr Avocado. The merged company distributes boxes in large supermarkets with tags that explain how to cut and prepare the fruit, with recipes for Chinese New Year.

The increase in exports to China helps Latin American economies and generate jobs but the environmental consequences have raised concern. Avocados require a lot of water to obtain their silky texture, and the acreage needed to meet demand has put pressure on land. According to Mexico’s National Institute for Forestry, Farming and Fisheries Research, 2,000 litres of water are needed to produce a kilo of avocados, four times the amount needed for the same weight of oranges, 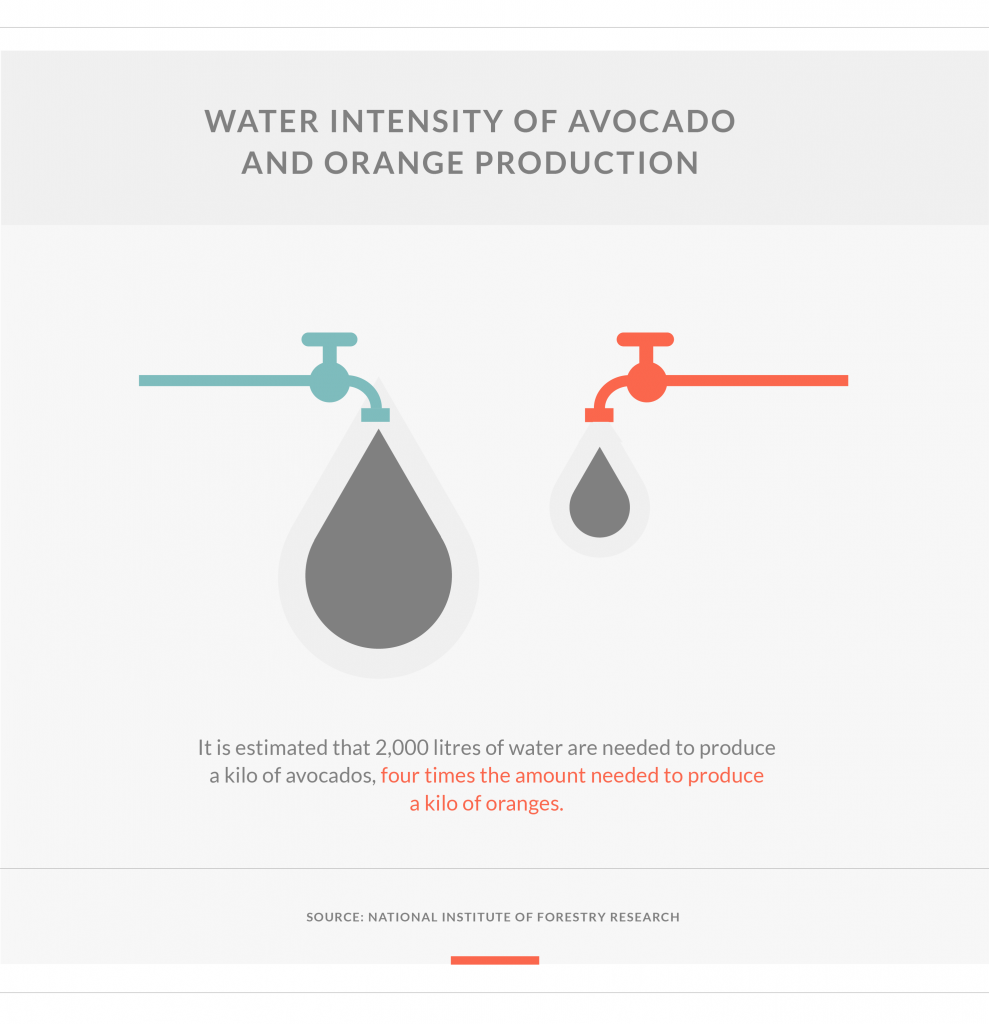 In Chile, the most serious problem is water. In the central avocado-producing province of Petorca rivers have dried up.

Rodrigo Mundaca, an activist and spokesperson for Modatima, the Defense Movement for Access to Water, Land and Environmental Protection, has blamed agribusiness for the lack of water in surrounding communities.

Local farmers told an investigation by The Guardian that people are getting sick from the drought and must choose between cooking or washing, and going to the bathroom in holes or in plastic bags. All the while, big agri-businesses earn more and more.

Climate change is adding to the competition for scarce resources.

“In general, it has rained less in the last ten years and there are big irrigation problems,” explained Alex Martín, a Chilean avocado farmer for more than 20 years.

In Michoacán state, which produces the majority of Mexico’s avocados, the crop has been accused of contributing to deforestation. According to Greenpeace, forests are disappearing because they can’t compete with the avocado business and there is a lack of regulation to establish forest conservation areas.

Even before the boom, the area set aside for avocado production grew from 31,000 hectares in 1980 to more than 106,000 hectares in 2009, according to the Secretariat of Agriculture, Livestock, Rural Development, Fisheries and Food (Sagarpa), a Mexican government body.

Between 1976 and 2005, 20,000 hectares of forest were lost in the municipalities of Charapan, Cherán, Los Reyes, Nahuatzen, Nuevo San Juan Parangaricutiro, Paracho, Peribán, Tancítaro, Tingambato, Uruapan and Ziracuaretiro. Between 2000 to 2005, forest loss is estimated to be 509 hectares per year. 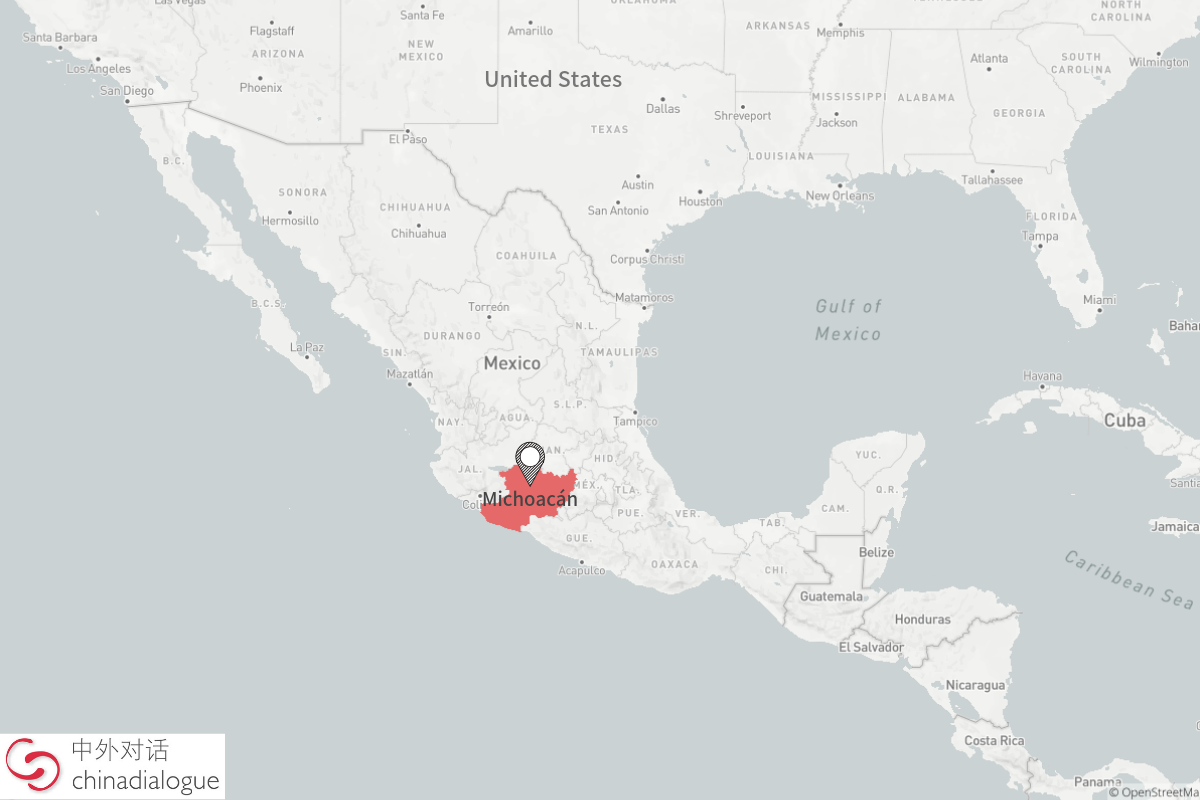 Beyond environmental problems, the avocado has even become a focus for organised crime in Michoacán. Cartels control large swathes of the business and encourage illegal planting.

Colombia is also seeking to export to China. At present, Colombia does not have permission to trade avocados on the Chinese market. However, the dramatic growth of consumption has alerted the authorities to its earning potential. Former minister of agriculture, Juan Guillermo Zuluaga, made a point of it when visiting Beijing last May to meet his Chinese counterpart Han Changfu.

The Colombian Ministry of Foreign Trade say the avocado business could have a positive impact on regions badly hit by years of conflict with guerrillas and other illegal armed groups. Avocado production in the regions of Antioquia, Caldas, Cauca, Quindío, Risaralda, Tolima and Valle del Cauca is on the rise. It could improve living conditions for thousands of people hoping for new opportunities in the period following the signing of the 2016 peace agreement.

“Colombia currently depends in part on the European market and we need market diversification,” explains Ricardo Uribe, an entrepreneur who has been in the avocado business in Colombia for more than 19 years. He plays down the risk that environmental problems seen elsewhere in Latin America would occur in the country.

“The Chinese market has features that do not compare to Europe, and Colombia has access to the Pacific Ocean to reach Asia, so it could be very good for the country.”

Crucial agreement with China could save Mozambique’s forests