It’s not yet 6am but already the lights aboard a fishing vessel in the harbour of Huangsha, a village in Zhejiang province on China’s eastern coast, are on. Huang Zhongjiao, 61, is up early. After tidying up a little he makes breakfast for himself and his shipmate, Lin Taidao, 64.

The boat, formerly used for commercial fishing, has been renamed to reflect its new function, to provide “recreational fishing” trips for tourists.

There are six of these boats in the harbour at Huangsha, all owned by Fishingland. Tour groups book a vessel for a day. They then sail five kilometres offshore, where they watch two crew members catch fish while another steers. The tourists get a close-up fishing experience and a few fish to take home at the end.

“Our busy period is from May to October, that’s when we get the most clients. So far, we’ve taken 20,000 people out this year,” says Zheng Mingbo, head of the company, which was founded in 2015.

Huangsha is a typical fishing village. At its peak it was home to more than 20 fishing vessels. But with the consolidation of China’s fleet that number has shrunk to ten. Many fishermen are back on dry land working different jobs. Fishingland’s 18 employees are all retired fishermen with at least 30 years of experience.

Last year, China’s yearly moratorium on coastal fishing (when fish stocks are allowed time to recover)  was extended by a month. From May 1, 2017, to September 16, fishing was forbidden in the East China Sea a month earlier than usual. According to Zhejiang’s fishermen, this was the “toughest ever” closed season.

In the past, the closed season is a chance for fishermen to rest while their boats stay in port. But tourist trips are permitted, provided they take place at set times and locations, use regulation fishing equipment, and respect catch limits.

“When the company started we took on these 18 fishermen, both answering the government’s call to find fishermen alternative work and getting hugely experienced employees for our firm. For them, many uncertainties associated with fishing are removed; their income is the same regardless of the size of the catch and the work is much safer,” explains Zheng Mingbo.

Wang and his shipmates have gone from relying on the vagaries of the sea to being salaried employees working to a regular schedule.

Wang is positive about the change:

“In the past it was normal to be away from home for a month. It’s different work now but I can be sure I’ll get home each night and the days are a lot calmer.”

Shifting fishermen to other work is an important part of Zhejiang’s efforts to help fisheries recover in the East China Sea.

The 220,000-square kilometre Zhejiang East China Sea fishery was once famous as China’s richest. It once produced the country’s largest catches but the marine environment has been degraded, mainly due to overfishing.

The provincial fishery authorities found the number of unregistered vessels peaked at 13,000 in 2013. While the East China Sea fishery’s maximum sustainable yield (approximately two million tonnes a year) was being exceeded by over one million tonnes. In 2017, the province capped the yield at 2.57 million tonnes, or 23% less than the total catch for 2016.

With its fishing industry in a slump, Zhejiang had no choice but to crackdown on illegal vessels. In 2014, it tackled use of small-mesh nets that were catching baby and juvenile fish as well as adults. By September 2015, a year later, almost all illegal fishing vessels had been confiscated, according to the authorities.

In 2016, Zhejiang began reducing the number of legal fishing vessels, too. To reduce the intensity of fishing to more sustainable levels, the number of vessels would need to fall from over 20,000 to just 2,580 by 2020, with alternative employment found for those affected. The first ships to be taken out of service were large capacity vessels, trawlers that damage the sea floor, and older, wooden vessels.

These two measures have brought rapid change to many traditional fishing towns. In places such as Zhoushan, Ningbo, Wenzhou and Taizhou, it has created a new problem: what happens to the fishermen who can no longer fish?

One solution has been the launch of tourist fishing experiences. According to the Ministry of Agriculture’s fishery administration, there were 103 “demonstration” recreational fishing sites in Zhejiang.

“The fishing authorities have provided retraining for fishermen. Most people have gone into business for themselves while others have shifted to vessels working further offshore. Others have gone into fishing tourism, with the government providing some support. Fishingland is a typical example,” explained a fisheries official from Zhoushan.

Local governments in Zhejiang have also been providing welfare payments for those who have reached retirement age but have no pensions. But, like the manufacturing sector, in other coastal provinces, Zhejiang’s fishing industry has attracted many workers from elsewhere. Benefits such as pension provision only apply to those with local household registration documents, meaning middle-aged and elderly fishermen who moved from elsewhere in China receive nothing.

“Fewer and fewer [local] young folk are working in coastal fishing. In Zhoushan 30% of fishermen aren’t local. It’s mostly fishermen in their 50s and 60s that are being shifted to other jobs, but they’ve been fishermen all their lives, some of them don’t speak Mandarin well. Finding livelihoods for these people is key to our work,” said the fisheries official. 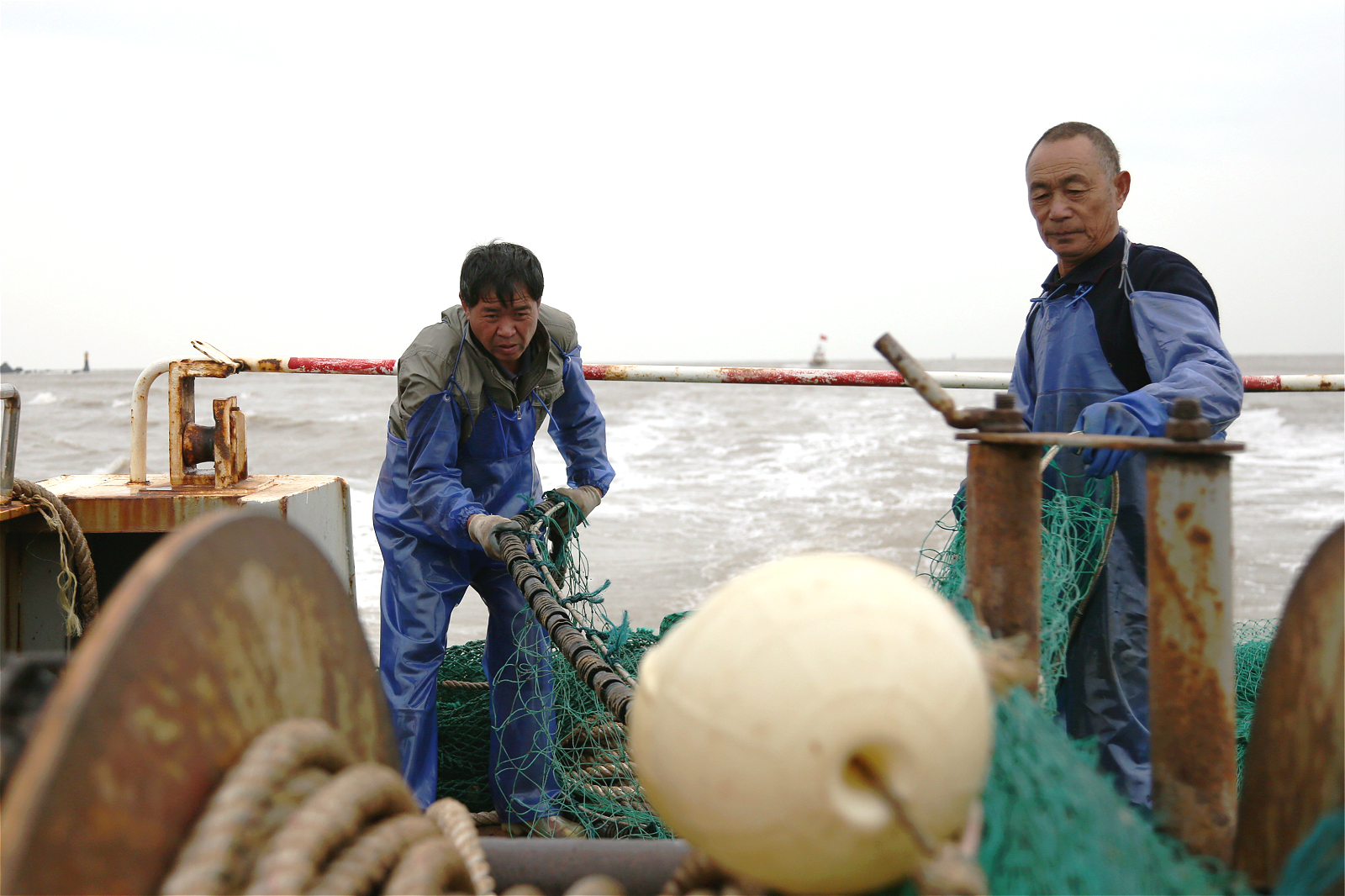 Fishermen Wang Zhongjiao and Lin Taidao tidy up their finishing gear as they return from the sea. 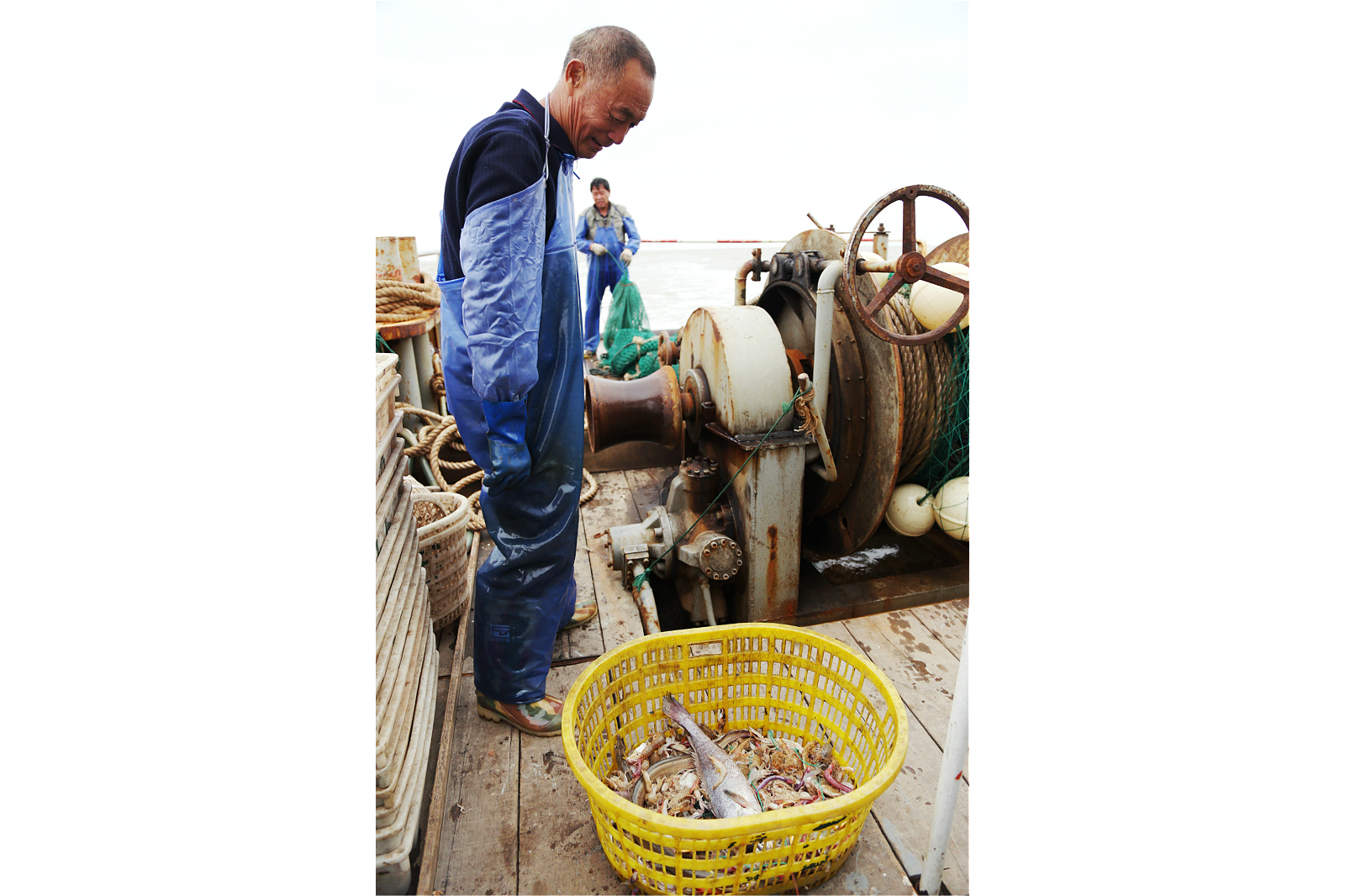 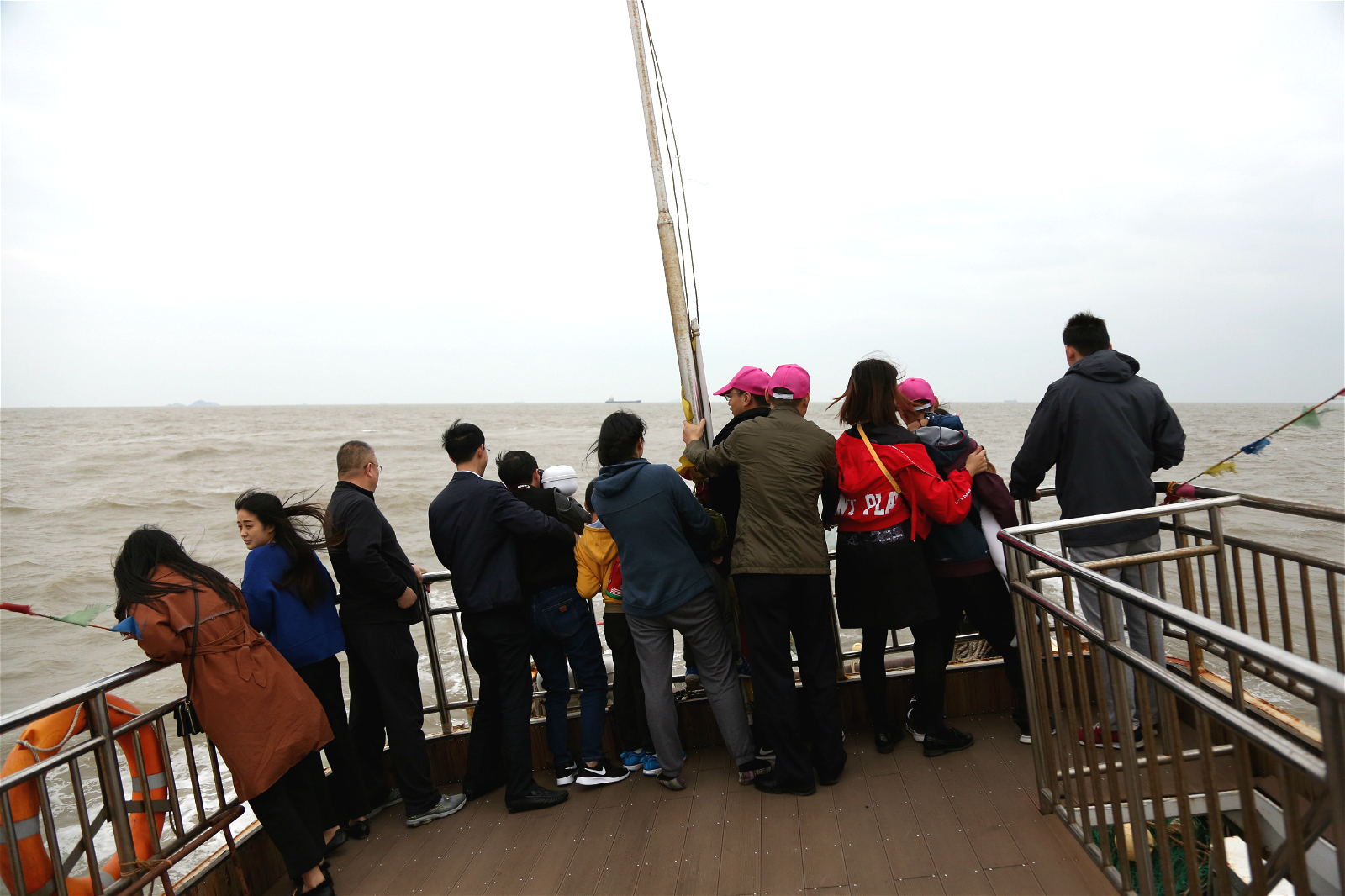 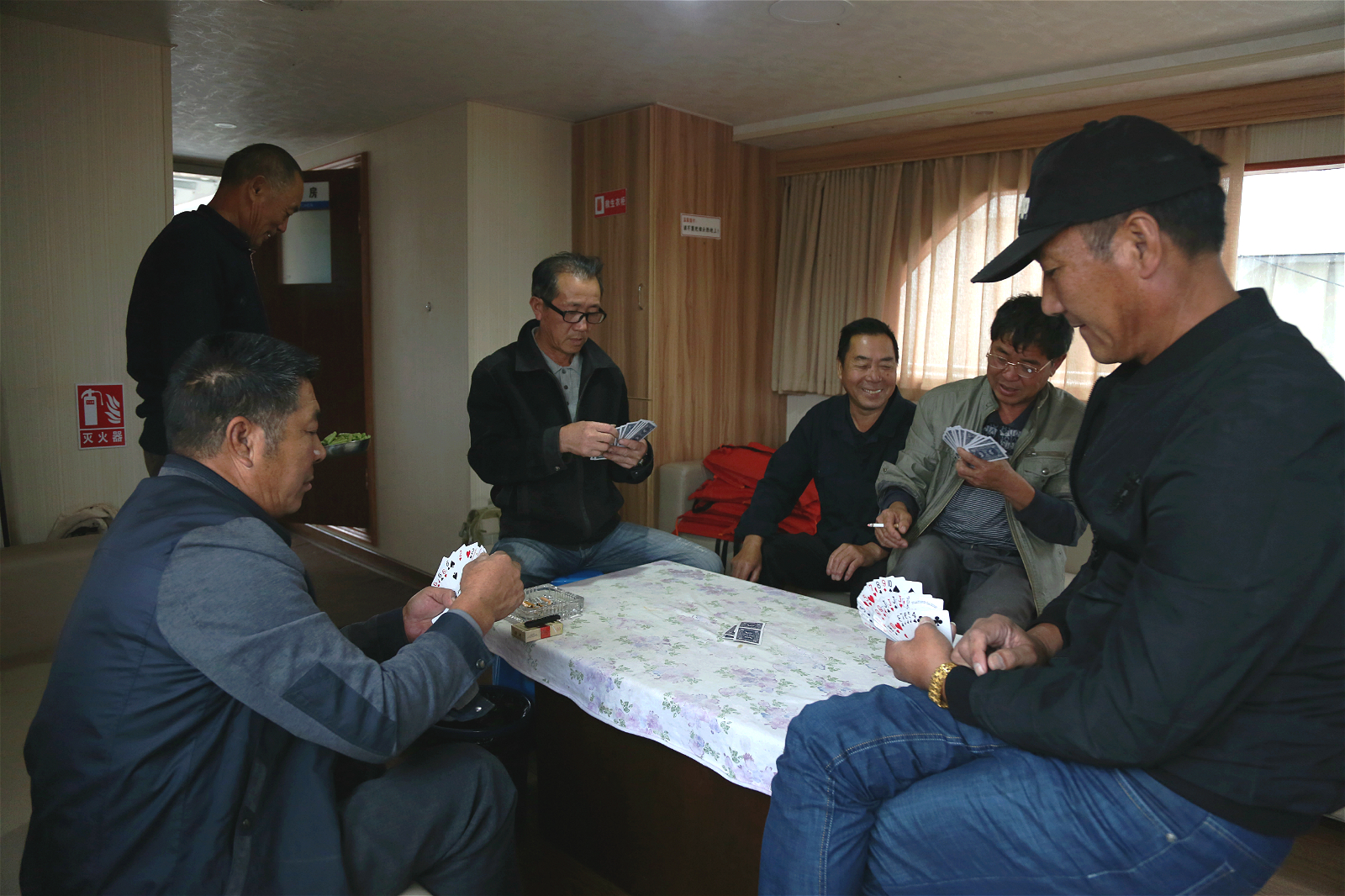 Zhejiang’s fisherman like to unwind with a game of cards. 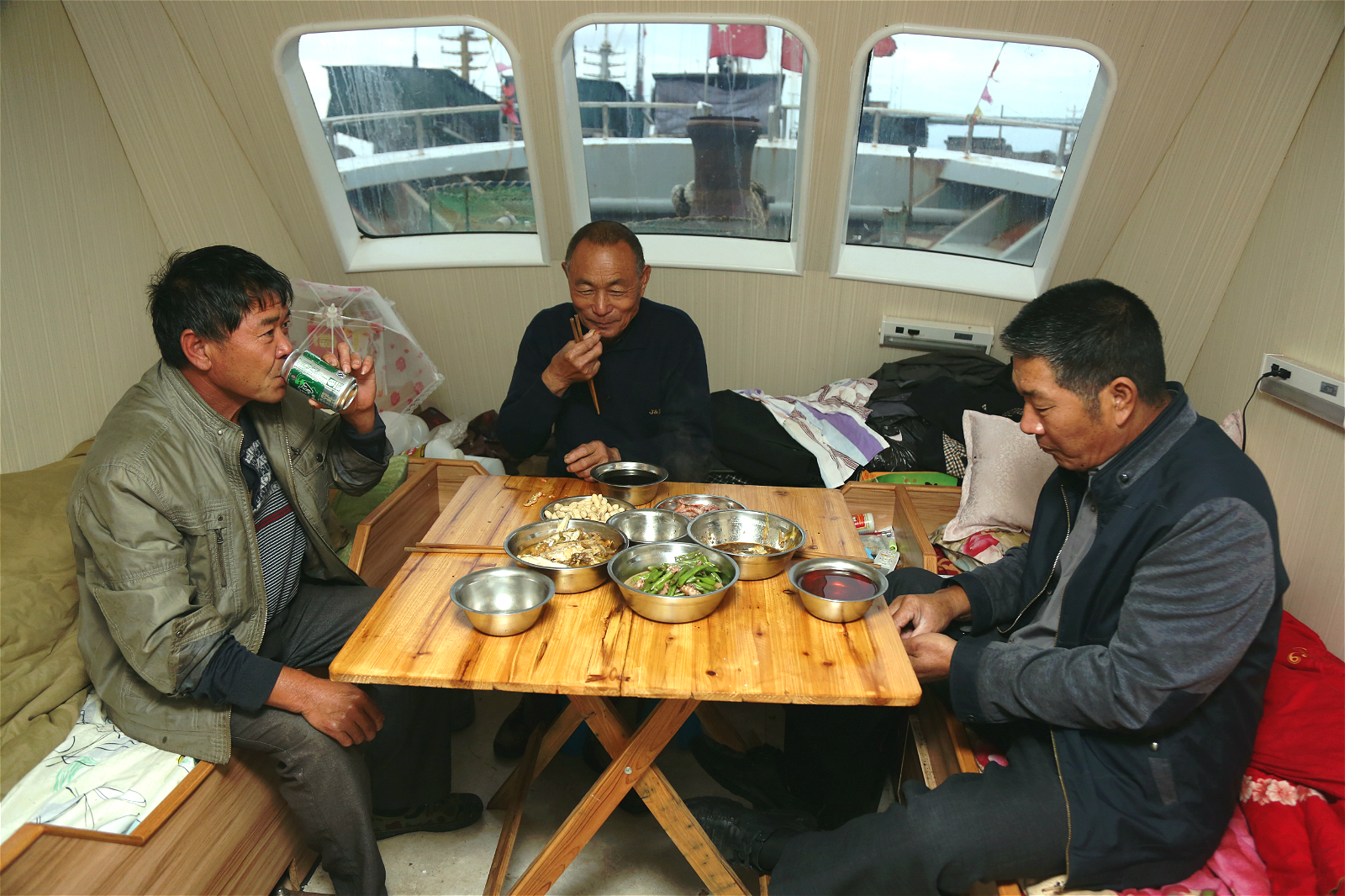 Each recreational fishing boat employs two fisherman who both live and eat on board. 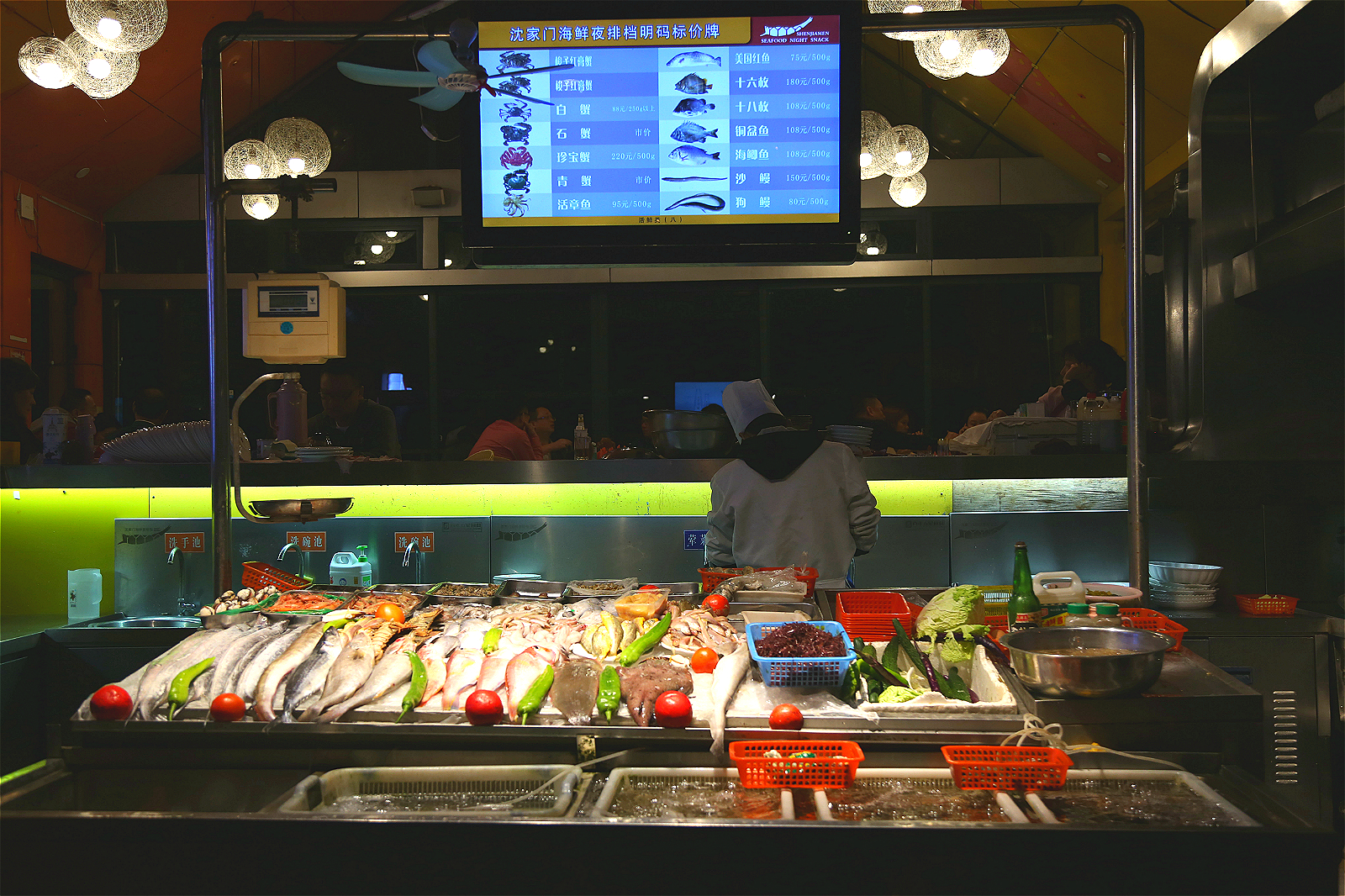 Consumer demand for fresh catch is rising across China. 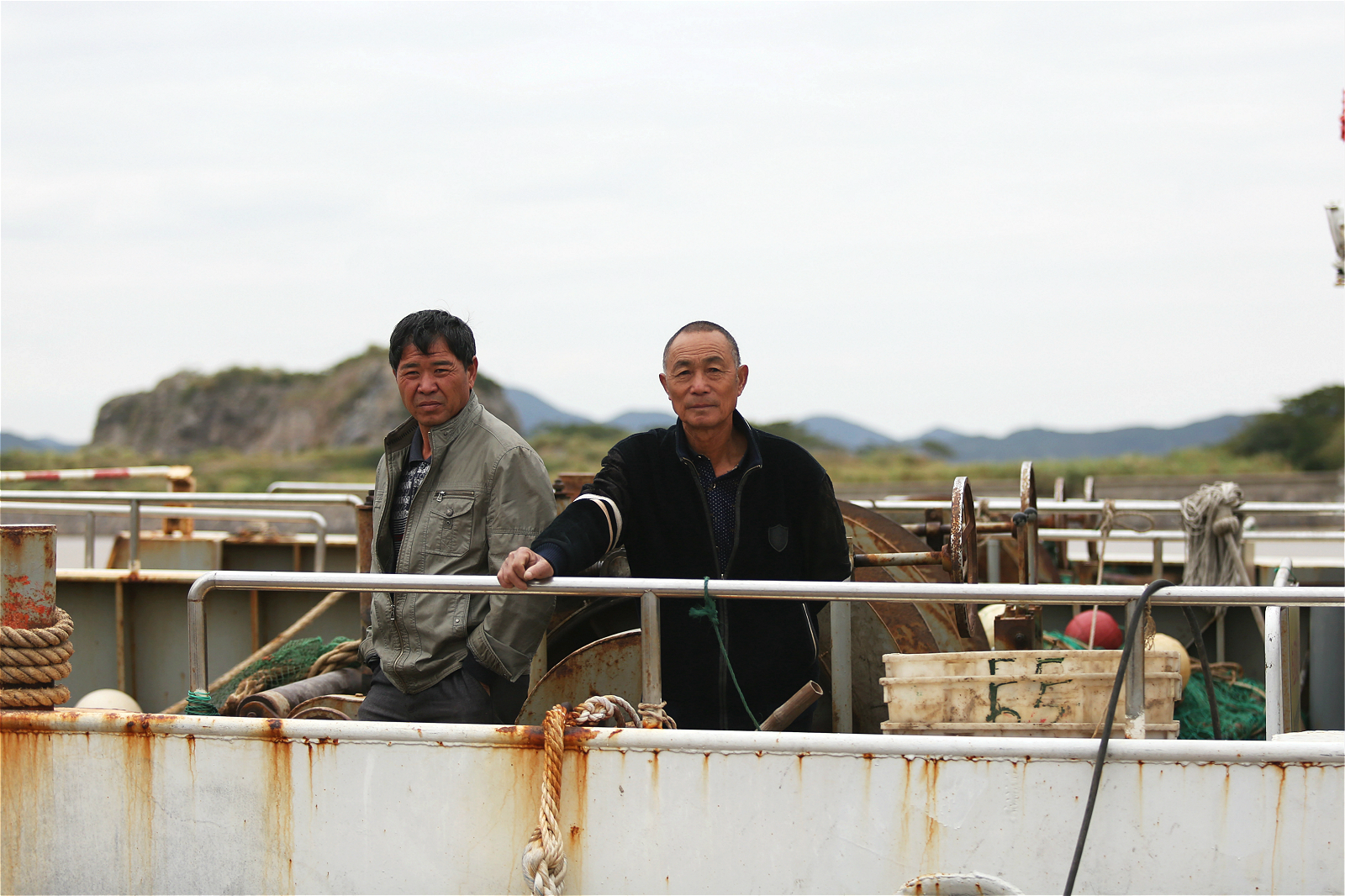 Wang and Lin offer “recreational fisheries tours”; one of the transitional routes to reduce the intensity of overfishing in Zhejiang. 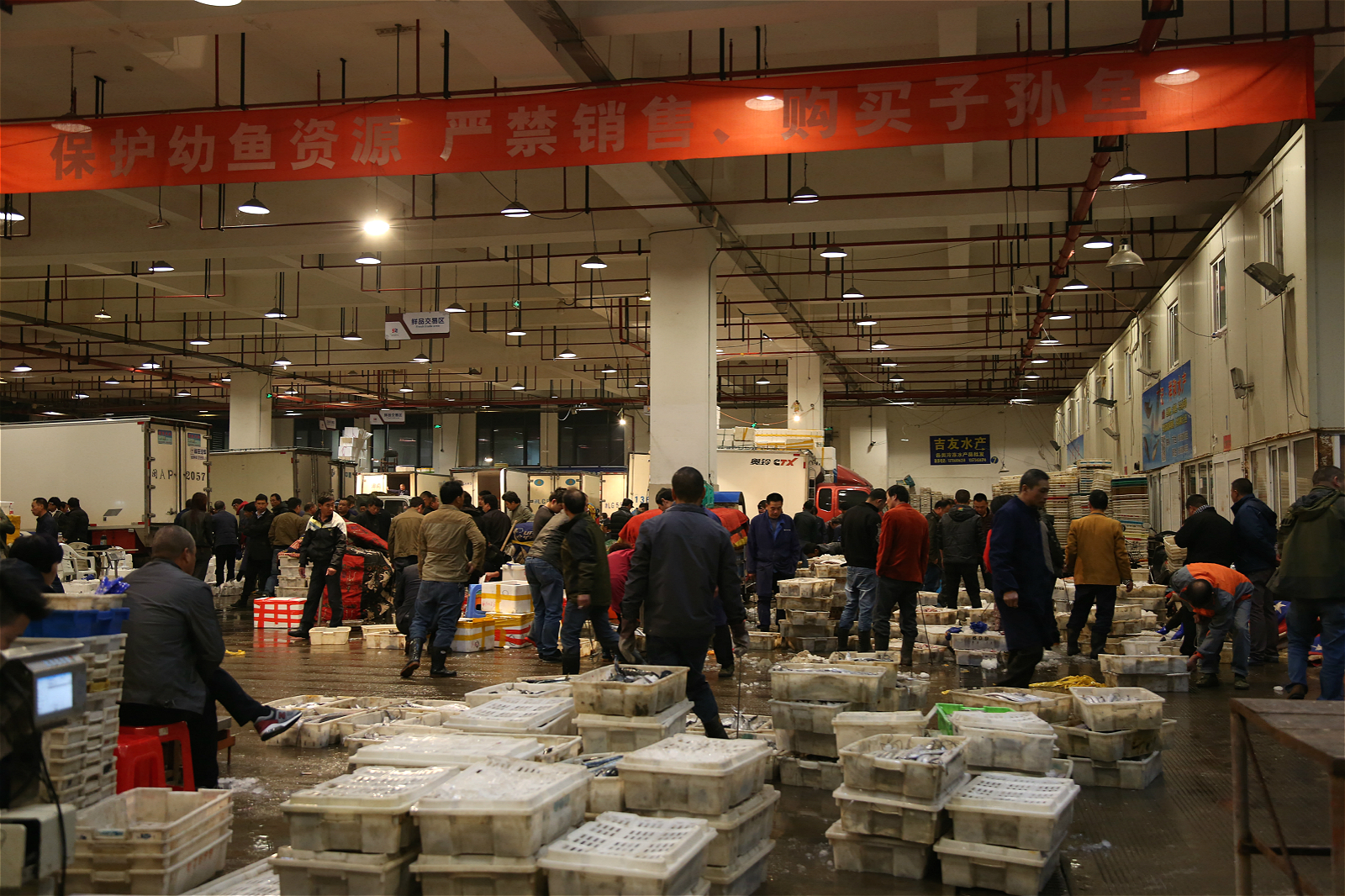 In the local fish market, banners that read “conserve juveniles stocks” hang up above the stalls. 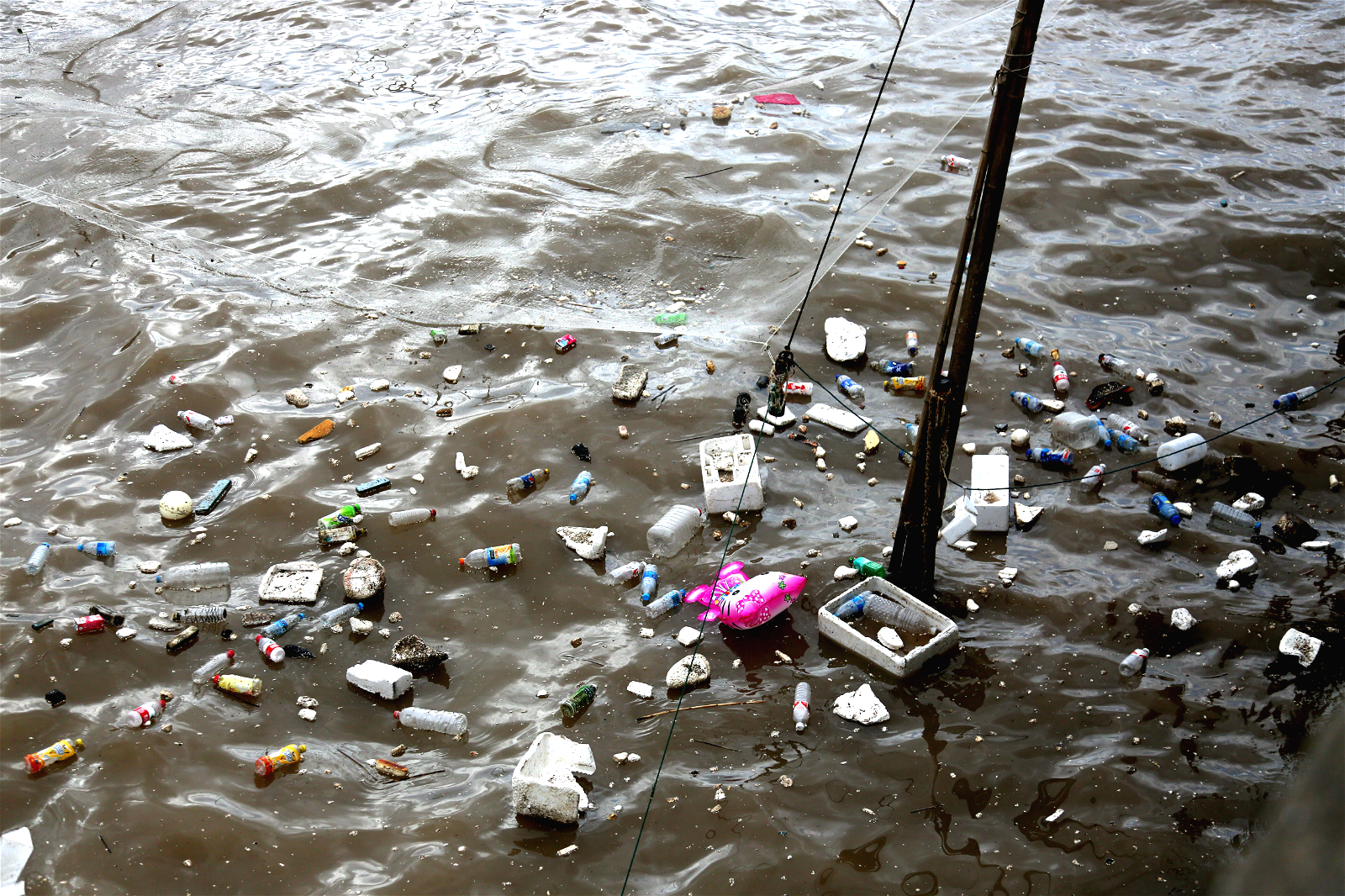 A toxic soup of plastic waste from on-land floats near the seawall. 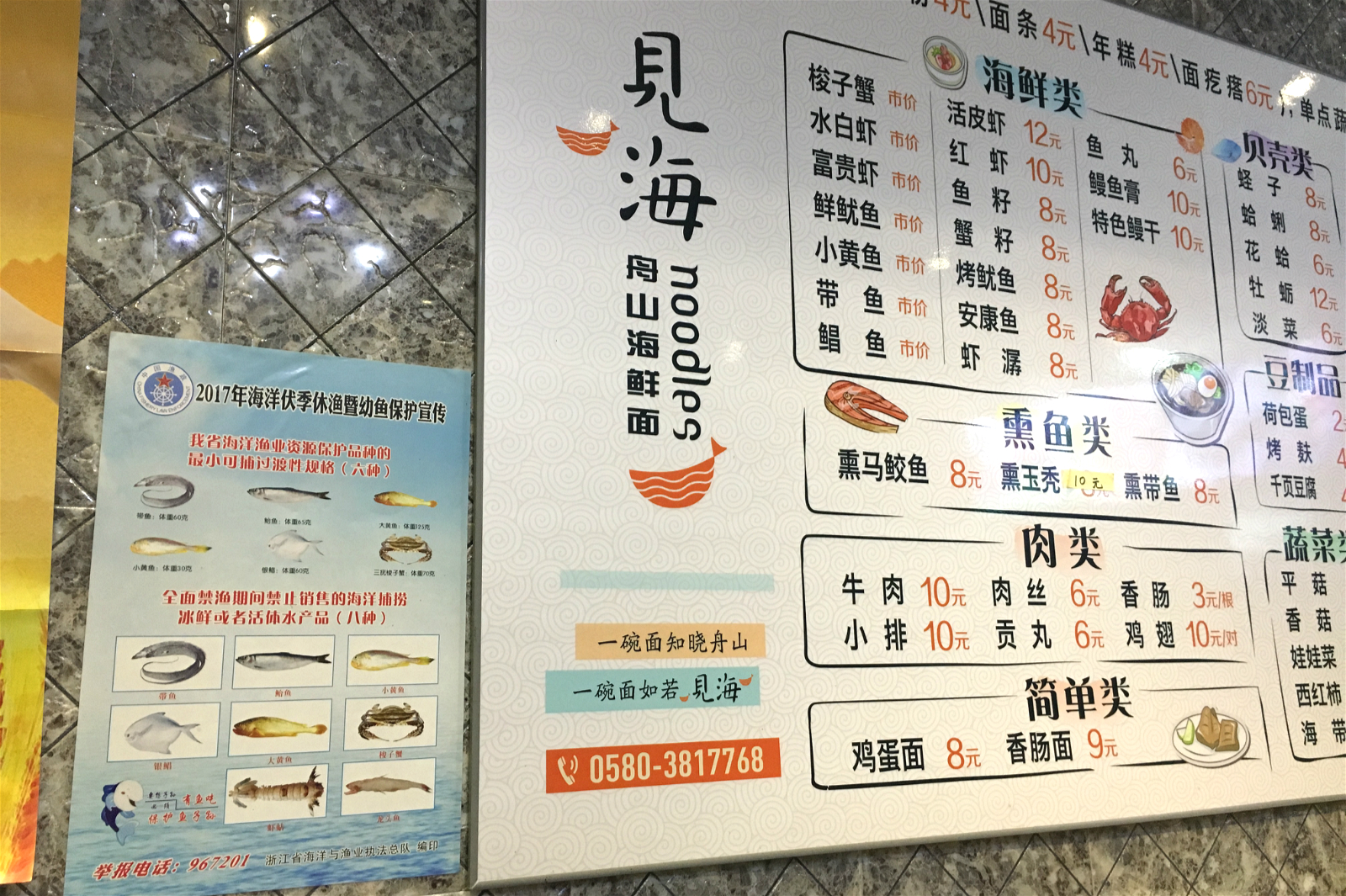 Time running out for WTO to act on fishing subsidies