Using a small pickaxe, Huong digs through rocks to find shining chunks of coal. On good days, she can collect 80 kilograms, selling the lot for 400,000 dong (approximately US$16).

Huong is immersed in a nearly 200-year-old practice – extracting coal from north-eastern Quang Ninh province. In the heart of Vietnam’s coal mining industry, Cam Pha, she gathers the remaining coal from a now-closed open pit mine.

“I just take the beautiful ones,” she says of how she distinguishes coal.

Although open-pit mines have been all but exhausted in the city, hundreds of miners still report daily to coal-rich tunnels dug deep into the mountains.

To the sound of dogs barking, a network of trams shuttle coal down the mountainside, and workers dump truckloads into sloping piles at the port across the highway.

At the 2021 UN climate conference, COP26, Prime Minister Pham Minh Chinh had committed Vietnam to reach net-zero carbon emissions by 2050. But government promises to reduce emissions have since been called into question.

Ahead of this year’s conference, COP27, negotiations failed between Vietnam and G7 countries on a financing deal, known as a Just Energy Transition Partnership (JETP), to support Vietnam’s clean energy transition. By 14 December, Vietnam and G7 nations (with the inclusion of Norway and Denmark) reached an agreement. The funding for the transition was increased to US$15.5 billion and pushes Vietnam to cap its greenhouse gas emissions by 2030 instead of 2035. According to the deal, Vietnam will peak its installed coal power capacity at 30.2 gigawatts (GW) instead of the previous 37 GW target. By 2030, renewable sources will provide 47% of the country’s power.

Despite a boom in renewables deployment and the new JETP agreement, Vietnam faces several challenges in its effort to become carbon neutral: clashing interests inside government, an electricity grid in urgent need of modernisation, and pricing issues for solar and wind power are still holding back the renewables sector. 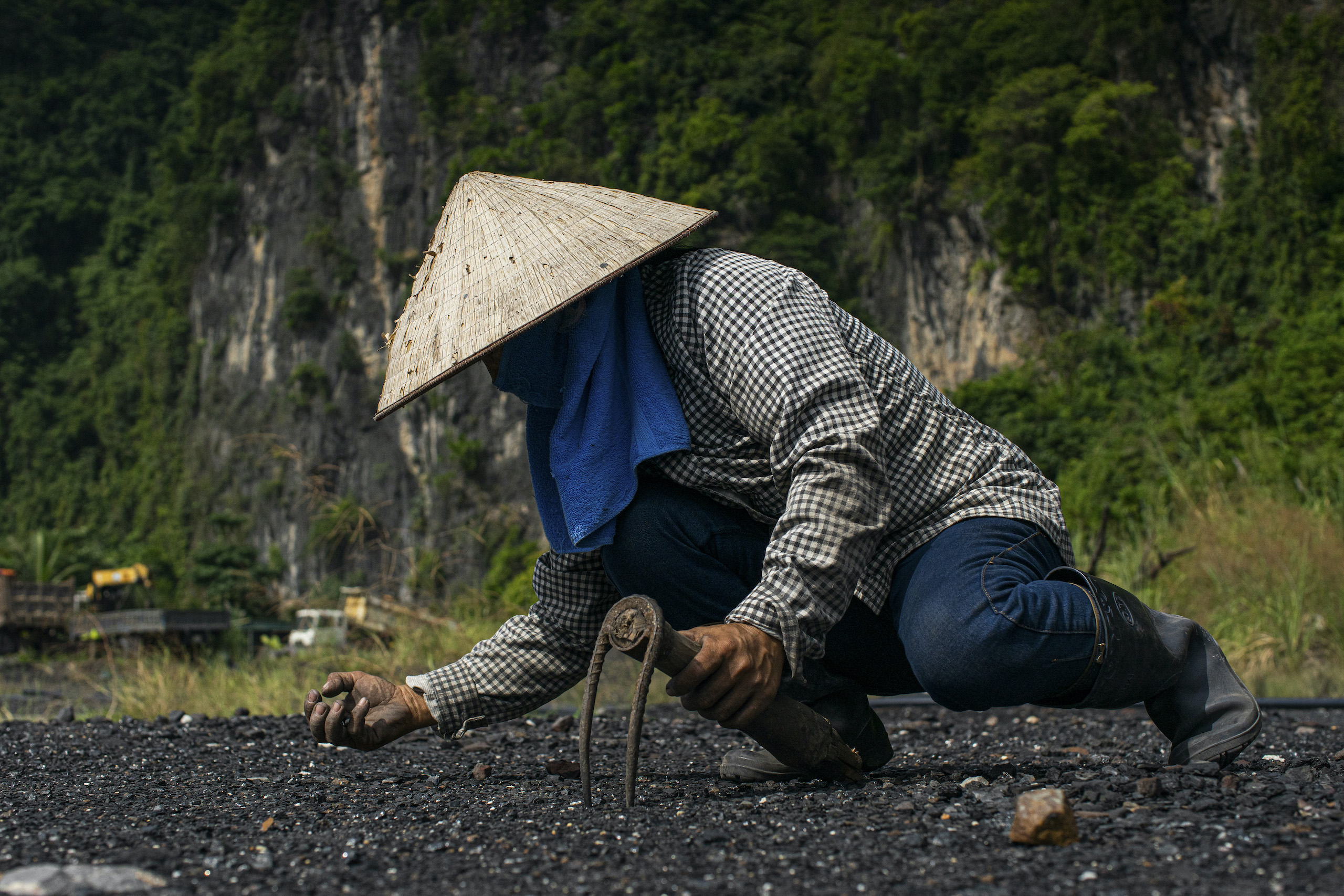 “There’s a lot of problems on how to reduce the carbon footprint of the economy, and to produce more clean energy while ensuring the energy security of the country,” said Le Hong Hiep, a senior fellow at the ISEAS-Yusof Ishak Institute in Singapore.

“It’s good to have a very fancy plan, but it’s even better if they can know how to turn that into reality.”

Wind turbines protrude along the coast and solar panels cover wide stretches of land. Strong winds and ample sunshine have made the province a renewables powerhouse.

But the surge has left the grid unable to cope with the full installed capacity. As a result, renewable generators are often unable to sell all their power to state-run electricity company, EVN.

“The national grid system is overloaded,” says Tai Em, who works in the renewables sector.

“Sometimes, if they produce 100 [megawatts] in one day, they can just sell 50. The rest of it will be thrown away,” he adds. “It’s a waste. They need to upgrade the national grid.”

The boom in renewable power was led by a government programme to incentivise investment. In 2017, the government introduced the first feed-in tariff for solar projects, offering a fixed rate of 9.35 US cents per kilowatt hour of electricity for the next 20 years. Only projects completed before June 2019 would be eligible. The next round of feed-in-tariffs for solar, announced in April 2020, with slightly reduced rates per kilowatt hour, expired for projects which were not completed by December 2020.

According to ISEAS’s Hiep, the country’s renewable sector is plagued with corruption. Investors saw the government’s generous feed-in-tariff as an opportunity to cash in. As a result, the installed renewable capacity ballooned as investors made projects as big as possible to maximise profits, and in a rush to meet deadlines paid bribes for licences, land clearance, and to ensure connection to the national power grid.

“Obviously now the government does not want to develop new solar power projects, because they see it is as excessive already,” Hiep says. “Renewable energy planning is very messy.” 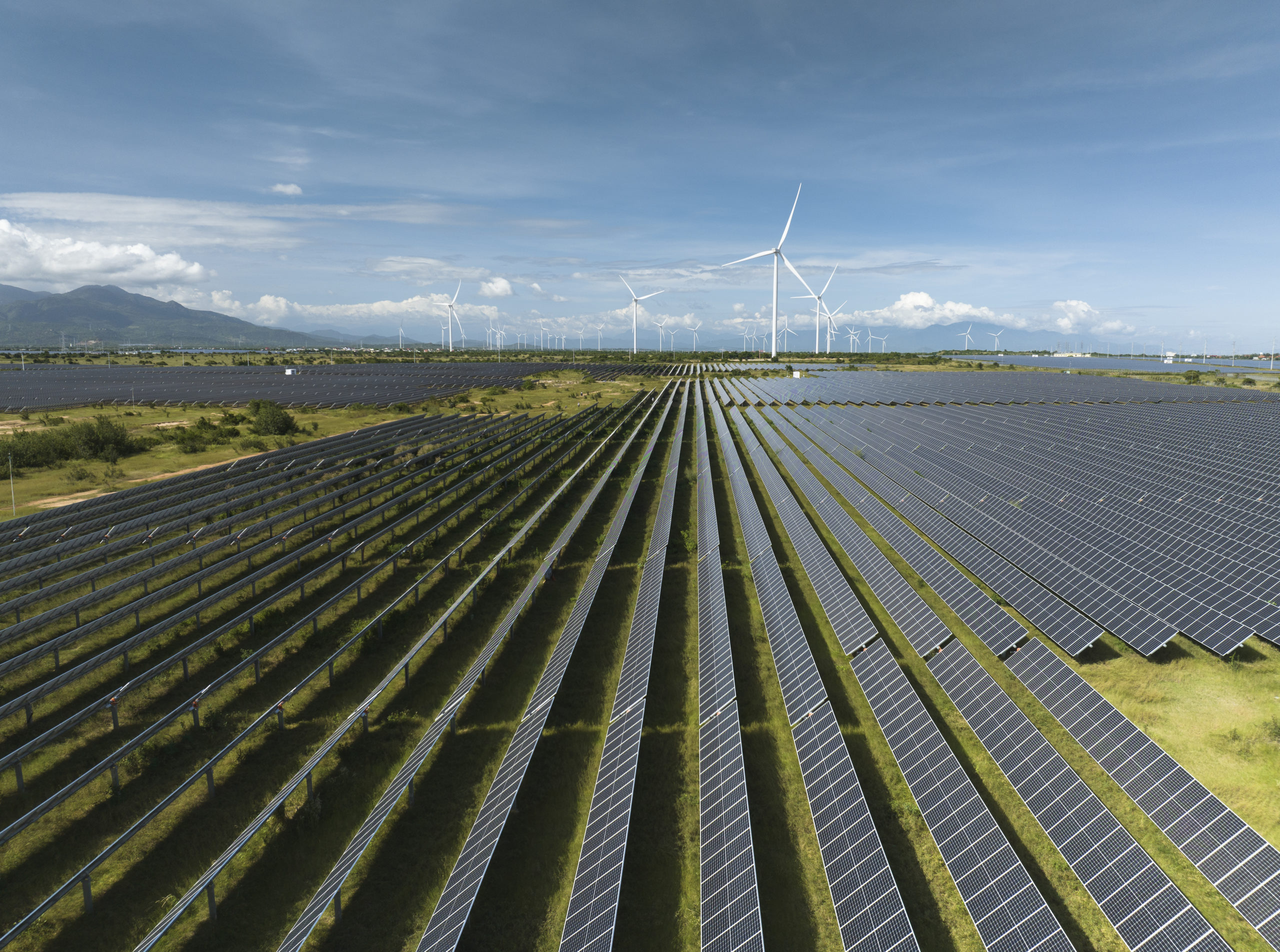 By 2020, Vietnam had the most installed solar capacity in Southeast Asia, generating 16,500 megawatts (MW) that year. Wind energy also soared thanks to a feed-in tariff. With just 31MW of wind energy capacity in 2011, the amount increased to 4,118 MW last year.

“The power came online so quickly,” says Courtney Weatherby, deputy director of the Stimson Center’s Southeast Asia Program. “They didn’t have enough planning and enough parallel investments in the grid and transmission infrastructure to sort of accept all of that power.”

At the 50-MW Chinh Thang wind farm in southern Ninh Thuan, plant manager Pham Minh Duc says they sometimes curtail as much as 80% of output.

“It depends on the coordinator from EVN. We don’t have the calculation process… We just follow the order,” he says. “It changes every day.”

At the Adani Phuoc Minh solar and wind farm, power plant manager Dinh Van Thang faces a similar problem. The plant must cut approximately 20% of its solar output and 50% of its wind power every month.

Wind and solar farms that have been completed but missed the deadline for the feed-in-tariff face even bigger problems.

“[There are] a whole lot of solar and wind projects which are already built or almost finished but cannot go on commercially because they missed the deadlines to get the feed-in-tariff mechanism,” says Minh Ha Duong, founder of the Vietnam Initiative for the Energy Transition. 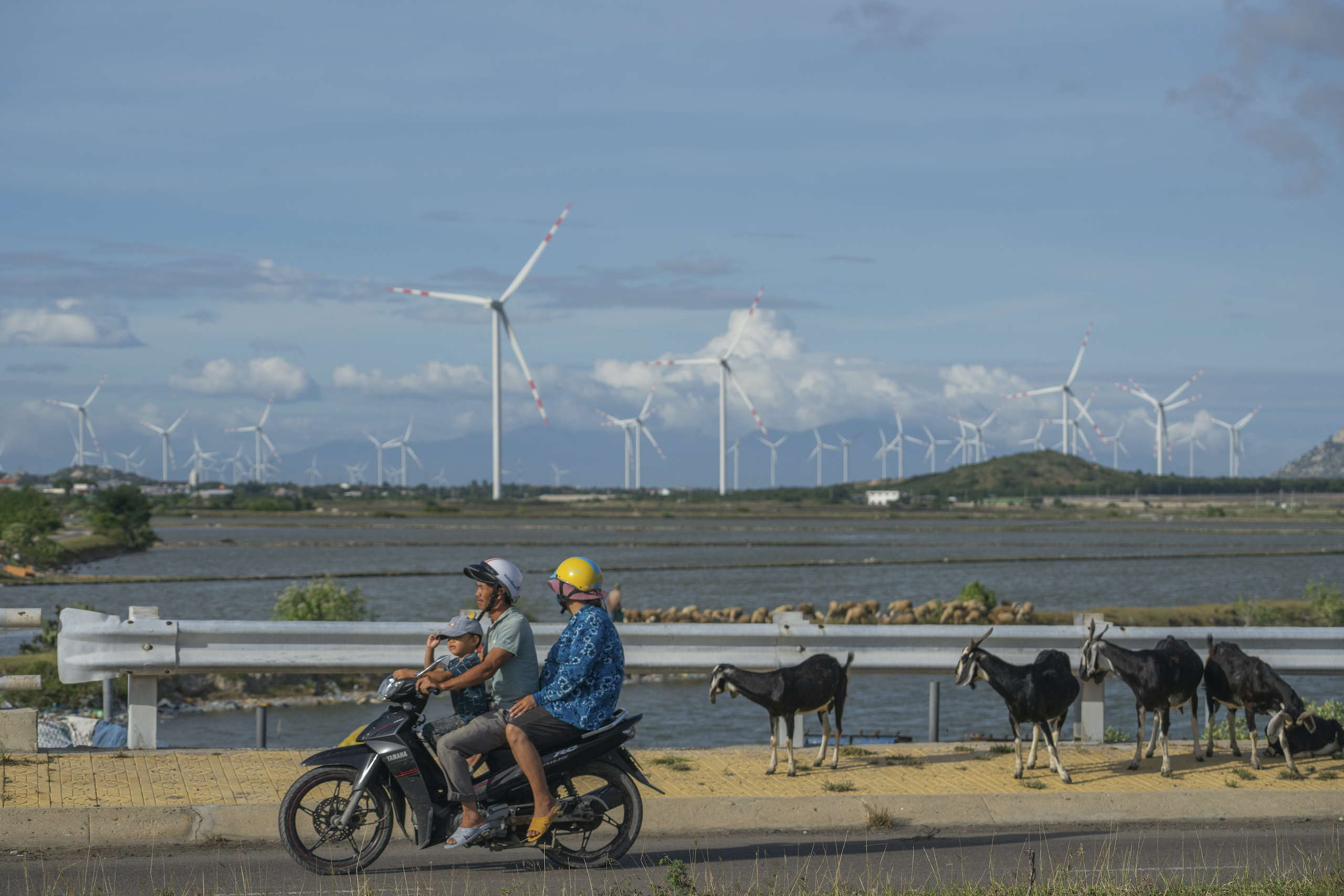 The proposed mechanism is for EVN to negotiate rates with each renewable project individually.

While the country’s renewables sector is dependent on private investment, the coal industry in Quang Ninh is closely tied to the government.

When Vietnam gained independence from the French in 1954, the country took control of the mining industry. Now, state-run Vinacomin is the largest coal producer in the country. Last year, 48.3 million metric tonnes of coal were produced in Vietnam making the country among the world’s top 20 coal producers.

Since China’s moratorium last year on funding the construction of new overseas coal power stations, Vietnam lost its most significant coal financier. Despite this, the country appears to be backtracking on its coal phase down.

After China and India, Vietnam has the world’s third-most planned coal projects and is in the top 20 consumers of coal. As many as 11 new coal-fired plants are planned in the coming years.

Vinh, a retiree in Cam Pha, has been surrounded by the coal industry since his youth. He first got work trucking coal out of Deo Nai coal mine, then bussing miners up and down the mountain, and eventually working in the office.

From his house at the foot of Deo Nai, vehicles rumble up and down the mountain. A heavy layer of dust darkens the leaves of a nearby tree. He says pollution from mining is “unavoidable.”

Thai Le Hong has been working as a coal miner in the Mong Duong mine for the past 24 years. He says coal mining is still a non-stop operation in Cam Pha, where the day is split into three eight-hour shifts.

Hong sits with his sister, Lan Anh, reminiscing about the impact of mining on their hometown.

“Even though we are sitting here, there may be a tunnel system down there similar to a small town,” she says, gesturing at the floor of the cafe she runs on the first floor of a shophouse. “One tunnel is bigger than this house.” 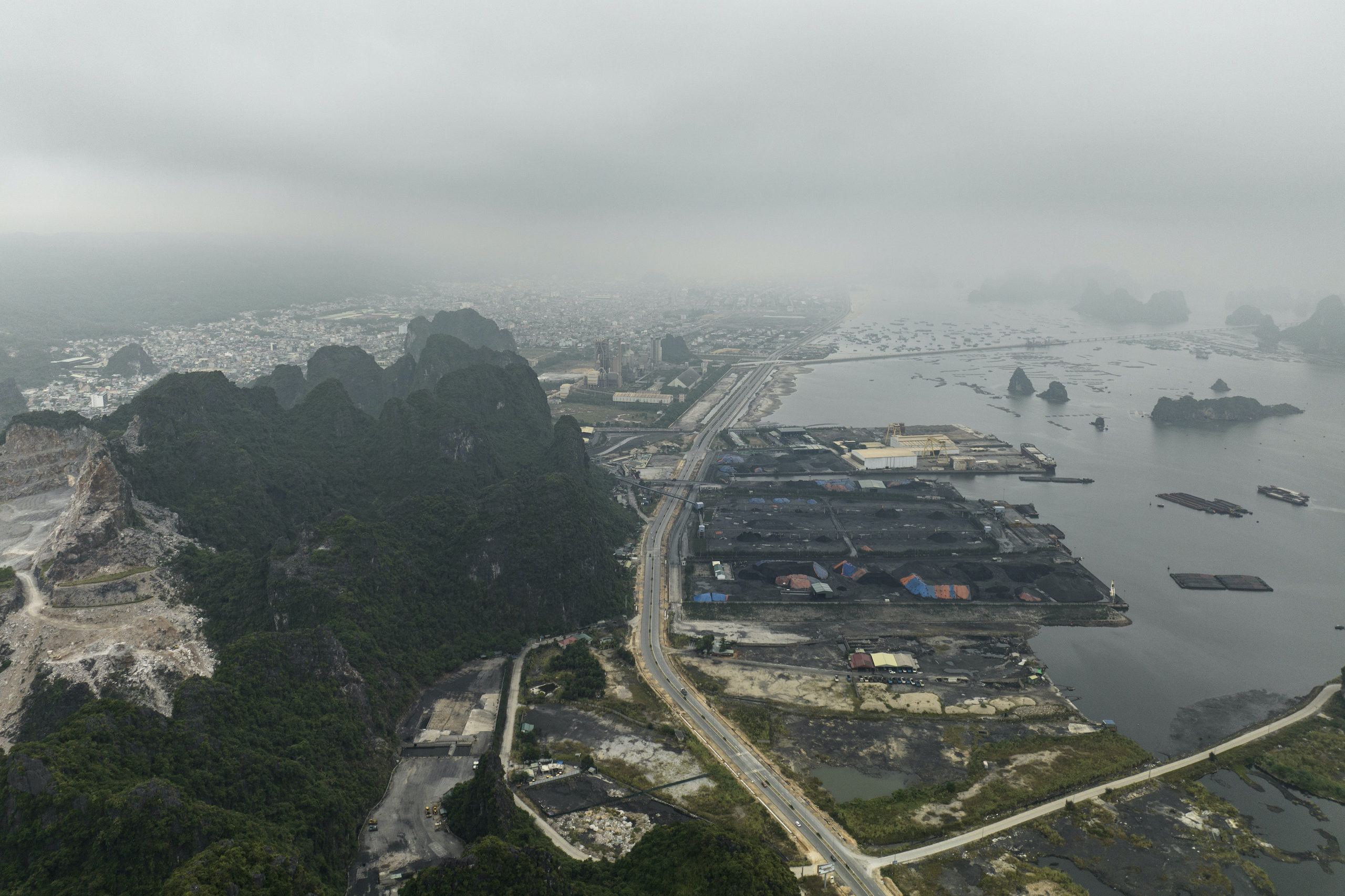 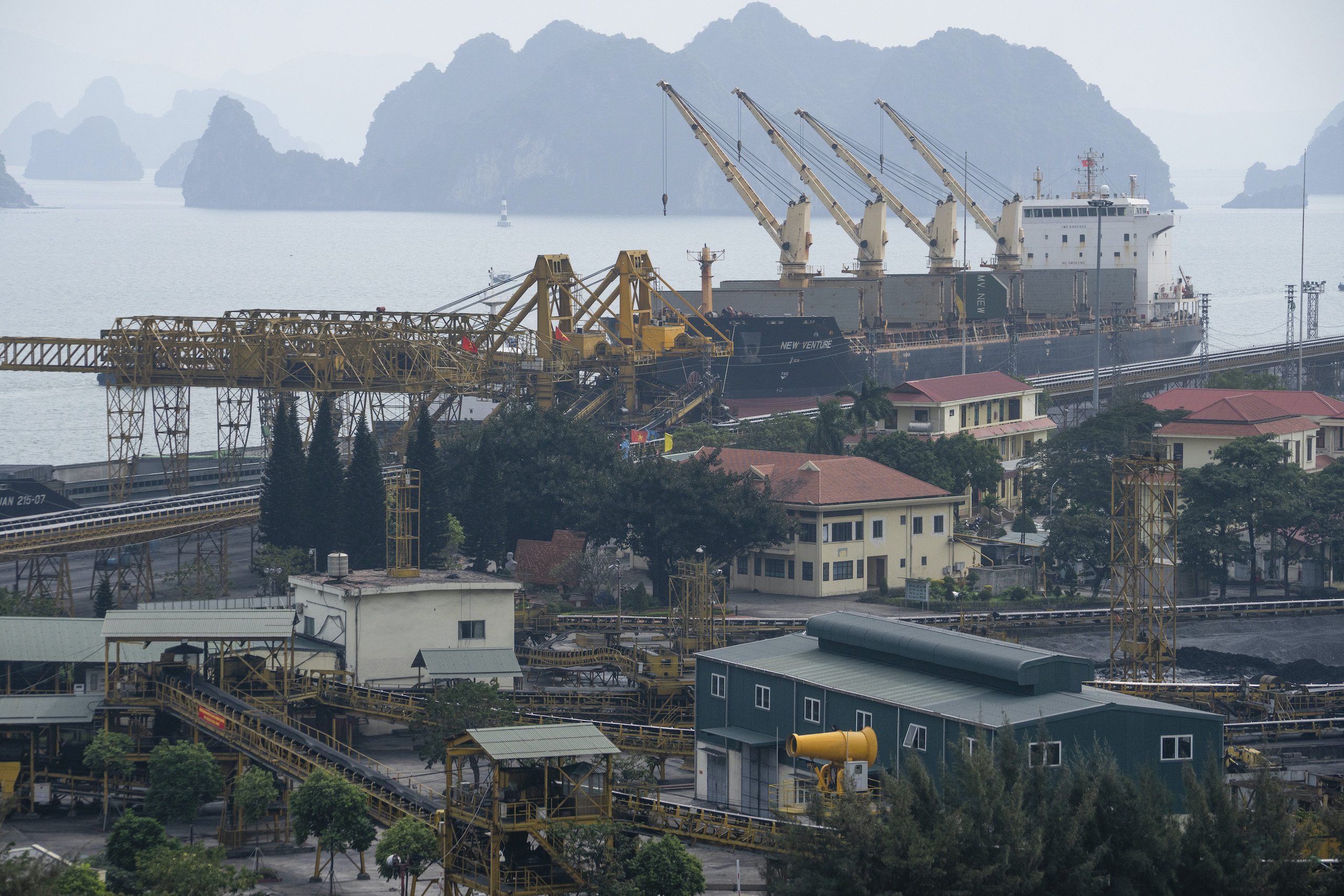 For Dang Nguyen, a legal expert in the energy field, coal-fired plants are “too sweet of a deal” for the country to give up. He sees too many competing interests bogging down Prime Minister Pham Minh Chinh’s decision-making on the country’s long-stalled national power development plan, PDP8.

Although Nguyen is hopeful that the JETP will push the Vietnamese government to take action to phase out coal, PDP8 needs to be settled to move forward.

“PDP8 is the foundation for any new energy projects… To achieve the energy transition target, the government must finalise the PDP8,” he says. “Some of the government officials have very good deals with coal power and they don’t want to lose that deal,” Nguyen adds.

“The prime minister is in the middle and he is the one who has to make the decision… He doesn’t want to upset anyone or he doesn’t want the responsibility.”

China’s no new coal power overseas pledge, one year on

With coal off the menu, can China export its renewables model?

Vietnam looks for solutions to plastic pollution where government fails