On a cloudy day on the streets of Komati, a group of men are loitering in blue overalls.

“We can’t get jobs if the power station closes”, a middle-aged one says.

“We can’t do solar, we don’t have the skills. I am a boilermaker by trade,” the man continues. “People will suffer here if we don’t work. They will protest because they need to get jobs. We are already planning one tomorrow.”

At the end of October, the Komati coal power plant, in eastern South Africa’s coal-rich Mpumalanga province, shut down. In existence since 1961, Komati was the first coal plant to be closed under the country’s just transition plans. It will be repurposed with solar and gas power generation and battery storage. 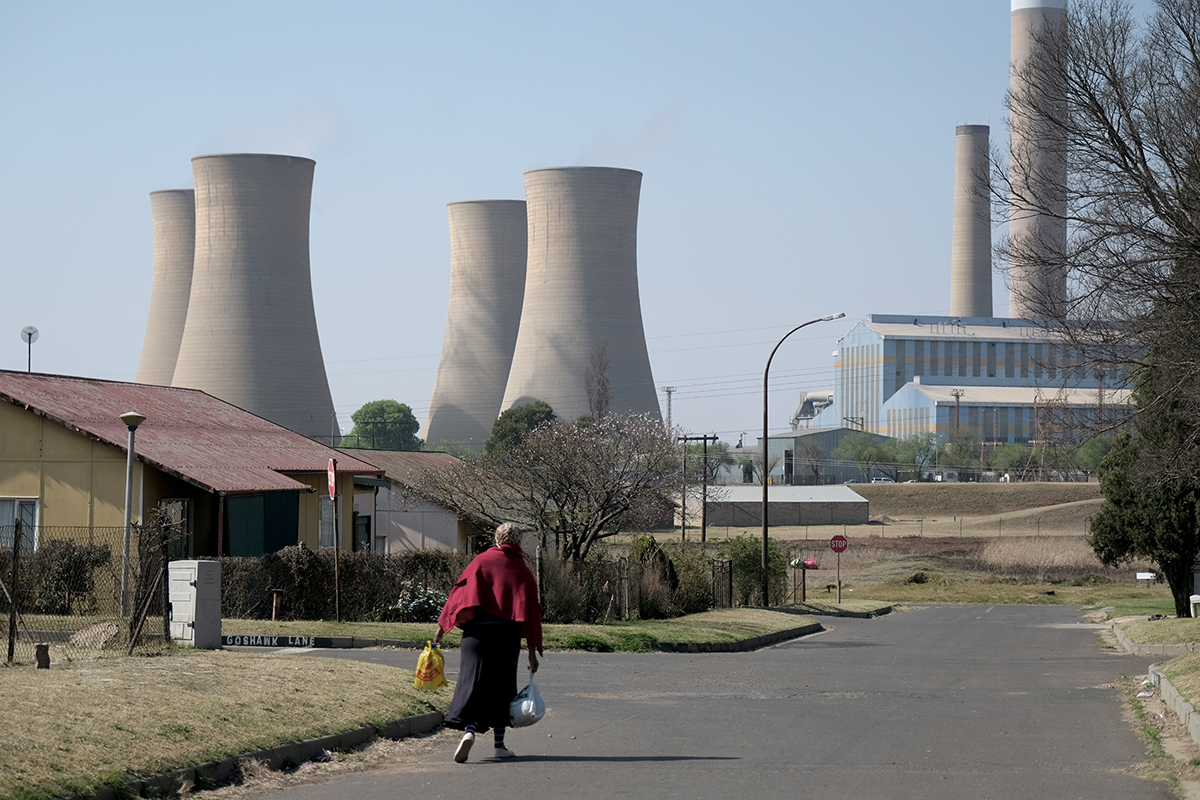 A woman walks down the empty streets of Komati, with the power station in the background (Image: Dianah Chiyangwa)

The just transition conversation is dominated by concerns about how changes to industry will affect male employment. Yet women are affected too, with growing evidence that in coal communities they will be even more vulnerable to the changes wrought by South Africa’s energy transition. With their male partners out of work, they may struggle to survive since they are already pushed to the margins of the economy, often working in the informal sector.

However, if South Africa’s energy transition is managed well, then it could increase opportunities for women. For example, the country’s growing solar PV sector could provide opportunities, and help to address the gender imbalance in employment and pay.

At last year’s UN Climate Conference, COP27, South Africa launched its US$8.5 billion Just Energy Transition Investment Plan. This was the first stage in implementing the Just Energy Transition Partnership (JETP) announced at COP26 the previous year. The JETP partners, which include France, Germany, the UK, US and EU, have pledged to raise some of the required finance via grants, but much of it will be mobilised from concessional and commercial financing. The investment plan earmarks funding for decommissioning coal power plants, expanding renewables and upgrading grid infrastructure, as well as investing in sustainable manufacturing, such as of new energy vehicles, and in skills and training.

Komati is in line to benefit from the plan and its focus on ensuring that the move away from coal is just and equitable. The area surrounding the Komati power station is expected to be used for a mixture of agriculture and assembling renewable energy technologies, like off-grid battery storage, solar panels and wind turbines. In the nearby town of Middleburg, however, little is known about what life after coal will mean.

“Awareness levels are like zero percent. People just know that mines in the area are closing down, but the reasons why… they have no idea. Even the people who work there aren’t clear,” said Dineo Mokoena of the Middleburg Environmental Social Justice Alliance, which is working to create awareness on the effects of coal mining, climate change and the transition away from coal. 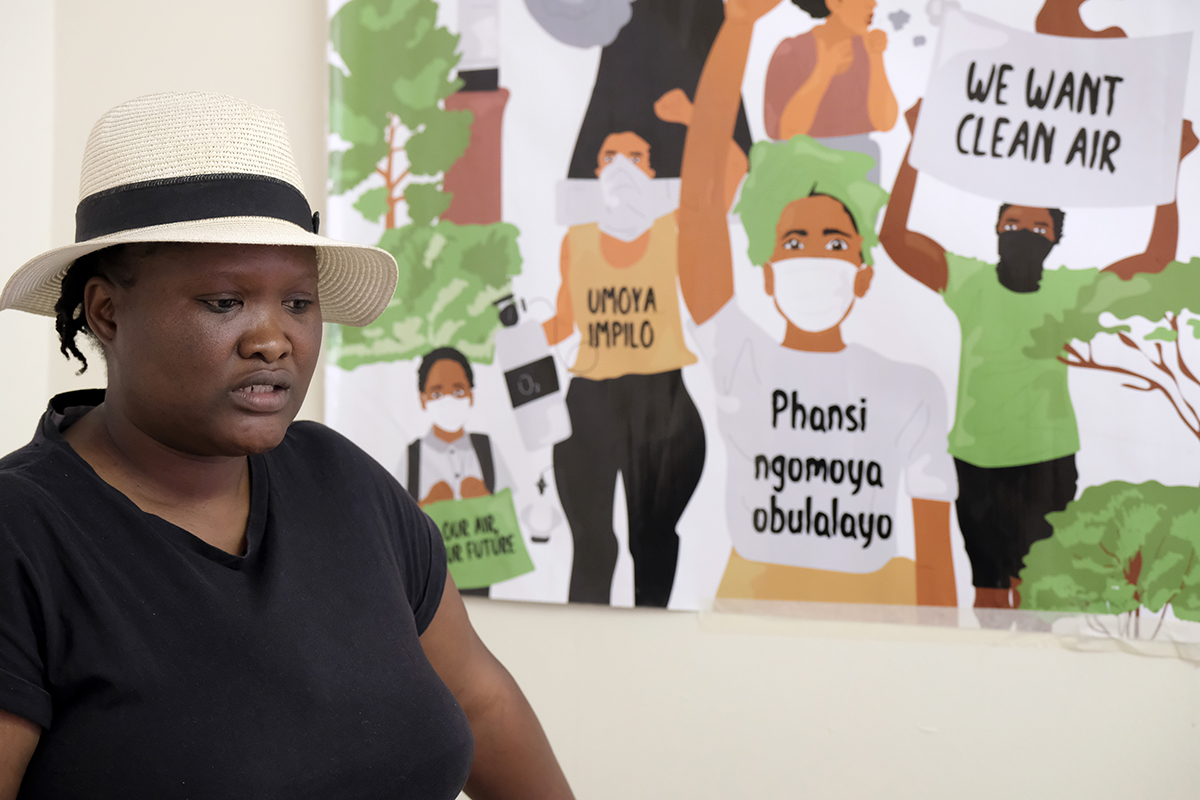 Dineo Mokoena works to build awareness of the effects of coal mining and of a renewable energy transition that can benefit entire communities (Image: Dianah Chiyangwa)

“Our goal is mainly to try to make them aware of what is going on. At the end of the day, we were born here, our parents were born here, we have nowhere else to go. We want to be in a position where we get to be informed so that we can make better decisions, as a community, for our livelihoods.”

On the fringes of South Africa’s lucrative coal sector

A national climate risk and vulnerability assessment completed last year echoes other research findings that vulnerability in the coal sector is highly affected by gender. It finds that women living near polluting industrial facilities do not benefit much from them financially but are disproportionately affected by their adverse impacts.

As for the transition, a study by researchers from Australia National University published last year suggests that the men and women of coal-reliant communities will experience changes differently and that “vulnerabilities will be gendered.” One former employee of the Komati coal power plant, Lindiwe Mahlangu, said she would support any effort to keep the plant running, despite being unemployed for over five years. “We are worried because we don’t know what will happen. We need more information. It is too tough now. We’ve got children, we must pay school fees and transport, and we can’t.”

Women are key to a just transition

According to IRENA, 32% of the global workforce in renewable energy is female, a slightly closer gender balance than in the fossil-fuel energy sector.

There are concerns, however, that energy transition policies tend to focus too heavily on male industrial workers.

“The excessive focus of transition policies on (male) workers falls short of fully addressing the socio-economic effects of transitioning away from coal. This leads to an incomplete mobilisation of regional capacities for transition, and reinforces existing inequalities between men and women,” researchers Isabel Braunger and Paula Walk argue in regards to coal transitions in the US and UK.

Leleti Maluleke, a researcher for the Human Security and Climate Change programme at Good Governance Africa, says people cannot be expected to support a transition to green energy if it fails to address the particular challenges women face.

“It is important to address the grievances that individuals and communities have and encourage participation,” she said.

“The scarier part is the social ills that would come along with it if parents would have to leave or find better jobs to feed their families. Children will be left alone. Then what kind of society will we have?”

During the Presidential Climate Change Commission hearings earlier this year, women showed up in numbers to voice their experiences in the shadows of some of Africa’s largest emitters. A number complained about the culture of sex-for-jobs, sexual exploitation and abuse in the mining towns of Mpumalanga.

Gilbert Macua, of Mining Affected Communities United in Action (MACUA), said that “most women in the mining areas have challenges in getting the jobs because they are being asked for sexual favours.”

The scale of South Africa’s just energy transition involves significant redistribution of resources and opportunities, opening up the potential for better pathways for women.

In September last year, the Department of Mineral Resources and Energy (DMRE) launched the Women Empowerment and Gender Equality Strategy. It includes working alongside renewable energy companies and associations to bridge the gender gap in the energy sector on employment and pay.

“It is important to do this with the private sector and all relevant stakeholders because as a government we cannot achieve this alone. We need broad buy-in of the strategy,” said Winnie Mamatsharaga, head of gender at DMRE, who added that baseline studies are underway to quantify the gender gap in each energy subsector.

“We observed the energy sector is not well represented but with a baseline study we can prove it. During our roadshows, women have shown they know little about the energy sector and we needed a vehicle to inform them about how they can participate.”

As well as the renewable energy industry being associated with a higher proportion of women in the workforce than fossil fuel energies, the development of agriculture in former mining areas has the potential to drive economic growth and lift women out of unemployment.

Komati’s decommissioning will be followed by Hendrina, Camden and Grootvlei power stations. The four stations have a combined capacity of 5.7 gigawatts although their ageing units have been producing below that for several years. By 2035, Eskom plans to halve coal generation as per the Integrated Resources Plan, the government’s two-decade blueprint for South Africa’s energy sector.

The country has an opportunity to restore the dignity and rights of women who were left behind during the era of fossil-fuel-powered industrialisation. But to make this happen, the just transition process must be more transparent and inclusive. Women need to be included in the policy-making process, as well as in implementation. There is also a need for more participation from women in research on renewable energy solutions. This would help mainstream gender from the drawing board down to real world implementation. In addition, gender balance monitoring and audits will help ensure the energy transition travels in the right direction for South Africa’s women.

Mokoena, of the Middleburg Environmental Social Justice Alliance, is worried about the costs of getting it wrong.

“We wouldn’t want to find ourselves in a position whereby we become a lost society, a much more traumatised society than we were during apartheid,” she warns.

This article was produced as a result of a grant provided by the Africa-China Reporting Project at the Wits Centre for Journalism at the University of the Witwatersrand, Johannesburg, and China Dialogue Trust. The views expressed are the authors.

Hope for environmental justice in Africa

‘Environmental law from below’