On Tiananmen Square, China’s very heart, an 850 square metre solar installation is in operation. The panels sit on the roof of the Great Hall of the People, generating 98,000 kilowatt hours (kWh) a year to run the building below. This is not a common arrangement. Nationally, next-to-no government or public buildings have rooftop solar installations.

In late June, the National Energy Administration (NEA) published a notice on county-level trials of distributed solar power generation, designed to boost rooftop solar. This may prompt a new spurt in solar installations, on both public and private buildings, over the next five years. Statistics collected by industry media outlet BJX indicate 75 county-level governments have picked firms to install distributed solar and are set to start trials.

What is distributed power generation?

Unlike a coal-fired power station feeding the grid, distributed power is electricity generated on a smaller scale. The power can either be used by the home, office or other facility that produced it, sold to other users in the vicinity or sold to the grid. Distributed power generation has the potential to improve energy security, lower power costs and reduce CO2 emissions.

The NEA notice encourages counties to sign up if they have appropriate rooftops, good grid access and the technical and financial capacity to roll out the programme. Electricity grid companies are expected to provide connections where possible, making upgrades if necessary, to ensure distributed solar power can be connected to the wider network.

To apply for the trial, at least half of the rooftops of a county’s Party and government buildings needs to be suitable for solar installation, and 40% of other public buildings such as hospitals and schools. Liu Yiyang, deputy secretary general of the China Photovoltaic Industry Association, told China Dialogue that solar power installations on the rooftops of Party and government, university and hospital buildings are rare, but the trials could change that.

At last December’s Climate Ambition Summit, China set a couple of important goals for the year 2030. Non-fossil energy sources should account for about 25% of all primary energy consumption; and solar and wind power generation should reach over 1,200 GW. At the end of 2020, China had installed 281 GW of wind and 253 GW of solar power, making a total of 534 GW. To meet its 2030 goals, China needs to more than double its wind and solar power generation capacity in the coming decade. Solar power capacity needs to grow by 80 GW a year, according to Peng Peng, secretary general of the China New Energy Investment and Financing Alliance.

This is no easy task. Though growth in solar power farms, which account for the lion’s share of solar capacity in China, had been rapid, it slowed this year. Peng points out that while it will be possible to build more solar farms to drive growth in solar capacity between 2021 and 2025, there will be a bottleneck in how much of it the grid can deal with. Solar power farms are mostly located in northern China. While distributed solar suits the more developed eastern coast, where there is a lot of consumers, easier access to the grid and plenty of room for growth. “Distributed solar will have to account for half of new capacity, if annual growth in solar power is to go past 80 GW,” said Peng.

At the end of 2020, distributed solar accounted for about 78 GW (30%) of the 253 GW of China’s installed solar generation capacity, according to data from the country’s National Energy Administration. Growth in distributed solar appears to be picking up in proportion to growth in solar farms. In the first half of this year, about 13 GW of new solar power capacity was installed, 7.65 GW of that distributed solar.

Rely on rooftops, or innovation?

Over 20 GW of the 78 GW of distributed solar capacity is residential, and around 58 GW is generated on offices and industrial buildings. There are virtually no solar installations on the rooftops of public buildings. The new trials aim to fix that by boosting installations on Party and government buildings, universities and hospitals.

Liu Yiyang told China Dialogue that public buildings are rarely covered with solar panels as they already enjoy relatively low electricity prices. If generating power costs about the same as taking it from the grid, building managers have little incentive to go for solar.

Investors will usually lease a rooftop, provide power to the building owner at a discount, and sell the remainder to the grid. But public buildings tend to be smaller than industrial and commercial buildings, meaning less excess electricity to sell. Also, the investors need to lease public building rooftops from the government, which means more red tape. Liu thinks the government needs to step in to coordinate this process, helping investors arrange grid connections, matching up rooftop solar providers with rooftop owners, and reducing investment costs. The government also needs to educate building owners and investors, increasing their eagerness to develop distributed solar and make better use of the public rooftops. “Before, the building owners didn’t see a need, so even if a solar power firm came knocking they wouldn’t be interested. That roadblock is being cleared now.”

Liu is enthusiastic about the business model: “For the solar power firms, generation from public buildings might be low, but it’s reliable profit.” Governments, hospitals and universities don’t relocate every few years, and can be relied upon to pay their bills. Business and factory owners, in contrast, may use less electricity in a quiet period, or even close down. And if bills aren’t paid, it’s the investors that lose out. 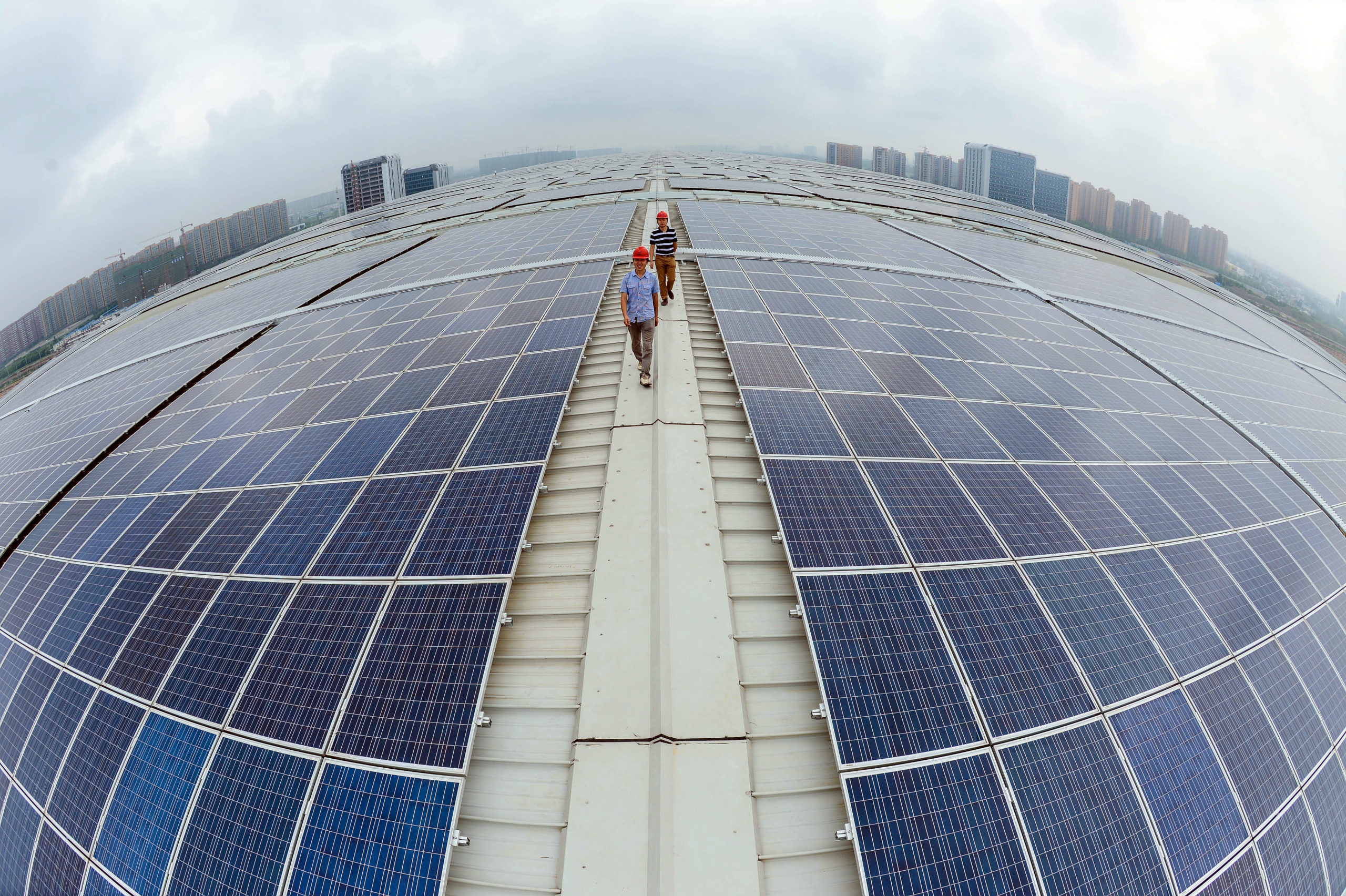 Photovoltaics atop a railway station in Hangzhou (Image: Alamy)

Public buildings have only limited roof space. Peng Peng told China Dialogue that a county government will only have control over several thousand square metres of rooftop space – ten thousand, at most. “Even if you reach the 50% coverage proposed by the NEA, that’s a limited amount of power generation.” She emphasised that the key to developing distributed solar is expansion on the rooftops of industrial, commercial and residential buildings.

Will these new trials promote that? She doesn’t expect to see the trials alone make much difference – it will depend largely on profitability.

Installations on industrial and commercial buildings are either entirely for the company’s own consumption, or excess generation is sold to the grid. Residential installations come in a third variety too – where all power generated is sold to the grid. On-site consumption is the most profitable process, as it removes the need to buy power from the grid at business rates. When power is sold to the grid, the benchmark coal power tariff is paid, which is lower. Li Hui, founder of Adzar Energy, a distributed solar solutions provider, said that in Shanghai large industrial companies pay 0.80 yuan per kWh during the day, which they can save by generating their own electricity. Power sold back to the grid earns 0.41 yuan per kWh.

In neither case are market mechanisms fully in play. Peng Peng points out that reform is required to generate more enthusiasm for distributed solar. The existing system, where sold power can only enter the grid, should be changed to allow generators to deal directly with nearby consumers. That, she says, would make distributed generation more profitable, reducing financing costs and bringing many more projects online.

Li Hui doesn’t expect the trials to have much impact on his business. He told China Dialogue that Adzar Energy specialises in distributed solar installations for industrial and commercial facilities on city outskirts, and has also worked on residential installations. Government-controlled rooftops primarily belong to state-owned enterprises or government institutions, he said.

But he does think the trials will make more building owners realise they have a social responsibility to generate green and renewable energy. The NEA’s document sets targets for distributed solar installations on industrial and commercial buildings, and residential buildings in rural areas. Li said: “All companies will see that, sooner or later, they’re going to end up with solar panels, and the government encouragement may mean those who saw it as unprofitable get on board. That means we can win new business as the policy rolls out.”

Droves of local governments have applied to run trials, but small and medium-sized enterprises have some concerns. One commenter on the NEA website asked how the government would protect the interest of small-scale solar installers, who are at risk of being frozen out as county governments sign up with larger firms.

The NEA replied that trials should be run competitively, rather than as monopolies, and be market-led, with all suitable companies able and encouraged to participate in bidding.

The NEA also pointed out that local governments can choose whether and how many trials to run, and that there is no requirement to gain NEA approval. The reply also explained the government’s role: it is to coordinate resources, rather than take over the entire process. The building owners should choose contractors freely, via the market. Also, the trials should not cause any ongoing approvals processes or grid connections to be paused or delayed.

The publicly available data so far shows that most local governments have opted to use state-owned enterprises to develop distributed solar. But as few such enterprises have previously done this in their own right, many are choosing to cooperate with private firms. “Currently I haven’t heard of any local governments signing exclusive agreements which lock other firms out,” said Li Hui.

As China’s energy mix shifts to renewables, how can power markets evolve?