Over half of Cambodia’s electricity is generated in coal power plants, almost all built with Chinese involvement. Coal’s share in the energy mix was set to increase to three-quarters by 2030. Then came President Xi Jinping’s September announcement that China “will not build new coal-fired power projects abroad” and will step up support for green energy. The new stance may help Cambodia transition toward a more reliable and affordable electricity system, at a time when the country needs a green economic boost given Covid-19. It can also help Cambodia retain its largest industry, garments and footwear. Major international brands operating in the country have made requests for a cleaner energy grid.

Cambodia’s power system has proven highly adaptable over the past 20 years. At the turn of the century, only 17% of the population had access to the grid, and the system was three-quarters powered by fuel oil. By 2014, this had switched to nearly two-thirds hydropower, all of it built with Chinese involvement. Seven years later, Cambodia has a remarkably improved electrification rate of 93% and is in the middle of another transition, with over half of its power now coming from fossil fuels. Plans approved after power shortages in 2019 catalysed a return to fossil fuels, which were expected to supply 75% of power by 2030.

That was the plan at least. Now Cambodia may need to adapt again: depending on how Xi’s announcement plays out in practice, planned projects may be at risk. Our analysis shows Cambodia’s coal power capacity is projected to reach 4,675 megawatts (MW) within the next 10 years. Of that, only 675 MW is operational, and over 900 MW is under construction. The remaining 3,100 MW, two-thirds of the planned capacity, may be at risk, including the 2,400 MW which is supposed to be imported from projects planned in neighbouring Laos.

China’s announcement was well received around the world. It came amid a global energy crisis, with gas and coal prices soaring. Europe, for example, is having difficulty securing energy supplies for heating and electricity at the expected prices. The International Energy Agency (IEA) has pointed to insufficient investment in renewable energy, stating that US$4 trillion is needed by 2030, in order to remain on track for the Paris Agreement’s 1.5C warming limit. Increased financing and capacity would also help alleviate supply crunches.

Can Cambodia have an affordable power supply without proceeding with its unbuilt coal projects? Thanks to the ever-dropping prices of renewables, the answer is yes.

What does this mean for Cambodia’s ability to create a secure, reliable and affordable power system? A great deal, actually. Cambodia has the opportunity to support much-needed investment to grow green out of the pandemic, to create jobs, lower electricity costs, and to improve the independence and supply security of its energy.

Concerning security, Cambodia’s current power plan needs huge imports of fuel and electricity, exposing it to a variety of geopolitical risks. Cambodia’s coal power fleet depends on imports, with power purchase agreements linked to the price of imported coal. This means its utility supplier, Électricité du Cambodge (EDC), has to pay more when global coal prices are high. In the last 18 months, prices have dived and soared, reaching both the lowest and highest they’ve been for 15 years. And gas prices are 10 times the level they were a year ago.

Can Cambodia have an affordable power supply without proceeding with its 3,100 MW of unbuilt coal projects? Thanks to the ever-dropping prices of renewables, the answer is yes.

In Cambodia, solar and wind power are the cheapest source of new power supply, with sale prices to EDC between 3.9–6.9 cents per kilowatt hour (kWh), well below the proposed coal-power purchase price of 7.7 cents per kWh for the 2,400 MW Lamam and Xekong thermal power plants. Analysis for the Ministry of Mines and Energy’s renewable energy working group, seen by EnergyLab Cambodia and updated after President Xi’s coal announcement and the global energy crisis, shows that replacing this unbuilt coal power with solar, wind and some non-mainstream hydropower, as well as fast-responding battery storage and gas engine plants, would actually lower electricity system costs for Cambodia and ensure reliability.

Gas turbine plants are built to optimise fuel efficiency. They use closed-cycle turbines that run optimally at full output.

Gas engine plants, which operate through expansion or combustion of gas, have lower fuel efficiency and emit more pollutants. But with their rapid response and lower capital cost, they can work better in a system that needs to balance solar and wind.

If Cambodia’s electricity system takes on more solar and wind power because they are cheaper, is it possible for the country to secure a reliable system with power plants that depend on the weather? Again, yes. This is supported by modelling done by the renewable energy working group, which was referred to by the Australian ambassador to Cambodia at this year’s Cambodia Climate Change Summit.

The traditional idea of having big fossil-fuelled power stations producing constant baseload power output has been turned on its head. Now, everything should be done to bring in low-cost solar and wind, balancing out its variability with flexible, dispatchable power and using widely available weather and power forecasting technology. Flexible and dispatchable power comes from sources such as batteries, hydro storage and fast-responding gas engine plants, and through flexible demand management. By contrast, coal plants are not flexible at ramping up or down, or responding quickly to system changes.

New gas power projects must be designed for energy and system balancing only, and not for high-output baseload power; this balancing is where the quicker response available from a gas engine plant will be important. In Cambodia’s system, balancing is needed for hydro seasonality and lower solar output as the sun sets. 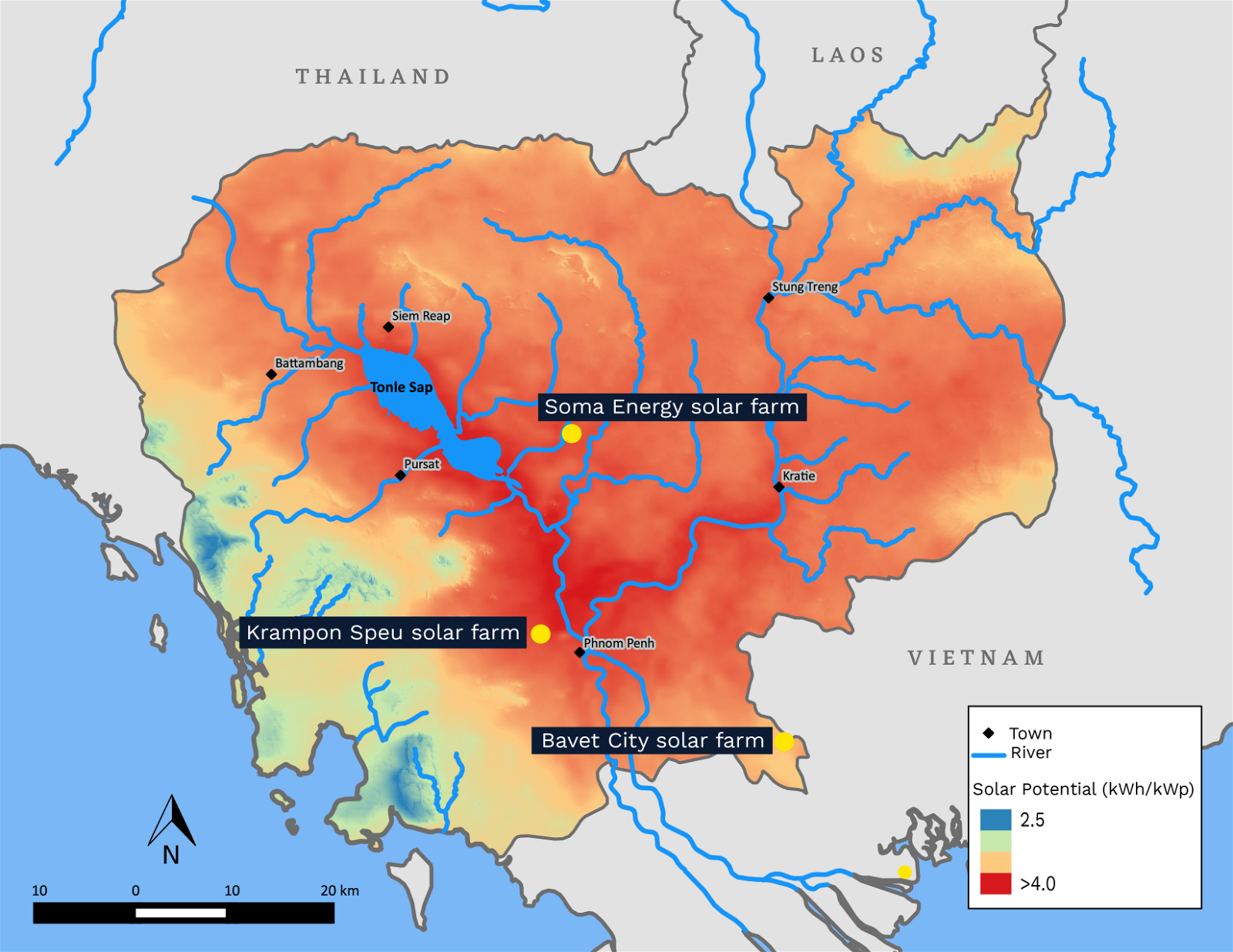 Diversity of the system will be key over the next 10 and 20 years. Cambodia can replace the unbuilt, unfinanced coal plants with a combination of solar, wind, hydro, gas engine plants and storage to maintain the same level of renewables share it has now – half. The planned 2,400 MW of coal projects in Lao PDR dedicated for supplying Cambodia can be replaced by domestic investment, saving US$16.4 billion in power import costs up to 2040; an estimated investment of US$6.8 billion could fund the creation of 10 gigawatts (GW) of solar and 1.5 GW of wind power capacity.

Higher shares of renewable energy will support global industries investing and operating in Cambodia who are under pressure to decarbonise their supply chains. Last year, major international clothing brands in Cambodia such as H&M, Puma, Adidas, Nike and Gap requested a higher share of renewables in the energy mix. They have made global renewable and climate commitments to their customers and they remain alarmed by the plans to further carbonise Cambodia’s grid. The garment and footwear sector represents over 800,000 jobs and around US$8 billion in annual export revenue.

Cambodia can have a cheaper, more reliable and more secure power system with less coal. It is imperative that planning and investment start as soon as possible. Chinese companies and investors are involved in almost all of Cambodia’s 410 MW solar power projects in the country, and they are now exploring wind power. They are also global leaders in battery storage.

China’s Eximbank has invested extensively in Cambodia’s transmission grid infrastructure. As countries like Vietnam, Canada and Australia have been learning, grid infrastructure planning for more solar and wind is essential. These countries were slow to develop transmission lines to bring low-cost solar and wind to demand centres, often resulting in wasteful “spilling” of renewable electricity. Planning for rooftop solar, consumed onsite at factories, can also help with transmission and distribution costs.

In his announcement against building new coal projects abroad, Xi also said “China will step up support for other developing countries in developing green and low-carbon energy”. A move away from coal towards a higher share of renewables could see Cambodia become a major beneficiary of Chinese investment and expertise in green energy for years to come. With the China–Cambodia free trade agreement ratified by the Cambodian National Assembly last month, and an updated investment law prioritising incentives for green energy, it looks like the future of Cambodia’s electricity system could be getting brighter – and greener.

Without new foreign investment, Indonesia should hit the brakes on coal expansion