The London-based think-tank Carbon Tracker is calling for vulnerable states that rely on oil to receive more support as the world decarbonises.

It believes urgent policy action is needed to mitigate the impacts on the countries that could be worst-hit economically by declining demand for oil over the next two decades.

After modelling several scenarios, the think-tank has warned that seven countries – Angola, Azerbaijan, Bahrain, Timor-Leste, Equatorial Guinea, Oman and South Sudan – could see a greater than 40% government revenue shortfall over the period. A further 12 countries are vulnerable to a potential shortfall of over 20%. Together, the 19 are home to over 400 million people.

Action taken on an international level could help these petrostates prepare for a future with less demand for hydrocarbons.

“Some of these countries are quite poor and they don’t have the systems in place to prepare themselves,” said Carbon Tracker analyst Axel Dalman.

Three of the 19 – Chad, South Sudan and Nigeria – score low on the UN’s Human Development Index, a composite based on life expectancy, education and per capita income.

“Technical assistance is needed in a lot of these petrostates because a lot of resources are not currently being used in a way that makes them resilient for the future,” said Dalman. One option would be to create sovereign wealth funds and invest the proceeds from petrol when prices are high to save the windfalls. But the countries are likely to need guidance on investing this money and on complex processes such as designing new tax systems or creating long-term fiscal plans.

This is something that countries from the developed world can help with, along with supranational organisations such as the International Monetary Fund. Blue-sky ideas include pooling gains from carbon taxes in the developed world and sharing them with countries trying to diversify so that both sides benefit from the energy transition.

“These may be difficult, but they are not totally out of reach,” said Dalman.

The Carbon Tracker study used the International Energy Agency’s (IEA) Sustainable Development Scenario (SDS) and an assumed flat real long-term oil price of US$40 a barrel up to 2040 as a model for a “low-carbon demand” scenario.

The SDS envisages a significant transformation of the global energy system in which the world delivers on the IEA’s three main energy-related Sustainable Development Goals simultaneously. These are achieving universal access to energy, reducing the severe health impacts of air pollution and tackling climate change.

The study compared the “low-carbon demand” scenario to an “industry expectations” model based on the IEA’s Stated Policies Scenario that assumes a long-term oil price of US$60 a barrel.

Under the low-carbon scenario, total global government oil and gas revenues would be 51%, or US$13 trillion, lower over the next two decades compared with the “industry expectations” scenario.

According to Carbon Tracker, the average petrostate central government debt nearly doubled from 24% of GDP in 2010 to 46% in 2018.

The think-tank believes income from the sovereign wealth funds will mitigate risks for some of these countries in the short term, but significant reform will still be critical over the next decade to avoid spending these funds too early.

As the world becomes increasingly less reliant on hydrocarbons, there is no “one-size-fits-all” solution for petrostates.

However, diversification and restructuring are two of the key strategies that Gulf Cooperation Council (GCC) countries have implemented.

Saudi Arabia, for instance, has significant resources for deploying renewable energy and has a goal of producing 50% of its electricity renewably by 2030. 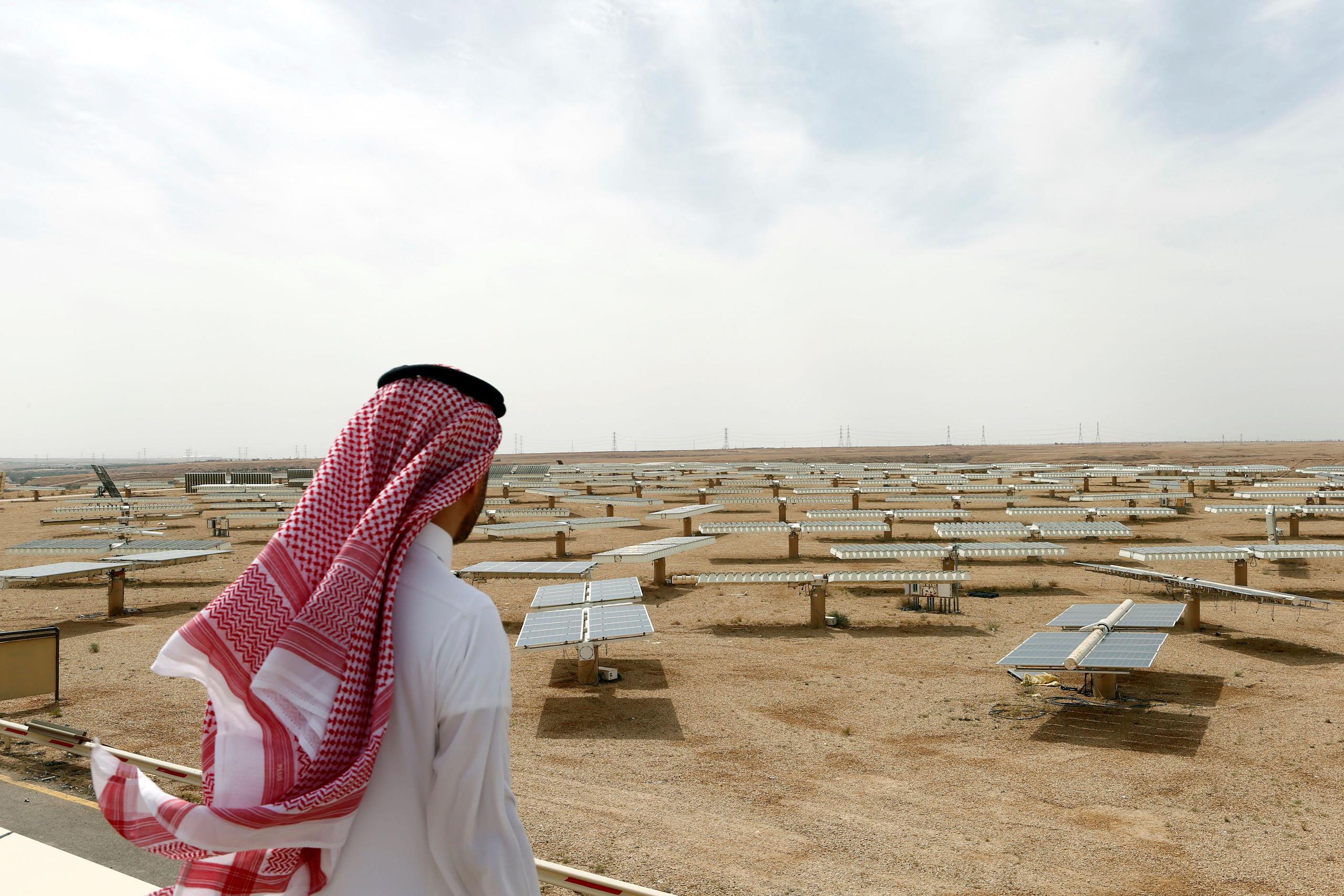 Saudi Arabia aims to generate 50% of its power from renewables by 2030 (Image: Alamy)

Countries with fewer financial resources, weaker institutions and less non-fossil-fuel-based domestic industry are likely to find it harder to replicate such strategies.

The World Bank recently made a series of recommendations for economies highly exposed to drops in oil revenues in a book called Diversification and Cooperation in a Decarbonising World: Climate Strategies for Fossil Fuel-Dependent Countries.

One of its key recommendations was to invest in projects that support the non-oil economy rather than new oil and gas infrastructure projects.

It said national oil companies should be steered away from reinvesting their earnings into new high-cost projects that may end up wasting public money. Instead, governments should direct capital into public investment funds that support the non-oil economy.

While the “low carbon demand” scenario in the Carbon Tracker report paints a bleak picture for the global oil and gas sector and the world’s most un-diversified petrostates, its authors say the outlook for the next 20 years is by no means certain.

“Currently, most mainstream forecasters are forecasting something that is between both the ‘industry expectations’ scenario and the ‘low-carbon demand’ scenario that we have outlined,” said Dalman.

“However, over recent years, many forecasters have been adjusting their predictions, and generally they are trending towards the ‘low-carbon demand’ scenario and away from the ‘industry expectations’ one.”

Some countries are more vulnerable than others, and policymaking needs to take this into account.

Another factor that could make the real-world impact of the energy transition dramatically different from the Carbon Tracker modelling is the impact of political and security issues that the study doesn’t consider in any depth.

For example, Bahrain’s strong political relationship with Saudi Arabia and other neighbouring countries in the GCC could make it less vulnerable to lower oil prices than a simple analysis of its oil and gas revenues suggests.

GCC countries have already gone to great lengths in recent years to support Bahrain’s economy. In 2018, Saudi Arabia, Kuwait and the United Arab Emirates agreed to give Bahrain US$10 billion to support its funding requirements as it embarks on a programme to eliminate its budget deficit by 2022.

If a future economic crisis hits Bahrain, it seems likely that its allies will step in again to assist it.

“Bahrain matters too much to Saudi Arabia to allow it to enter into an outright crisis,” said Richard Bronze, an analyst at Energy Aspects. “We saw that during 2011 in the Arab uprising.”

“The concern for the Saudis is that sectarian issues within Bahrain could spill over into the Shia communities in eastern Saudi Arabia, which is home to most of Saudi Arabia’s oil and gas fields.”

While Bahrain may benefit from its political relationships amid a sustained low oil-price environment, Iraq’s political and security problems could make it more vulnerable.

Iraq is currently struggling with an economic crisis and escalating security issues as groups supported by various international sponsors launch regular attacks on each other.

These groups include Shia militias that look to Iran for leadership, and remnants of Islamic State that are now waging asymmetrical warfare within Iraq.

If Iraq ends up facing a prolonged period of lower oil and gas prices, its ability to contain these groups could be weakened, leading to attacks on energy infrastructure and disruption to activities in the oil and gas sector.

Some countries are more vulnerable than others, and policymaking needs to take this into account. “The trends and the relative differences between countries are key,” said Dalman.

Despite the inherent uncertainty within the global oil market and international politics, Carbon Tracker’s modelling highlights trends that need to be addressed by well-designed policies to avoid a disorderly transition that could lead to even greater government revenue shortfalls.

‘Without a carbon cap, you can’t provide strong support for a carbon peak’

Bangladesh may ditch 90% of its planned coal power

Does coal still have a role in China’s decarbonising power market?