In the past two years, China’s offshore wind power has increased more than any other nation.

A Global Wind Energy Council report on offshore wind in 2019 described the year as the best yet for the sector – and the biggest ever for China’s offshore wind capacity. China and the Asia-Pacific region look set to drive growth in the sector for the coming decade.

The Covid-19 pandemic is not stopping the rush to build new turbines. The Chinese Wind Energy Association says at the end of June that China had 11 GW of offshore wind under construction. Meanwhile, Guangdong, Fujian and Zhejiang have given “key provincial project status” to another 14 GW of planned capacity. 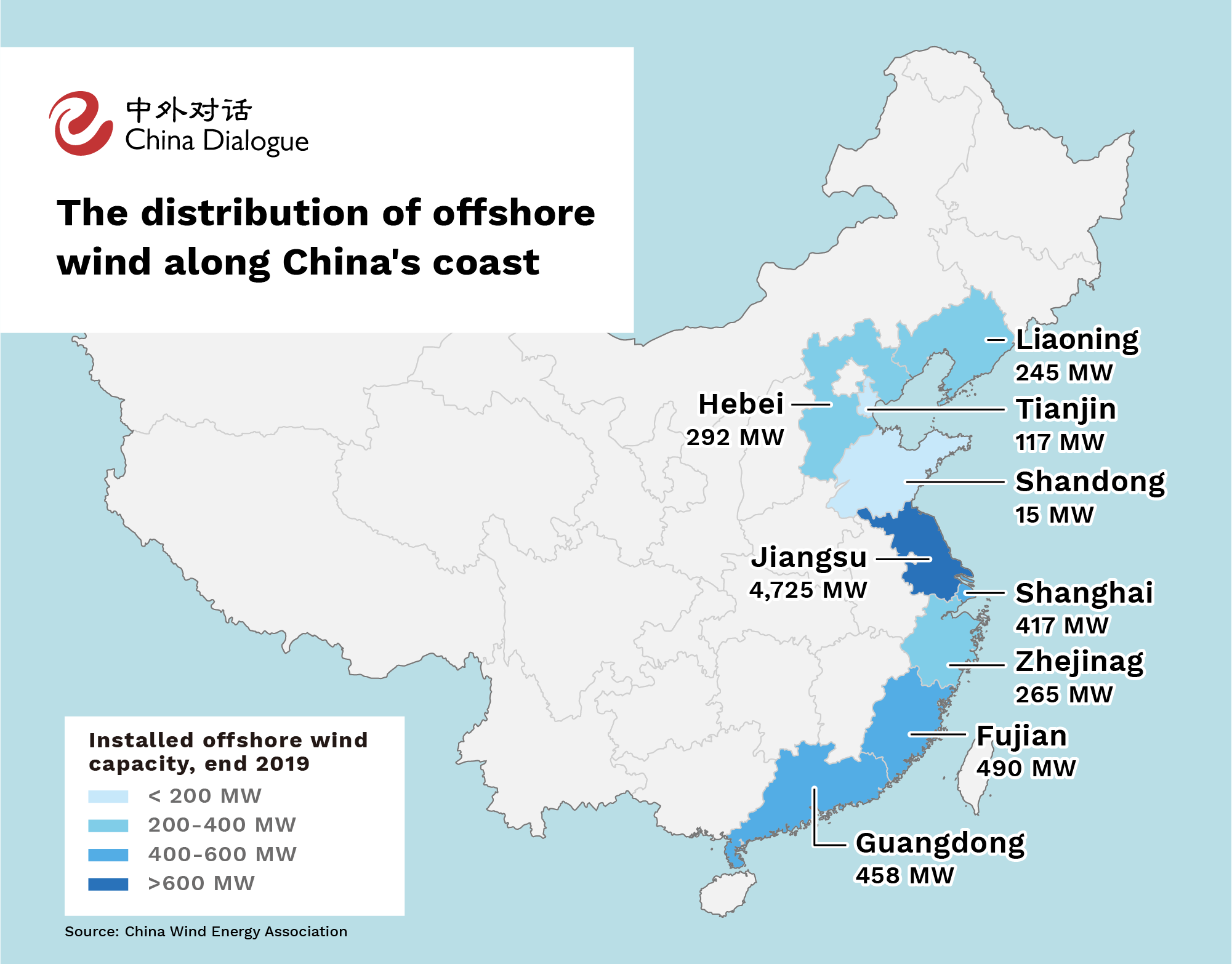 According to the report, China will add a further 52 GW of offshore wind capacity by 2030, for a total of 58.7 GW. Globally, governments are set to use offshore wind as a driver of post-pandemic economic growth, and both governments and industry are working to grow the sector: The US Wind Energy Association is calling for an extension to tax breaks to help businesses weather the pandemic, while Germany has said it will waive fines for late project completion. The report estimates the sector will create 900,000 jobs in the next decade and continue to grow.

Ma Lifang, an expert with the China Renewable Energy Industries Association, said: “Onshore wind had been enjoying rapid development, but the three main regions for wind power – north-west, north and north-east China – are approaching saturation, with fewer sites available and wind power being curtailed. So the wind power sector is now looking to distributed and offshore wind.”

Offshore wind has some advantages over onshore. Firstly, China’s 18,000km coastline borders over 3 million square kilometres suitable for wind power development and receives ample wind. According to a report by the China Renewable Energy Engineering Institute (CREEI) on renewable energy development in China, coastal wind power resources are concentrated on the south-east coast and China’s islands where there is energy density of 300 watts per m2 or more. There is 190 GW of potential capacity at a height of 100 metres above sea level where water depths are between 5 and 25 metres – and 320 GW at depths of between 25 and 50 metres.

Secondly, China’s economic activity is concentrated on its coasts where there is greater demand for power. By contrast, onshore wind generates mainly in the north of the country and needs to be transported long distances to reach consumers. China’s 11 coastal provinces accounted for 53% of national electricity use last year.

Finally, because offshore wind does not take up land or greatly affect local residents, it is possible to build larger turbines.

As with the country’s solar and onshore wind sectors, offshore wind relies on policy support.

China set its first tariff for coastal wind power in 2014. At 0.85 yuan per kilowatt hour it was far higher than the average of 0.42 yuan paid for coal-fired power. With a generous and reliable tariff, the sector grew quickly. At the end of 2016, the National Energy Administration published a plan for wind power development during the 13th Five Year Plan period, setting a target of 10 GW of offshore wind power to be installed or under construction by 2020, with an aim of having more than 5 GW of that connected to the grid. Guangdong, Jiangsu, Zhejiang and Fujian were to construct at least 1 GW each. China’s 11 coastal provinces started planning for offshore wind expansion and developers got to work on preparing projects.

Liang used Guangdong as an example. One of China’s most developed provinces, Guangdong would like to reduce its reliance on electricity imported from western China and speed up improvements in its energy mix. The province is an important centre for nuclear power, but as building nuclear involves long approvals and construction processes, other sources of clean power need to be developed for a rapid transition. The province has a long coastline with good wind resources, and as offshore wind farms can be built near coastal cities, it is easier to deliver and use the power generated. “That’s why Guangdong has become a hotspot for offshore wind these last two years. They’ve identified it as having the most potential of all renewable energy sources,” Liang said. 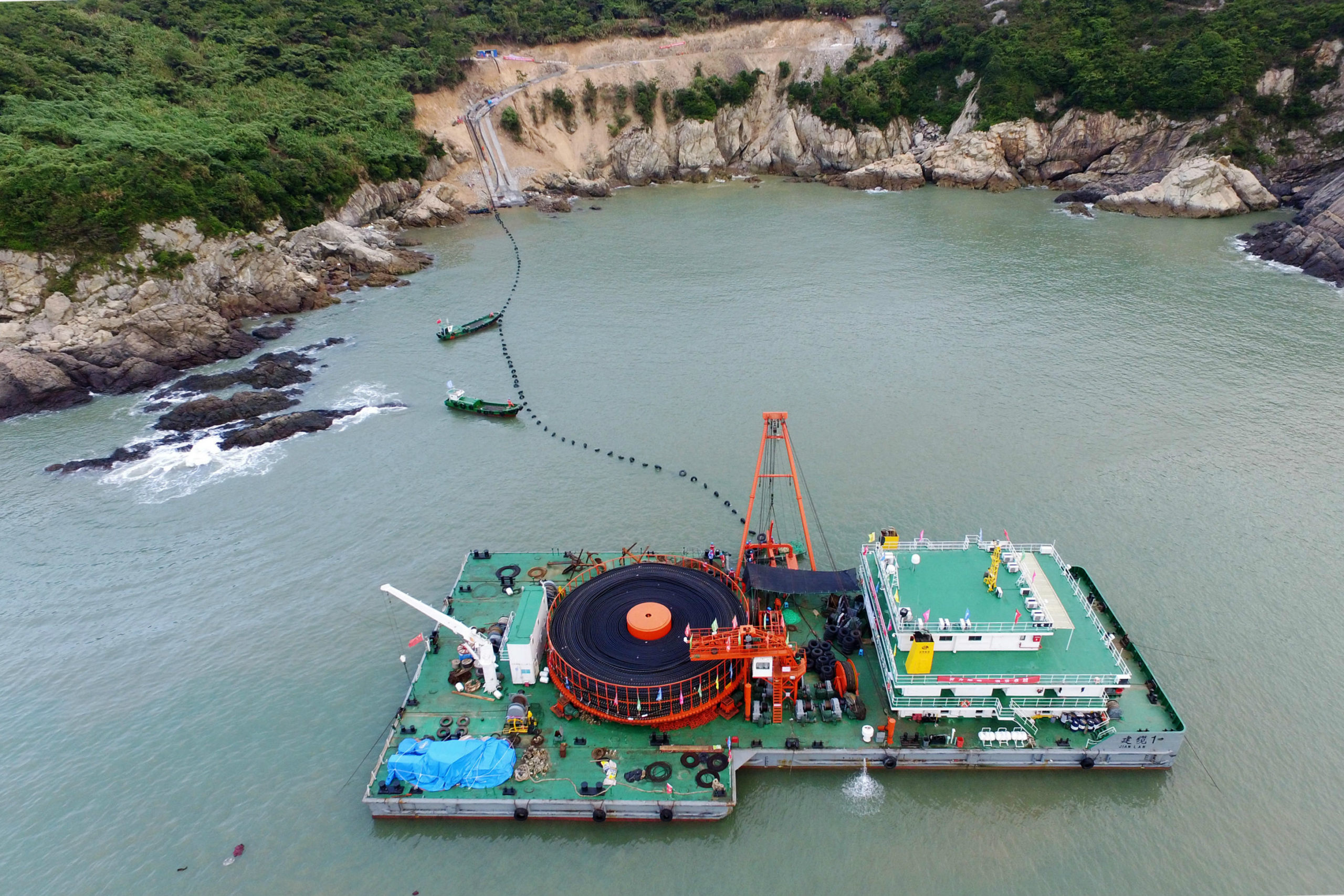 Along with policies, innovation has played a key role in the evolution of Chinese offshore wind power.

In the early days, China relied on imported offshore wind turbines. Differences in the nature of the seabed and the risk of typhoons meant that turbines imported directly from Europe weren’t always suitable, which increased engineering costs. So designs were improved during the process to meet China’s needs, meaning better reliability and lower costs.

China’s offshore wind developers have been reducing manufacturing costs and increasing power output and quality through the development of larger blades and turbines.

Liang Wanliang explained that larger turbines usually make more economic sense. “With a 10 MW project, you might install two 5 MW turbines. But a single 10 MW turbine cuts spending on the foundations, cables, installation and operating costs.” It depends on conditions, he added: Europe’s North Sea enjoys high wind speeds but does not suffer from hurricanes, so larger turbines make sense. But some Chinese waters, such as the Jiangsu and Shandong coasts, have lower wind speeds and turbine utilisation hours aren’t very high. Also, the shallower waters mean foundation costs are lower so smaller turbines may be more economical in some cases.

Over the last two years, the government has responded to wind power expansion and falling costs by adjusting its policies for the sector.

In May 2019, the government changed its offshore wind tariff from a set price to a guide price, with tariffs for newly approved projects to be set competitively – and at no higher than the guide price of 0.80 yuan per kilowatt hour. A new stage of competition had arrived, with subsidies weakening. In 2020, that guide price was reduced to 0.75 yuan and the government announced that, with the exception of projects approved before the end of 2018 and connected to the grid by the end of 2021, new wind power capacity would not receive central government subsidies from 2022. This has led to a short-term rush as developers get their wind farms connected to the grid before the cut-off point for subsidies at the end of 2021.

Qin Haiyan, secretary of the China Wind Energy Association (CWEA), is worried about a sudden drop off in growth once the subsidies end. At the Global Wind Energy Council’s 2020 Global Offshore Wind Summit China in August, he proposed a number of “post-subsidy” support mechanisms, including having power grid firms bear the cost of grid connections and transmission, to be factored into power tariffs for end users, and establishing offshore wind funds to reduce the costs of long-term financing. He thinks another five years at current growth rates could see the cost of China’s offshore wind power drop by 40% – at which point it could compete with other forms of energy. Liang Wanliang, meanwhile, told China Dialogue that he hopes the government will continue to offer some supporting policies once subsidies end: “Maybe not high subsidies, but more targeted subsidies, or other support, are necessary to ensure offshore wind does not see a sudden fall-off.”

The greening of China’s industrial strategy