Two months before the Paris climate agreement was reached in 2015, local communities and NGOs in Turkey wrote to François Hollande, the French president, asking the French utility Engie to cancel a coal project.

The civil society groups explained the harm the new Ada coal project would have on Iskenderun Bay, in southern Turkey’s Adana province. They demanded the French government take responsibility, as the host of the UN climate summit, and redirect French investments and finance in Turkey to energy efficiency and renewables. Three weeks later, Engie announced it would stop its new coal projects globally, starting with the one in Adana, and turn its investments in Turkey towards renewables.

Five years after the local communities’ sigh of relief, they are asking Chinese officials to do the same thing again with the Hunutlu EMBA coal project.

The 1.3 gigawatt coal plant is China’s biggest foreign direct investment in Turkey, and a key project for both the Belt and Road Initiative (BRI) and Turkey’s Middle Corridor – a large infrastructure initiative that Turkey’s government sees as complementing the BRI.

There are already three coal plants in Iskenderun Bay and other polluting industrial facilities are based there too. With one in five premature deaths in Adana linked to air pollution, people are concerned that the Hunutlu coal plant will further worsen the air quality.

When Engie cancelled its project in Turkey, the country had more than 70 new coal plants in the pipeline, of which 29 were planned for Iskenderun Bay. Only three of the 70 planned projects have become operational and more than half have been shelved. As of June, there were 32 still in the pipeline but only Hunutlu is under construction.

Public opposition to coal projects in Turkey, driven by concern about pollution, has been effective. The president responded to public campaigns by vetoing a law in 2019 that would have extended exemptions for certain coal plants from environmental regulations. As a result, five of those coal plants’ operations were suspended in January as they did not comply with environmental measures.

The coronavirus pandemic has brought into sharper focus the link between coal power and pollution. Zonguldak, one of the major coal cities in Turkey, was locked down because high levels of lung disease in the city put residents at heightened risk.

Other factors too are making coal power less appealing, including economic turbulence, the devaluation of Turkey’s currency, rising energy costs, unexpectedly low energy demand, the competitiveness of renewables, and oversupply of electricity in the market.

Due to the growing budget deficit, which is mainly driven by energy imports, the government has responded by providing special subsidies for local lignite power plant projects. But even these highly subsidised projects, which have price and power purchase guarantees, have not received the investor attention expected. 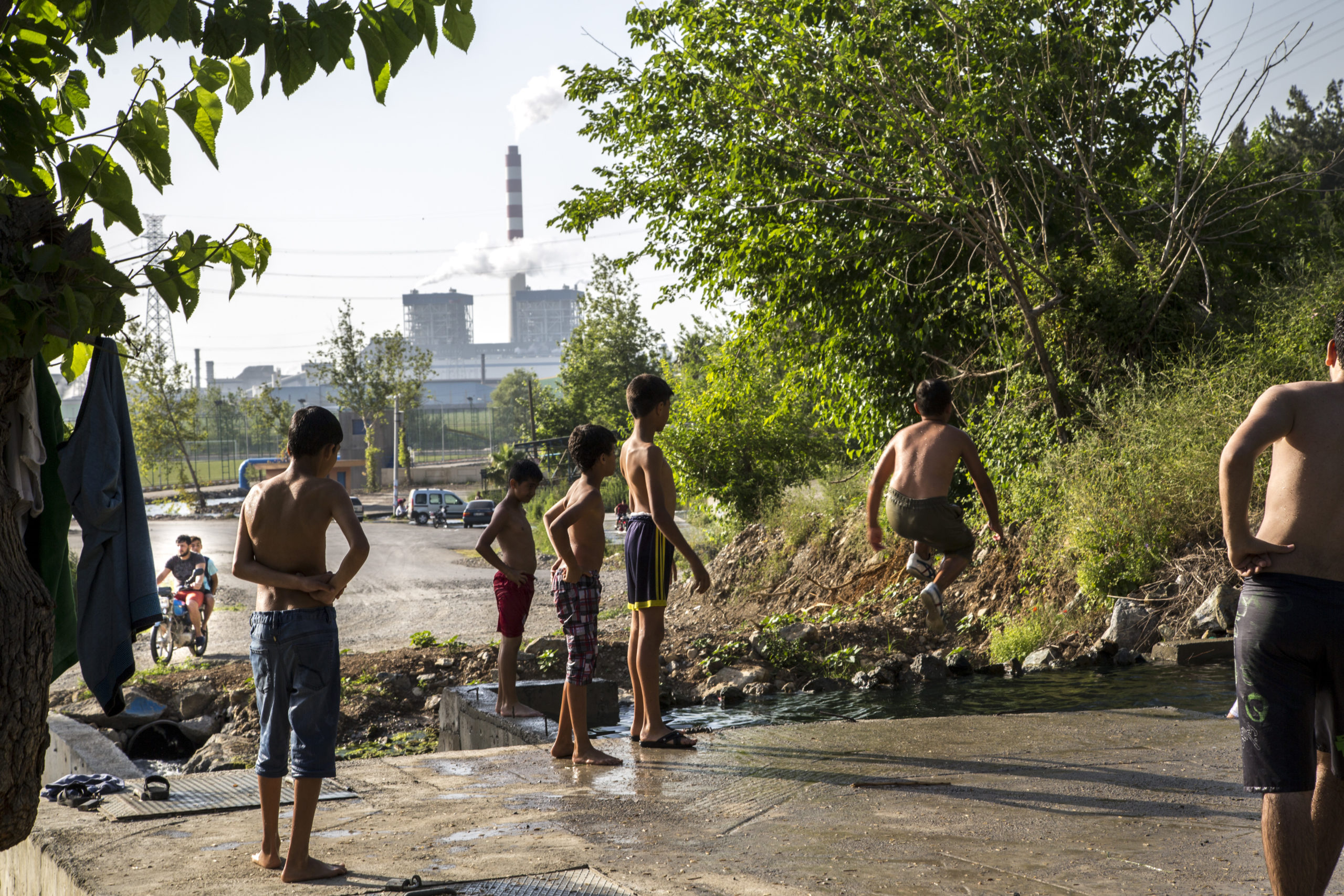 The people of Sariseki village, Iskenderun, live squeezed between the Atlas coal plant and other industrial facilities (Image © Kerem Yücel / CAN Europe)

Unfortunately, troubles in the coal sector have not resulted in better government policy. The Turkish government is one of the few yet to ratify the Paris Agreement and despite the country’s vast potential for wind and solar power, it has been slow to seize the opportunity.

Clear climate and energy policy plans for 2030 and 2050 are needed to give solid signals to the energy market, with an ambitious pathway indicating when the country’s carbon emissions will peak.

This is possible. According to its Energy Vision, Turkey aims to produce 30% of its energy mix through renewable sources by 2023. On 24 May, 90% of the country’s electricity generation came from renewables. The minister of energy and natural resources announced that this was a record, paving the way for increasing Turkey’s renewable energy share even more. Recent analysis demonstrates that Turkey could increase the share of solar and wind energy to reach 21% by 2026, without any negative impacts on the Turkish grid, suggesting that Turkey could overshoot its renewable energy target if adequate policies were put in place.

Turkey has initiated its own Middle Corridor, reclaiming its historic trade route connecting Asia and Europe on the Silk Road, as a separate, but parallel project with the Belt and Road Initiative (BRI).

The Turkish government believes that integrating the Middle Corridor into the BRI will be a “win-win” strategy for both countries, which signed an agreement in 2015 to link the two initiatives.

Chinese finance for renewable projects is expected to increase in Turkey in the near future as part of the BRI. China could accelerate the shift to low-carbon power in Turkey by signalling an intention to carry climate leadership into the BRI rather than pursue high-carbon projects such as Hunutlu.

The European Green Deal may help

The European Green Deal – the EU Commission’s landmark project – is based on a commitment to climate-neutrality by 2050. The roadmap proposes the adoption of a Climate Law, and the reduction in emissions by up to 55% by 2030.

Turkey’s relationship with the EU is complicated and its accession process has been bumpy but the country is on a path to adopt the EU acquis – the common rights and obligations binding to EU nations – on certain sectoral policies.

As candidate countries advance in their negotiations to join the EU, the latter’s sectoral policies are opened as chapters of the acquis to be adopted. These chapters are concrete steps that accession countries must take to join the EU. Chapter 27, on environmental and climate change policy, was opened to Turkey in 2006.

The Instrument for Pre-Accession (IPA) is a part of the EU’s external budget and is used to prepare accession candidates to meet the obligations associated with EU membership. Turkey has been given substantial funds to adopt measures to align its environmental legislation with the EU’s. These funds have been used, for example, to develop Turkey’s Water Law in accordance with the EU’s Water Framework Directive. The Industrial Emissions Directive, the main EU instrument regulating pollutants from industrial facilities and setting emission limits, was partially adopted by Turkey in 2014.

EU Commission president, Ursula Von der Leyen, has said that the Green Deal “will be the motor for recovery” from the ongoing health and economic crises. So, as the EU embeds sustainability and a low-carbon economy into the EU budget, future IPA funds will be used to reward accession countries that align themselves with the EU’s agenda.

IPA funds do not constitute the only source of money from the EU to Turkey. As an emerging economy, the country has also been the biggest recipient of climate finance from the European public banks, EIB and EBRD.

Moreover, Turkey was the EU’s fifth-largest trading partner in 2019, and Turkey’s main export market is the EU (42.4%). As one of the new measures to avoid carbon leakage, the EU has proposed a carbon border adjustment mechanism that would help avoid cheaper imports from countries with less strict climate policies. Within Turkey’s high-carbon industries, there is already discussion about the need to prepare for potential negative impacts.

Recent studies also point out that electricity generated by coal in neighbouring countries leaks into the EU’s grid, undermining the EU’s emission reduction efforts. There are proposals to extend the carbon border adjustment mechanism to put a price on electricity imports. This would incentivise Turkey – a country with an oversupply of electricity that is increasing its interconnection with the EU grid – to boost the share of renewables in its energy mix.

In the run-up to the UN climate talks in Glasgow next year, joint climate leadership efforts by the EU and China can help both Turkey and countries in the Western Balkans ratchet up their ambition. These nations are in the process of joining the EU and are keen to attract Chinese investments as part of the BRI. With the climate summit postponed, countries in the region should put in place roadmaps to emerge from the current crisis with a green, low-carbon, ambitious agenda that’s in line with the EU’s Green Deal. China can help realise this by shifting its finance away from coal projects and towards an economy-wide just transition to climate neutrality.

Bangladesh may ditch 90% of its planned coal power