China and India are the two largest emerging economies and their economic development has been fuelled primarily by coal. And lots of it. China burns more of the black stuff than any other country, with India ranking third.

But the countries are also racing to develop other types of energy resources. Currently, India has about 32 gigawatts (GW) of wind power and 12 GW of solar power within a total generation mix of 320 GW. Renewables (excluding large-scale hydropower) account for about 17% of its total power output.

In comparison, China has 149 GW of wind and 77 GW of solar – far ahead of its neighbour, although with less renewables as a proportion of installed capacity because its energy mix, at 1,646 GW, is more than five times greater than India’s.

But while China got off to an early lead in renewables, India is looking to catch up over the next ten years. So which country will be crowned the greenest? 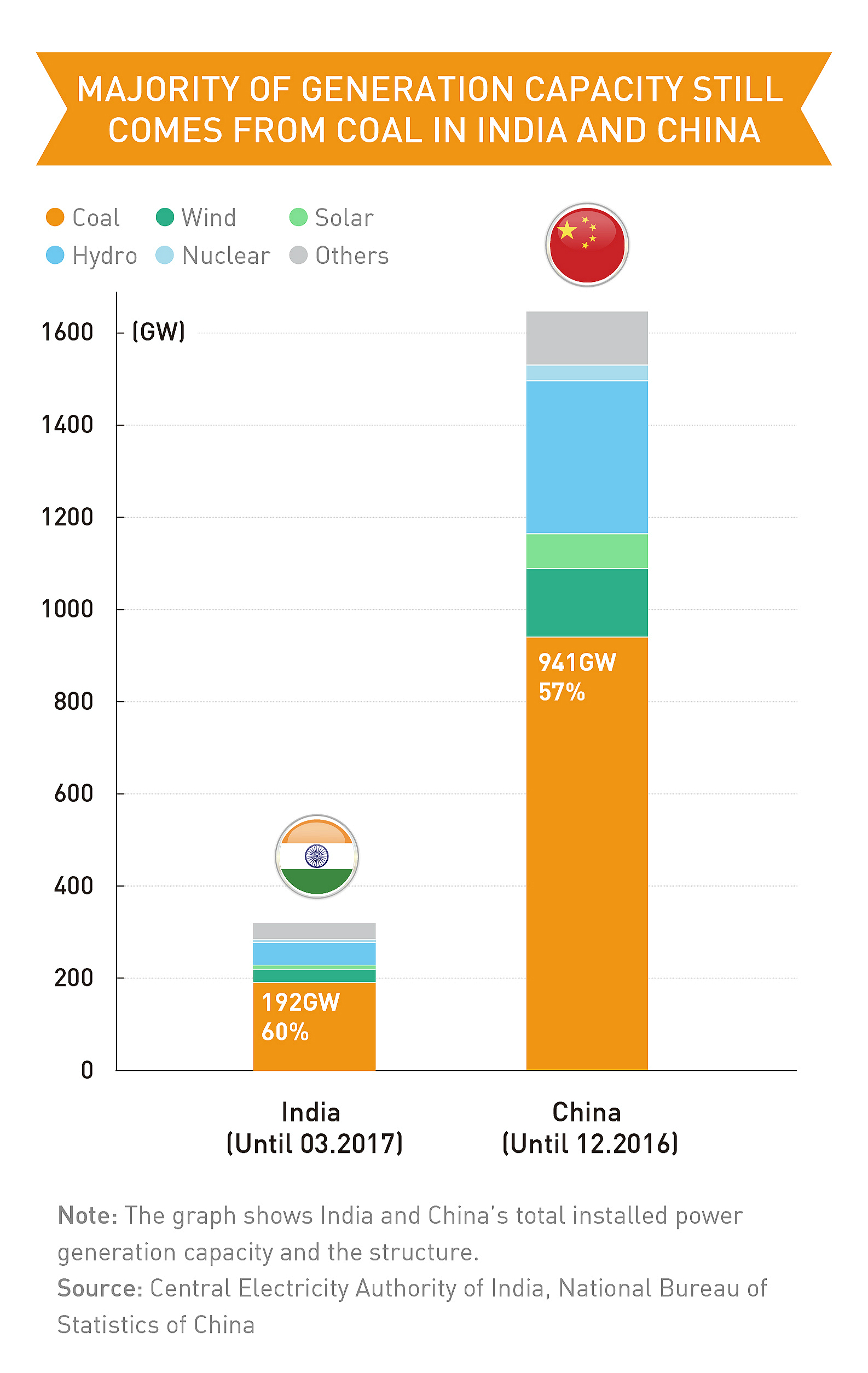 Plans at the ready

The countries also publish separate plans focused specifically on the national power sector. In November, China published its Energy Plan for 2016-2020. Meanwhile, the Indian Ministry of Power has published a five year National Electricity Plan (NEP) since 2007. It  published its draft 3rd NEP report in December 2016.

That draft made a number of predictions and suggestions for how India could meet electricity demand during the current 13th (2017-2022) and then 14th (2022-2027) five year periods. The Indian government is expected to approve a final version soon.

Given that the planning periods between the two countries are closely aligned, this provides an opportunity to compare their respective energy strategies.

Coal out, renewables in

India’s draft NEP affirms a strategy of rapid renewables expansion. It aims to have 175 GW of renewable capacity installed by 2022, meaning an additional 100 GW of solar power and 60 GW of wind power.

Over the five year period, this will result in a ten-fold growth in solar power, equivalent to an annual increase of 60%; while wind capacity will double. The plan also estimates that by the end of the 13th FYP period (2027), India will have 275 GW of renewables. In comparison, China’s 13th FYP electricity and energy plans aim to have 110 GW of solar and 210 GW of wind capacity online.

So if India can meet its targets, it will go from having less than a seventh of China’s solar power capacity to being almost equal within five years. 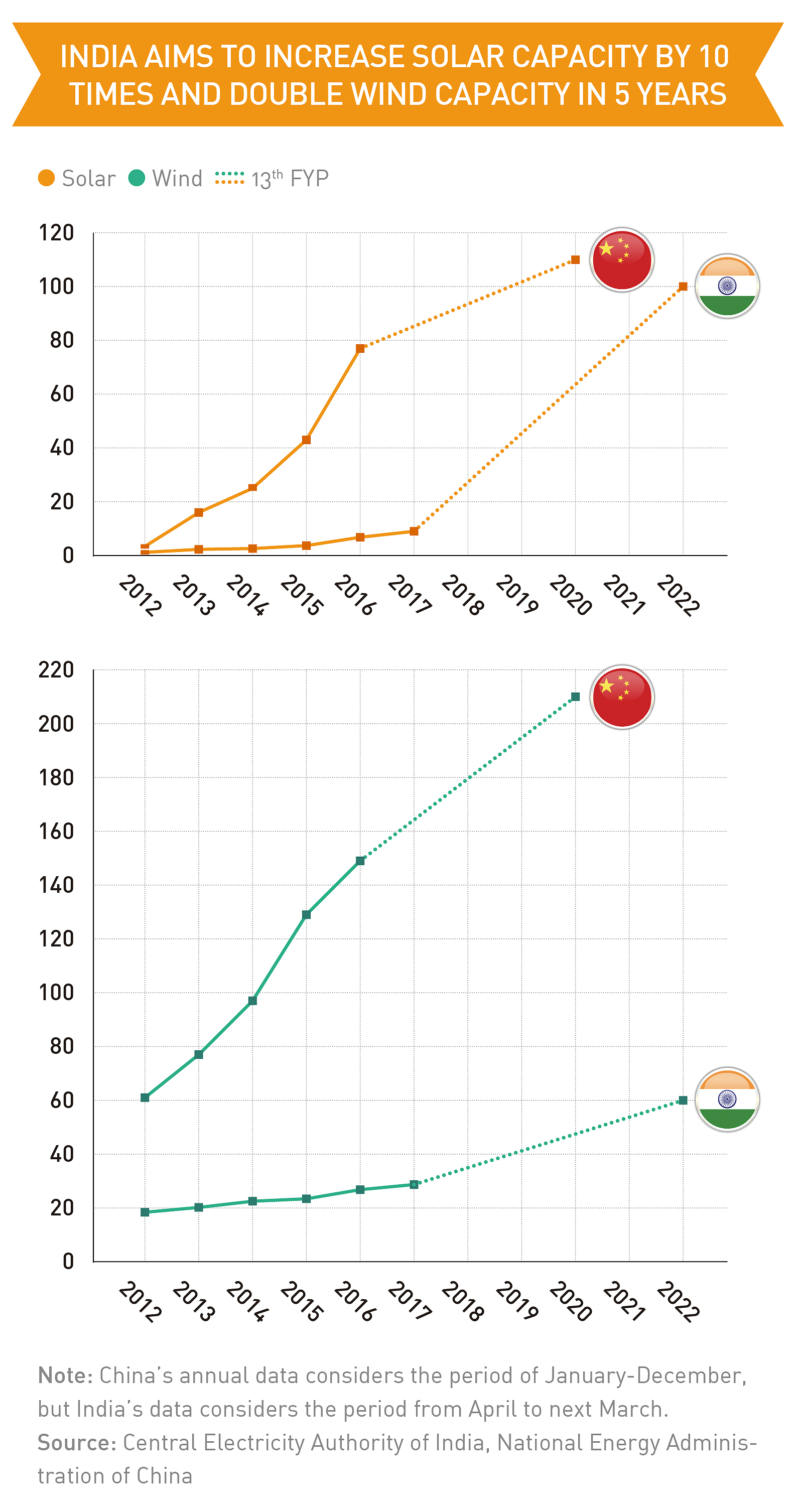 And India isn’t just bolstering its renewables targets, it also plans to weaken the position of coal in the energy market. The National Electricity Plan estimates that India will need only 44 GW of new coal power capacity to ensure it can meet electricity demand between 2022 and 2027. But with 50 GW already under construction, the country could build no coal power plants in the coming decade, and still have a 6 GW capacity surplus.

Overall, India’s plans will see it develop 248.5 GW of coal power by 2022, whereas China, which has also placed a strict limit on coal power, will cap capacity at 1,100 GW. 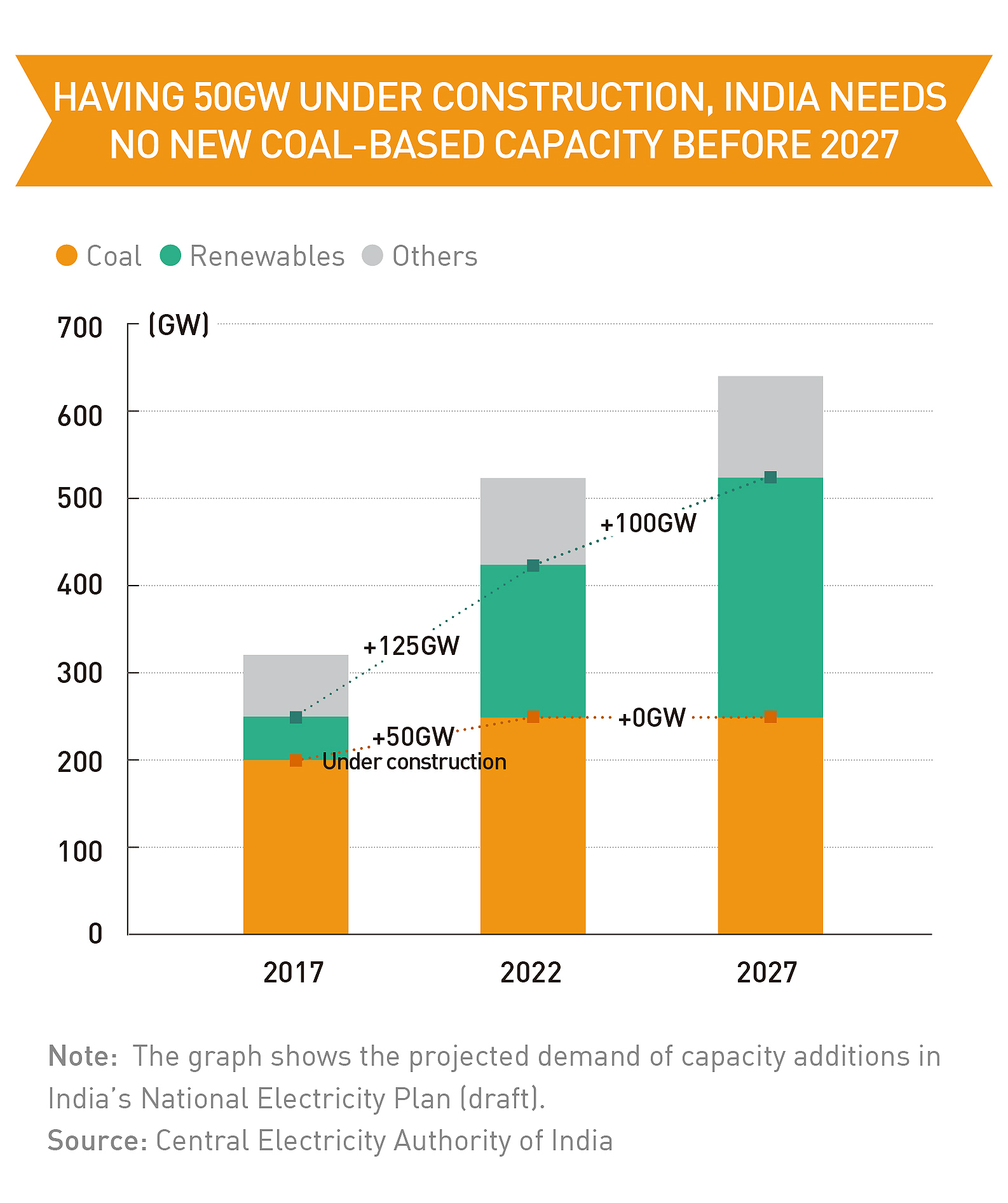 With renewables expanding and growth in coal power slowing, India estimates that non-fossil fuel sources will account for 47% of domestic energy capacity by 2022, with the share of coal power falling from 60% to 48%. By 2027 renewables could increase their share further to 56.5% of total power capacity.

Non-fossil fuel generation is also expanding in China but will do so more slowly. By the end of China’s 13th FYP (2020), 39% of the country’s power generation will be from non-fossil sources, while coal power will account for 55% of generation.

So if everything goes to plan then India will draw a higher proportion of its power from non-fossil fuel sources and so be greener and less carbon-intensive. But its non-fossil fuel generation capacity will still be less than one third of China’s. 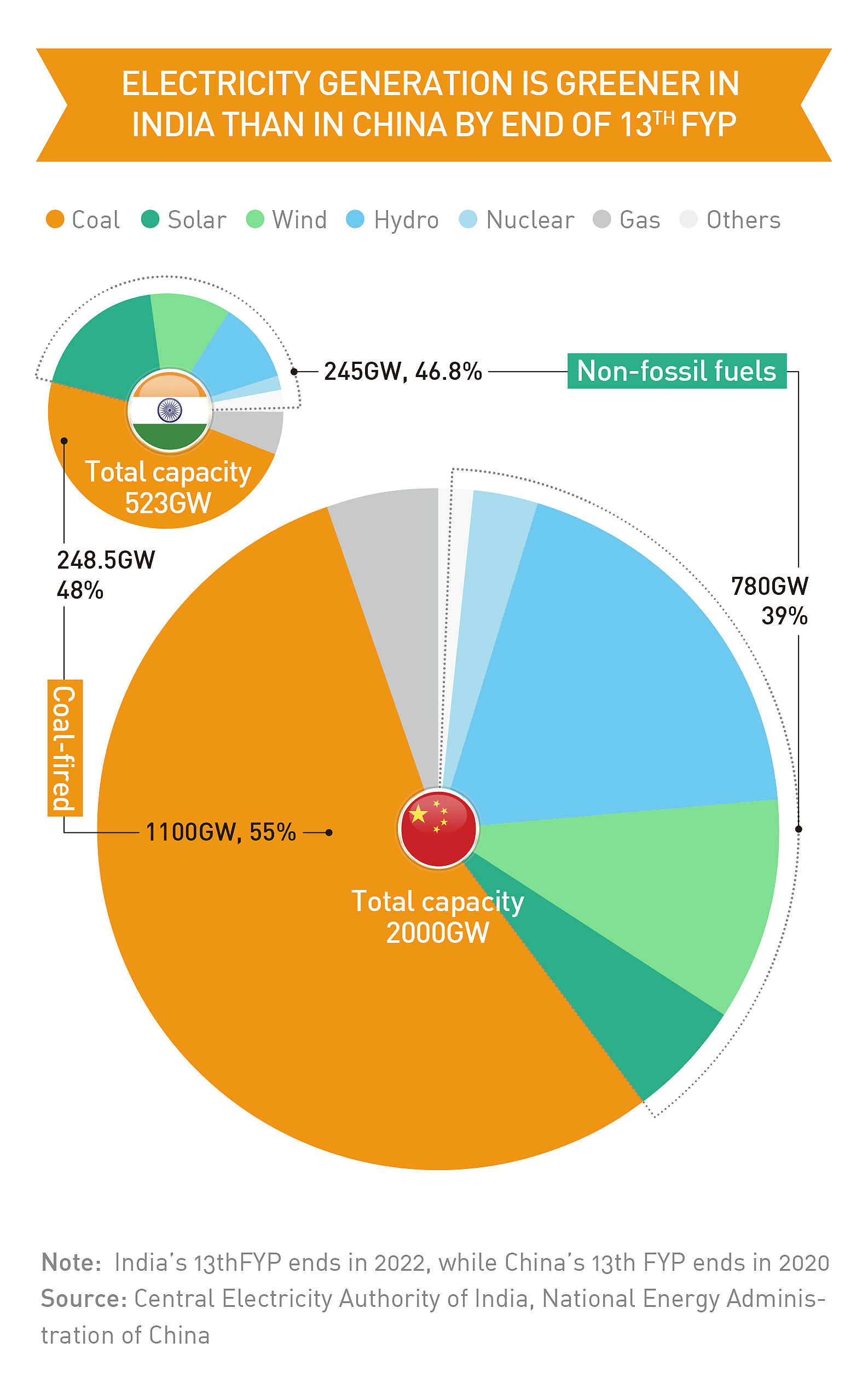