Than Bayar Khon village sits nested in the foothills of the Bago Yoma forest in central Myanmar. The low mountains, once heavily forested with teak and valuable tropical timbers, are now rapidly balding.

Despite being only a few kilometres from the major highway connecting the port city of Yangon with the capital Naypyidaw, the three hundred fifty families living in the village had no access to electricity until recently and relied on gathering charcoal and firewood from the forest for cooking.

Now this is changing. In 2015 the Chinese NGO Global Environment Institute teamed up with an alliance of Myanmar NGOs and the Blue Moon Foundation to provide small household solar panels and clean cook stoves to families in the village. This initiative aims to protect the teak forests, provide clean electricity and support local livelihoods.

“Most villagers live on the margins,” said Thet Paing Phyo project manager at Spring Foundation, GEI’s local partner. “Only 10-20% of people own land and others go to work in mines in Kokang [near China], to Thailand, or in the plantations.”

The A4 size solar panels and battery packs can power a light bulb or charge a phone. “Now people can use lights to work at night. Children are happy they can charge their mobile phones and be connected to the outside world,” said the head monk over tea on the floor of the monastery.

GEI and Spring Foundation have also provided training to villages in agroforestry, homestead planting, how to produce products for local markets and accounting, Phyo explained, as we walked through bamboo woven houses and past neat gardens of medicinal plants, passion fruit vines and betel trees.

The struggles of Than Bayar Khon village encapsulate Myanmar’s profound energy crisis, where only 34% of people have access to electricity through the grid, falling to 16% in rural areas. Almost all the rural population rely on firewood for cooking, a major driver of deforestation in Myanmar, the government claims, which has the third highest rate in the world.

GEI’s involvement in rural Myanmar is unique in a country where officials and citizens alike are increasingly vocal about concerns over Chinese-funded infrastructure projects and the extraction of natural resources, including timber, by Chinese companies that have signed deals with the military and its cronies.

Since the suspension of the controversial Myitsone dam on the Irrawaddy River in the face of nationwide opposition, the Chinese embassy in Yangon has been trying to encourage companies to pay more attention to their image and reach out to local communities. But tokenistic efforts, such as tree planting, have done little to soothe deep wounds. A scathing Amnesty report published in February revealed the failure of Chinese mining company Wanbao to address ongoing human rights abuses at the Letpadaung copper mine in central Myanmar. The recent destruction of a Chinese owned textiles factory by striking workers in Yangon is just the latest manifestation of simmering anger over China's influence in the country. 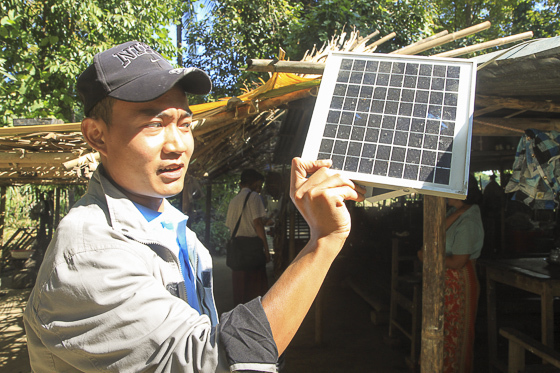 A4 size solar panels and battery packs can power a light bulb or charge a phone (Image: Beth Walker)

Against this difficult political backdrop, GEI’s work in Myanmar has caught the attention of the Chinese government, which is now partnering with the NGO to deliver one of China’s first climate aid initiatives.

China has pledged to provide 20 million yuan (US$2.9 million) worth of solar panels and clean cook stoves to Myanmar through its South-South Cooperation Fund for Climate Change. The fund was set up in 2014 in the run up to the UN climate conference in Paris as a sign of China’s commitment to supporting developing countries to adapt to climate change and lead the global transition to a low carbon future.

“Myanmar is one of the most vulnerable countries to climate change,” said Xie Zhenhua, China's chief climate negotiator, at a ceremony in Myanmar’s capital of Naypyidaw in March. “China got help from the international community, now we are relatively developed we’re willing to share technology, best practices and provide climate finance,” he said.

At the event, China’s National Development and Reform Commission, its top planning body, handed over 10,000 cook stoves and 5,000 solar panels to Myanmar’s Ministry of Natural Resources and Environmental Protection to be dispersed among remote communities.

“Our cooperation with Myanmar demonstrates the kind of cooperation needed after the Paris Agreement that can make a difference and mobilise common people to adapt,” said Xie Zhenhua.

Chinese officials gathered at the event expressed the hope that China’s cooperation with Myanmar would create a model for the fund’s future work and expand to multilateral cooperation in the long run. “This is the way to meet the Paris Agreement with or without US and developing countries,” said Zhang Jiqiang, chairman of GEI’s executive board.

While the fund is a top down approach to China’s climate diplomacy, the government is reaching out to Chinese civil society and entrepreneurs to ensure its success.

“GEI have played an important coordination role in promoting climate adaptation in Myanmar and building relations with local NGOs. We hope for more civil society and business involvement in the future – building a bridge for South-South cooperation,” Xie said.

GEI was one of the first Chinese NGOs to operate abroad and takes an interesting approach to climate adaption. The Beijing based NGO is working with five local NGOs in four different sites in Myanmar using a community conservation model developed through their own experiences working with poor communities in northwest China, inspired in turn by a Peruvian initiative. They aim to stimulate rural economic development at the same time as reducing vulnerability to climate change – such as drought and floods – and supporting conservation.

“When we went to work in rural villages in Myanmar we found they were in the same conditions as China 20 years ago,” said Zhang. While solutions can’t be transplanted, China’s experience developing rural enterprises and energy solutions, such as biogas, cook stoves and heating solutions, offer useful lessons for countries like Myanmar. GEI have helped communities in Tibet bring environmental friendly products to high-end consumers, and farmers in Nepal export organic rice to international markets.

“In the future we can use e-commerce and market tools to help people sell their goods – like we have in China. This project is just the beginning of the story to help create a green economy in this country,” Zhang said.

In Myanmar’s Than Bayar Khon village this has involved setting up a solar powered water pump for irrigation and a community development fund, which villagers all contribute to depending on how much they can afford. So far the money has been used to maintain the solar pump and there are plans to use it to extend irrigation to neighbouring fields and boost the number of annual crops. But when I visited at the tail end of the rainy season, the pump lay abandoned.

The challenge now is to find ways to support and encourage village enterprise said U Zaw Win, director of the Spring Foundation: “The best way to increase access to energy is to build village solar systems not just household – so there is enough to power small industry”. Wandering around the village, I notice some disconnected panels. “60% of households have bought their own solar panels now,” explained Thet Paing Phyo. The GEI panels can only provide power for two hours a day and many families now want more powerful equipment.

In neighbouring Ye Aye village, the NGOs are supporting the village committee to apply for community land ownership – a difficult and daunting process – so they can move beyond subsistence farming and start plantations for firewood without having to use protected forest. 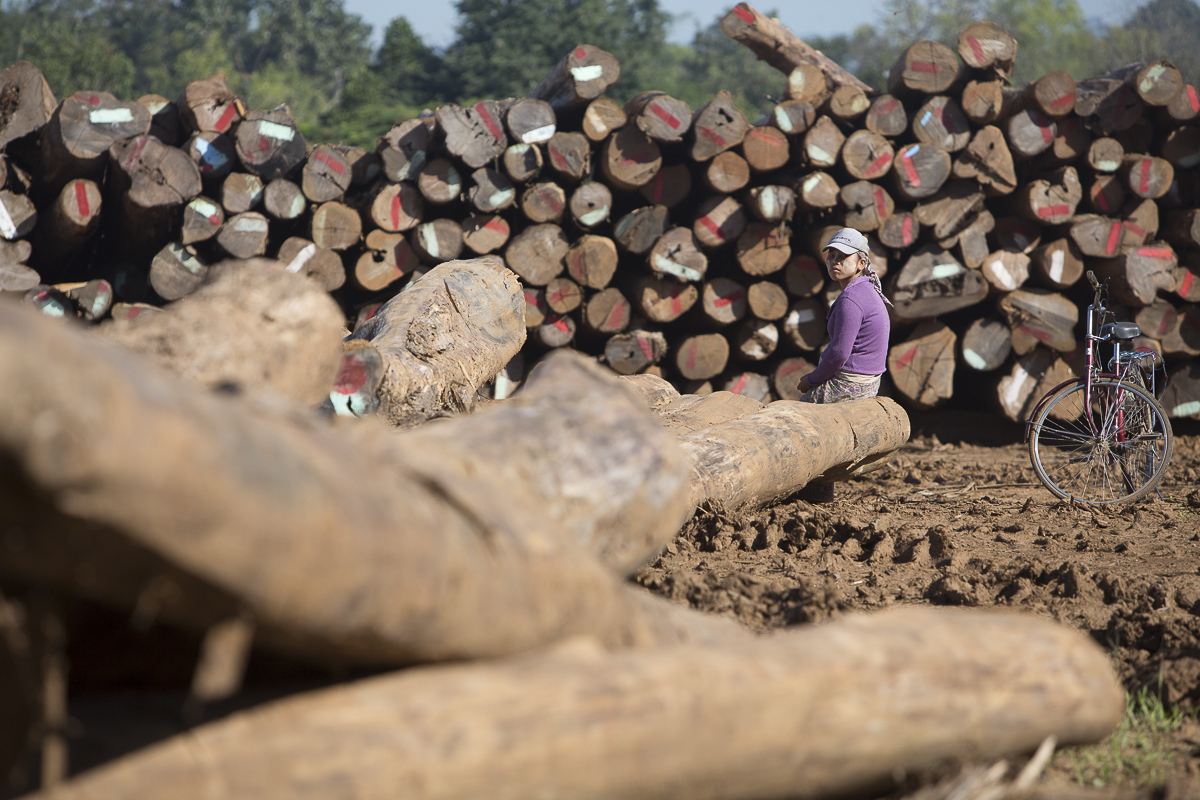 Myanmar's forests are threatened by illegal logging across the border to China and India (Image: Chris Davy)

Foraging for firewood is not the only threat to Myanmar’s forests. Illegal logging to feed demand across the border in India and China is the biggest culprit, admits U Zaw Win. He worked for decades with the Ministry of Forestry and the Myanmar Timber Enterprise, the state company blamed for the worst forest looting in the past and now says he wants to give something back to support the local communities.

It was China’s excessive logging activities overseas that first brought Jin Jiaman, director of GEI, to work in Myanmar. Since 2005 she has worked closely with the Chinese government to develop guidelines for companies and held workshops and study trips for forestry officials in Myanmar and China. In 2015 the Myanmar government announced a one-year nationwide logging ban and a ten year ban in the Bago mountains, one of the worst affected areas. However, sources within the timber industry say that extraction continues, exacerbated by conflict between the military and armed ethnic groups in the forested borderlands.

Hundreds and thousands of small household solar systems are bought every year to power homes, monasteries and village businesses – mostly from China. However, the equipment is poor quality and soon breaks, Aung Myint explained.

China could help Myanmar leapfrog traditional energy infrastructure and support the decentralised wind, solar and micro grid solutions being sidelined by the government and traditional donors such as the World Bank, said Aung Myint. “We want to work with qualified Chinese companies, but they need policies from the government. The government has to specify standards and materials to restrict bad materials and incentivise good installation systems,” he said.