Rare earth metals, hard-to-find materials, with unfamiliar names such as lanthanum, neodymium and europium, are used in wind and solar energy projects, but dwindling supplies could hinder a roll-out of low carbon technologies and slow China's shift away from coal power.

These compounds, which are highly toxic when mined and processed, also take a heavy environmental toll on soil and water, posing a conundrum for policymakers in China, the world’s biggest producer and consumer of rare earths.

In 2012 the Chinese government named the city of Ganzhou, in the southeastern province of Jiangxi, a “rare earths kingdom”; even though at that time its rare earth reserves were already almost depleted.

According to a rare earths white paper issued by the State Council News Office in 2012, the reserves to extraction ratio for rare earth elements in southern China was 15. In other words, if mining continued at the existing rate, those reserves rich in medium and heavy rare earth elements (MHREEs) would only last for another 15 years.

Three years later and 6,000 miles away in Paris, 190 countries signed the historic Paris Climate Agreement, including plans to introduce a greater share of wind and solar power in a “decarbonised” future. But few of the delegates gathered in Paris seemed to realise how important one small south-central Chinese city would be to achieving this target; as almost all the clean, smart and low-carbon technologies are reliant on rare earths.

This prompts the questions: do we have enough rare earths to build the clean and smart future we’re imagining; can China, supplier of 90% of the global rare earths over the last 20 years, meet expected growth in demand; and what will the environmental consequences be.

Despite rapidly depleting reserves Ganzhou still accounts for more than half of all MHREEs produced in China. 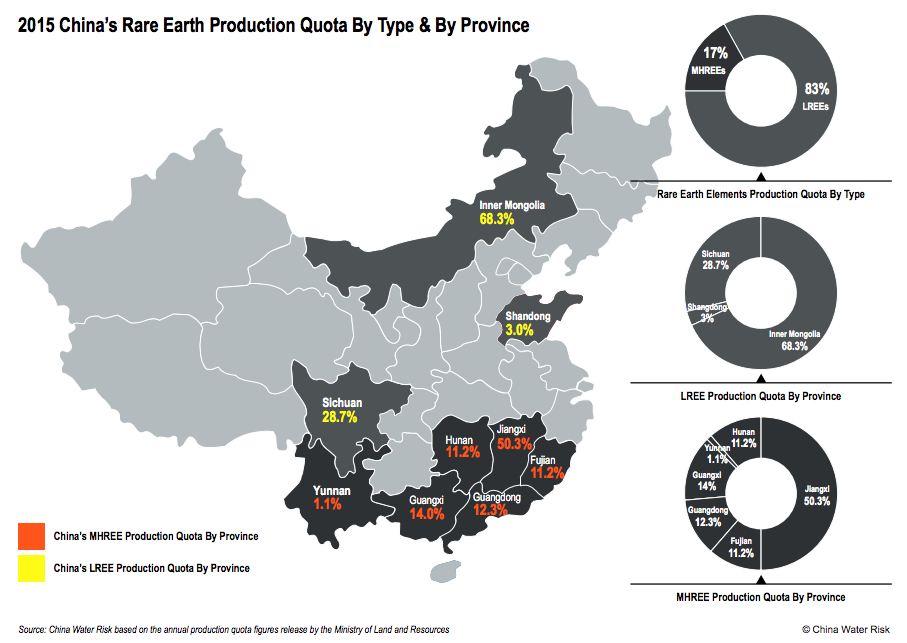 A visit to the mines and industrial parks of Ganzhou gives no sense of a glorious “kingdom”. It’s a scene of devastation: crude open air mines and smelters, and rough muddy attempts at restoring the landscape. It’s a sight hard to associate with the environmental technologies that rare earths are used in.

Water in and around the mining area is severely polluted. According to China Environmental News, the water supply for 30,000 people in the county of Longnan alone has been affected by rare earth mining, with 40,000 mu (6,589 acres) of farmland seeing reduced yields or complete harvest failure.

Over a decade of excessive extraction has left the surface water in the Zudong mining area, China’s biggest source of ion-absorption rare earths, with ammonia and total nitrogen levels far above safe standards; while groundwater is nowhere near up to minimum drinking water standards.

In April 2012 a cross-ministry investigation headed up by the Ministry of Industry and Information Technology found 302 abandoned rare earth mining sites in Ganzhou, with 97.34 square kilometres affected. It would take 70 years just to deal with the 190 million tonnes of mining waste left behind. 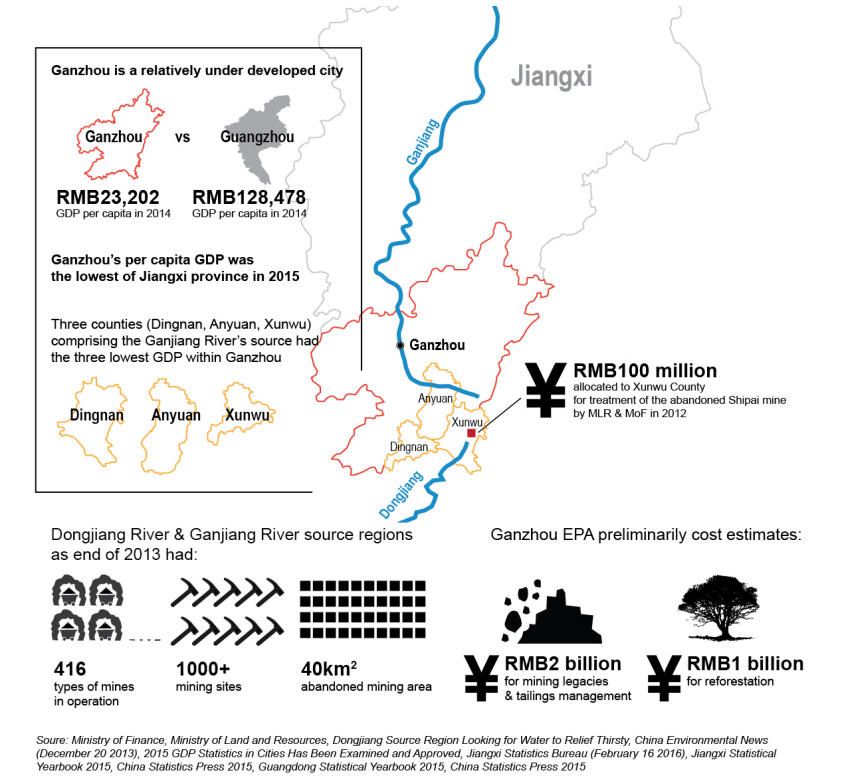 China’s government says the country “meets 90% of the world’s demand for rare earths, but has only 23% of global reserves.” In the early 1990s China overtook the US to become the world’s biggest producer and exporter of rare earths and since then has virtually become a monopoly supplier, with some rare earth products produced only in China. If you trace them back to the source the vast majority of fluorescent lamps, off-shore wind turbines, electric and hybrid cars, smartphones and personal electronic devices have, thanks to the rare earths used in their components, “Chinese DNA”.

According to the US Geological Survey, at one point China was accounting for 98% of global rare earth output. In 2015 that figure still reached 85%.

China plays an even bigger role in the world's rare earth trade than is apparent on the surface because of its black market. The main importers who benefit from China’s rare earths production, such as the US, Korea and Japan, as well as the manufacturers and brands who use rare earths in their products, often tap into a substantial black market in rare earths. Every year tens of thousands of tonnes of rare earth ores are illegally mined and traded, leaving China through the black market.

Those higher up the supply chain turn a blind eye to this, and international cooperation on law enforcement is minimal. With no international traceability system, such as that for conflict minerals, companies have no way of monitoring supply chains and we cannot know if the electric cars we drive or the smartphones we use contain illegally mined and smuggled rare earths.

The huge profits to be made means Ganzhou is plagued by illegal mining. The China Rare Earth Industry Association estimates that in 2013 the actual supply of rare earths in southern China was over 50,000 tonnes, and over 40,000 tonnes in 2014. However the Ministry of Land and Resources only permitted output of 17,900 tonnes per year for that period. That means the black market may be two to three times the size of the legitimate market.

And rare earth mining, whether legal or not, entails shocking environmental costs. Research has found that producing one tonne of rare earth ore (in terms of rare earth oxides) produces 200 cubic metres of acidic waste water. The production of the rare earths needed to meet China’s demand for wind turbines up to 2050 (in a scenario of radical wind power expansion) will result in the release of 80 million cubic metres of waste water – enough to fill Hangzhou’s West Lake eight times over. Not to mention the emissions from the rest of the product lifecycle; smelting, separation, processing, transportation.

Business, policy-makers and consumers all need to think again: what actions can we take to ensure we meet our low-carbon goals in a way which is friendlier to both the environment and the climate? It is after all both contradictory and unjust to sacrifice public health and the environment in a resource-producing area for the sake of low-carbon development. 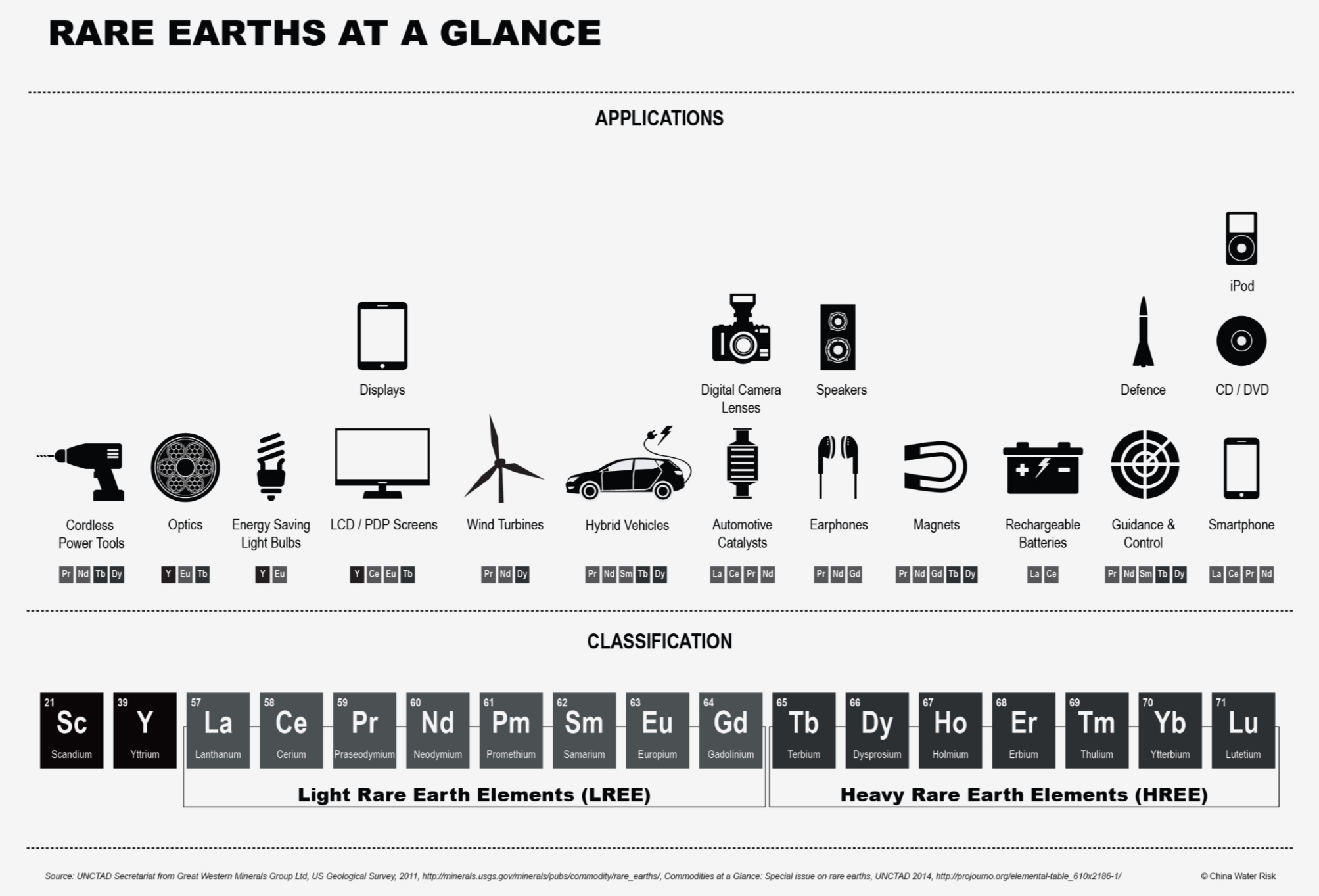 New challenges in a post-Paris era

In April over 170 countries visited New York to sign up to the Paris Agreement, buttressing attempts at “decarbonisation”.

That means now is the time to look again at the link between China’s rare earth resources and the clean, low-carbon and smart technologies relying on those.

Over the last 20 years the environment has paid the price for China’s economic successes.

The country’s rare earth reserves are much depleted; environmental costs in the trillions of yuan have not been factored into market prices; and a rampant black market in rare earths, both at home and abroad, has exacerbated environmental damage and the loss of resources.

This has left the Chinese government with no option but to cover huge environmental remediation costs, while those living near rare earth mines are directly or indirectly suffering environmental and health problems.

Another issue is that China is no longer simply a supplier and exporter or rare earths as domestic demand for these resources has increased sharply. China is the main driver of global investment in wind power. In a scenario for radical expansion of wind power produced by the National Development and Reform Commission’s Energy Research Institute, China could see installed wind power capacity of 2,000,000 megawatts (2 terawatts) by 2050. A typical 2 megawatt turbine contains 341-363 kilograms of the rare earth neodymium and about 59 kilograms of dysprosium.

The quantities of rare earths needed just to allow for wind power growth are astounding, and this is before the increased rare earth demand arising from the “China Manufacturing 2025” plan, which aims to prioritise development in electric vehicles, marine engineering equipment and astronautic and aeronautic manufacturing, are considered.

China may not even be able to meet domestic demand, never mind increasing demand from other nations. According to UN Conference on Trade and Development estimates, global demand for rare earths will be between 200,000 and 240,000 tonnes annually by 2020, with 70% of that demand coming from China. Even if China makes full use of its entire mining quota, there is still a gap of 35,000 to 63,000 tonnes between new annual output and expected growth in demand. How will that gap be met?

Looking at rare earths throws up other unanswered questions about our low-carbon future. How will all that waste water be handled? Will there be new drinking water safety issues? Will the costs of better technology and management, intended to reduce emissions, be reflected in rare earth prices?

Back in 2014 the Chinese government declared a “war on pollution”, which was followed up by “history’s toughest” environmental protection law and standards for the rare earth industry on emissions and the use of water and energy. This means compliance costs for the industry are bound to rise; low-cost rare earth mining and processing are a thing of the past in China. EU and US research bodies have pointed out that there will be a shortage of light rare earths in the short and mid-term, while the shortage of medium and heavy rare earths will be in the mid and long-term. The combination of increased costs and shortages mean price rises are inevitable.

The world must ask if its low-carbon future may be limited by these “industrial vitamins”.

Liu Hongqiao is lead author in the China Water Risk report, Rare Earths: Shades Of Grey – Can China continue to fuel our clean and smart future?