Since 2015 investment in coal-fired power has increased in China, despite coal consumption falling.

This is a result of central government devolving powers to approve coal projects to local provincial governments, who are often keen to encourage new coal-fired power plants because they are important sources of tax revenue. The long-term fall in coal prices has meant that coal power plants are able to make more profits.

Last year, 64 GW of new coal-fired generation capacity was installed, with an additional 13.63 GW installed in the first quarter of 2016 – the highest figure for the same period in recent years.

There has been controversy over whether or not China should continue to invest in coal-fired power over the 13th Five-Year Plan period (2016 – 2021) ,as the country has committed to transitioning to an environmentally-friendly and sustainable model of economic growth.

Since April, both the National Development and Reform Commission, a central government planning agency, and the National Energy Administration, the agency responsible for formulating and implementing energy development plans, have issued orders for provinces to put on the brakes on approving new coal plants.

So what plans does China have for new coal-fired power generation in the future? And what is the best development strategy for coal-fired power and the electricity sector over the next 5 to 15 years?

In 2015 electricity use per person in China was just over 4,000 kWh, still significantly below the figure for developed nations. Developed nations fall into one of two main categories: Australia, Korea, the US and Canada have seen peak per-person usage of over 10,000 kWh – the US peaked at usage of 13,705 kWh per-person in 2005; Canada at 17,631 kWh in 2007.

Given China’s huge population, which is important when calculating China’s total energy demand, and advantages as a late developer, China’s peak should be no higher than the figure for Japan and European countries.

But economic uncertainties, increasing electrification, and China’s role as an exporter of energy-intensive heavy and chemical industry products to international markets means that it is difficult to predict what China’s peak per-person electricity use will be.

There are also big differences between China and the developed nations in the structure of electricity use. According to figures from the International Energy Agency, industry is the main consumer of electricity in China, accounting for 56.1% of total use in 2012, while the total for residential, commercial and public sector use was only 17.4%.

The situation in the US and Japan is different – there, residential, commercial and public sector use accounts for over 60% of electricity use. In absolute terms, China’s per-person residential use of electricity was one tenth of that in the US and 1/5th of that in Japan. The gap in commercial and public sector use was even larger – China’s per-person use here was 4% and 13% that of the US and Japan respectively.

Calculations by the National Centre for Climate Change Strategy, show that per-person electricity demand in China will rise up to 2030 under economic slowdown, moderate recovery and strong recovery scenarios (Fig 1). Per-person demand in 2020 will be between 4,600 and 5,400 kWh, and between 5,500 kWh and 7,000 kWh in 2030. 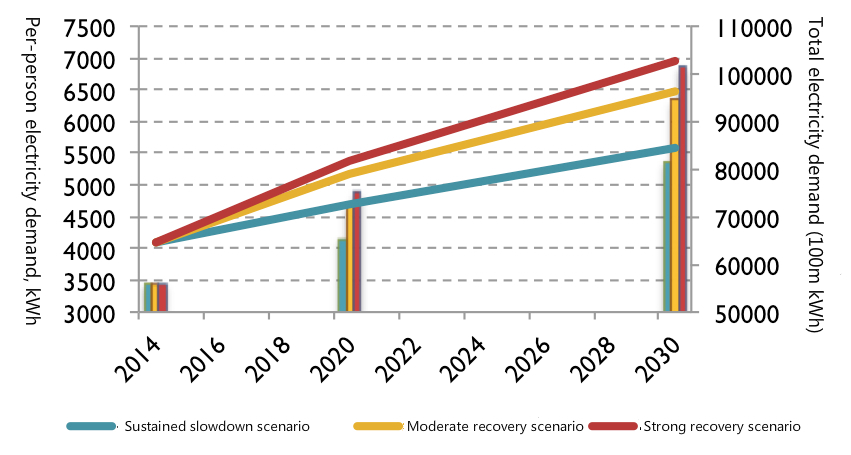 If average hours of utilisation per year are 4,900, that gives 4.8 trillion kWh of electricity supply per year. Under the economic slowdown, moderate recovery and strong recovery scenarios, energy demand in 2020 will be 4.8 billion, 5 billion and 5.2 billion tonnes-of-coal equivalent respectively. If the goal of drawing 15% of the energy supply from non-fossil sources is achieved, that means the non-fossil supply of electricity will be 2.4 trillion, 2.5 trillion and 2.6 trillion kWh per year respectively.

This means it would actually be possible to halt construction on some coal-fired power projects already under preliminary construction.

Similarly, if only projects already under construction are completed during up to 2021 ,and no new coal-fired power is brought online during the 14th (2021-2025) and 15th (2026-2030) Five-Year Plans, and we again assume that 9GW of inefficient coal-fired power is shut down annually, installed coal-fired power capacity in 2030 will be 900 GW.

If hours of utilisation increase to 5,300 hours per year, a benchmark commonly used by the Chinese power sector for when coal-fired power capacity is fully utilised, that provides 4.8 trillion kWh of electricity per year. Assume 20% of energy is drawn from non-fossil fuel sources and natural gas generation stands at 0.5 trillion kWh per year, and supply will be adequate to meet demand under the sustained slowdown and moderate recovery scenarios, and the shortfall in the strong recovery scenario is only 0.3 trillion kWh – 3% of total demand.

The above analysis shows that strict controls on coal-fired power – even zero expansion – still allows for China to meet rising demand for electricity.

So whether it is to control local air pollution and greenhouse gas emissions or to avoid wasted investment and surplus generation capacity, existing state policy on controlling coal-fired power should be strictly enforced with tough limits on new capacity during the 13th FYP.

The small 2030 shortfall under the “strong recovery” scenario could easily be met by increasing efficiency of electricity use and increasing non-fossil fuel sources of power.

Even if at the time there is a need for new coal-fired capacity to make up that 0.3 trillion kWh gap the decision can wait a decade – coal-fired plants can be built in two to three years, by which time the construction costs, electricity prices, reliability and practicality of natural gas and non-fossil fuel sources [i.e. wind, solar and nuclear] of electricity may have improved. In economic, environmental and efficiency terms, it is better to make that investment decision in 10 years’ time.