China has roughly one third of global installed wind energy capacity, while the US has 17%. Yet China uses less wind-powered electricity than the US. What is going wrong?

Energy market structures and politics limit the uptake of wind energy by the grid, according to renewable energy specialists. Two of them shared their views with chinadialogue to explain what is causing the problem, and put forward solutions.

chinadialogue (CD): What is China doing to promote wind energy integration from a policy standpoint and how does it rank globally?

Michael Davidson (MD):  China has put in place polices to develop wind energy since the 2006 Renewable Energy Law, but actual generation of electricity from wind falls short of expectations, given its high capacity. By 2010, many regions started experiencing high levels of “curtailment”; when wind energy is available but the grid operator instructs wind farms not to put all of it onto the grid, effectively wasting it.

Many countries with high levels of wind energy deployment experience curtailment. Texas, prior to 2012, experienced some of the highest rates outside of China, though they have now declined to near-zero (see diagram). As part of the joint US-China statements on climate change before the Paris talks, President Xi Jinping announced that the country would develop “green power dispatch” to improve wind integration on the grid building off existing integration policies. China has also pledged to obtain 20% of power from non-fossil fuels by 2030.

Ning Zhang (NZ): The government primarily supports wind power through subsidies and an acquisition mechanism. In 2003, when wind farms were first set up, the government set a price for wind energy that guaranteed a return on investment. As wind farms became more widespread in 2009, China enacted a “feed in tariff,” a guaranteed fixed purchase price at which the grid would buy electricity. The National Renewable Energy Fund pays the difference between the energy grid companies’ purchasing prices and the “feed in tariff,” to encourage wind energy use. 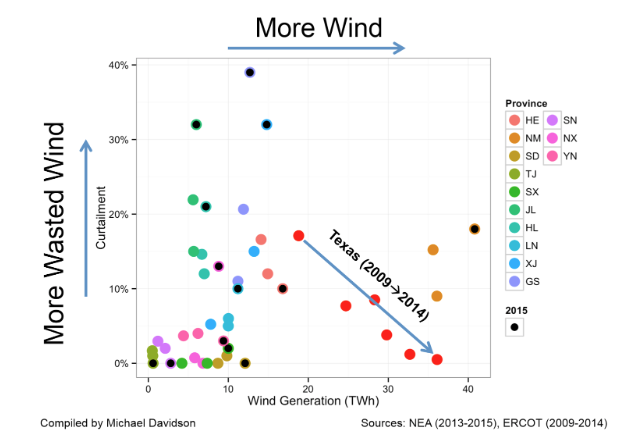 CD: What are the roadblocks to greater wind integration in China? What are the technical vs. the political challenges, especially those that are unique to China?

MD: Curtailment is often attributed to “technical” challenges, such as managing the variability of wind power, and mismatches between the location of wind farms, demand centres, and the grid.

However, many of these are better thought of as “techno-economic” challenges, because they are determined by the costs of addressing certain technical limitations. For example, the cost of a coal plant producing at less than its installed capacity, so that more wind energy can be integrated into the grid.

MD: For China, all of the traditional technical issues are relevant. But in addition, China’s electricity sector is operated under a number of other political constraints that exacerbate techno-economic challenges; we recently systematically went through these political-economic challenges of wind in a multiple country context. Because electricity prices are fixed by the central government, they do not respond to changes in supply, such as the availability of wind, or the costs of increasing and decreasing coal generation. Instead, the grid operator administratively determines the coal plant’s minimum output level in advance, which is typically high.

NZ: The technical challenges are that electricity cannot be stored on a large-scale, and generators fail to adjust in real time to changing supply and demand. One of our experiments, looking at two consecutive weeks of the energy grid in Inner Mongolia, revealed that wastage of wind energy mainly occurred at night.

Transmission congestion is another issue. At present, there is a great deal of abandoned wind power in the Jilin and Zhangbei areas because of network congestion.

The fundamental reason is that the national grid focused on the construction of ultra high voltage (UHV, 1000kV) networks, ignoring the construction of the 220kV and 500kV network connecting wind power to the grid. Currently, most of the bottleneck lies in the 220kV transmission line. Figure 2 summarises the main reasons for abandoning wind in several provinces. 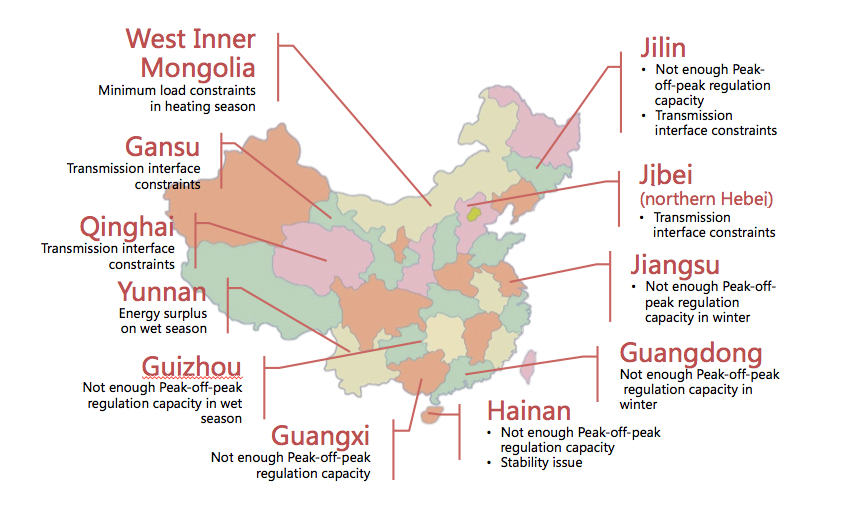 Lastly, there is a big problem with the market mechanism for integrating wind power. Prices, and output, for thermal, hydropower, and gas are formulated by the government. Wind and thermal prices are identical, and there is no penalty for wasted wind energy. As wind farms lack any price advantage over thermal power, grid corporations have no motivation to capture the excess capacity on windy days. Rather, energy dispatching centres usually set the maximum amount of wind energy a day ahead of time, at a level fixed quite low due to the variability of the wind energy supply.

CD: What would make the system more efficient?

MD: Proposed power sector reforms in State Council Document No. 9, revived in 2015 after a decade-long hiatus, highlight important avenues to raise efficiency and improve integration of renewables. Two proposals, reducing the amount of planned wind energy quotas and gradually allowing market-determined generation tariffs, raised in Document No. 9 and subsequent documents, are high on my list. Regulatory changes to bring grid companies more in line with international best practices are also important to eliminate conflicts of interest in dispatching power plants.

Recent work with colleagues showed that if China reduces the minimum output level of coal plants and makes more frequent and flexible scheduling decisions, wind alone could reach 14% of primary energy in 2030—almost three quarters of the way toward its 2030 target [of 20% of power from non-fossil fuels]. Adding on other low-carbon sources, this means China could raise its commitment to non-fossil deployment.

NZ: Changes are needed to allow for more flexibility. China’s wind power consumption needs a more flexible pricing mechanism, that allows for a spot market, a short-term market, rather than long term contracts. Allowing wind farms to make independent pricing decisions would let the price of electricity better respond to real time changes in supply and demand and increase their competitiveness.

CD: What are some of the things you feel are poorly explained in Chinese and US media discussions on China’s renewable energy grid integration that you think the public should know?

MD: One area that could be better explained is the effect of overcapacity. In one stark example, China built 51 gigawatts (GW) of new coal plants in 2015 despite a decrease in coal use in the electricity sector. Under a fixed price plan, the outcome is different: the quota must be spread out to more coal plants, there is pressure to raise the overall quota and a shrinking the space left over for wind. Stopping coal overcapacity could open up more opportunities for wind, though it will not address the other flexibility obstacles to wind energy.

NZ: Domestic media reports sometimes misunderstand the real cause of low renewable energy consumption. The root cause of the problem is usually not technical, but lies in the lack of market mechanisms. Often the finger is pointed at grid companies and the solution is simply that the government needs to strengthen policy enforcement of wind power consumption.

However, the government releases documents to encourage greater wind consumption every year, while wind curtailment remains a significant problem. It’s clear that publishing documents that force grid companies to accommodate wind power doesn’t work and that more flexible market, price, and scheduling mechanisms need to be implemented to create incentives for conventional energy, grid companies, and even consumers to accommodate more wind power.

Blowing in the wind