China has emerged as a leader in renewable energy. Investment soared from US$39 billion to US$111 billion in just five years, while electric capacity for solar power grew 168-fold and wind power quadrupled.  Actual renewable energy utilisation also grew. The total share of non-fossil fuels in primary energy consumption increased from 8.3% in 2010 to 12% in 2015, beating the country’s target of 11.4% and putting China well on track to meet its Copenhagen pledge to reach 15% by 2020 and Paris commitment to reach 20% by 2030.

Like other countries, China faces challenges in its shift to low-carbon electricity. One major problem is “curtailment,” which means power grids do not use renewable power even when wind and solar power plants are capable of producing it. Close to 10% of solar capacity remained untapped during the first half of 2015, while around 15% of wind power was wasted throughout the year. In regions such as Gansu, Ningxia, Heilongjiang, Xinjiang and Yunnan, the situation is a lot worse.

China’s Renewable Energy Law prohibits curtailment, but the problem persists, partly for technical reasons. However, a large part of the problem is not technical. In practice, fossil fuel power plants have priority over renewables, leaving less room for solar and wind power in a country with a large overcapacity of coal-fired power. There is also a lack of clarity on how the renewable energy integration mandate should be enforced. Better-designed and -implemented policies can help.

In the last two months, China’s government has thrown three punches to tackle the problem.

The central government has ordered 13 provinces to suspend coal-fired power plant approvals in the current pipeline, and another 15 provinces to delay new construction of projects that have already been approved, according to media reports. The government has also set up an on-going early warning mechanism to anticipate and discourage local decisions that may exacerbate coal power plant overcapacity in the future. Projecting to 2019, the government has issued a “red alert” for 28 provinces (in Chinese), asking local authorities to suspend approval and companies to reconsider investment. By curbing the development of new coal power plants, the dominant source of fossil fuel electricity in China, the government aims to prevent destructive competition with renewables.

Punch 2: Management rules to guarantee sale of renewable energy generation on the grid

The management rules issued in March set an annual minimum purchase guarantee for wind and utility-scale solar generation, securing the recovery of cost and reasonable profit for those projects. For the first time, the management rules stipulate that renewable energy power plants be compensated by fossil fuel plants that squeeze out their share of guaranteed purchase, making it costly for fossil fuel plants to generate electricity that should have come from renewable sources.

The directive also lays out roles and responsibilities for central and local regulators, fossil fuel and renewable power plants, and grid companies, providing the clarity needed for robust enforcement.

This is a decisive step towards the establishment of a green dispatch system that gives priority dispatching to renewable, efficient and low-carbon sources, which was called for by President Xi Jinping in a joint US-China presidential statement on climate change last September.

At the same time, the directive requires power companies to generate at least 9% of electricity from non-hydro renewable sources by 2020, almost doubling the generation share in five years. It also states the intention to develop a Renewable Energy Certificates trading scheme, where power companies can sell or purchase renewable energy as a way to comply with the above-mentioned requirement. 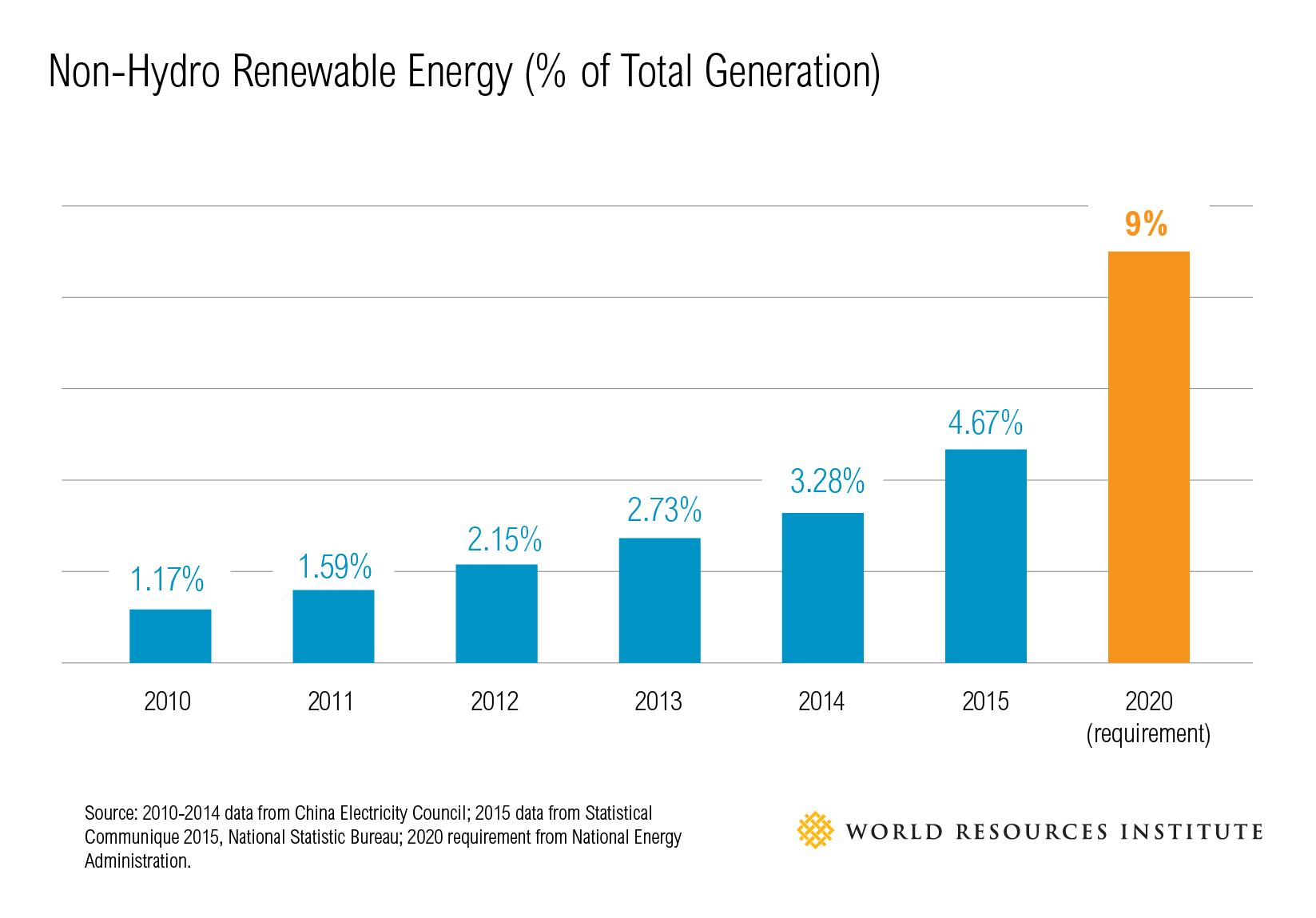 Taken together, the latest actions are a significant step to see that less renewable energy is wasted in China. They also reflect the government’s attempt to tap into the power of the market to address the challenge.

To knock down the problem, the government needs to closely monitor and evaluate the implementation and effectiveness of these measures, and if needed, strengthen them decisively. The government has shown an awareness of the need for stronger environmental policy enforcement, and has begun to take steps in this direction.

Going beyond the 2030 target, a group of China’s top energy experts concludes China has a fighting chance to achieve high renewable energy penetration, where renewable energy accounts for over 60% of primary energy consumption and 85% of electricity consumption by 2050. It can happen only if China implements aggressive policies to back renewable energy at every turn. The latest developments give reason to believe that China may be on the road to the heavyweight championship.

This article was originally published here by the World Resources Institute.