The burning of coal isn’t just cooking the planet through climate change, the fossil fuel is using large amounts of water in parts of the world where supplies of the most precious of natural resources are dwindling fast.

The report, which was commissioned by Greenpeace, finds that the mining, processing, washing and burning of coal consumes enough water to meet the basic needs of 1.2 billion people. 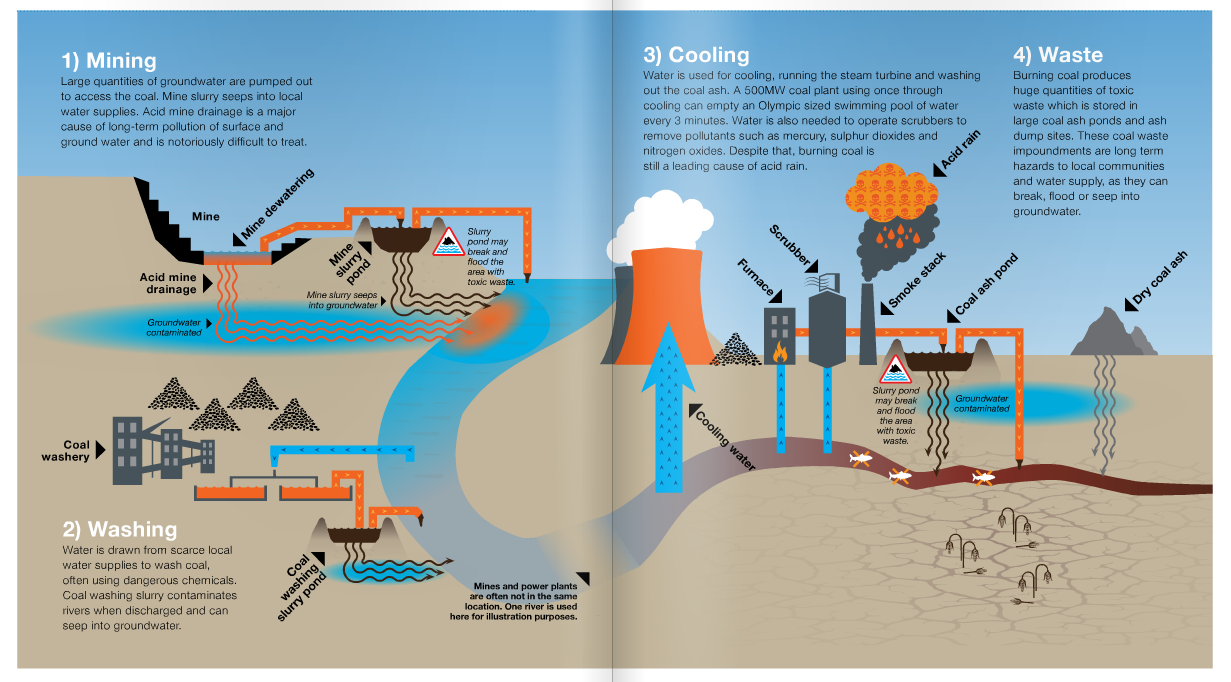 “The coal industry’s effects on water-deficient areas in the near future poses the most serious threat to water security around the world,” said the report, which was published on March 22 – ‘World Water Day’.

The report said by the end of 2013, a quarter of the 8,359 coal fired power plants already in operation, and a quarter of the 2,668 plants planned for construction, are estimated to be located in ‘over-withdrawal’ areas.

These are areas where humans are extracting water faster than supplies are able to regenerate, “posing a serious threat to local ecology,” the report adds.

The report: “Water Grab: How the coal industry is deepening the Global Water Crisis”, includes calculations by Dutch engineering firm Witteveen+Bos, and draws upon figures in the Platts World Electric Power Plant Database and the World Resources Institute’s Aqueduct project, research that Greenpeace said is the most comprehensive analysis on the subject to date.

In particular, the report focuses on those areas that are already enduring high levels of water stress because of climate change, population growth, intensive farming and industrial pollution. 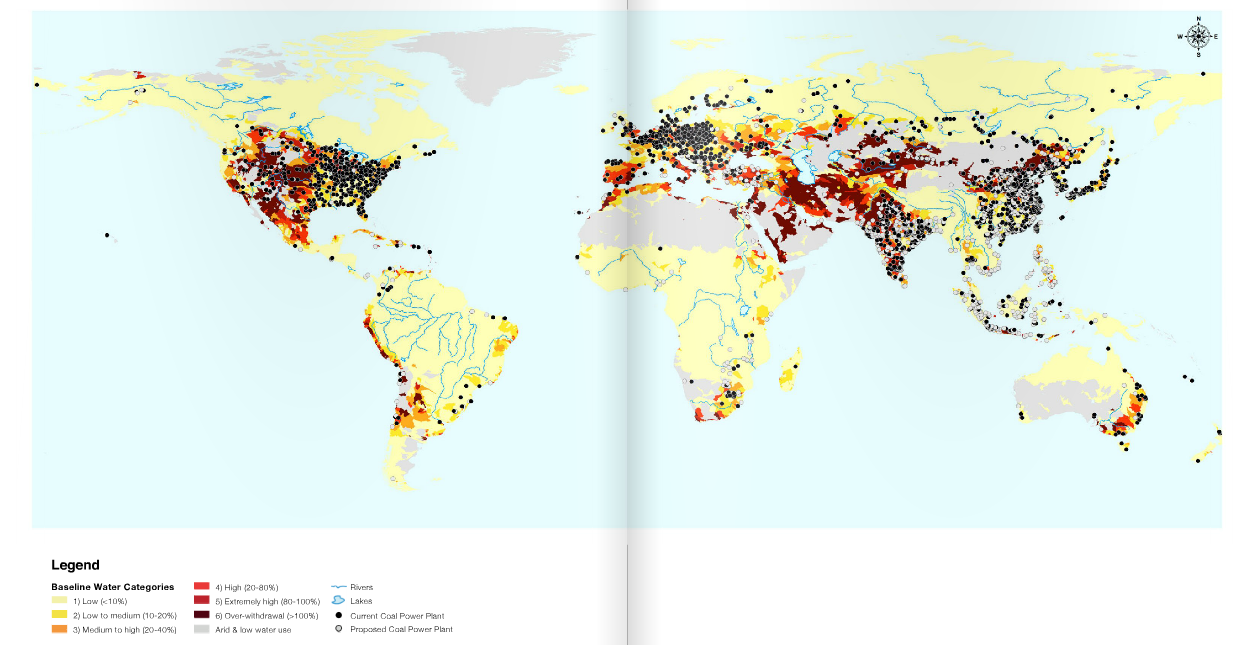 Black dots in brown areas, i.e. areas in which coal-fired power plants exist in areas of ‘water over-withdrawal’, are known as the most serious “red list” zones.

Top five countries that stand to gain the most from avoided water use if proposed power plants in their red-listed areas are not implemented. (Sorted by consumption) Source: Greenpeace

The report has put particular focus on China, which has the most serious conflict in priorities between the use of coal for power generation and the need for clean water.

The world is reliant on coal for around 40% of its electricity generation and fast-growing countries such as Pakistan, Indonesia, Vietnam and Thailand are expected to join Asia’s three largest economies China, Japan and India in becoming big burners of coal.

Although countries agreed to include 1.5C and 2C temperature targets in the Paris Climate Agreement signed in Paris last December, only a scaling up of national climate targets, and a major reallocation of energy finance, are likely to deliver a decisive shift away from coal in the power generation mix.

The report has highlighted water scarcity in China’s Yellow River Basin, which also has massive amounts of coal, with the contrast most prominent in the Kuye Basin, a major tributary.

Coal extraction has caused the river’s natural flow to fall sharply, damaged an increasingly fragile ecology, and worsened soil erosion. Outside the flood season, water is so polluted it can’t be used for agriculture. Despite the worsening environmental crisis in the region, the area’s coal industry is still expanding.

Greenpeace said the Kuye Basin’s case study is illustrative of a wider problem in China, where coal plants in red-list areas use water equivalent to the basic needs of around 186 million people, while planned plants in these water danger zones would require water that could supply 100 million people. 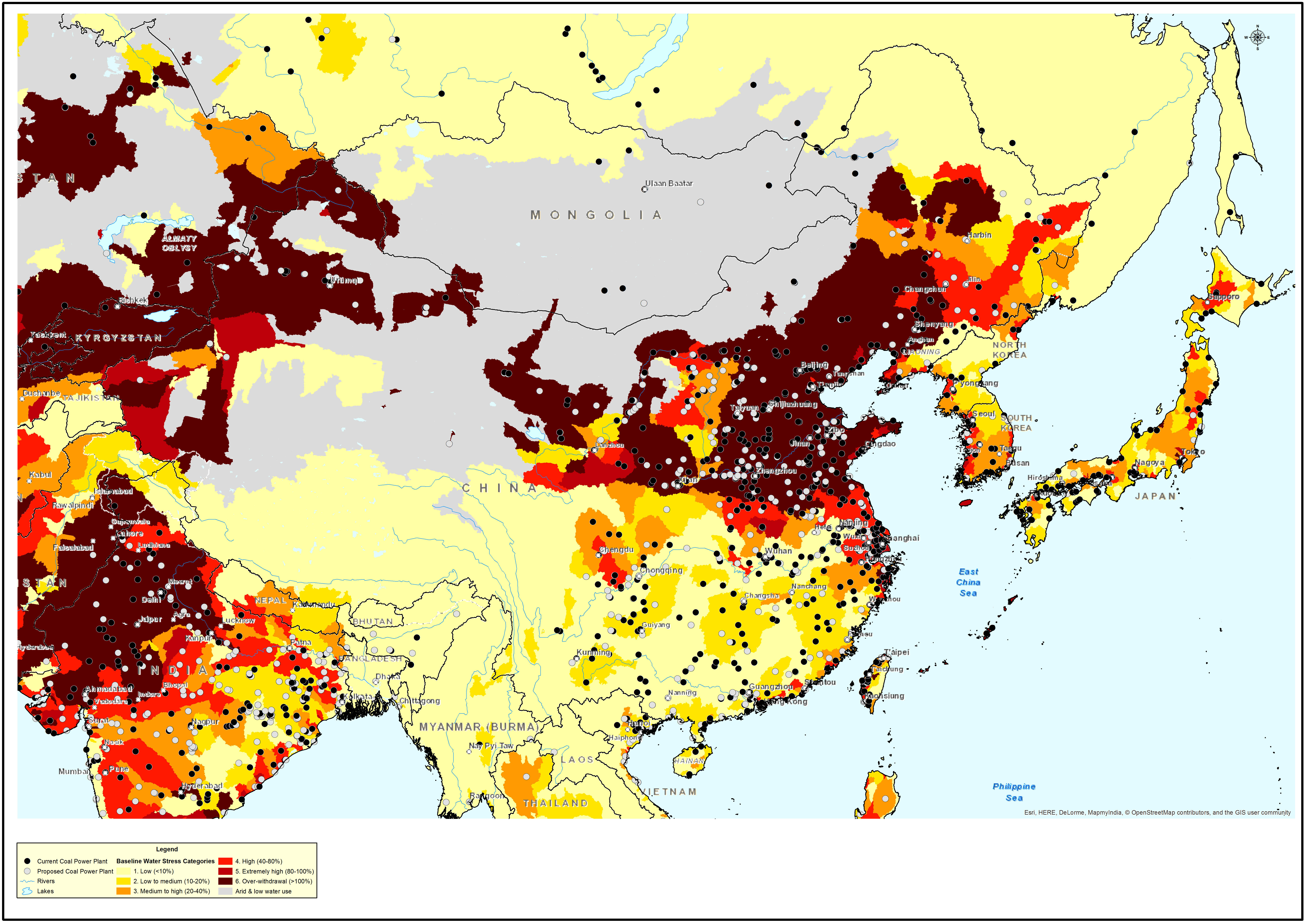 To reduce the coal industry’s demands on water use, Greenpeace says water management should be taken into account in all regional planning, and major restrictions placed on coal industry projects when their water demand exceeds the availability of water.

A phase-out of coal, a long-held goal of environmental groups, should be prioritised in areas of water stress, the report adds. Policymakers should also opt for renewables, which use much less water than coal.

Carbon trading in China unlikely to go national by 2017