China's motorists are now paying more for their petrol than drivers in the US. While the price of crude oil has fallen globally, in China, the government has responded by introducing a floor price on fuels equivalent to US$40 a barrel.

The floor price, introduced in January, has prompted a great deal of bellyaching on social media, and highlighted the competing priorities of China's leaders when it comes to the incentives provided to producers, consumers in industry and the general public.

Fossil fuel subsidies come in the form of government interventions such as direct payments, indirect tax breaks and tariff exemptions, often determine energy prices for consumers. They also are used to cushion costs and puff up revenues for producers of energy.

China's government also points out that low oil prices discourage the conservation of resources, leading to worsening air pollution and hindering the transition to electric vehicles.

The online debate about fuel pricing in China as part of a broader international agenda around the reform of fossil fuel subsidies and how they are reported by finance and energy ministries, an issue that will be discussed at the G20 summit in September in Hangzhou.

It has been seven years since the G20 leaders met in Pittsburgh, when they first committed to “rationalise and phase-out inefficient fossil fuel subsidies that encourage wasteful consumption, over the medium-term”.

Since then, international bodies have been required to submit data on their fossil fuel subsidies phase-out efforts. China, however, has yet to make any disclosures.

As well as being chair of this year’s G20, China is the world’s biggest energy user, with fossil fuels accounting for 88% of that consumption. China’s lead on fossil fuel reform is critical to multilateral efforts to reform energy subsidies. 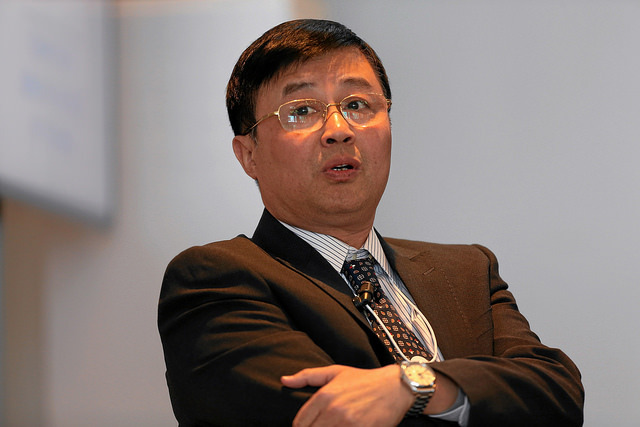 chinadialogue (CD): Fossil fuel subsidies are back on the G20 agenda, what do you expect to be the big talking points?

Lin Boqiang (LBQ): Fossil fuel subsides are a complex issue, and while the G20 framework has produced a few reports, there haven’t been any actual commitments on how to phase them out. Fossil fuel prices have plummeted over the past two years, reducing the pressure on governments to address subsidies.

CD: In China, the collection of data surrounding pricing, taxation and funding systems lacks transparency. Should China move to a more transparent or Western approach?

LBQ: Fossil fuel subsidies are generally delivered either through pricing, taxation, or funding. In the past, energy prices were very high, so the government needed to keep prices down. Subsidies and taxation are two sides of the same coin. Taxation is a negative subsidy – while subsidies encourage consumption, taxation discourage it.

In the future, I hope the authorities will make the subsidy system clearer and more transparent.

In the future, energy prices should be market-set and more transparent, with cross-subsidisation eliminated as far as is possible. If subsidies need to be retained, let’s make them transparent. When you get an electricity bill or a receipt from the filling station, you should be able to see at a glance how subsidies and taxes have contributed to what you pay.

CD: Would you say China’s main task in coming years is to set up a transparent mechanism?

LBQ: Yes, so even if subsidies remain after reforms, the public knows what they are and that they are there. If they know what the subsidies are then there will be more accepting of future price rises. Meanwhile, the government can calculate more clearly the costs and benefits of its policy decisions.

I think we have a good opportunity for pricing reform now. Generally, the public aren’t too concerned about how you take their money – they’re mainly concerned about how much you take. So the current low prices mean you can make changes without increasing prices, and that reduces the obstacles to reform.

The question is how do we use the opportunity of weak energy prices to better manage energy prices, and introduce tools that can be used in the future to implement energy policy decisions. It’s about enabling people to see what is happening inside the 'black box'.

Governments can use weak fuel prices to phase out subsidies

True cost of subsidised fuels “amounts to 6.5% of global GDP”

G7 agrees to ditch fossil fuels by end of the century