Even after losing a battle in the Thailand Administrative Court, a group of Thai villagers are not giving up. They have filed appeal after losing the first community-led lawsuit in the region to challenge a large dam on the Mekong river.

On 25 Dec 2015 the Administrative Court ruled in favour of five Thai state agencies accused of ‘illegally’ signing an agreement to buy power from the 1,200-megawatt Xayaburi dam in Laos – the first dam to be built on the mainstream of the Lower Mekong river.

The case was brought by 37 Thai villagers living in eight provinces along the Mekong river. They argued that the state agencies signed the agreement without assessing the transboundary environmental and health impacts of the project, furthermore the agencies had failed to carry out prior consultation required under the Thai Constitution.

The dam, they say, will cause significant damage to the river’s ecosystem and will displace millions who rely on it for their food security and livelihood. Allowing the Xayaburi dam to be built will also set a precedent for the 11 other dams planned on the Mekong. 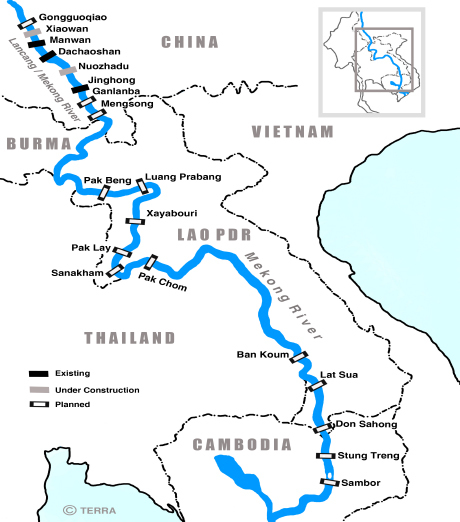 One of the plaintiffs, Niwat Roykaew, travelled over for more than 12 hours from his home village in Chiang Khong district of Chiang Rai province to reach the capital in order to hear the court’s ruling.

“We are disappointed…the judicial system can’t bring about justice for the people,” said Niwat. “They give priority to economic growth while leaving people incapable of protecting their rights to manage natural resources sustainably.”

Thai villagers living along Mekong river have seen irregular water flows over the past twenty years since the first of six Chinese mega-dams was built on upper Mekong river (where it is known as the Lancang).

Farms along the riverbank in Thailand have been flooded — sometimes overnight — by the sudden increase of water flow released from dam reservoirs. Fish catches have also declined, which many people suspect is caused by dams blocking migratory fish routes.

Although villagers have raised concerns about the negative impacts of Chinese dams upstream, in 2010 the Lao government and Thai developer Ch. Karnchang began to build the Xayaburi dam in on the lower Mekong.

The project, funded by six Thai banks, is the first of 11 dams — two in Cambodia, nine in Laos — to be built on the lower Mekong.

Construction began even before the four countries of the Mekong River Commission (MRC) — Cambodia, Laos, Thailand and Vietnam — had agreed to the project. The MRC was set up to promote cooperative management of the river basin, but this hardly seemed like cooperation.

Thailand remained silent. But Cambodia and Vietnam argued that Laos had broken international law and the MRC’s 1995 Mekong Agreement, which prohibits implementing projects while consultations are still underway.

Cambodia and Vietnam called for the construction to be suspended until the transboundary environmental impacts had been assessed, since the livelihoods of over 60 million people downstream of the dam were at risk. Laos, on the other hand, insisted the project was legal, claiming that construction only started in 2012 and earlier work was merely preparatory.

A year after construction started, the Electricity Generating Authority of Thailand (EGAT) signed a power purchase agreement with the Xayaburi Power Company — shares of which were held by Thai and Lao companies including the Ch. Karnchang — to buy 95% of the dam’s electricity. Prior consultations were arranged in each Mekong country in parallel with ongoing construction.

The Thai villagers argued that since the dam construction broke the MRC agreement, the power agreement was illegal.

The Thai villagers first filed the lawsuit against five Thai agencies— including the EGAT, the National Energy Policy Council, the Ministry of Energy, the Ministry of Environment and Natural Resources and the Thai Cabinet — in the Administrative Court in 2012.

The case was dismissed, forcing the villagers to file an appeal with the Supreme Administrative Court (SAC) which made the ground-breaking decision to accept the case in 2014 — the first time a court in the Mekong region has recognised the transboundary effects of dam.

The case was returned back to the Administrative Court, which ruled in favour of the Thai state agencies. The copy of the court decision stated that the dam’s prior consultation meetings were arranged in  four provinces in 2011 — before Laos announced the official launch of construction — the results of the meetings were published on the MRC’s website and the draft power agreement on government website. Therefore, the court concluded, the Thai state agencies had performed their legal duty.

The villagers, however, say the prior consultations were not conducted properly and information was not made accessible to them. Channarong Wongla, a plaintiff living in Loei province downstream of the Xayaburi dam, attended the second consultation meeting in his home village. He felt that the official came to notify the villages of the dam plans, not to listen to their opinions.

He said that very few villagers could access the internet and the state agencies didn’t inform them that the information had been released. “The court only cares about the results of the prior consultation process written on official papers, but it doesn’t look into activities within the process,” said Channarong.

The plaintiffs filed a final appeal on January 25 and the ruling will be decided in the next two years.

The Xayaburi dam case sends a clear message that countries within the Asean Economic Community (AEC) need to pay attention to the transboundary impacts of investment.

Chinese and Thai companies are also involved in another controversial project, the Hatgyi dam on the Salween river in Myanmar’s war-torn Karen state. Thailand was the second largest investor in Myanmar behind China in 2014, with over US$10 billion.

As more investment projects take off, concerns about the unregulated transboundary impacts will continue to grow.

“Thai law can’t catch up with this flow,” said Sor Rattanamanee Polkla, a lawyer representing the plaintiffs and coordinator of the Community Resource Centre. “It can’t handle irresponsible Thai investors beyond the national territory even though their headquarters are in Thailand. The law must look at the regional perspective.”

In the Xayaburi dam lawsuit, the plaintiffs cannot sue the dam operators with a civil suit until after damage has already occurred, so they launched an administrative suit against state agencies.

Back home after the court ruling, Niwat continues to raise awareness about the need to protect the Mekong river.

His local network, the Rak Chiang Khong group, has recently opened the ‘Mekong River School’ to educate the younger generation about the value of local ecology and culture.

Thai villagers are also trying to set up the ambitious ‘Mekong People’s Council’ to bring together villagers in lower Mekong countries and strengthen their voice.

They realise that battles with other dam projects lie ahead.