Nuclear power has had a makeover. What was once seen as a futuristic source of limitless energy has been reframed as a response to global warming, an ideal solution for countries looking for a continuous source of low-carbon power. But who are these countries?

At the moment 31 different nations operate nuclear power plants (see page 14 here, with a total of 388 reactors, and before Fukushima, most planned nuclear power plant projects were in Asia and Eastern Europe, extending a trend from earlier years.

Industry lobbyists the World Nuclear Association suggests that nuclear power capacity worldwide is increasing steadily, with more than 60 reactors under construction in 13 countries. They say that eight countries are either planning to build for the first time (Belarus and United Arab Emirates), have signed contracts (Lithuania and Turkey), or have some plans to build (Bangladesh, Jordan, Poland, and Vietnam).

In contrast, the more independent World Nuclear Industry Status Report describes a declining trend, with annual nuclear electricity generation reaching a maximum of 266 GW in 2006 and dropping to 235 GW in 2013 – with 50 fewer operating reactors than the peak in 2002, and total installed capacity comparable to levels last seen two decades ago. This decline is also confirmed in BP’s recent Energy Outlook. 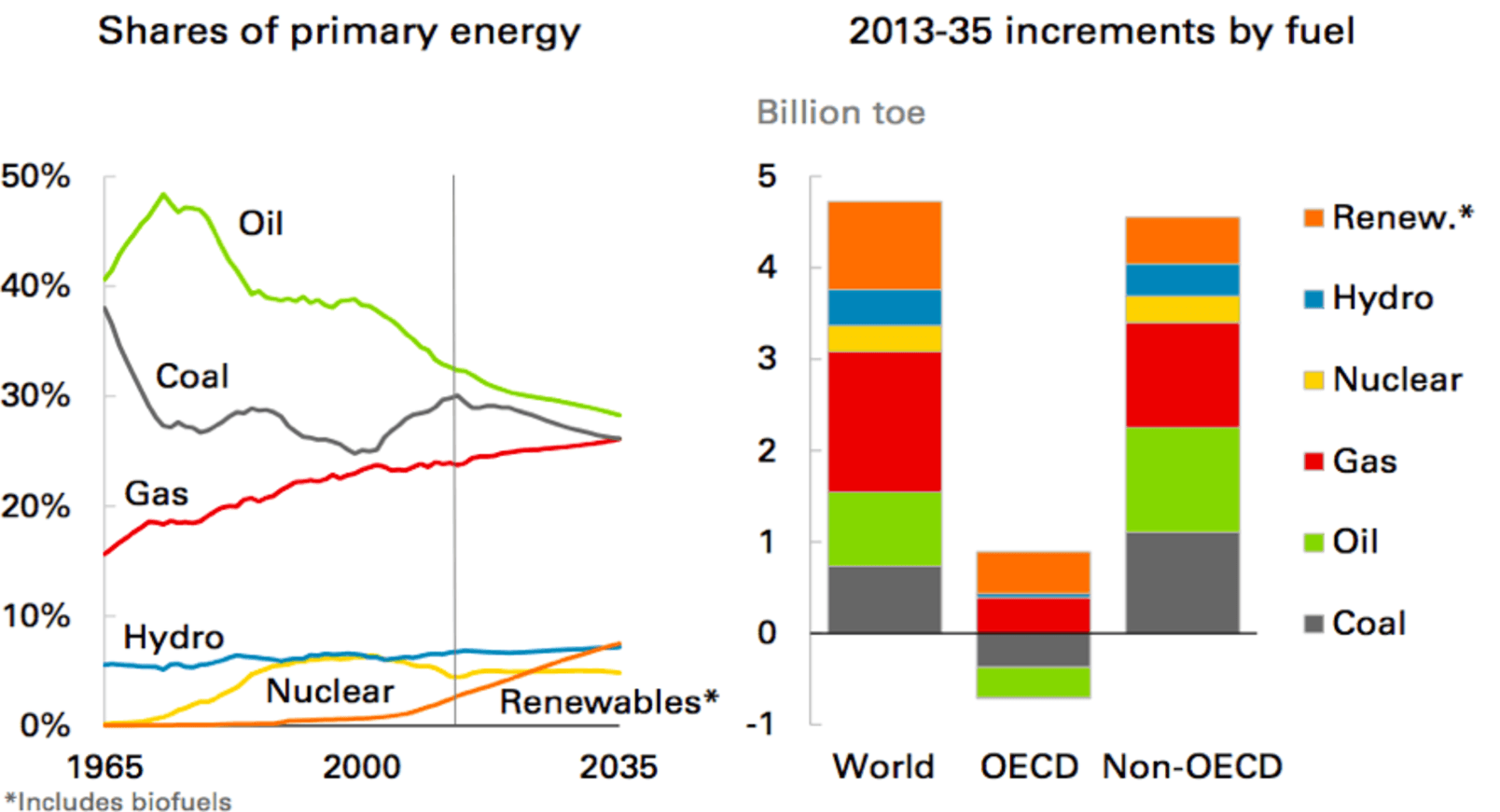 Oil and coal are set to decline but renewables not nuclear will take up the slack. Click to enlarge. BP energy outlook 2035

In terms of new build, 67 reactors are under construction worldwide with a total capacity of 64 GW. For the nuclear industry this at first sounds promising, but then “under construction” doesn’t necessarily mean it will be finished any time soon – work first began on one reactor opened in Argentina last year back in 1981.

It’s true to say that the risk to people, the environment and to the future of nuclear energy from another major incident is still very real, and reactor accidents from “beyond design-base” cascading events, such as the Fukushima disaster and all other major nuclear accidents, are the single largest financial risk – far outweighing the combined effect of market, credit, construction and operational risks. The thing is, in trying to “design out” these accidents, reactors have become much more expensive, complex, and hence, difficult to build on time and on budget.

Of the 67 currently being built, eight reactors have been under construction for more than 20 years, another for 12 years; and at least 49 have significant delays. For the remaining 18 reactor units, either construction began within the past five years or the reactors haven’t reached projected start-up dates, with construction projects in Finland and France very many years behind schedule. 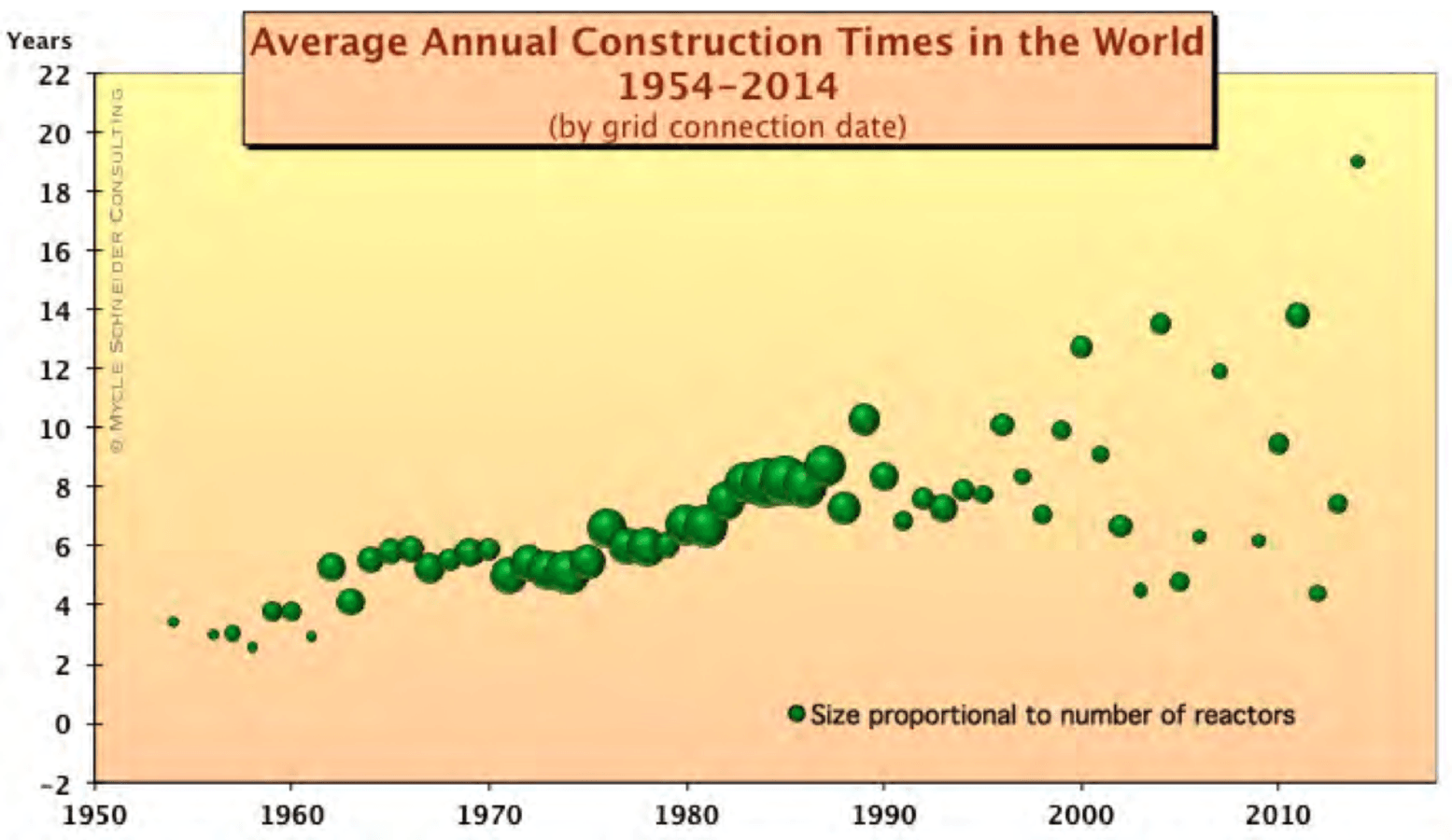 Note: bubble size is equivalent to the number of units started up in the given year. Click to enlarge. MSC based on IAEA-PRIS 2014

The Russian state nuclear corporation Rosatom is building in Russia, China, and Belarus, and claims more than 20 export reactor orders in Iran, Turkey, Vietnam, Bangladesh, Jordan, Hungary, Finland, Egypt, India and South Africa. But there are questions about whether it’s got the finances and supply chain resources to carry out more than a small fraction of these – most depend on Russian finance, hit hard by the recent downturn, and Rosatom is already facing delays in its homeland due to lack of resources.

Meanwhile, the World Nuclear Status Report shows that China has 28 reactors under construction – 42% of the world’s total new-build – with 21 reactors (17 GW) in operation, which in 2013 provided 2.1% of the country’s electricity. If all their reactors under construction come online before 2020, this would bring the total to 49 reactors. To put this into perspective, in 2013 alone, China installed 12 GW of solar, a threefold increase over 2012.

And recent events have challenged China’s plans for nuclear. There’s been the usual construction delays, cost increases, doubts over the siting of reactors in provinces inland, and questions over safety and regulatory oversight – and, remarkably, just last month, significant faults were found in the reactor pressure vessels already installed in the Areva EPRs atTaishan 1 and 2. 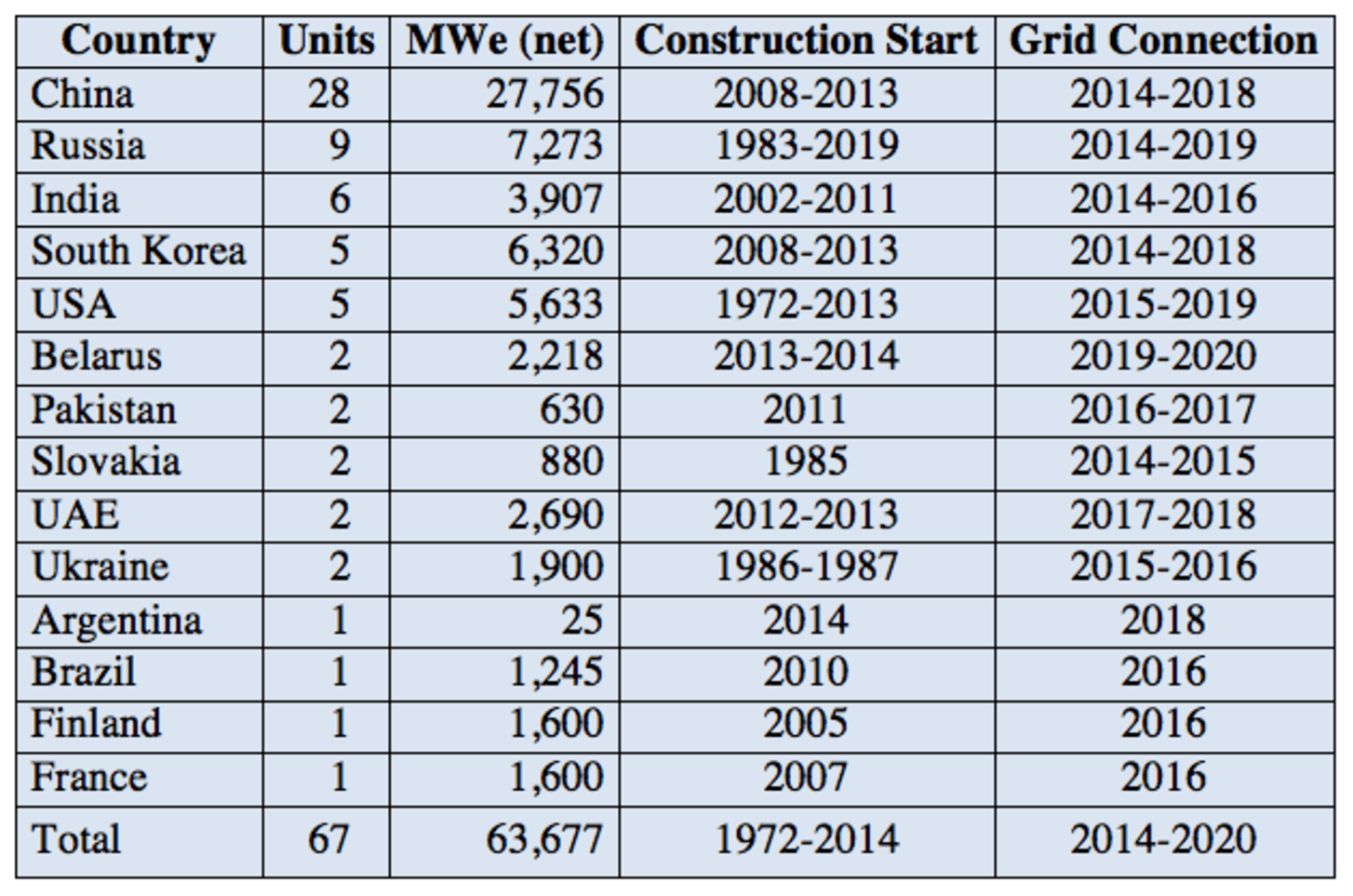 While nuclear carries very real technical and regulatory risk – construction cost represents a key challenge. New builds will only go ahead after government guarantees public subsidies, including long-term power purchase agreements. This is because the private sector can’t afford to build new nuclear plants themselves. The reality is that nuclear new builds are high-value, high-risk projects with a marked tendency for significant delay and delay claims, cost growth and investor risk.

For example, in Finland, their nuclear corporation TVO is pressing a €2.7 billion compensation claim for delays to the Olkiluoto EPR nuclear power plant. Perhaps amusingly, the French nuclear corporation Areva is in turn demanding €3.5 billion from TVO. The project’s turn-key price was €3 billion in 2005 and the current estimated price stands at €8.5 billion, with a construction time of 13 years and rising. And just recently, TVO has dashed Areva hopes of building any more EPRs in Finland.

So the general post-Fukushima situation in the EU implies there will be limited construction in the coming decade. Although new builds are still planned in Finland, France and the UK – Italy and Switzerland have cancelled plans for new reactors, Belgium has confirmed a nuclear phase-out, and eight EU countries have signed a declaration that nuclear power is incompatible with the concept of sustainable development.

At the heart of the nuclear question are differing views on value for money, foresight and responsibility. Huge long-term investments are needed and it’s clear there are critical social, environmental and economic decisions to be made.

Germany, Europe’s dominant electricity user, has made its choice. Its decision to phase out nuclear power by 2022 and to instead invest in renewables, efficiency measures, grid infrastructure and energy storage, will prove significant for both European and international energy policy.

This article is part of a series on nuclear power published by theconversation.com. An original version of this article can be found here

China unlikely to be shining light for nuclear